The Abbott and Costello Show 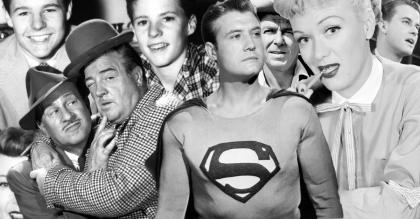 Bud and Lou find jobs in Fields' drugstore and nearly wreck the place. This episode opens with the famous "Jonah and the Whale" routine.  Remind Me

When Lou gets a toothache he attempts to get arrested so he can receive free treatment while incarcerated.  Remind Me

Lou damages Mrs. Crumbcake's waterpail and she drags him into court claiming .79 cents in damages. In jail, Lou's crazed cellmate becomes enraged whenever he hears "Niagara Falls."  Remind Me

Bud and Lou head off to the Biltmore Hotel near Phoenix for a vacation. "Hertz U-Drive" and the "Pack-Unpack" routines are performed.  Remind Me

Lou throws a birthday party for himself, but nearly poisons his guests when he puts ant paste on his hors d'oeurves instead of anti pasto. Bud throws him out and Lou consoles himself by ordering a giant decorated cake.  Remind Me

When news arrives that Lou's uncle has struck gold in Alaska, Bud and Lou plan to help him spend it.  Remind Me

Bud and Lou join the Army, where they recreate their routines from the feature film 'Buck Privates.' "Drill Routine" and "Dice Game" are performed.  Remind Me

Bud and Lou participate in Hillary's charity bazaar, raising money with the "shell game." Lou blows his money at the kissing booth.  Remind Me

Hillary will inherit a castle if she spends one night there. Bud and Lou come along with her for protection and Lou is scared out of his mind by frightful encounters.  Remind Me

Lou sleeps all day but can't sleep at night. Bud takes him to see a psychiatrist. Eventually Bud checks him into a sanitarium for a night's rest. "Crazy House" is performed.  Remind Me

Bud and Lou visit a couple of restaurants. In one they become involved with twin waitresses. In the other, Lou has a battle with an oyster.  Remind Me

Lou attempts to impress Hillary and her father with his musical abilities. While pretending to perform, Bud falls asleep and ruins the scheme.  Remind Me

Bud coaches Lou on running for public office, a political campaign that ends with Lou delivering a disastrous speech in a neighborhood park.  Remind Me

Lou and Stinky agree to settle their differences with a wrestling match. When Stinky becomes ill, his little brother Ivan the Terrible takes his place.  Remind Me

Ep : Getting a Job

Bud and Lou are hired to deliver hats to the Susquehanna Hat Company on Floogle Street and encounter several lunatics on the way. Also, Stinky attempts to kill Lou by backing him into traffic. The "Loafing" routine is performed.  Remind Me

Mike the Cop tells Lou that he must have a license for his pet chimp. But Lou accidentally applies for a marriage license.  Remind Me

While shopping for Hillary's birthay present, Lou nearly destroys a grocery store. Later, at her party, Mr. Fields becomes upset about the noise.  Remind Me

Lou is a contestant on a TV quiz show where he wins a pack of bubblegum. Their neighbor slips on a piece of gum and takes them to court.  Remind Me

Bud and Lou pay $90 for a car and head for Las Vegas, where Lou takes part in a violent game of billiards. The "mudder/fodder" routine is performed.  Remind Me

Bud and Lou attempt to help an old lady who has been evicted. They raise $300 and she uses the money to bet on a racehorse.  Remind Me

Bud is taken away to an old actors' home where he and Lou perform their famous "Who's on first?" routine.  Remind Me

Mike the Cop helps Bud and Lou enroll in the Police Rookie School, where Lou blows up the gymnasium while playing with a hand grenade.  Remind Me

When Bingo gets sick, the whole gang travels to Africa to find his parents.  Remind Me

Working as a door-to-door cookware salesman, Lou prepares a dinner for his friends in hopes of moving some product. However, his honest culinary efforts are met with disaster.  Remind Me

To pay back rent, Bud and Lou attempt to wallpaper an apartment. Later, as waiters in a restaurant, they brawl with hoodlums.  Remind Me

Lou's eccentric opera singing uncle comes to stay with the boys for a couple of months.  Remind Me

A wealthy society matron pays Bud to attend a formal reception and impersonate the Duke of Gluten. Lou comes along pretending to be his cousin, the Earl of Waldo.  Remind Me

Mr. Fields takes out an insurance policy on Lou. Later, Bud takes Lou on a hunting trip, and Lou suspects Bud and Mr. Fields have plotted to kill him for the insurance money.  Remind Me

Bud and Lou are pest exterminators mistaken for psychiatrists when they attend to Mrs. Featherton's "aunts."  Remind Me

When a heavyweight prize fighter named Killer thinks that Lou is having an affair with his wife, Bud attempts to get Lou trained and fit in a gym.  Remind Me

Bud and Lou accidentally buy a crate of rollerskates, not knowing that they have stolen diamonds hidden inside.  Remind Me

Lou accidentally lands himself and Bud roles in a Civil War melodrama.  Remind Me

Ep : From Bed to Worse

Bud and Lou attempt to plant a backyard garden in order to win a cash prize offered by a civic group.  Remind Me

Lou wins a $1,000 dollar prize pretending to be Mr. Fields. He then has to get Mr. Fields out of the way so he can collect it.  Remind Me

Lou is in love with a girl he has never met. As a gag, Bud and his friends convince him that he has already married the girl. The woman who poses as his wife then makes his existence miserable.  Remind Me

Bud and Lou land jobs as efficiency experts, and are assigned to restrain their client’s daughters from spending money. The young women, however, get the boys to buy them expensive dresses and take them to a casino, where they end up in a brawl.  Remind Me

When Lou wins a car, Bud sells it to buy a cheaper one, using the profits to try to finance a vacation in Flint, Michigan.  Remind Me

When Lou finds out he will inherit $10,000 provided that he has a wife, he tries to marry a former girlfriend—who is dating a man named Bonebender Brodsky.  Remind Me

When Mr. Fields is just about to evict the boys, Bud convinces him that Lou's Uncle Ruppert is a millionaire and Lou is the sole heir. Complications arise, however, when Mike the Cop begins to believe that the visiting uncle (Lou in disguise) has been murdered.  Remind Me

After receiving his private eye diploma from the Watchdo Correspondence School, Lou helps a friend locate some valuable bonds in a haunted house.  Remind Me

Lou receives a tax refund check for $1,000,000. He takes the check to a bank and demands cash. He is subsequently followed by home by crooks.  Remind Me

Lou is mistaken for a crook named Dapper Dan and is forced to take part in a robbery.  Remind Me

Bud and Lou unwittingly take jobs as armed bodyguards for a couple of hoodlums and assist in a bank robbery. They use their share of money to pay their rent, and later try to get it back from Mr. Fields' safe.  Remind Me

Bud and Lou help Mr. Fields, who is being threatened with a lawsuit. Lou poses as a Texas millionaire to help discredit the complainant.  Remind Me

Bud and Lou's beautiful next door neighbor uses Lou as a decoy to help break up with her mobster boyfriend.  Remind Me

When Bud and Mr. Fields help Lou put together a prefab house in order to impress his fiancée and her parents, a jealous former boyfriend sabotages their work.  Remind Me

A mad scientist's experiment convinces Lou that he is indestructible.  Remind Me

When Bud and Lou judge a beauty contest, pressure is applied to sway their votes.  Remind Me

Bud and Lou want to take two sisters on a date but their father convinces the boys to put an antenna on his roof instead.  Remind Me

This is a TV special narrated by Milton Berle and featuring "Slowly I Turn," "Herd of Cows," "Floogle Street," "Who's On First" and other classic comedy sketches.  Remind Me