eastern (on most MeTV stations)
Add to Favorites  Remind Me
Inspired by a real-life man, dressed-up dandy, gambler and lawman Bat Masterson (Gene Barry) roams the West charming women and defending the unjustly accused. His primary weapon was his wit and cane rather than his gun.
Share 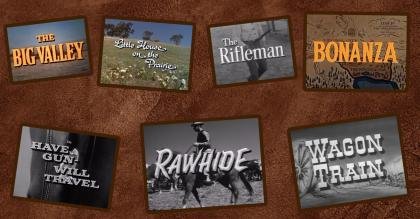 Which of these classic TV westerns came first? 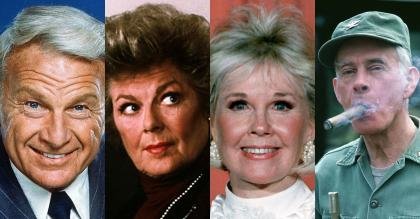 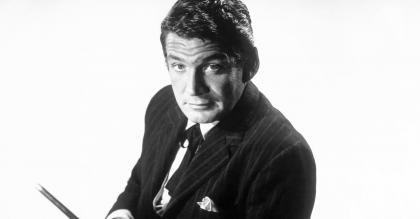 Can you guess the missing lyrics in the Bat Masterson theme song?
View More

Which of these classic TV westerns came first?

Can you guess the missing lyrics in the Bat Masterson theme song? 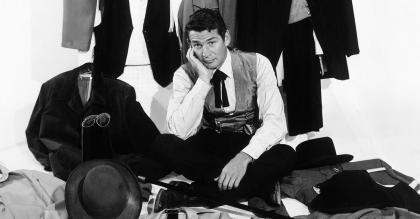 Gambler and saloonkeeper, Big Keel Roberts, "owns" a lively, lucrative Arizona town. The "fastest-Cane-in-the-West," Bat Masterson comes to town on behalf of a friend -- also a saloonkeeper -- whom Big Keel is crushing. Things get rougher and rougher be  Remind Me

Tough, hot tempered Sergeant Foley orders Bat Masterson out of Swan Valley. Reason: Bat has become interested in Foley's girl Molly Doyle, a dance-hall beauty. Although his life is threatened, Bat refuses to leave - and clashes with the redoubtable Fole  Remind Me

Sometime-cattleman Bat Masterson wins a herd in a poker game. Ruthless rancher Roaul Cummings blocks his route to the Cheyenne stockyards. As he prepares to give battle, Bat finds a determined troop of other enbattled ranchers backing his play.  Remind Me

Laura Hopkins calls to Bat Masterson for help. She and others are herding horses and breaking them for the sale to the army. When turmoil leads to gunfire, the inevitable happens: a stampede of wild horses.  Remind Me

Sportsman Bat Masterson admires a ferocious and promising young boxer. When he sees the young man being mishandled by an unscrupulous manager, Bat entices the manager into a poker game and wins the fighters contract.  Remind Me

Hunting guide Bat Masterson takes on a party bent on hitting bear. As the expedition moves forward, Bat realizes that three of his companions are fugitives from murder and robbery charges in other states.  Remind Me

Ep 7: A Noose Fits Anybody

Joe Quince tries running Jan and Woody Larkin out of town. Joe wants the store they inherited from their father, but they won't sell. In the midst of this danger, Bat Masterson agrees to teach Woody how to handle a gun.  Remind Me

Ep 9: The Treasure of Worry Hill

Influential John Conant calls Bat Masterson to Cheyenne. The most adept card player of the frontier, Bat is able to test the rumors that Steve Haley - Conant's daughter's fiance - is a poker cheat. Between the tension of gambling and the excitement of ro  Remind Me

Between the scorching desert and ruthless trail pirates, wagon train after wagon train are destroyed. The unique method the pirates use to lure the wagons astray, puts Bat Masterson on the track of a monsterous conspiracy.  Remind Me

Trail boss Bat Masterson runs afoul of an illegal toll as he leads a drive to the rail head. Between the local politics of Protection, Kansas and the local feed dealer, Bat finds unexpected action.  Remind Me

Ep 15: One Bullet from Broken Bow

At the request of General Phil Sheridan, heroic Bat Masterson challenges renegade Chief Stone Calf. Purpose of the challenge: Rescue the Rafferty sisters from Stone Claf's war party which kidnapped them.  Remind Me

The Sheriff of Mason City insists that gambler Bat Masterson join the Protective Gamblers' Association. This little group seems unsavory to Bat - he refuses and is thrown behind bars by the sheriff who controls the Association.  Remind Me

Bat Masterson, frequent target of gunfights, falls into the sights of Harry Varden's trigger man. Varden, biggest saloonkeeper in Dodge City, fears that Bat plans to relieve him of some property - and he figures his only recourse is to eliminate Masterso  Remind Me

Bat Masterson is relieved of $10,000 in a daring riverboat hold up. After the clever band of robbers works its way systematically through the entire passenger list of a Missouri boat, Bat goes into action.  Remind Me

Bat commands one of the forces in a railroad war. Mace Pomeroy, frantically attempting to beat General Moran in laying tracks through a canyon, offers Bat a small fortune to help fight Moran. Bat, however, decides for Moran and ends up in a historic gan  Remind Me

Morganville's bully-boy, Dan Morgan - to his great misfortune - cheats Bat in a poker game. Bat executes a bold plan to retrieve his money: He discovers the names of Morgan's other victims - and sets out to settle scores for them as well as for himself.  Remind Me

Champion of Justice Bat Masterson and lovely Lorna Adams race against time and the executioner in an unusual adventure triggered by a stagecoach hold up. Bat and his pretty companion are stranded enroute to the State Capital where Lorna's hurrying with e  Remind Me

Ep 29: The Death of Bat Masterson

In a community of reformed law breakers, Bat Masterson finds himself- reluctantly - their bank president. In his keeping are their savings and townsmen's right to continue and enjoy their new way of life.  Remind Me

Daredevil Bat Masterson risks his scalp on an expedition to buy buffalo hides in dangerous indian country. Luke Simes, the man originally assigned to the job, had made some unflattering remarks about Bat's method of dress. As a result, Simes suddenly fi  Remind Me

Bat Masterson resorts to duelling pistols to expose the cowardice of self-styled "Colonel" Marc James, Confederate deserter. Bat ends the "Colonel's" career as gambler and blackmailer, to pay a debt of gratitude to Mr. Chancellor, whose daughter Abby is  Remind Me

In a determined stand on the side of Justice, Bat Masterson puts himself between a trigger-happy sheriff and a reformed gunman who is involved in a recent killing. Bat, unlike the sheriff, believes that every man is entitled to be heard in court, before  Remind Me

Ep 40: No Funeral for Thorn

A true friend to his friends, Bat Masterson rushes to the bedside of dying Thorn Loomis. He's caught in the cross fire when two battling for the privilege of being named county seat. Side by side with his "dying" friend, Bat tries to outgun the Wichita  Remind Me

You can't be sure that Bat goes to the local opera house at St. Joe, Missouri because he's a music lover. Reason for doubt: an ex-girl friend Dora Miller - whom Bat finds as attractive as ever.  Remind Me

Man-of-High-Prinicple Bat Masterson takes a firm stand when two beautiful girls and their father are blackmailed. The scene of the activity is The Lady Luck, one of Sacramento's gayest gambling casinos.  Remind Me

Peacemaker Bat Masterson calls a halt to a deadly gun-shooting feud between the Clementses and the Bassetts. Bat claims the right to interfere because of money owed him by the Bassetts.  Remind Me

Versatile Bat Masterson turns lawyer to fight the tyrannic rule of Phil Hood. Hood uses the law to his own ends, stifling the freedom and life of the town. Bat's mission: rescue the town.  Remind Me

It's Bluegrass thoroughbred versus Western quarterhorse when General Moran wagers a railroad that his Bluegrass racer can beat Colonel Pierce's mount. Suspicions grow in the general however, and he asks Bat Masterson to help him.  Remind Me

Ep 48: The Canvas and the Cane

Ep 53: Flume at the Mother Lode

Ep 54: Death by the Half Dozen

Kidnappers force Bat Masterson to deliver a ransom note. The victim, a young bride, is saved but Bat has a job of rounding up the outlaws.  Remind Me

Sometime silver-miner Bat Masterson believes the "proof is in the mining." Suspecting a hoax is being perpetrated on the citizens of Leadville, Bat buys into a mine of questionable worth. The outcome: he wins the unstinted gratitude of the entire boomto  Remind Me

On a seemingly routine trip to investigate a shortage in a small town bank, Bat Masterson finds a dead man, makes the acquaintance of a larcenous dog, and is very nearly killed himself. He subsequently meets a most charming lady. With the dog's help he  Remind Me

Bat Masterson finds himself doing a most unwelcome "land office business." Accepting a parcel of wasteland from Lisa Truex in payment for a debt, he decides to turn it into a grave yard. He subsequently finds that through hanky-panky at the Land Office,  Remind Me

It's cane against guns when Bat Masterson steps them into a range war. Having chosen his side of the fight, he's not responsive to being urged at gunpoint to become "turncoat" to the people he favors.  Remind Me

Ep 59: The Disappearance of Bat Masterson

Bat Masterson rides the trail alone into the gun of the Yaqui Kid toward almost certain death. The Kid, a heartless scoundrel, has killed a friend of Bat's. In pursuit of the killer, the sheriff is murdered and the posse fails. So Bat has determined t  Remind Me

It's the rifle-squad at dawn and his back to the wall for Bat Masterson, because of a strange adventure involving nonexistent gems. Bat's been "conned" into trailing some supposedly missing jewelry and ends up in Mexico - That is, nearly ends up.  Remind Me

Boxing-Fan Bat Masterson, arrested enroute to a championship bout, finds himself arraigned before infamous "fining judge," Malachi Brody- a formidable and vindictive man of the law.  Remind Me

Stagecoaches disappear when Bat Masterson executes a plan to thwart road agents. The highwaymen's quarry is silver bullion being transported in the stagecoaches. Bat's ingenius plan to frustrate the thieves is an early milestone in crime busting history  Remind Me

A horse thief hijacks a herd of cavalry stock from horse trader Bat Masterson. Bat's problem: find and deliver the horses - and bring the criminal to justice.  Remind Me

Underworld character Mace Gunnison takes over the town of Liberal, Kansas and appropriates Bat Masterson's name and identity. As proprietor of "Masterson's Arcadia Club," Gunnison fleeces townsmen and trail-hands at crooked games of chance and with thir  Remind Me

Bat Masterson is "held up" for an exorbitant fine when he rides into the town of Paradise, Colorado. The charge: carrying fire arms. In Paradise, the Law says "no guns" which puts the "man with the cane" at a great advantage.  Remind Me

In the search for the young man to whom he is carrying a bequest, Bat Masterson buy information from a cattle baron. The man fails to give him value received and Bat is misled and cheated - but not for long.  Remind Me

Not everybody knows somebody who has smuggled a whole castle into the United States...but Bat Masterson knows one: Captain Angus MacLeod. The "old salt" has brought in a Scottish Castle, stone by stone, and set it up in San Francisco.  Remind Me

Ep 78: The Rage of Princess Anne

Ep 80: Murder Can be Dangerous

Ep 83: Last of the Night Raiders

Ep 87: The Lady Plays Her Hand

Ep 90: The Price of Paradise

Ep 94: A Lesson in Violence

Ep 96: Terror on the Trinity

Ep 99: No Amnesty for Death