Where To Watch Shop Store Contact
Home / Stories / We first met brilliant Charlotte Rae as Sylvia Schnauser on Car 54, Where Are You?
nostalgia

We first met brilliant Charlotte Rae as Sylvia Schnauser on Car 54, Where Are You? 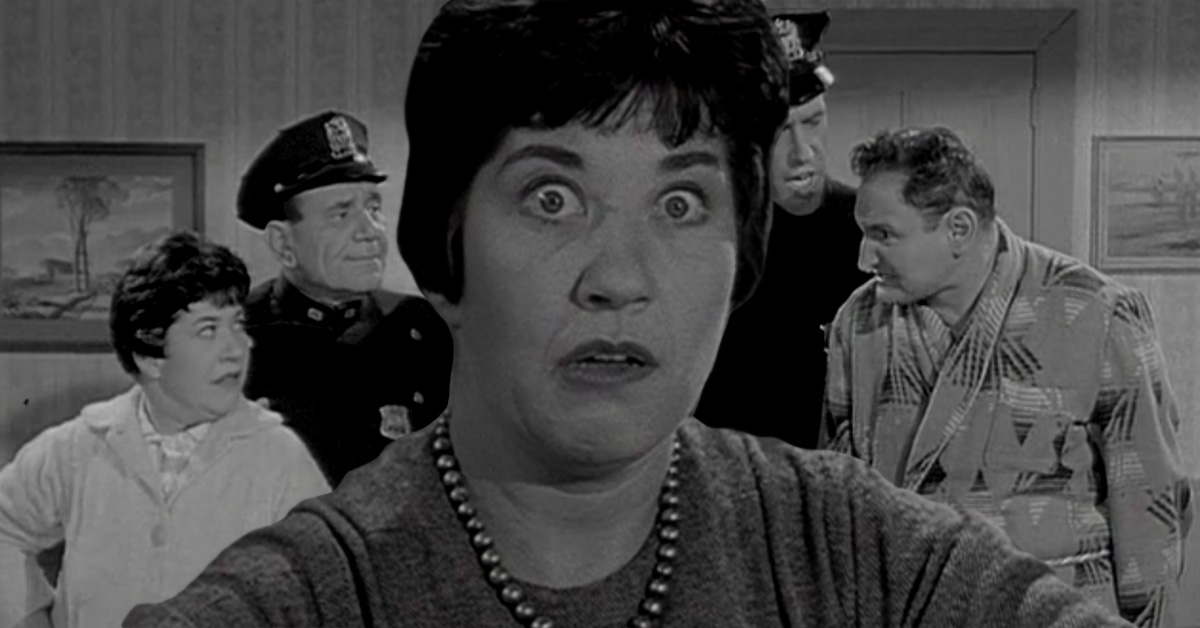 In the 1970s, TV audiences knew Charlotte Rae as the motherly redhead figures on hit series like Diff'rent Strokes and The Facts of Life. On both shows, she was a series darling, playing hard and soft, and steering our favorite family show stars to make tough choices, not with a sigh but with confidence, good humor and a hearty laugh. But before we saw Rae's remarkable finesse portraying characters in the muted shades of '70s TV, viewers met her first in black and white, on the much earlier slapstick sitcom, Car 54, Where Are You?

On air in the early '60s, Car 54, Where Are You? starred Joe E. Ross as Officer Gunther Toody and Fred Gwynne as Officer Francis Muldoon, following two cops patrolling the Bronx and all the hilarity that came from the characters they dealt with along the way. Rae first appears in the series as a bank teller in the episode "Get Well, Officer Schnauser," where her eyes first grow wide on the show when Muldoon unwittingly passes her a stick-up note instead of his deposit slip. This appropriate introduction to Rae would foreshadow all the many surprises the actress had up her sleeve to entertain viewers soon on the show, once she joined the crew as a permanent cast member. 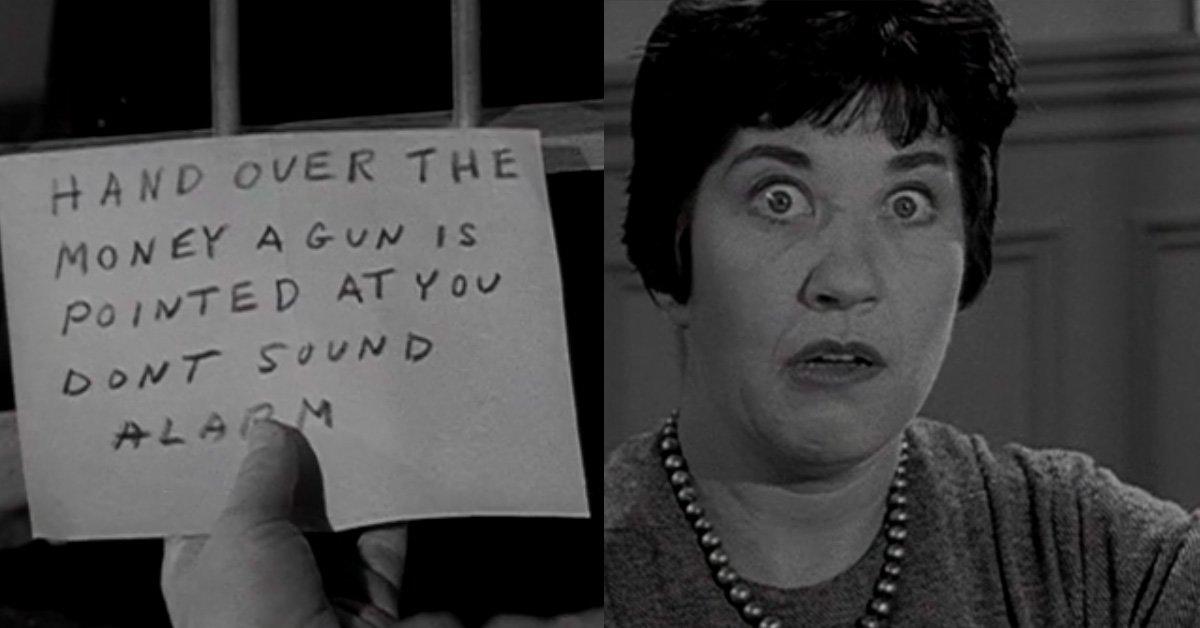 Seven episodes later, Rae became a permanent fixture on Car 54, Where Are You?, playing Sylvia Schnauser, wife to Leo Schnauser, played by the uproarious Al Lewis. Rae had no trouble holding her own across from the noted comedic actor. We first see Rae as Sylvia Schnauser humming as she cleans her home with care, a black pillbox hat on her head and sleeves on her housedress rolled up. The gag is that she’s the wife who remembers where every little thing is. The shoe Leo lost years ago. The stem of a pipe that once broke off. Leo says with pride, “I’m just showing you off” as she answers him with the precise location for every item he's seeking. But then, the twist lands when he asks for a painting he's brought home that she's discarded, and it seems that the wife who always keeps everything has tossed out the one thing her husband needs. Rae gets a big laugh. These laughs would continue coming throughout her career.

In every appearance, Rae heaped more dimension on her character, start with her next appearance, when she’s a weeping housewife, theatrically bemoaning how her husband has disgraced them because the couple’s loud arguments have the neighbors summoning the police every Thursday, some of TV's most jokey “domestic disturbances.” In a house robe, Rae tearfully tells Toody and Muldoon, she’d just been trying to say two words to Leo all night! The comedy of her character walked that delicate line between humor and drama that the actress later became celebrated for on series like Diff’rent Strokes and The Facts of Life.

But perhaps our favorite episode was “The Courtship of Sylvia Schnauser,” which opens up with Leo kissing a young bride and proclaiming he hasn’t kissed a beautiful girl in years. Rae as his wife stands beside him, exuding every bit of sass in her deadpan response with a convincing sulk. The humor piles on when she repeats the same sunken body language when she catches the bouquet. 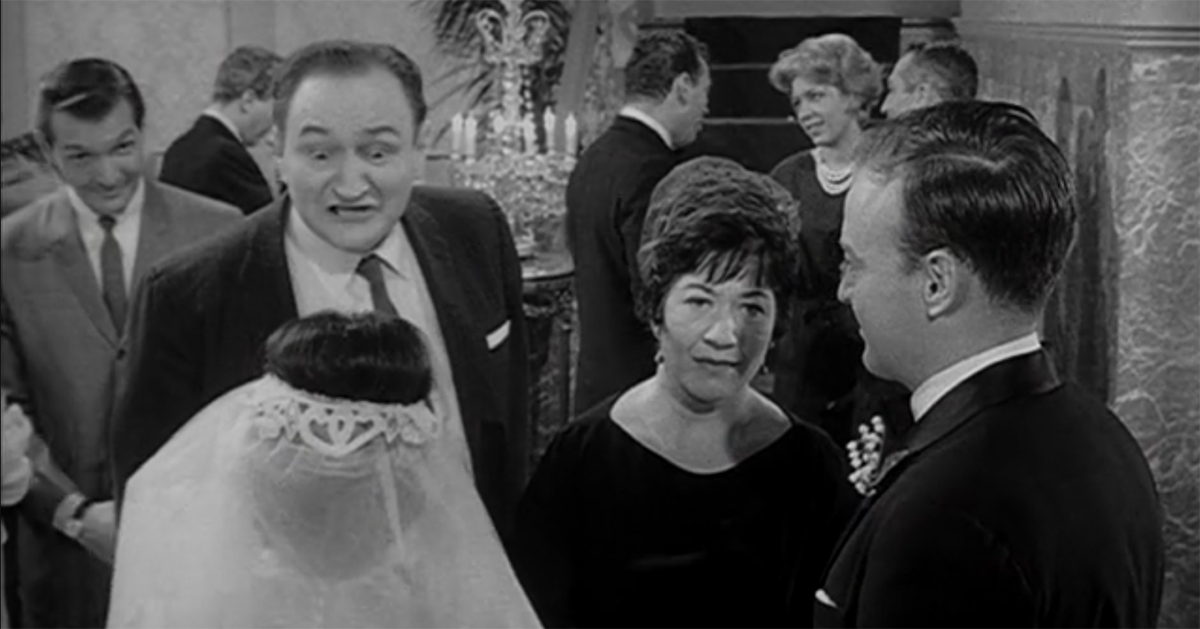 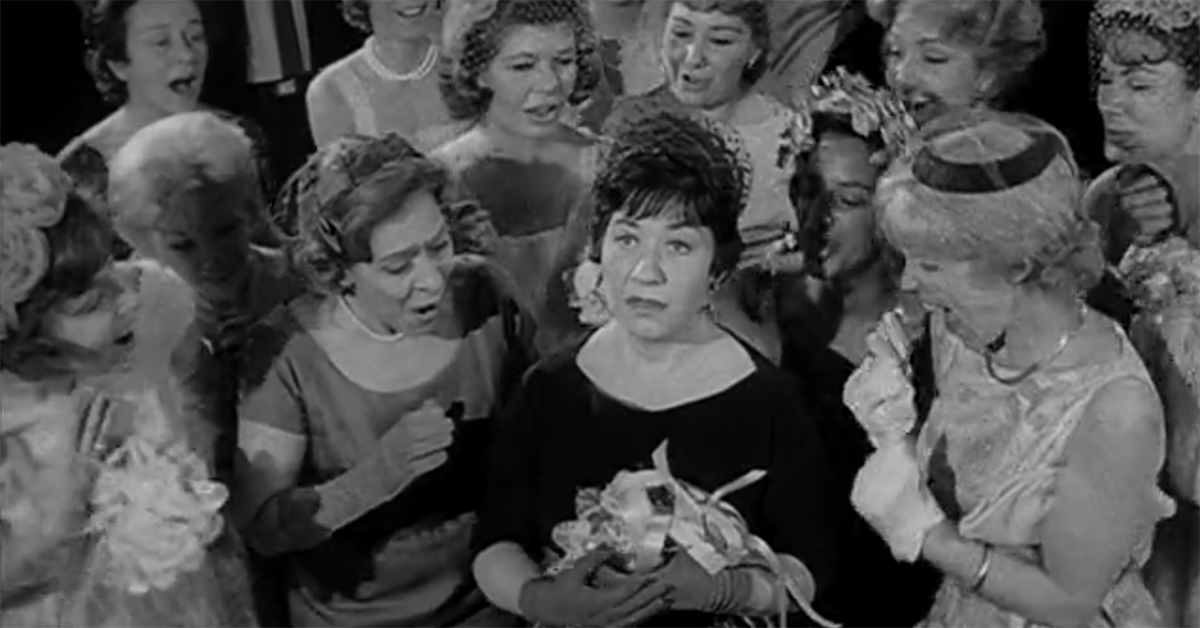 The tensions between the Schnausers builds comedically throughout the episode, until Sylvia at last decides to leave Leo. His response? A “Ho Ho Ho” as all the neighbors listen in at their door. The slapstick of Car 54, Where Are You? took the best physical comedy elements of stage plays and silent films and turned these wild gestures into one of TV's most original zany sitcoms, punched up by masterful players like Charlotte Rae.

Through the rest of her time as Sylvia Schnauser, Rae’s character only became richer, in one episode a snooping meddler, in another she’s overjoyed at being selected as a cookie spokeswoman on TV. The antics of Car 54 were many, and over Rae’s 11 appearances, she held her own with hilarious co-stars Joe E. Ross, Fred Gwynne and Al Lewis. Her final episode was a glorious sendoff, “The Loves of Sylvia Schnauser.” In it, Sylvia is invited to do police work, helping Toody and Muldoon set traps to catch con artists. The con artists are posing as book publishers, and Sylvia’s posing as a romance writer. It becomes an extra mystery that no one’s sure in the episode if the book Sylvia describes throughout the episode is really real. 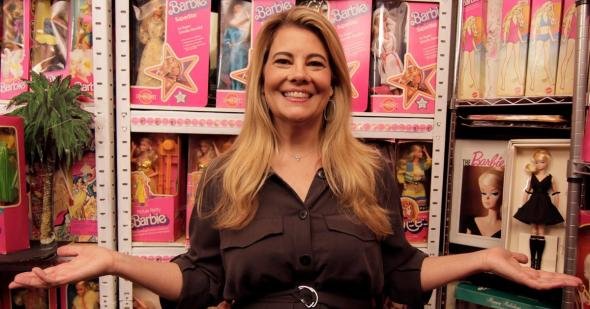 Toys
Collector's Call Web Extras: A million-dollar Barbie collection
Are you sure you want to delete this comment?
Close

rikkirat 7 months ago
Charlotte Rae was an absolute hoot on Car 54… what a great cast and such an underrated and hilarious show.
Like Reply Delete

Or drag a file here to upload
texasluva 33 months ago
There are many problems such as MeTV and others have to get around. Many cities share MeTV with news, weather and even Democratic/GOP primaries and caucus. Many stations are owned by other entities. Programming is based on demand, costs and what other stations are showing. Then scheduling them accordingly over certain time periods. If you are showing the same TV series you really do not want to show them at the same hours because of competition. Then have to get advertisers to buy into certain time slots. Which brings up my own personal rant on an ad that I just refuse to watch or listen to because it is so annoying. Liberty Mutual. The high shrill that reverberates not only in your brain but whole house. The constant beeping that I reach for my remote faster then Speedy Gonzales-Click! Wait one minute-Click! It's still on no way! Id rather have the road runner beeping any ole time. I know. Money talks and that's the way it is. I do love the promotions MeTV does with their program tv characters (awesome) but LM has got to go. Well at least from my view . Lucky that my MeTV station is all MeTV. With a DVR I can tape TCM and other programming while I am away or another station. Those that do not get all the programming and are upset its not MeTV its the affiliates that own things in their areas. So if it's not Car 54, Where Are You.? It's MeTV Where are you? Feel lucky we get many things we love in life. It's never perfect for everyone.
Like (1) Reply Delete 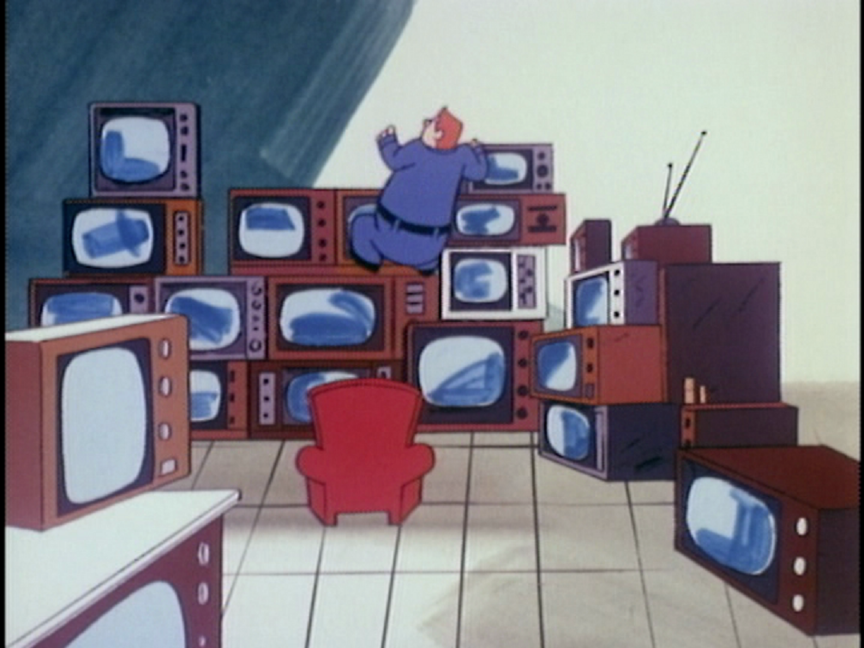 Pacificsun RobCertSDSCascap 34 months ago
I hate to harken back to the good old days, but they really were, at least TV wise. When I first came up here you should've seen the MeTV schedule!! A goldmine of treasures overnight. I'd stay up through 4am because I knew they wouldn't be around forever. It took awhile but the programming style changed over time from almost anything you'd like to see. To specialty channels and block scheduling. H&I is a good example. If you like "Monk" you can watch 8 hours of it straight. And so it goes 5 days a week for 5 different action dramas. But at least it's dependable and they don't ruffle their viewers with many changes. I think only 3 are upcoming shortly. While MeTV viewers used to be in a rage whenever they overhauled their schedule. I just wish they wouldn't load up 2 consecutive timeslots, such as they're doing for Stooges. That just doesn't seem fair.

Oh well. We're lucky to have MeTV at all.

Thanks for reading my stream-of-consciousness, LOL!!
Like (1) Reply Delete

RobCertSDSCascap Pacificsun 34 months ago
You're welcome!
I agree with you.
I remember when Cartoon Network aired mostly classics. Less and less
over time. Then Boomerang came along and aired many classics. Now
Boomerang airs very few classic cartoons.

Catman 34 months ago
There's a holdup in the Bronx
Brooklyn's broken out in fights
There's a traffic jam in Harlem
That's backed up to Jackson Heights
There's a scout troop short a child
Kruschev's due at Idlewild
Car 54 ... where are you?
Like (4) Reply Delete

Pacificsun Catman 34 months ago
Not a badly crafted theme song huh, being that we can recite it word for word 50 years later!! LOl!
Like Reply Delete

Pacificsun 34 months ago
There is such difference between today's actor in comedy and the people in these classics. You look at the scripts and they're pretty goofy. I mean who's going to substitute a holdup note for a deposit slip?? They were only words and concepts on paper right, and yet the story was brought to (hilarious) life by such talented unique personalities. Rae created "Sylvia" just by how she delivered the dialogue, and more so, by all her unforgettable facial expressions! There might've been another "Sylvia" true, but like the story says, she was the one who brought a richness to her presence in that role. Pure "Heart & Soul" applying a certain suspension of belief, as to who any of these actors were pretending to be!

MeTV -- you should alternate Car 54 with the Munsters once a month, following Dick Van Dyke, for a very fun way to end the weekend's "Sunday Funnies!"
Like (3) Reply Delete

Pacificsun RobCertSDSCascap 34 months ago
Which station did Car 54 go to?
Like Reply Delete

gene Jeffrey 33 months ago
why should they, they would rather run mash and andy griffith over, over,over and other again, either you watch or turn the channel.
Like (2) Reply Delete