Where To Watch Shop Store Contact
Home / Stories / See inside the factory where Lucy and Ethel trained for iconic "Job Switching" episode
Did you know?

Was See's Candies a staple of your childhood?

Was See's Candies a staple of your childhood? The candy company has been around since 1921, which means every generation has had a chance to sample their sweets. By the 1930s, they had 30 shops operating with their biggest sellers their creams and, of course, the truffles that many TV fans now associate with a show that's got just as much sticking power as See's gooey treats: I Love Lucy.

Apparently, the ability to uphold a legacy is not the only thing Lucy has in common with the candymakers, either. It was actually a See's Candies factory that helped train Lucille Ball and and Vivian Vance for their iconic scene in one of their sitcom's best-loved episodes, "Job Switching." It's the episode that many refer to as "the chocolate factory" episode and that TV Guide called I Love Lucy's "chaotic, crowning moment." 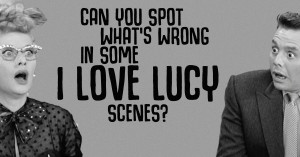 Can you spot the one thing wrong in these 'I Love Lucy' screen shots?

The exact factory that helped prep the pair of TV pals for their big scene is still located in Culver City, California, on La Cienaga Boulevard.  LAist.com posted photos that lets you peer inside the magic of that specific location where Lucy first learned to roll and wrap truffles (or perhaps more accurately, learned how not to roll and wrap truffles).

In case you were wondering if either of the women who trained Lucy and Ethel onscreen in the episode came from See's Candies, the answer is no, but that doesn't mean they didn't pull in any legit chocolatiers. The stone-faced Amanda Milligan shown on the line beside Lucy and Ethel in the photo above was a candymaker that Desi Arnaz is said to have discovered at a farmer's market.