Little Joe was a little scared to ask Candy to weep.

July 10, 2019, 9:18AM By MeTV Staff
On Now
Ben Cartwright wrestles a broken Candy Canaday on Bonanza
Up Next:
Share

David Canary is such a tough guy that he actually scared the daylights out of Bonanza series creator David Dotort when he auditioned for the part of Candy Canaday. His intimidating presence won him the role that day, and on episode after episode, it was on full display in plots that put Candy in the middle of many fistfights.

When it came to his image, Canary's grit set him apart, which is why when Dotort and Bonanza star Michael Landon got the idea to team up and do an episode that challenged Candy's tough guy image, they knew it might be a big ask of the actor who played him. So they did the respectful thing (probably not at all because they were still daunted by the actor) and they asked Canary's permission to make his TV character break down, seem weak and weep as the climax of the ninth season episode "To Die in Darkness."

Canary told the Archive of American Television that the episode required him to go "bananas," and that he had a different point of view when Landon and Dotort first asked him to do it. Instead of being nervous about canceling out his scruffy ruffian image, the actor embraced the opportunity to show the world that he could do something different. Canary said, "[Michael Landon] obviously had some questions whether I would be willing to do that, in terms, it was sort of counter to my image. As being Mr. Tough Guy. Well, I loved it. It was a chance to act."

Watch the video above to see the scene, which Canary recalled found him and star Lorne Greene tricked into getting trapped in a well not just for hours, but days. While both cast members grew grizzled to show the passing of time, donning uncharacteristic beards on Bonanza, it was Ben who had to deal when it was explosive Candy who broke first, "Mike wrote in that Candy, the tough guy, always goes to the fists, starts to go bananas. And starts to lose it, and come apart." He continued, "So I started to come apart. And started to scream and carry on and rant and rave." 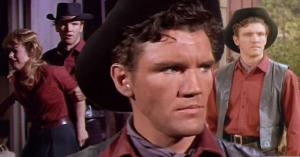 You'll see how in the throes of all this drama, Candy's last nerve gets shot, wrestling Ben Cartwright for control over a lit stick of dynamite. Just before, Candy asked Ben Cartwright, "Do you ever think about dying?"

Cue the waterworks. Tears stream down Candy's face in the most charged scene, and Ben's eyes get misty too, both pushed to the edges of their established characters and showing us what happens when the Ponderosa pokes you just a bit too hard between the shoulder blades. “That was a terrific experience," Canary insisted, so you can breathe easy watching all that tension.

And the entire experience for Canary was pretty much all thanks to Landon, who not only co-wrote the episode but also directed it, showing the intensity of being stranded in this dark hole from every angle.

In his interview, Canary praised his costar, whose creative way of looking at Candy helped Canary take the character to the next level. Canary noted that the praise was also mutual: "[Landon] was really complimentary about that [scene], appreciated that I had gone with the writing instead of against it. He’s an excellent director. He was doing his own stuff. He was just a prince. Absolutely wonderful to work with."

So there's a twist you may not have seen coming from Bonanza: Candy, cool as a cucumber without a single fist to raise over the fact that some other TV cowboy made a plan to break his spirit and make him cry.