Where To Watch Shop Store Contact
Home / Stories / Then and Now: The evolution of 23 fast food logos
foodnostalgia

Then and Now: The evolution of 23 fast food logos

Do you remember the original looks of Burger King, Taco Bell, Sonic, Subway and more?

The favorite restaurant chains of America may be quick at serving food, but they are more reluctant at change. If it ain't broke, why fix it? Still, some of these joints have been around for decades and they have slowly evolved over the years.

Sometimes, the transformations are extreme. Who remembers Pizza Pete or Taco Bell before it was purple and pink? Being who we are, we prefer the fonts, colors and cartoons of the bygone era. Let's take a look back at how some of the most familiar quick service restaurant brands have changed.

Do you remember these retro logos?

We remember the "T.J." before the Applebee's, but we don't recall the "Rx for edibles & elixers" bit. Sounds more like an apothecary.

See how many of the 31 flavors you can name.

The Florida-born giant began with more of a cartoon look, from its wordmark to the little king.

What a happy little star. He's still jolly, despite losing his feet.

See Also: These 21 old logos show that major brands looked much different in the 1960s

This reminds us of Foghorn Leghorn, whom we'd rather not eat.

More of a sit-down restaurant, Chili's does offer a To-Go. In any case, we wanted to include it. Though it looks printed up at a Kinko's, the original menu features a logo not too far off from the modern era.

We could go for a parfait right about now.

The Michigan pizza chain began as Domi-Nick's. The three dots on the domino originally represented the number of locations.

They went from coffee colors to frosting colors.

Will children of the future even know what "IHOP" stands for?

Jack in the Box

Of course, there used to be a clown on a spring, as well.

The Colonel always looked like kind of a hipster.

The original name was "Little Caesar's Pizza Treat." They got out of the fish and shrimp game long ago.

That looks a bit like Nemo. Aww, why'd you have to make us think of Nemo?

Which was your favorite era? We dig the double arches look. The very first iteration, with the "Famous Barbecue" proclamation, gives some credibility to the McRib.

Pizza Pete looked like a descendent of Little Caesar.

Now that is a cool logo. It looks as if it came right off a guitar amplifier.

It's evolved from Herman Melville to Splash.

We miss the sunset palette, which matched the colors of the tomatoes, cheese and corn. The new color scheme matches a Barbie Dream House.

She's not quite as "Old Fashioned" as she used to be. 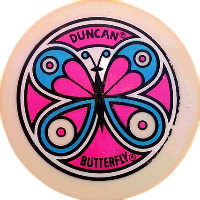 itsGretchen 4 months ago
Call me kooky, but I prefer and liked all the original logos. They seemed to have soul, whereas the new ones just lack soul. Sure, they're 'cleaner' looking, but soulless.
Like Reply Delete

Dan 35 months ago
Wow, can't believe Starbucks had a topless mermaid in their logo.
Like Reply Delete

ChrisPalumbo 35 months ago
The only thing really missing from one of these is the new Dunkin' logo, since they changed from Dunkin' Donuts to just Dunkin last year.
Like (1) Reply Delete