Which of the five boxes and toys would you collect? 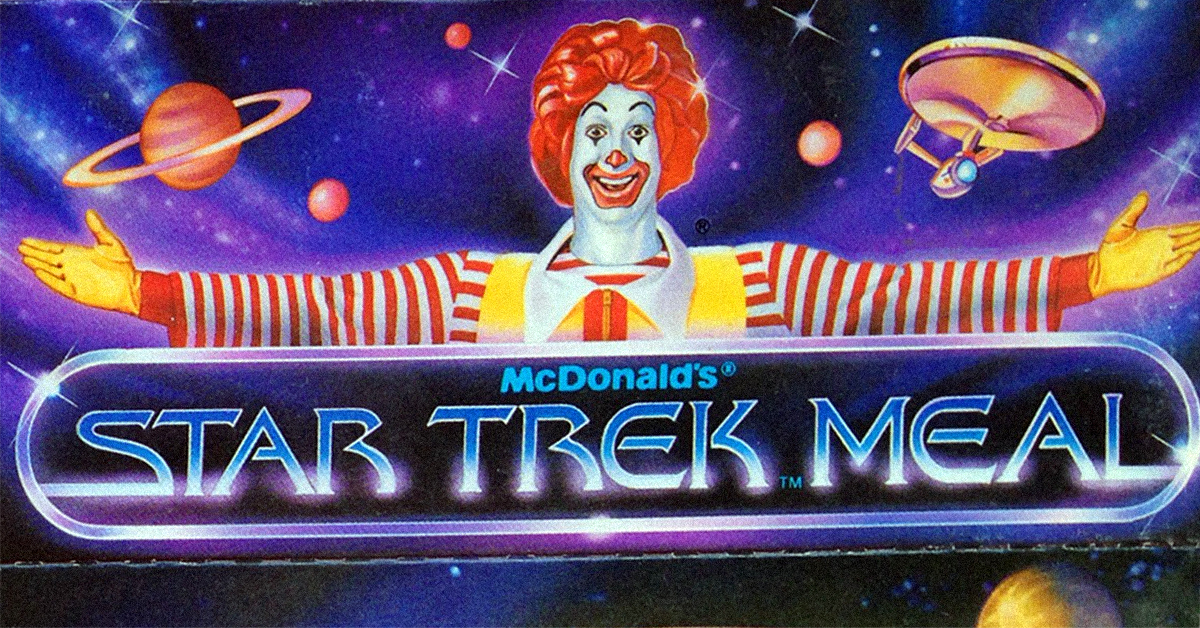 Four decades ago, a brilliant idea was born in Guatemala. Yolanda Fernández de Cofiño and her husband were running McDonald's restaurants when she created what she called the Menu Ronald. The bundled meal was targeted to kids and included a hamburger, small fries and small sundae. The corporate office up in suburban Chicago took notice. McDonald's shuttled the concept to one of its marketing partners, the Bernstein-Rein Agency. Founder and CEO Bob Bernstein came up with the name Happy Meal and a childhood institution was born.

A successful 1977 trial run in Kansas City led to the Happy Meal going national in 1979. The American launch of the Happy Meal happened to coincide with a significant pop culture comeback — the return of the original Star Trek crew.

After a failed attempt to create a sequel television series dubbed Star Trek II, much of the pre-production work was carried over into the cinematic debut of the Enterprise. Though he was not slated to appear in the Star Trek II show, William Shatner was back for Star Trek: The Motion Picture, alongside his crewmates Mr. Spock, Bones, Uhura and Scotty. The Enterprise team may have been wearing funky new khaki and powder blue uniforms, but it was a joy to have them back on the bridge.

McDonald's eyed the holiday-season movie as the perfect opportunity for its first promotional tie-in. Thus, the Happy Meal made a leap into the future as the briefly rebranded Star Trek Meal. 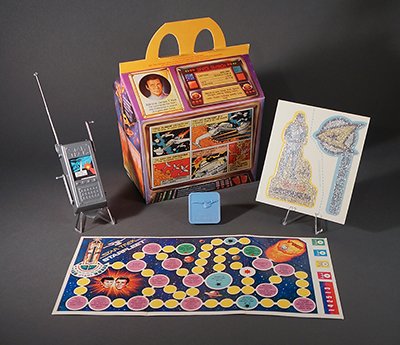 In this early phase of the Happy Meal, as much thought was put into the decorative box holding the food as the plastic toys tossed inside. And the Star Trek Meal had beautiful packaging, in five different varieties. Naturally, there were three boxes with backs devoted to Captain Kirk, Bones and Mr. Spock, as well as two profiling new characters Willard Decker (Stephen Collins) and the bald, beautiful Lt. Ilia (Persis Khambatta). The front of the Star Trek Meals showed off the Transporter, Spacesuits, Klingons and updated Enterprise spaceship seen in the blockbuster. Oh, there were mazes, word games and comic strips, too.

On the toy front, the prizes included plastic "U.S.S. Enterprise" rings, a fold-out board game, a replica video communicator and glittering iron-on sheets. Check out StarTrek.com for a closer look at these lovely bonuses. In 1979, they all could have been yours for the price of $1.47 (with hamburger) or $1.58 (with cheeseburger) each.

In the ensuing 40 years, McDonald's has teamed up with Hollywood for countless Happy Meal movie promotions. Recently, the fast food chain announced it will no longer offer cheeseburgers or chocolate milk in its Happy Meals, in an effort to keep the calorie count under 600. That truly makes these vintage Star Trek Meals a wonder of science-fiction.

HerbF 28 months ago
It wasn't Shatner who wasn't going to be in PHASE II, it was Nimoy! Not only was Shatner in it, but there are costume test photos of him in a modified version of the 1960's Uniform and his then current "hair" style!
Like Reply Delete