Cowboys, calypso, pajamas and transistors were all the rage in the Eisenhower era. 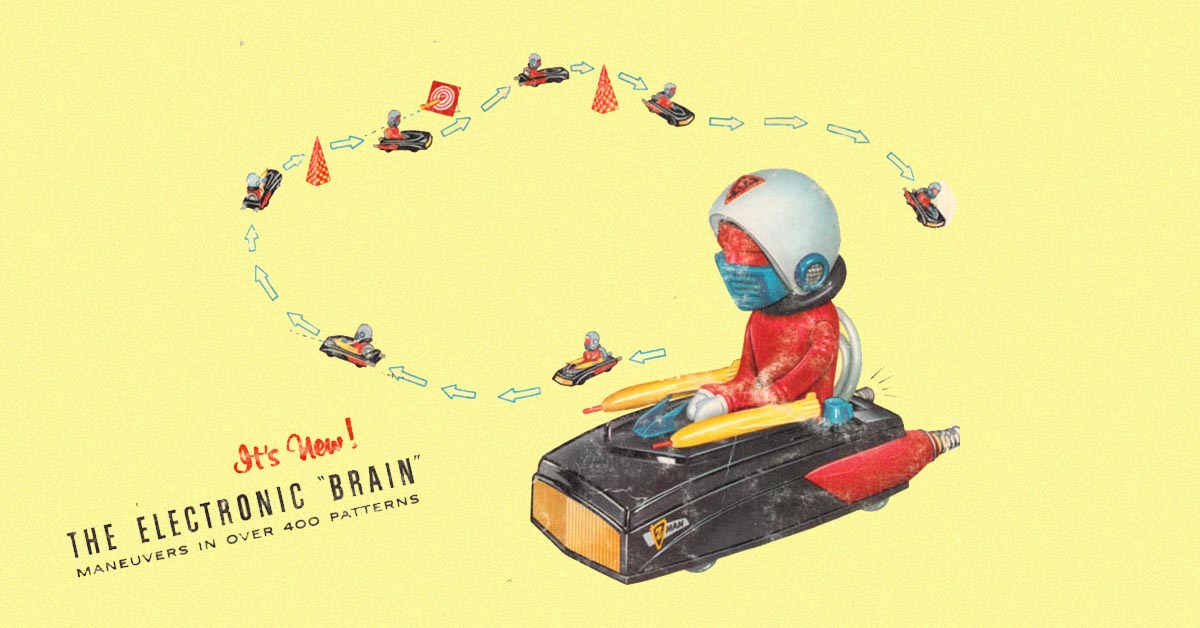 The 1950s were optimistic, booming years in American culture, and that was reflected in our shopping. There's a reason Happy Days was set in 1956. Over the Eisenhower era, the pages of the Sears catalog grew more colorful, more glamorous. Illustrations gave way to models, monotone blossomed into color, cowboys grew into astronauts. Rock & roll crept into the mainstream. We flipped through a few hundred pages of Christmas wishbooks and plucked some favorites for a nostalgic trip. Let's shop for gifts in the 1950s. 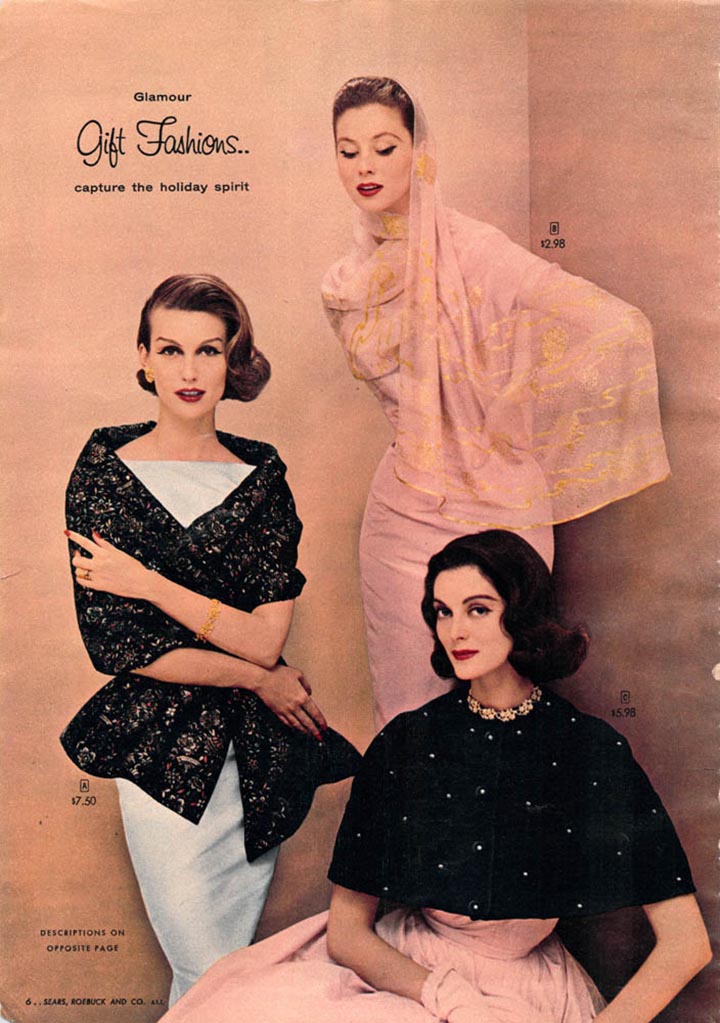 These models look straight off the set of High Society. 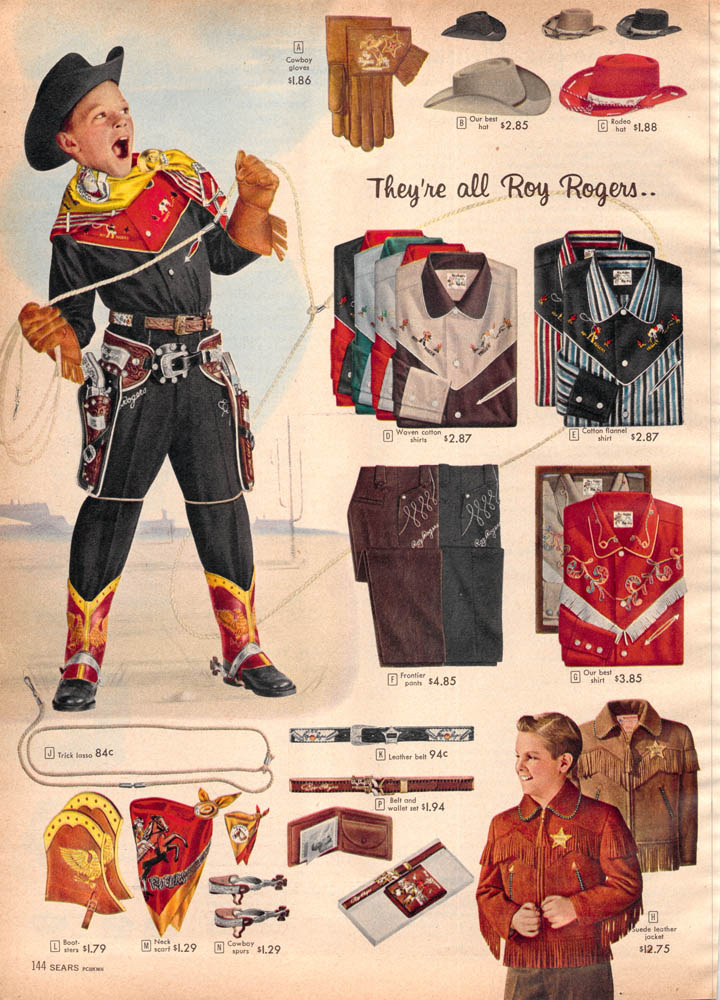 There are no fewer than a dozen pages of western wear in each catalog of the 1950s. The frontier was huge, and no man towered over the mesas like Rogers. Kids could expect Roy Rogers toys, shirts and pistols under the tree. 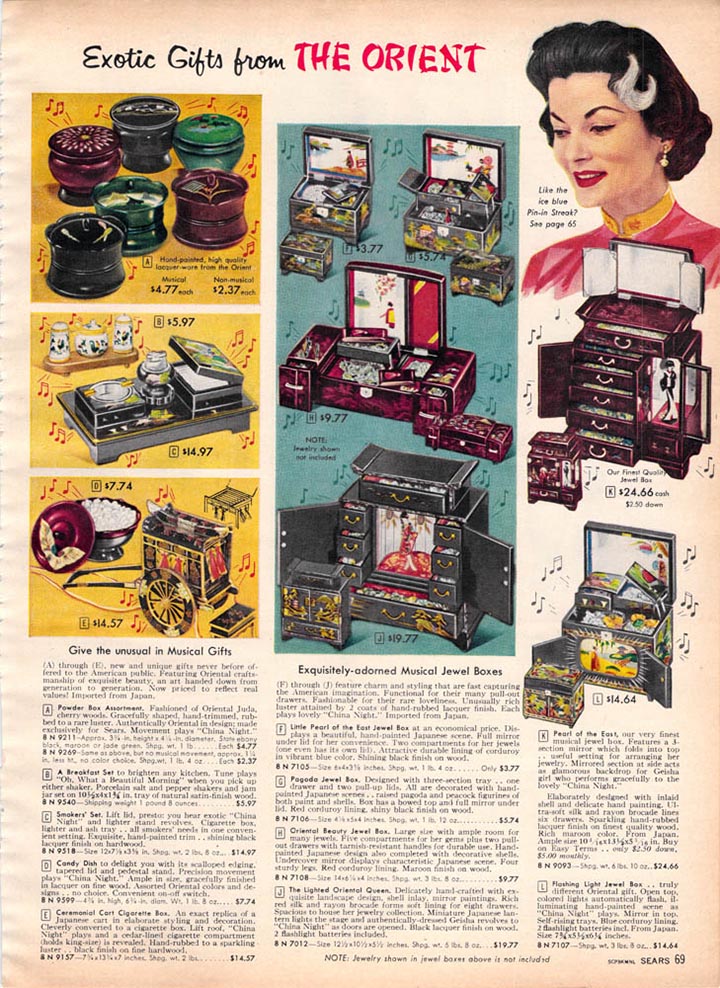 Though people lumped the continent together under the now dated monicker of "The Orient." These jewel boxes were made in Japan yet played "China Night."

4. There was not a great variety of menswear. 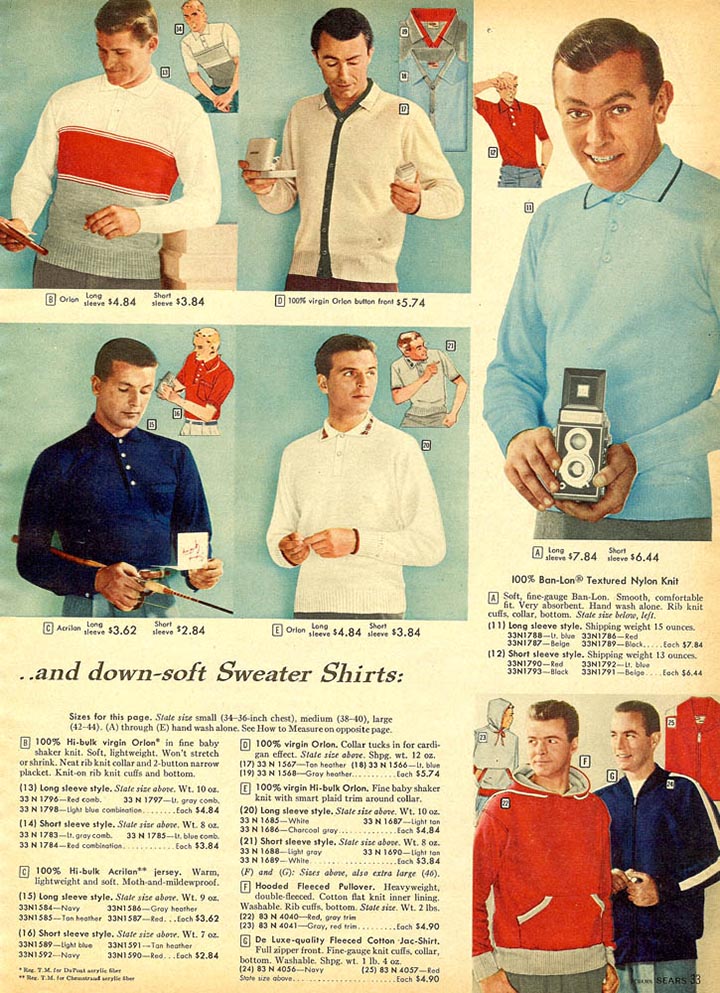 Would you like your high-waisted slacks in gray or dark gray? Ties and trenches were as colorful as it got outside of this page. These button-up sports tops were perfect for… using and electric shaver while proposing marriage? …reading Christmas cards while fishing? Just what are these models doing? Hoodies were in, too.

5. Going to bed was a fantastical affair. 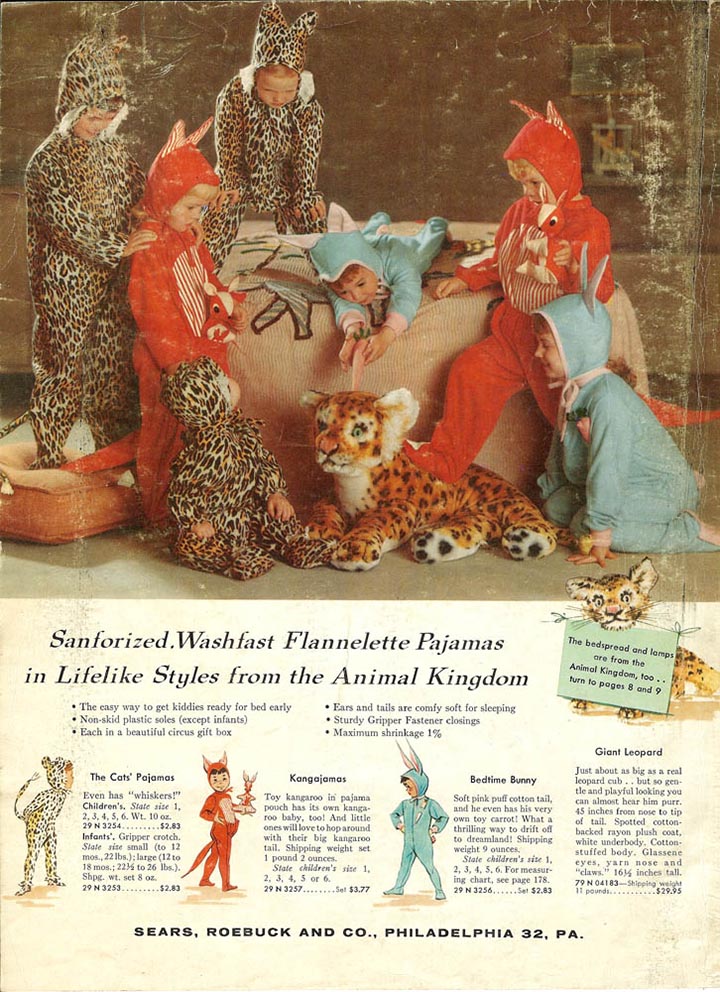 Sleeping was like Halloween, like Peter Pan! We are especially jealous of "Kangajamas." Think of what you could store in your pouch. 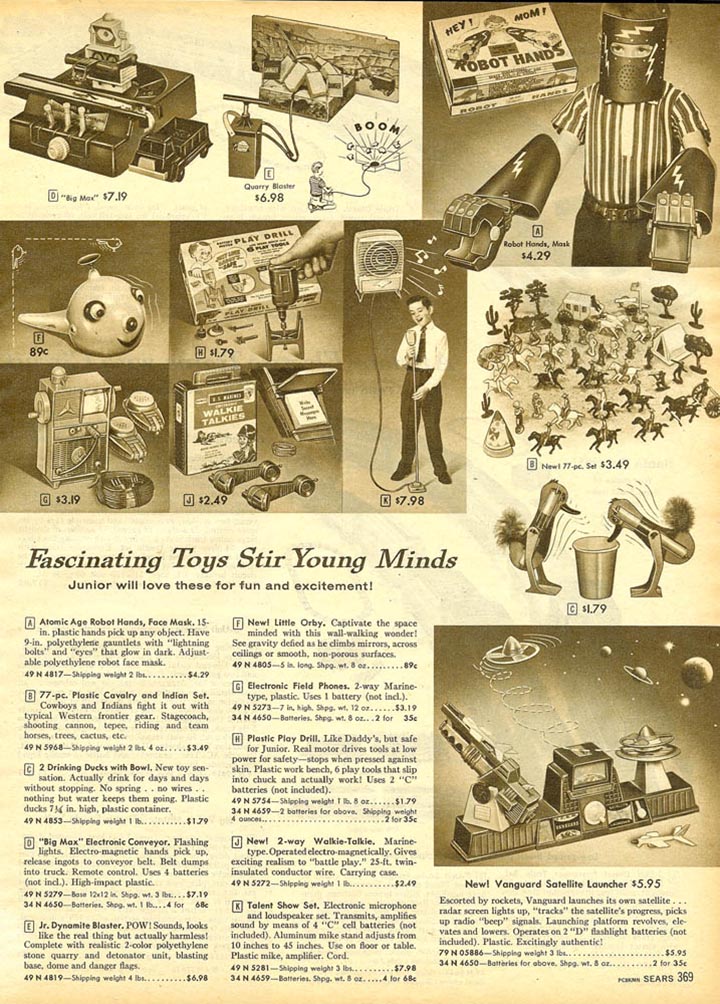 This selection of toys is a great example of children's imaginations at the time. An iron man before Iron Man! A pretend quarry explosion! A pretend crooner kit!

7. Alaska and space were fresh frontiers. 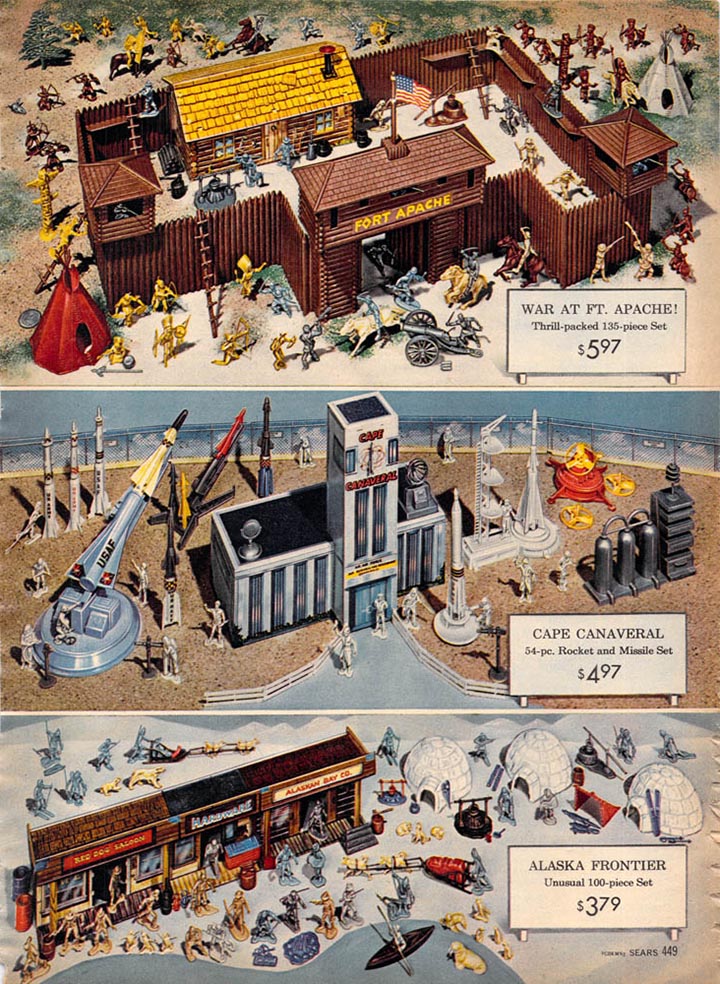 This Alaskan playset showed up the year the territory became a state. Note that it is still dubbed "unusual." The space program was really starting to dominate kid's dreams around this time, too. 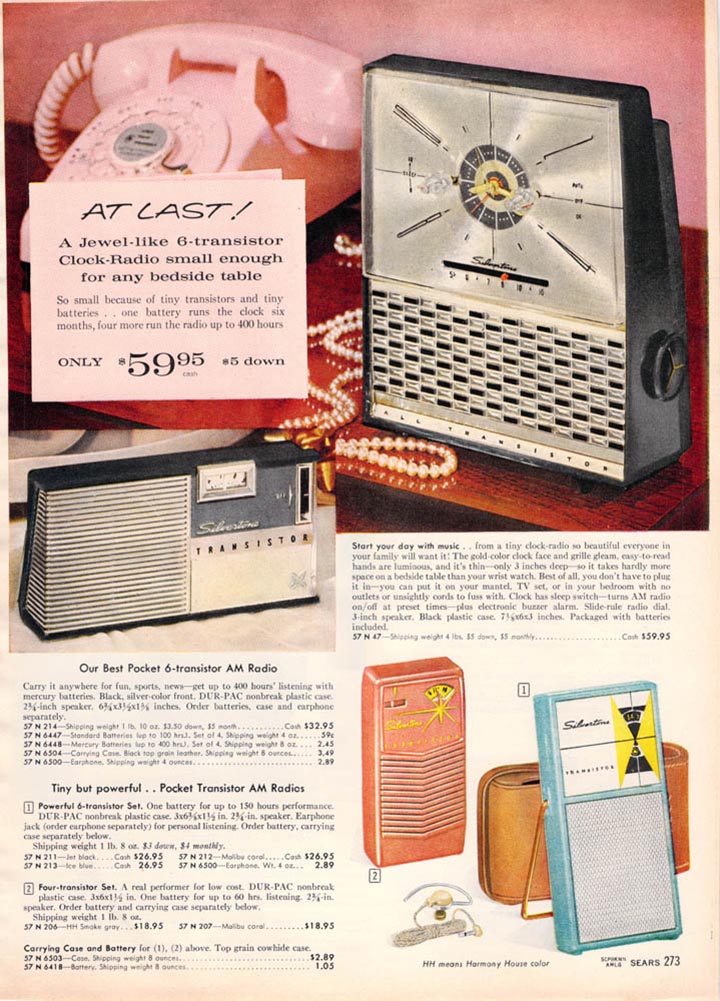 Putting a radio on a nightstand was revolutionary. Finally, music could fit into pockets. We also like the touch of a typical pink appliance of the time. 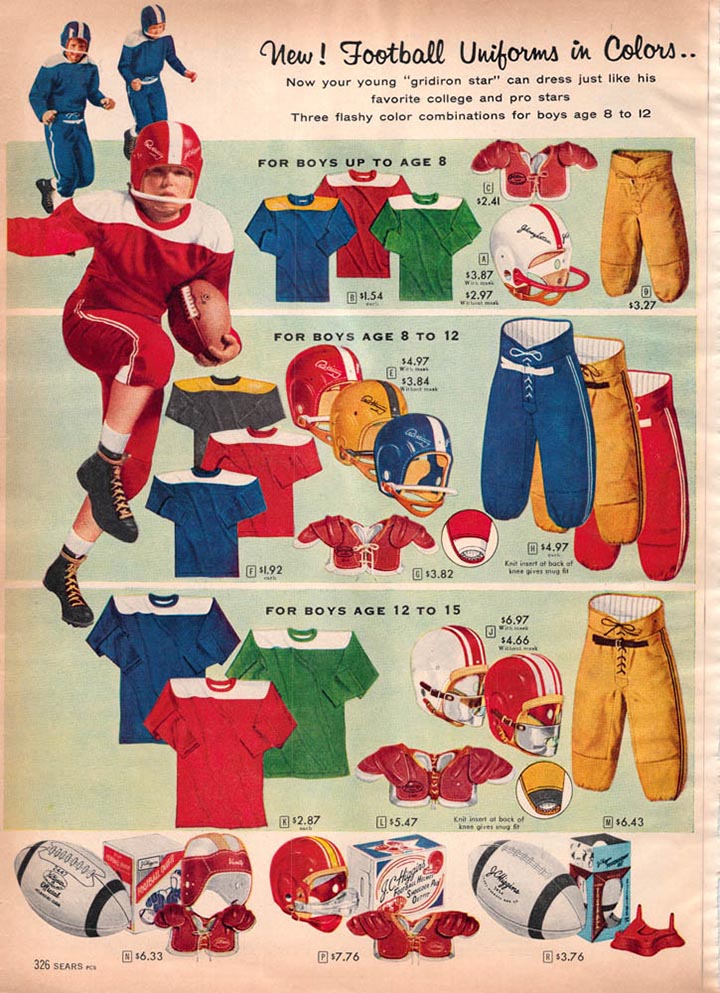 Football helmets started to offer more protection circa 1956. Note that the facemask was still optional for about a buck extra.

10. Did we mention cowboys were massive? 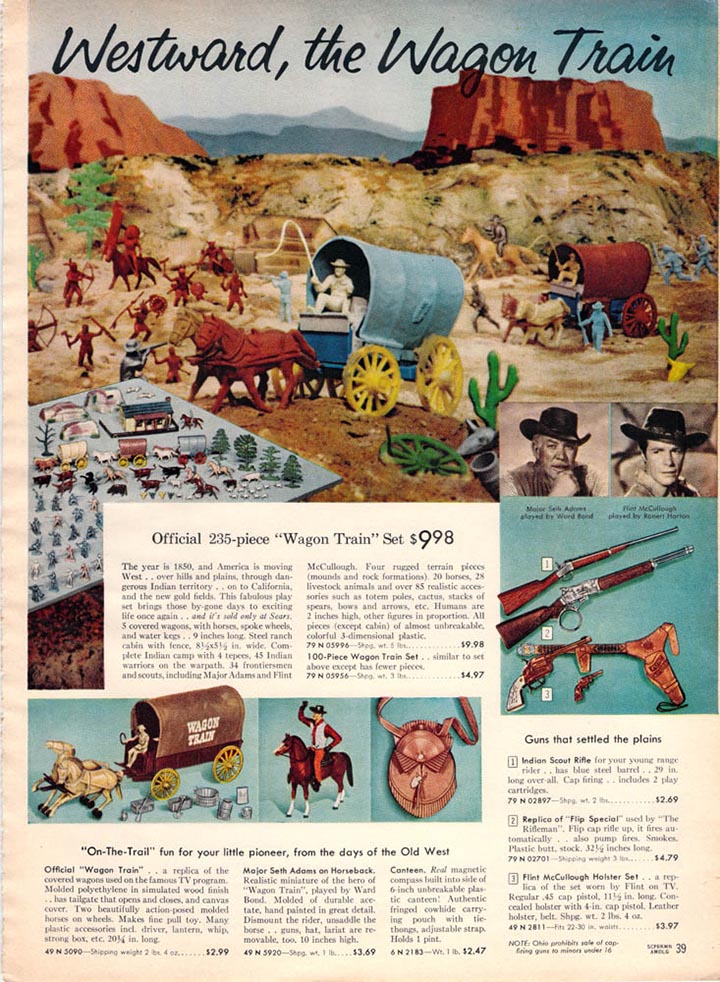 Wagon Train was a hit in the late 1950s, as this playset attests.

11. Families that dressed together, stayed together. 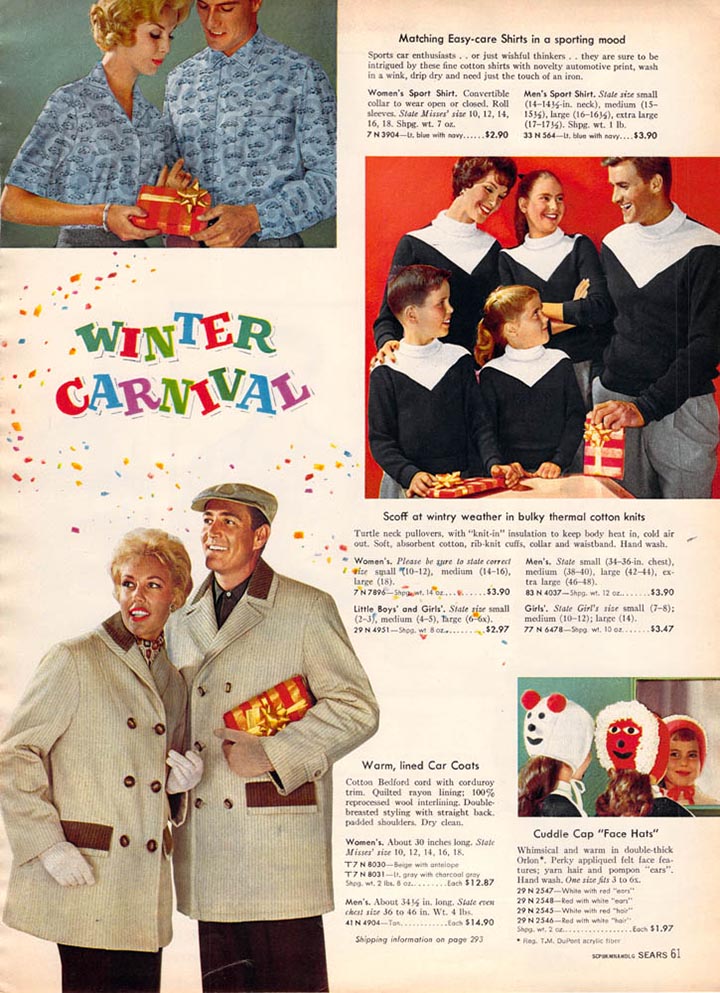 There are multiple examples of matching outfits for the entire family. We liked this one as it kind of brought to mind Lost in Space. The "Cuddle Cap" winter hats are cute, too. 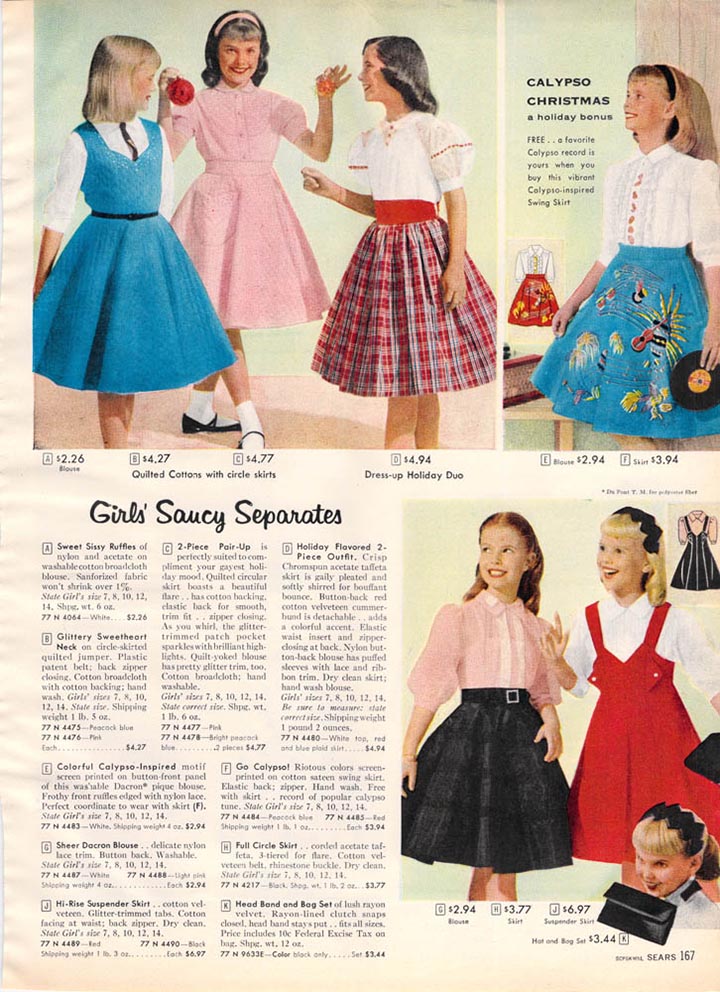 Rock & roll is hard to spot in Sears the year Elvis broke. Calypso, however, was all the rage. The girl's skirt in the upper corner came with a free record. We're guessing it was "Banana Boat Song." 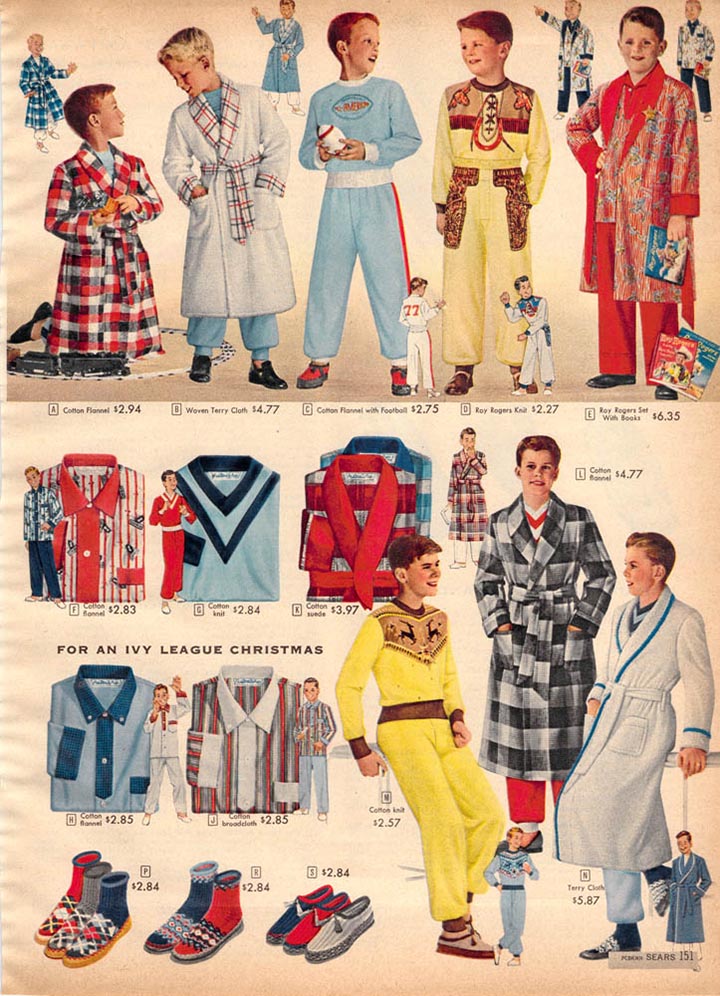 Young men could dream of Columbia and Harvard — literally — with "Ivy League" PJs. There were pages and pages of pajamas in these catalogs. People dressed up for bed.

14. Masons were quite popular. 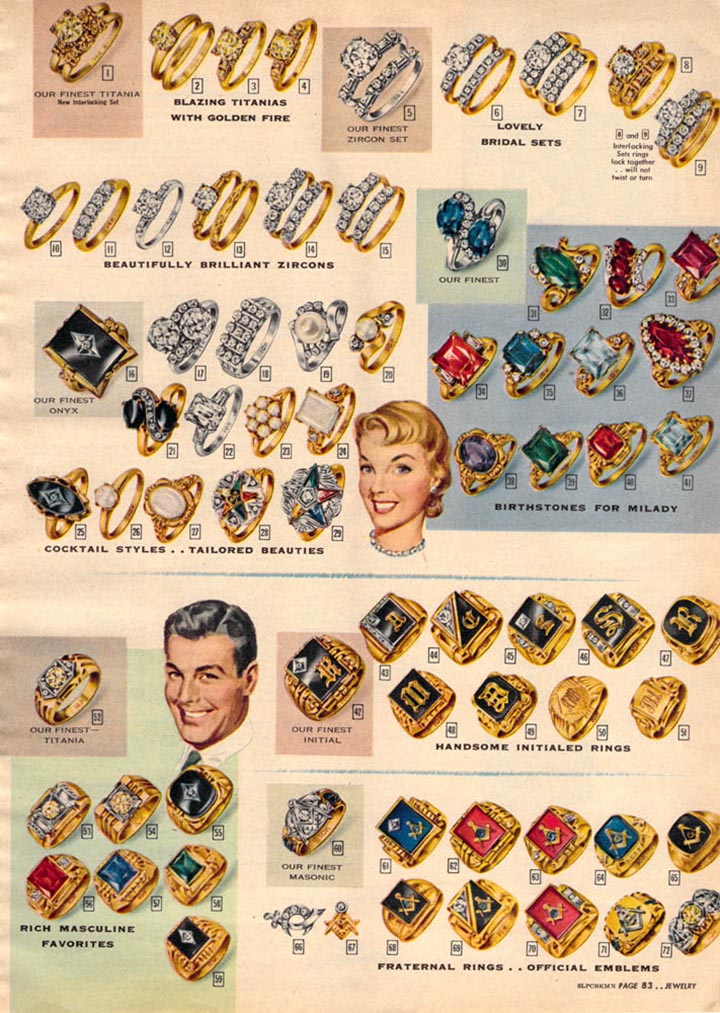 Men joined fraternal orders, and had the jewelry to prove it.

15. We were on the cusp of the computer age. 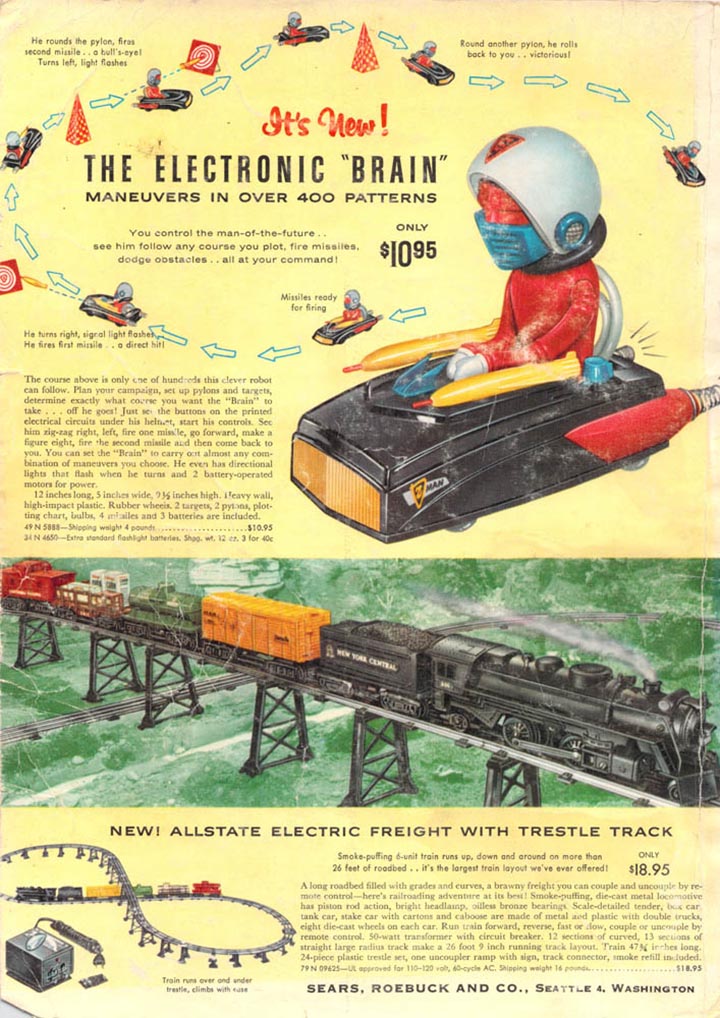 What exactly this "brain" was is unclear, but this about the earliest robotic toy we could find. Still, train sets ruled all. 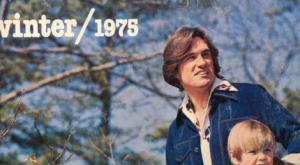