Where To Watch Shop Store Contact
Home / Stories / What ever happened to Lum's, the restaurant chain known for its beer-steamed hot dogs?
nostalgiafood

What ever happened to Lum's, the restaurant chain known for its beer-steamed hot dogs?

The company went from 450 locations and purchasing Caesars Palace to bankruptcy. 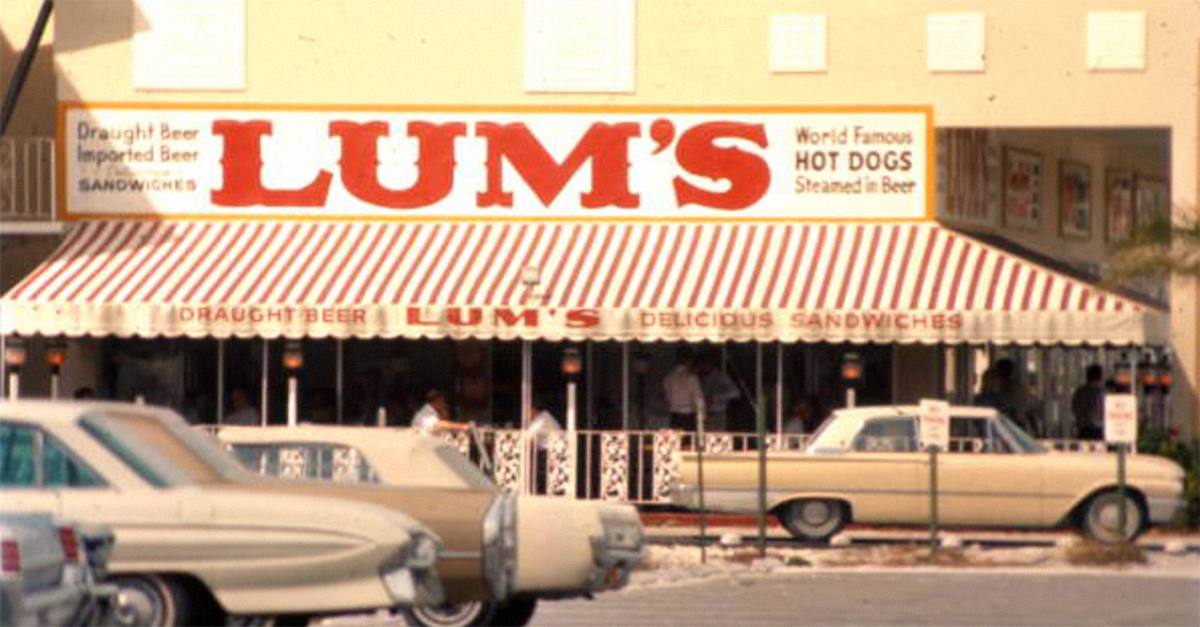 As you ride the moving sidewalk from the Las Vegas Strip to the entrance of Caesars Palace — past the fountains, marble and however million light bulbs — just remember that it all began with hot dogs cooked in beer. In 1955, Cliff Perlman was a U.S. Army vet and small-time lawyer in Miami. He and his brother put up $6,000 to purchase a 16-seat diner on the main drag in the middle of Miami Beach. The joint's specialty was hot dogs steam-cooked in beer. The place was named Lum's.

Six years later, the Perlmans were taking their pioneering fast-casual franchise public on the New York Stock Exchange. At its height, the Lum's fast food chain claimed 450 locations around the country, as far as Hawaii and Puerto Rico. It's no wonder the company was a hit. What could be more American than hot dogs and beer? (Okay, admittedly that sounds a little more German.) Lum's specialty cost just .35¢. An extra nickel got you Sherry Flavored Sourkraut on top.

The simple menu also offered fried seafood, hot roast beef sandwiches, a "Submarine" (their quotes) and burgers. The international beer selection was another unique hook, as one could wash down those hot dogs with brews from Japan, Denmark, Mexico, Ireland, Germany and the Philippines. This was far from common in a big chain in the early 1970s.

Here is a vintage Lum's menu, for example. 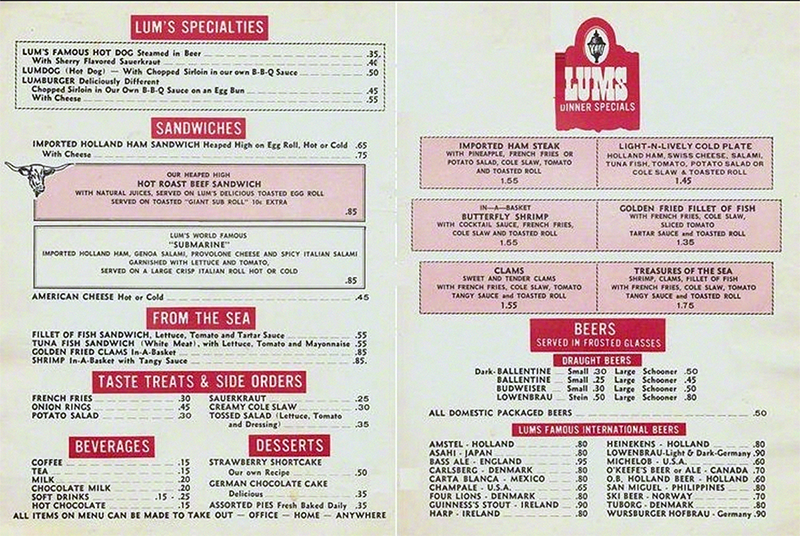 Like most Americans — and American companies — Lum's had Bicentennial Fever around 1976. This children's "Stars and Stripes" menu offers up "Ben Franklinfurters" and "Alexander Hamburgers." No, they were not cooked in beer. Comedian Milton Berle starred in commercials for the chain, taking pies to the face and dressing in drag. 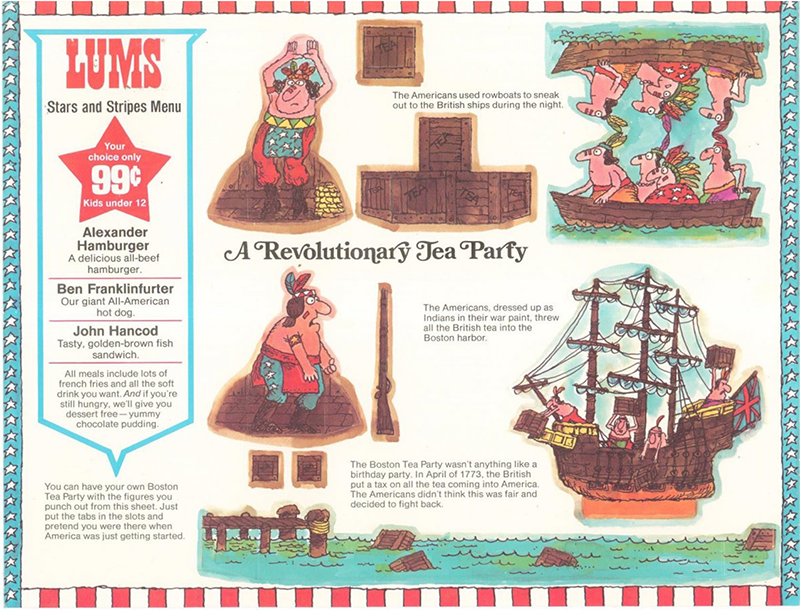 However, by this point the Perlmans had flipped their company to another owner. In 1969, the Feds were circling around the three-year-old Caesars Palace hotel in Las Vegas. The adult resort was a hot spot, especially after Evel Knievel jumped its fountains in 1967. However, it was suspected that Caesars had ties to organized crime, and the owners were pressured to sell.

Enter the Perlmans. The Lum's brothers purchased Caesars Palace for $60 million. Two years later, the Perlmans dumped Lum's off to the chairman of Kentucky Fried Chicken and changed their company's name to Caesars World. 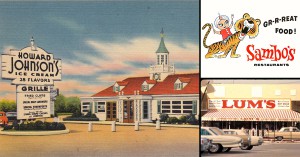 KFC bigwig John Y. Brown oversaw Lum's for most of the 1970s. While his chicken chain flourished, Lum's struggled. In 1978, the number of Lum's was down to 273. A Swiss chain called Wienerwald purchased Lum's. Wienerwald, confusingly to Americans, had nothing to do with weiners. It specialized in chicken and schnitzel. "Wien" is just German for Vienna.

Yet, the many locations were too much for Wienerwald to handle. In 1982, Lum's filed for bankruptcy. The chain largely vanished.

However, one location held on for decades in Bellevue, Nebraska. It finally closed in 2017.

suzanne334 21 months ago
When I was little, I lived their submarine sandwiches. There was something different about them. The dressing was so good. Does anybody have a recipe or remember what was on them? I’d really appreciate it.
Like Reply Delete

madmax61 21 months ago
Greates Hot Dogs ever! My Dad owned a Lums in Orange County California in the earlt 70s No traffic back then. awesome seasoned fries, imported beers. I tried it all there. I used to play outside when he was working on the weekends He told me they never advertised like they promiosed . Several owners filed a lawsuit but it never went anywhere. My Dad lost alot of money and part of his soul. He really loved that place. The concept was ahead of its time. I havNorms Dennys e yet to find a resturant that is compatible.
Like (1) Reply Delete

Or drag a file here to upload
DerekBird 30 months ago
I live in Montreal and the only Lum's I'd ever known of was in Plattsburgh, New York (about 75-90 minutes South of Montreal). I own a Lum's glass that I bought at a second hand store for 75 cents.
Like Reply Delete

WayneStation 31 months ago
I worked at Lums in Arlington and Richardson in the early 80s - good times and good chicken. I still use their recipes.
Like Reply Delete

suzanne334 WayneStation 21 months ago
Wayne, Do you remember how they made their subs? What they put on them? I’ve been searching for a long time.
Like Reply Delete

Scub8181 38 months ago
I managed the LUMS on W Henrietta Rd til it closed, the Ollie Burger was the best along with BBQ burger, Italian Burger, Gourmet Burger, Au Jus Beef sandwiches hot and cold RB and Turkey, spit-roasted chicken, fresh fish fry 4 beers on tap white and red wine, 6 beer, by the bottle, we did a really good business there were 5 in Roch area and 1 in Buffalo, I still have a large beer schooner
Like (1) Reply Delete

PaulWhiting Scub8181 30 months ago
Used to go to the one in Penfield...they had a great Key Lime Pie
Like Reply Delete