Before he became Radar O'Reilly on M*A*S*H, Gary Burghoff was best known for playing Charlie Brown in the Off-Broadway musical You're a Good Man, Charlie Brown. Although he ditched the yellow shirt with its signature black zig-zag, Burghoff retained the innocence of that famous Peanuts character, who so wished to belong. On M*A*S*H, Radar O'Reilly truly belonged, becoming such a central part of the show's charm, it could be argued he turned out to be the franchise's only irreplaceable character.

It's a well-known fact that Burghoff was the only actor from the M*A*S*H movie cast to transfer over to the TV show. He knew both Donald Sutherland's and Alan Alda's Hawkeyes, playing off both versions equally well, and the TV series executive producer Gene Reynolds summed up perfectly why it turned out to be Burghoff's character that was an essential element of the 4077th:

“Beautiful character, very funny," Reynolds told the Archive of American Television. "Marvelous actor, very gifted actor. And he was, for us, he was like a little boy in the camp. Kids could identify: I could be Radar. They identified with M*A*S*H through Radar. So that was an enormous help.”

M*A*S*H series creator Larry Gelbart said there was a reason why Burghoff was so talented at evoking this particular character, who in many ways served as the heart of the show, with his instinctively helpful ways and teddy bear in tow.

Gelbart said, "Gary was phenomenal. He’s a phenomenal actor. He does that thing that actors are supposed to do – and not all of them do – he listens when other actors are speaking to him, or speaking to someone in the scene, and yet he’ll do something on his own, that doesn’t take away from the focus. He’s just a fine, fine actor, by instinct and by training.”

Director Charles S. Dubin, who shot more M*A*S*H episodes than anybody else, echoed this praise, and extended it to how well Burghoff worked with what the writers envisioned, too: "He was wonderful. He had all the nuances and he captured what the writers had in mind wonderfully well. He really did Radar and, of course, it was written so the moment Harry Morgan was about to say something, then he would come in and say what Harry was about to say, which is why they gave him the name Radar."

Every little detail that made Radar Radar seemed to spring from the bespectacled curly-haired actor who carefully honed the onscreen farm boy so far from home.

Costar Jamie Farr told the Archive of American Television just how much Burghoff added to the character, explaining how Radar was more significant than even his own flashy character: "Gary Burghoff was an absolute delight. He brought that little charm to Radar. The teddy bear, the cuddliness, the naivete, his grape Ne-Hi, all of the wonderful charming things that he brought to that character. It was pretty hard to lose him. He brought a little something special to the show that none of the other characters had.”

That's why when Burghoff decided to leave the show in 1979, three seasons short of the full series run, it was a major shock to M*A*S*H's system. So much so that unlike any other time when a cast member left – Larry Linville, Wayne Rogers, McLean Stevenson – the show decided not to plug another personality in to fill the gap. They simply let the remaining cast fill in the hole, giving Radar a two-part episode send-off in "Good-Bye, Radar."

On the show Radar's retreat was explained away as a hardship discharge, but executive producer Burt Metcalfe told the Archive of American Television that for the actor, it was just his time to go. Metcalfe said, “Gary was very, very talented," then continued, “He was really anxious to move on and to play something different.”

Harry Morgan's Potter directly acknowledges in the episode why Radar's exit had to happen – and his explanation is delivered in a way that could be seen to describe both Radar's time in Korea and Burghoff's time on M*A*S*H: He had done his part. 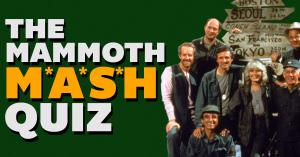 Radar and Hawkeye's mutual silent salute ensured it was a tearful "Good-Bye," but when Gelbart thinks back on Burghoff's most powerful contribution to the show, it's not the tiny details or the childish nature that he brought to life in Radar. It was the sensational way Burghoff performed in one of M*A*S*H's most difficult moments. Gelbart remembered how Burghoff delivered the shocking news about Henry Blake that iced veins gripping armchairs everywhere in "Abyssinia, Henry":

"Gary came through and did this incredible, beautiful, heartbreaking, not maudlin, just right on reading of the line, and we panned to the doctors who just kept operating, couldn’t look at each other, just had to work," Gelbart said.

But then, because there were shadows in the scene, they had to shoot it again.

Gelbart was crushed, saying, “I thought Gary could never ever be this good again, and I walked him around the back to the starting spot and said, ‘Okay?’ And this is why Gary was so brilliant: second time, acting, but acting from a real emotion, acting from how he really felt, he was able to do it just as brilliantly.”

dmarkwind 13 months ago
Not to say anything bad about Radar or Burghoff (who I've seen in-person in dinner theater productions), but how "irreplaceable" was he if the show could go on just fine for three more seasons after he left? Guess it's the difference of reading it as "he wasn't replaced with another character," as opposed to "he's a vital element that the show can't go on without."
Like Reply Delete

MichaelLafon 30 months ago
I have been a lifelong fan of allan alda seen every mash series at least 5 times by far . I told my wife some years ago how much it would mean to me if i could ever go meet the man i look up to and take him to lunch down in crab apple cove.. she laughed. I always thought i had a little hawk eye in me growing up.
Like Reply Delete

RedSamRackham 33 months ago
After leaving M*A*S*H Gary did a pet care show on PBS. Just like his Radar character he has been a real life animal lover. ☺
Like (1) Reply Delete

RedSamRackham Elaine1Cox 33 months ago
* Actually contrary to the animosity between their on-screen characters Gary Burghoff and Larry Linville were good friends off screen. Also after the Radar character left Jamie Farr's Klinger did a capable job of replacing him as company clerk. ☺
Like (1) Reply Delete