America’s #1 Classic Television Network
Find your local MeTV station
Where to watch
See when your favorite shows are on
See schedule
Personalize MeTV.com to follow your favorite shows
Free sign-up
Shop your favorite shows in the MeTV Store
Shop Now
Home / Stories / 8 pieces of merchandise that prove M*A*S*H was the biggest show of the early '80s
Nostalgia1980s

From toys and games to beers and bed sheets. 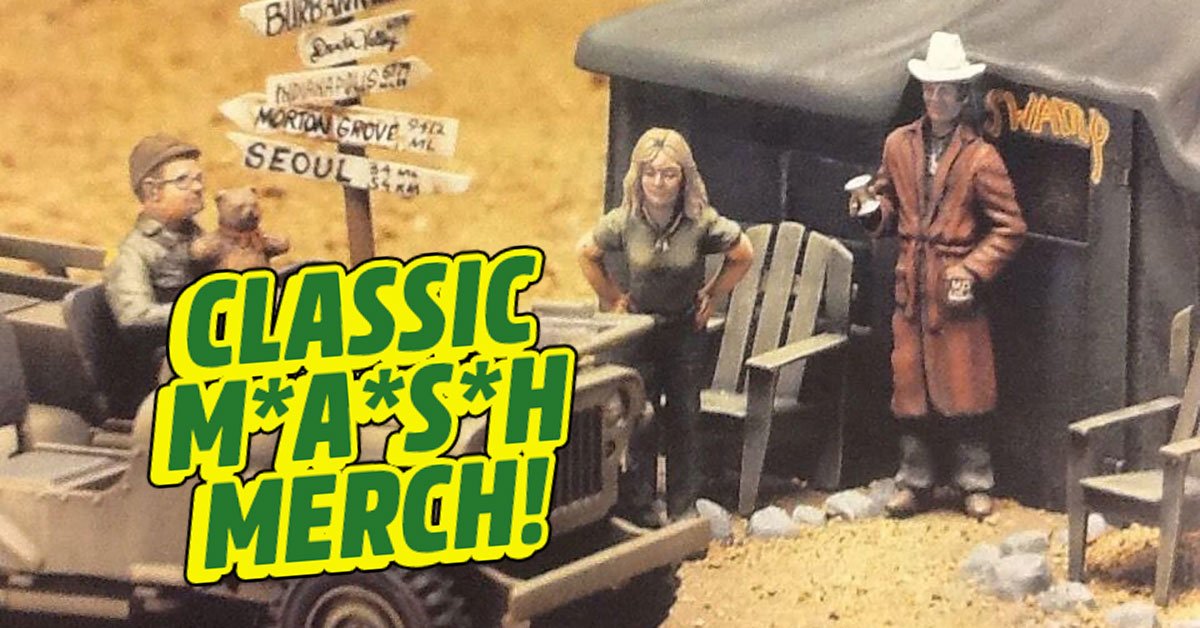 Anyone who questions the popularity of M*A*S*H needs only to look at the ratings for the series finale. "Goodbye, Farewell, and Amen" drew an estimated audience of 120-plus million Americans in 1983. The U.S. population was only 234 million at that time.

So, with half of America tuning in, you can bet the powers behind M*A*S*H saw marketing opportunities. That would explain the wide array of M*A*S*H merch that filled stores in the early 1980s.

There was something for the entire family. Yes, a dramatic sitcom about war surgeons even made toys for little kids. There were adult beverages, too.

Here is some of the more interesting M*A*S*H stuff that was on sale back in the day. 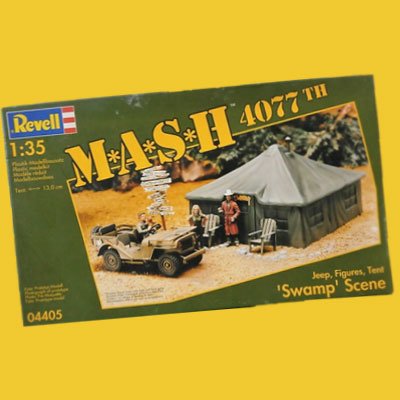 The detail on this 1:35 scale model kit was impressive, right down to the teddy bear in Radar's left arm. Hawkeye and Hot Lips were paintable figures, too. You needed a fine brush to get the "Morton Grove" lettering on one of those sign slats. Revell also sold a Bell H-13H Helicopter model kit for M*A*S*H fans. 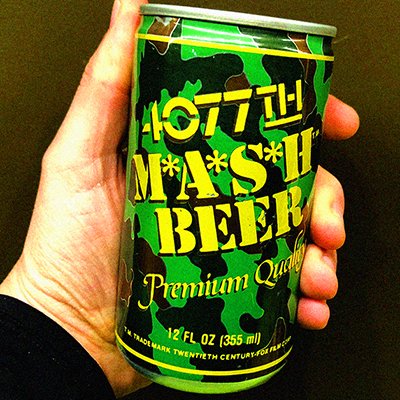 While the show took place in the 4077th Mobile Army Surgical Hospital during the Korean War, alcohol did play a larger part than mere sanitization. Hawkeye, Trapper and B.J. were all seen tinkering with a homemade distillery in the Swamp. Moonshine might have made more sense as a product tie-in, but it does not quite have the market share of beer. M*A*S*H was not the only television series with a novelty beer, either. Dallas had its own JR Beer — as in "Who shot J.R.?" — labeled "J.R. Ewing's Private Stock" on a blue ribbon. 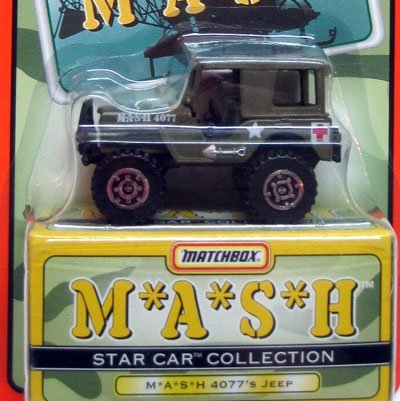 The Matchbox "Star Car Collection" came around for collectors years after M*A*S*H ended and included several beloved MeTV series. There was an Adam-12 cruiser, a Brady Bunch station wagon, a Shotz Brewery van for Laverne & Shirley, a taxi from Taxi, and a, er, pickup truck for Happy Days. 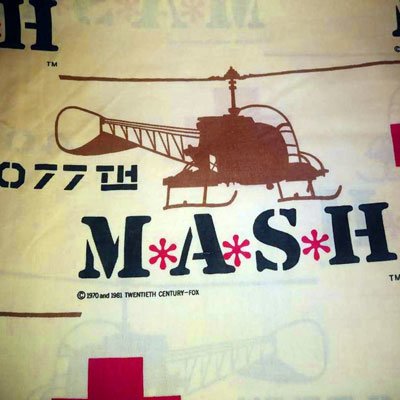 Did these come in cot sizes? 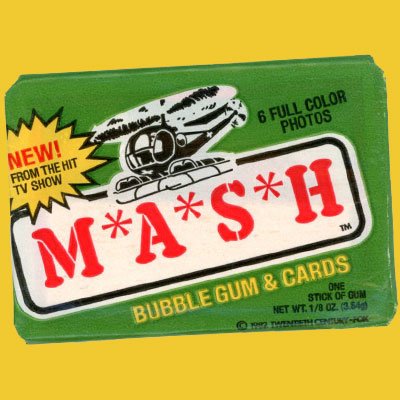 Many popular TV shows had trading-card sets, even The Waltons. The M*A*S*H collection featured stills from the show on the front and tiles to complete a massive puzzle picture on the flip side. 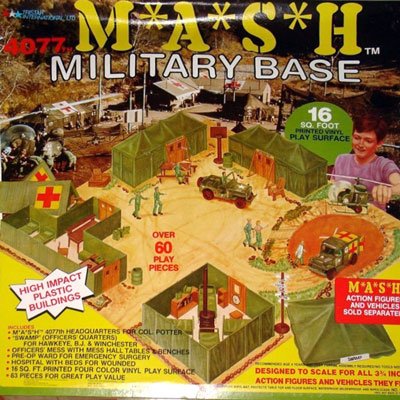 Now this is awesome. This detailed playset from Tristar (seemingly enjoyed by a young Conan O'Brien on the front of the box) included just about every nook and cranny of the 4077th. Col. Potter had his headquarters. Little plastic surgeons could prep in the pre-op ward and tend to patients in the hospital. The officers' mess offered a place to relax. M*A*S*H action figures and vehicles sold separately, of course. Those included a Jeep and the following… 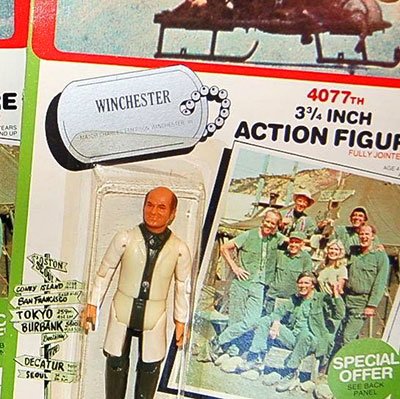 What use is a playset without action figures? The Tristar action figure collection included Klinger (in Army gear), Klinger (in pink), Potter, B.J., Hawkeye, a rather ripped Father Mulcahy in pink suspenders, Hot Lips and Winchester, seen here. Move over, G.I. Joe! Here comes David Odgen Stiers! These toys hit stores in 1982, just as M*A*S*H was nearing the finish line. 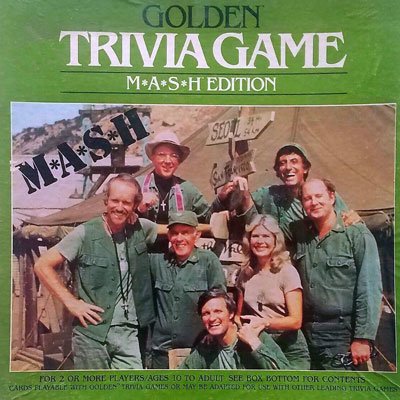 With 11 seasons and 256 episodes involving dozens of characters, there is no shortage of M*A*S*H trivia. No wonder Golden was able to come up with four decks of cards loaded with six questions on each face, separated into the categories of "Early Episodes," "Closing Seasons," "Love and War," and "Personnel Files." Want a sample question to get a sense of the difficulty level? Here you go: What is the nickname of Klinger's father?

KyrilaScully 4 months ago
I want the sign from the front of the swamp with the cities they came from and the miles that separated them from home.
Like Reply Delete 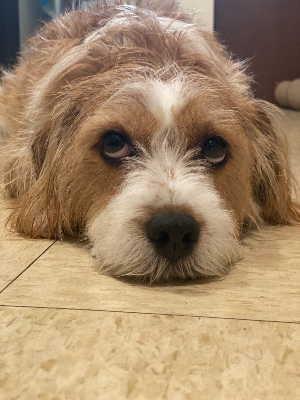 SkyeMacAllister 10 months ago
Father Mulcahy wearing pink suspenders? Oh, come on, MeTV! How embarrassing! Being a priest, the Padre is wearing a PURPLE STOLE, for cryin' out loud!!! 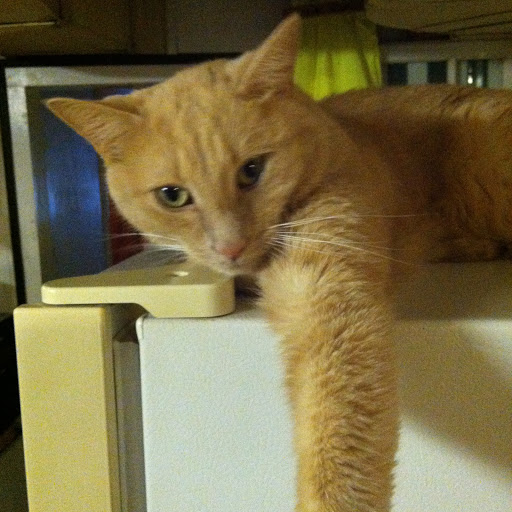 Darthy 18 months ago
I remember the M*A*S*H liquor IV bottle that came in a box set.
Like (1) Reply Delete
DerekBird Darthy 8 months ago
A friend of mine bought that back around 1983(?).

BigE 20 months ago
I still have the trivia game.
Like Reply Delete

RogerKaputnik 24 months ago
I still have my pair of M*A*S*H socks. Really, they sold socks. And I *might* still have my olive drab M*A*S*H T-shift, although I've long since outgrown it.
Like Reply Delete

EveningSkye DerekBird 5 months ago
Come next January, I'll wish you a Happy National Gorilla Suit Day! Do you like the Acme or Ajax suits the best? 😉❤😁
Like Reply Delete

HerbF 24 months ago
The M*A*S*H action figure line had two Klingers - one in a dress and one in standard Army outfit - since he had already become the company clerk (and got a promotion) by that time.
Like (1) Reply Delete

IdaKnow56 24 months ago
I also had a glass IV bottle with MASH printed on it. It was full of vodka. I brought it at a liquor store. Kept it in my bedroom closet on a coat hook so I could take a big sip while I was changing clothes after a hard day at the office. Also added it to my drinks during commercials while I watched TV in the bedroom of my teeny first apartment in the 80's.

JKMallaber 25 months ago
I knew a kid who had a glass IV bottle with some kind of red liquid inside. MASH was stenciled on it, and there was a rubber IV tube. Pretty sure he didn't make it himself, but who knows . . .
Like Reply Delete

bdettlingmetv JKMallaber 25 months ago
Pretty common during their time. They showed up in novelty catalogs and I think Spencer's Gifts had them as well.
Like (1) Reply Delete

TCKirkham JKMallaber 24 months ago
Hey I have one of those gizmos somewhere in my collection, and like Brian said, I got it at Spencer's YEARS ago! They're supposed to be drink dispensers for parties and such.
Like (1) Reply Delete 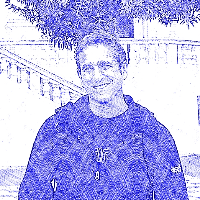 MikeG JKMallaber 24 months ago
My dad had one!
Like Reply Delete

Barry22 25 months ago
Never knew any of these things even existed. Cool article.
Like (1) Reply Delete

MrsPhilHarris 25 months ago
I had a camouflage green t-shirt that had M*A*S*H on the front. I think it had something on the back too. I remember wearing it in some foreign country and getting asked several times if I would consider selling it.
Like (2) Reply Delete

RobCertSDSCascap 25 months ago
A video game, too. 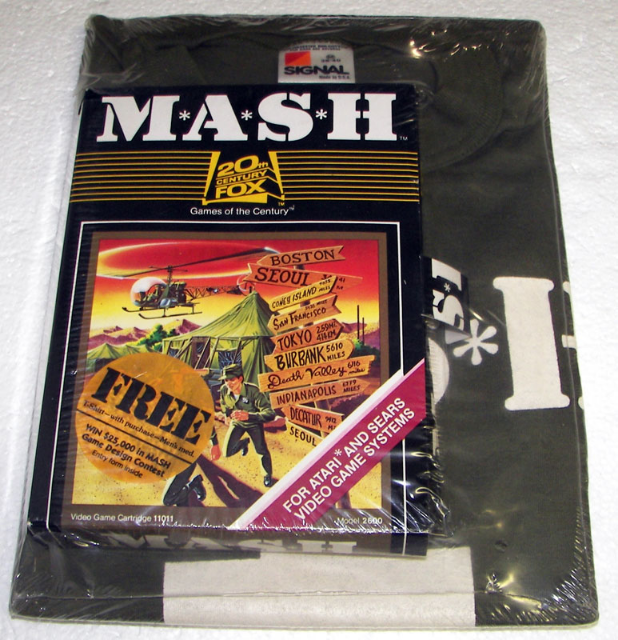 ChrisMZangara 25 months ago
We have the Trivia game. Unopened. Getting harder to resist though. :)
Like (2) Reply Delete

Bryson ChrisMZangara 22 months ago
You MUST!! RESIST !! It’s a true treasure no one will ever find in any treasure chest anywhere. You should consider yourself blessed and maybe you should get a safety deposit box. That will help you resist. “ outta site outta mind”
Like (1) Reply Delete

Hogansucks1 ChrisMZangara 10 months ago
I am curious-who on this planet claims to have the best M*A*S*H* collections? All would be fun to see! I know the Smithsonian has the ‘Swamp’ on display 😁
Like Reply Delete