You need plenty of Kleenex to get through the holiday episodes of 'Wagon Train,' 'Bonanza' and more. 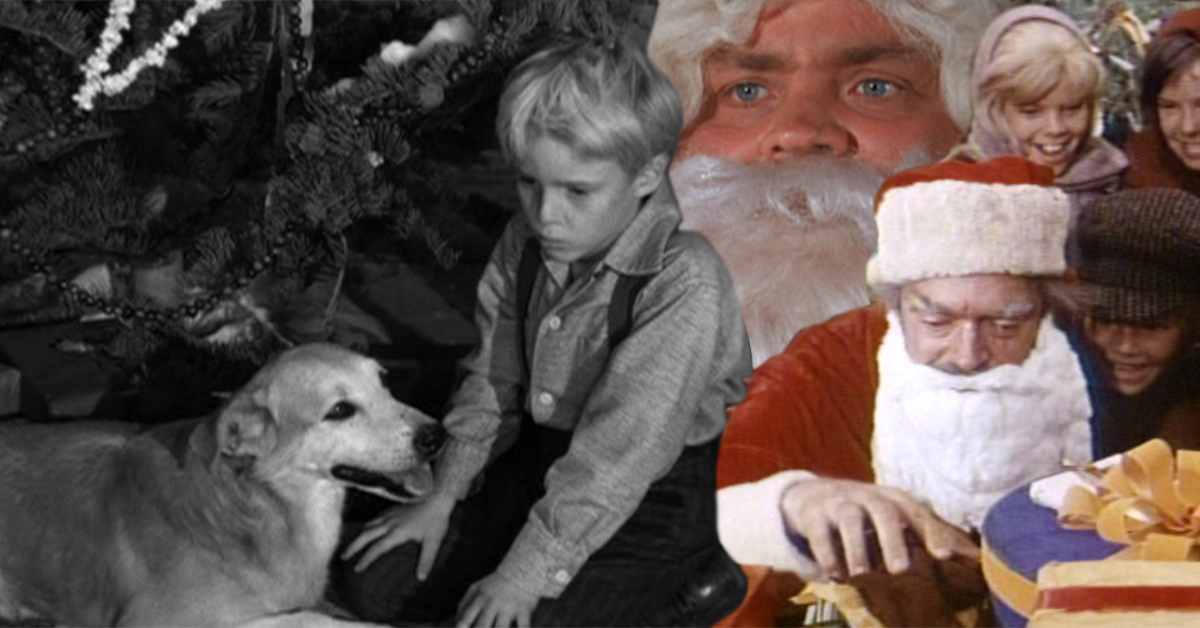 When TV shows celebrate Christmas, it often comes with a lesson or two bundled up in the plot, meant to resonate with its characters and viewers alike. Through TV history, it seems like every series has attempted to capture "the true spirit of Christmas."

On sitcoms, Christmas episodes are often about discovering the meaning of family or the value of friendship. In crime shows, there's always some Christmas mystery to crack. Then there are the dramas, which always seem to find the most unhappy person trudging through the holidays.

Those shows never failed to wrap up on a cheery note with a ribbon and a bow. Classic TV Westerns, on the other hand, brutally tugged on our heartstrings.

That's because Westerns seemingly view the "true Christmas spirit" exclusively through the lens of selfless giving. On shows like Bonanza, Wagon Train and Gunsmoke, not a spoiled kid was in sight, as each series opted instead to be laser-focused on showering gifts on the less fortunate.

From young kids trading away Christmas wishes to become Christmas saviors, to an endless stream of orphans, there was no escaping these special episodes without tearing through an entire box of tissues.

Let's start by revisiting Western Christmas past in this incredibly sentimental 1958 episode of Wanted: Dead or Alive, "Eight Cent Reward." The episode features guest star Jay North (Dennis the Menace) as young Laddie Stone, who offers all eight cents of his savings to bounty hunter Josh Randall if he can deliver Santa Claus to the boy (and his adorable dog) by Christmas Day.

You may be thinking: I thought you said no spoiled kids! Well, get ready for this plot twist, because it's a doozy—so much so that even though Randall can't in good conscience agree to the job, he also can't find it in his heart to say no. 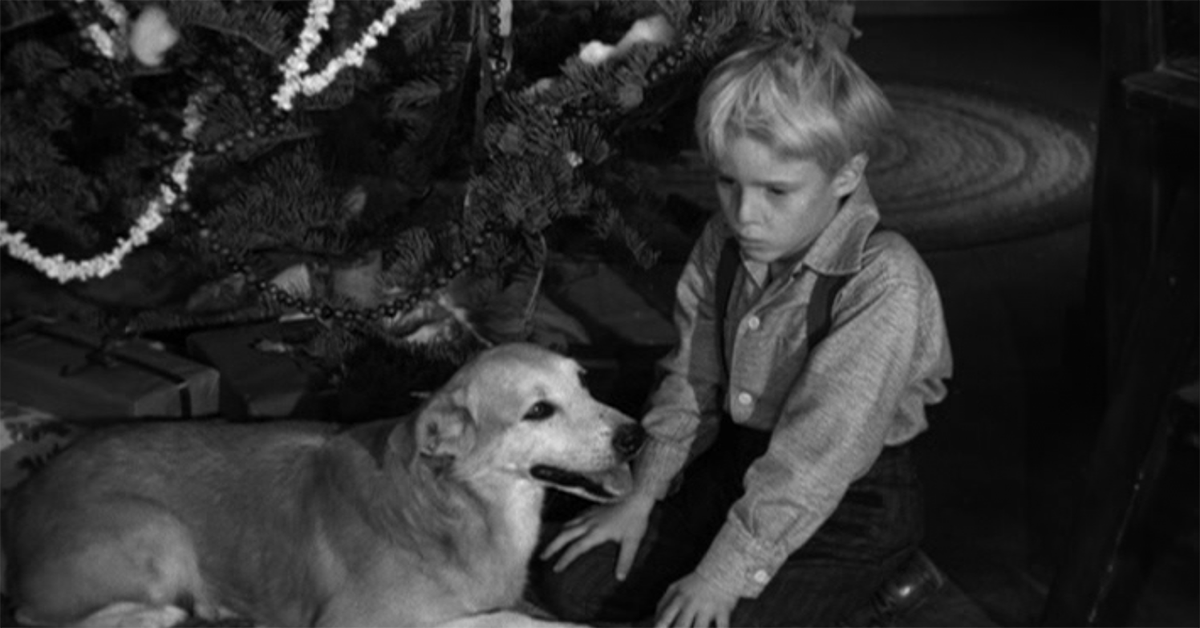 So, Randall hatches a plan. He hires the town drunk to stay sober for one night to pretend he's Santa Claus. His aim is to find out what it is the kid wants so bad, so he and the boy's parents can finally get him the gift he's pining for. When the drunk dependably has too much to drink, Laddie cannot be fooled, ripping off the imposter's beard. This reveal threatens Laddie's belief in Saint Nick for good. Just take a moment to take in the heartbreaking spectacle of Jay North looking so sad beneath his own Christmas tree above. We'll wait. 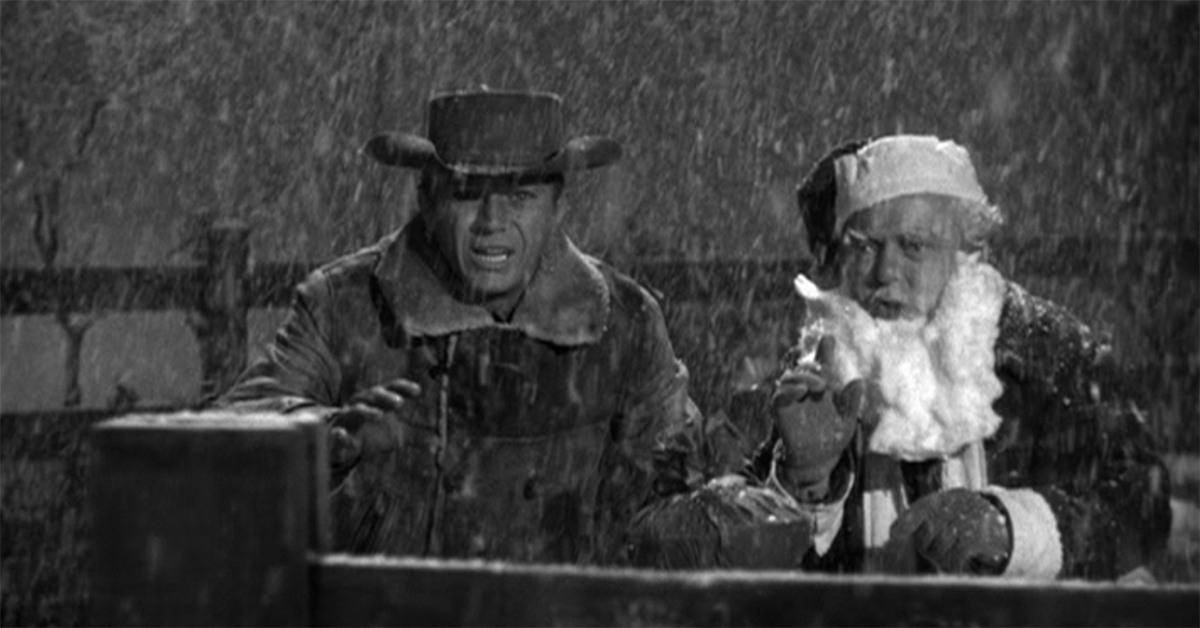 As Randall is branded a liar and everybody goes to bed unhappy, the young boy is left with his father's haunting words, echoing a dismal idea for any kid to ponder on any day, let alone Christmas: "Life just ain't made up of dreams." It's heavy stuff. But this is TV, so don't worry your pretty head about a happy ending.

When Laddie awakes the next day, the special present he'd dedicated every Christmas wish to getting was right there on his porch: a rifle for his pa to fend off the wolves attacking their sheep. With no tracks in the snow to explain who left the gift, Wanted: Dead or Alive achieves that highly sought Christmas miracle — everyone's become a true believer in the end.

If you think Laddie Stone's story was a tearjerker, dry your eyes to prepare for more. Because in episodes like Bonanza's "A Christmas Story" and Gunsmoke's "P.S. Murry Christmas," crowds of orphans are threatened by thieves and abusive caretakers. It takes Hoss as Santa and Titus as an unexpected hero to save the day, convincing conmen to go straight and stern Scrooges to go soft. Westerns are unrelenting when it comes to driving home the notion that Christmas is a day of making right and giving back. 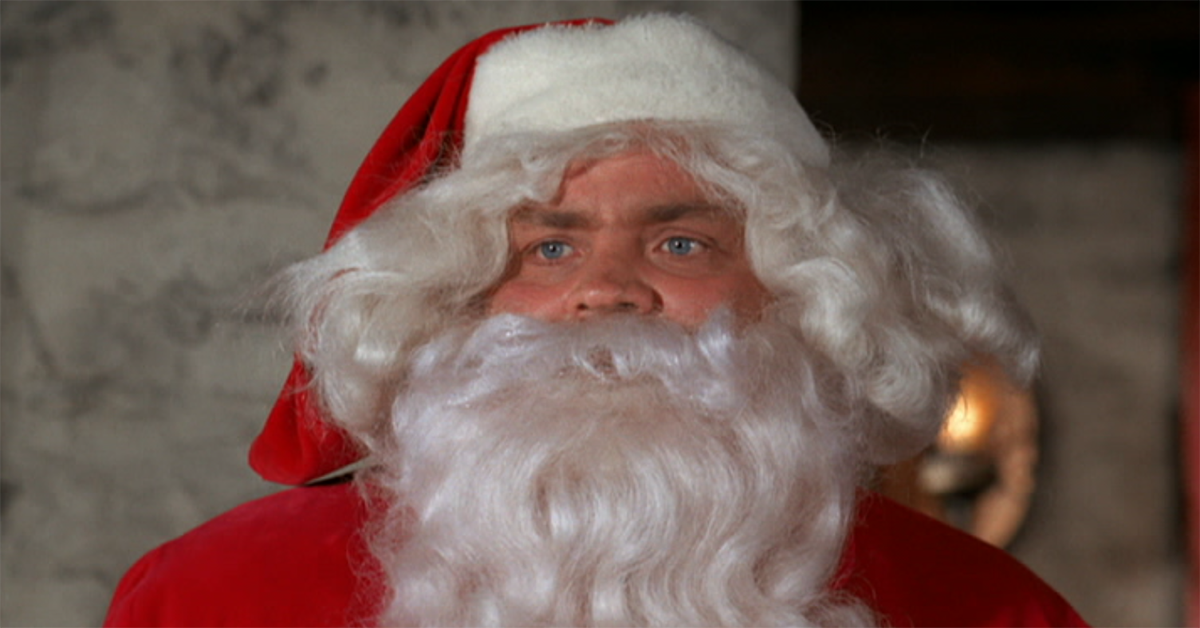 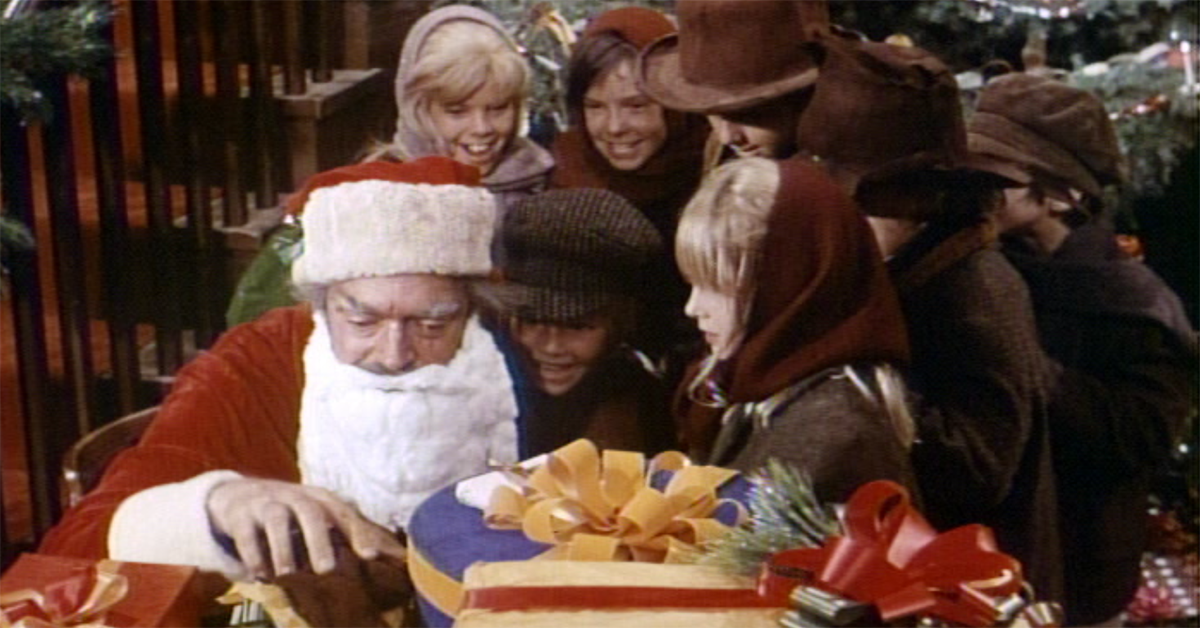 Those episodes certainly stirred up a flurry of tears for viewers, but we must warn you, we've saved the most withering classic Western Christmas stories for last.

On Have Gun—Will Travel in 1962, in the episode "Be Not Forgetful of Strangers," the show spins the old, familiar story of the pregnant couple who can't find a room at the inn and creates its own Christmas miracle, complete with "tinkling cymbals."

It all starts when Paladin stops into a saloon in a random Texas town in which he finds himself on Christmas Eve. The whole town is there, partying up a storm, including the town doctor who's already passed out from "the one day a year he drinks." This becomes a huge inconvenience when a couple bursts in, with the pregnant wife ready to pop at any second.

To Paladin's utter dismay, the whole town shrugs off the desperate cowboy and his wife, and they even say there's no room for them to stay there. That's not good enough for Paladin, who insists on behalf of the couple that the inn makes room, ending with the couple shoved into a small storage closet, where Paladin does his best to make the wife comfortable in a makeshift bed. 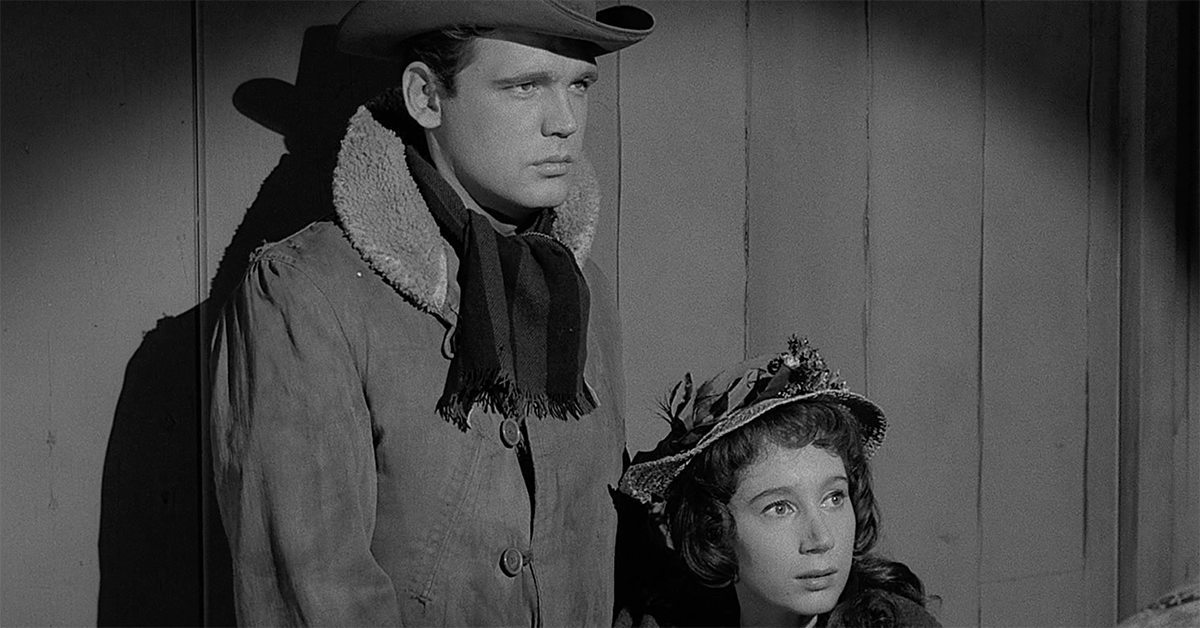 As the husband confesses that he worries his wife is not strong enough to make it, the party outside their door rages on. This moves Paladin to make one of the most compelling, straightest Christmas speeches ever uttered on TV. He tells the laughing room, "There's a human being in there who needs your help."

In the end, the baby is born, a beautiful boy, and the party, properly chastened by Paladin's strong words, collects an offering to help the family start the new year in a better place. Here at last we see a whole town come together for the good of the next generation, as noble Westerns always tend to do. 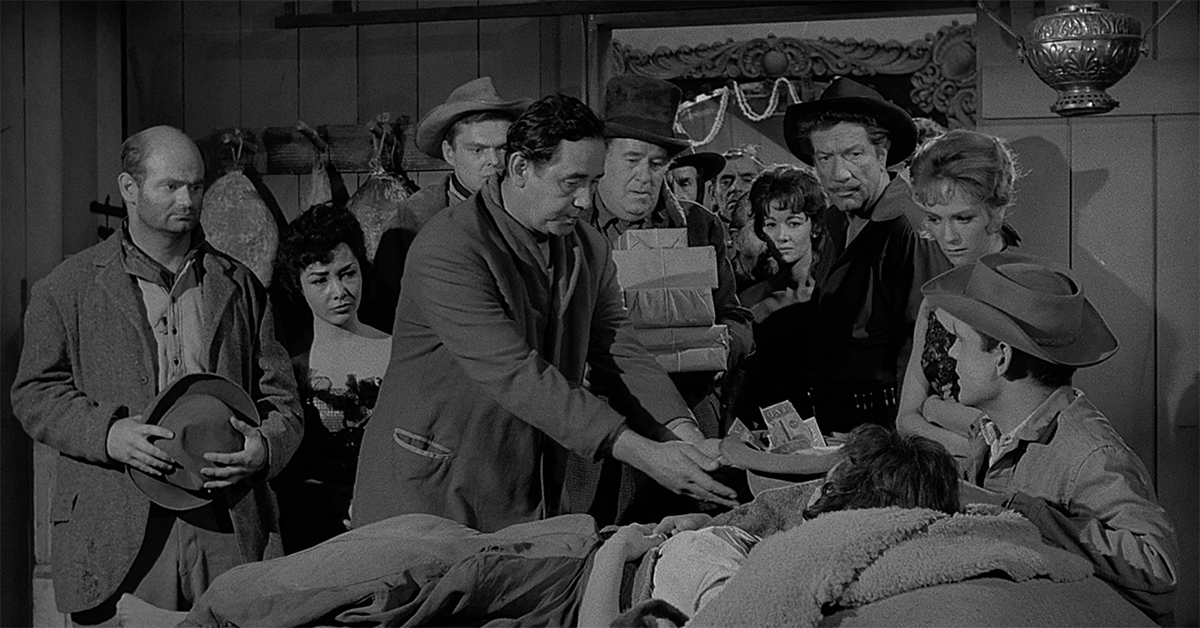 The episode was called "The Mary Ellen Thomas Story," and the plot follows two young girls, both eager to make it to Colorado in time for what they're told will be a White Christmas. One girl, Mary Ellen, is an orphan. She's on the wagon train because she's meeting her family out west after losing her folks. The other girl is Sally Mayhew. She's suffering from consumption, and she's not expecting to make it much past Christmas.

The girls form a friendship, despite the fact that Mary Ellen is disliked by pretty much everyone else in the wagon train. That's because she covers up her insecurity with a tough-as-steel exterior that would rival any cowboy's. She gets caught making trouble time and again, even sometimes stealing from others. That's not in the Christmas spirit one bit. 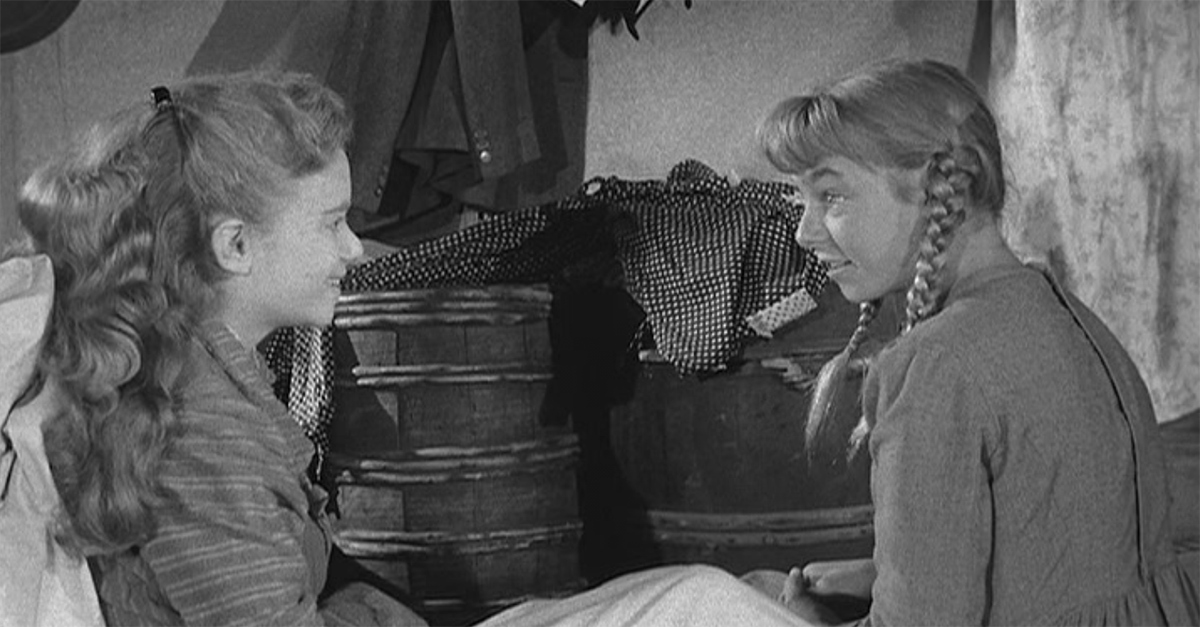 But while it's true that Mary Ellen steals sugar, this is a Western, so you know it's not for selfish reasons. It's to make sweetwater to help Sally's throat heal. And then, later, when Mary Ellen steals a horse from a wagon that isn't hers, she's got honorable intentions, too, but we don't fully understand them until she comes across a Native American boy who's hurt badly from falling off his horse. She stalls her mission to save his life, returning him to his family.

That's where the wagon train catches up with her, and she finds out from Flint McCullough that as a reward, the hurt boy's father, the chief, says he's willing to give her anything she wants. She knows just what to ask for and whispers it to McCullough. 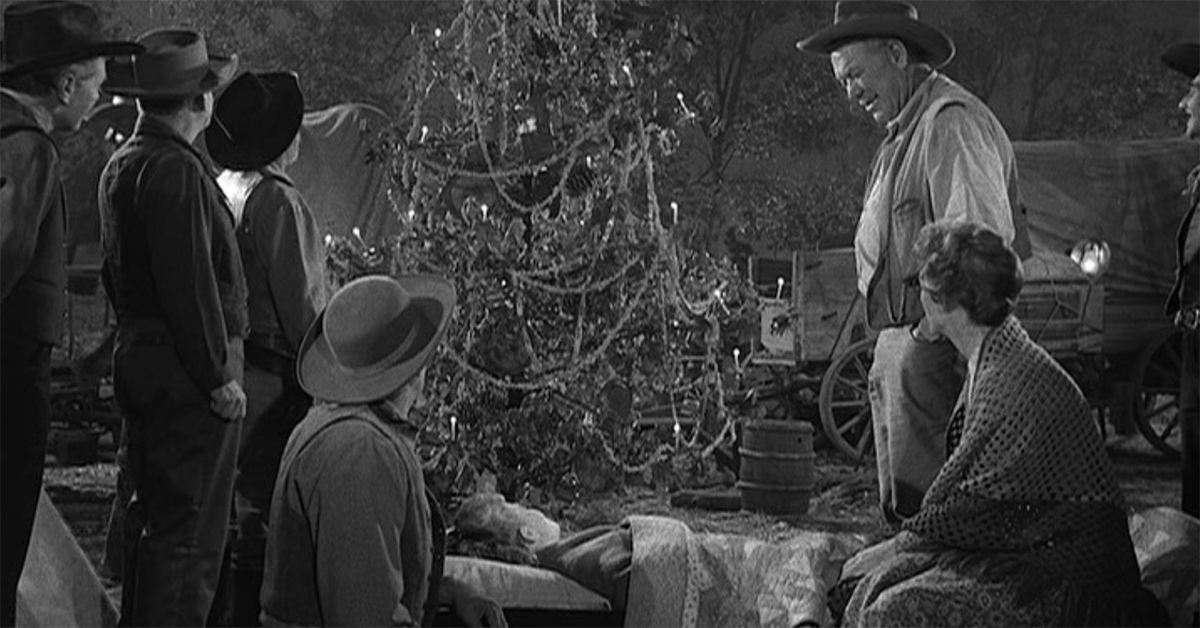 Meanwhile, back in the wagon camp, Sally's not doing well. They've pulled together some gifts and thrown a party, decorating a Christmas tree quickly to give her one last holiday before she dies. As she opens her presents, she asks again and again for Mary Ellen.

It's so sad, you almost want to wad up all that wrapping paper onscreen to blow your nose from all the tragic, festive feelings. 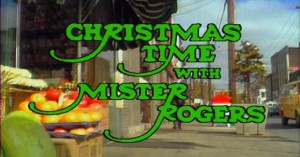 NostalgiaChristmas
40 years ago, Mister Rogers took a break from his vacation to film his only Christmas special

When at last Mary Ellen appears, it's with the chief by her side. You might suspect that she's returned with some sort of miracle cure. We're afraid it's not that kind of Christmas episode.

Instead, what Mary Ellen brings for Sally is the White Christmas she always wanted — a small pile of snow from the mountains that she scatters under the Christmas tree. Sally's overwhelmed, and viewers are left to bawl our eyes out as Flint softly sings, "Silent Night."