Where To Watch Shop Store Contact
Home / Stories / Barney Fife is the only character with two musical themes on The Andy Griffith Show
did you know?Don Knotts

The Andy Griffith Show is the best dubbed show in TV history, period.

November 7, 2019, 9:43AM By MeTV Staff
On Now
Barney Fife had two theme songs on The Andy Griffith Show
Up Next:
Share

The music of The Andy Griffith Show is so much more than its iconic whistling theme. According to Earle Hagen, who co-wrote the theme song and composed the show's incidental music, it's still the best-dubbed TV show that ever aired.

In a 1997 interview with the Archive of American Television, Hagen explained that The Andy Griffith Show's use of music was highly unusual for a comedy show, averaging between nine and nine-and-a-half minutes per episode. Hagen is certainly familiar with what the standard is because he crafted incidental music for other sitcoms, including the highly musical The Dick Van Dyke Show. So, it's really saying something that he sees The Andy Griffith Show as his finest work.

"I know of no television on air that has the presence of music like the Griffth show," Hagen said.

The reason The Andy Griffith Show required so much music was because Hagen said there were certain scenes where the drama could be amplified by adding music. The trouble was, if you wanted to score a 30-second segment of the show, Hagen said, you couldn't just bring in music whenever you wanted.

"I don’t care whether you whisper it or you shout it, you feel it," Hagen said. "Even if you bring it in under a sound effect, and it’s just there, the additive of music is noticeable."

That's why Hagen had to find more natural ways to bring music in, which naturally meant more music on the show.

Perhaps the most memorable incidental music to fans were the individual themes Hagen composed for each of the show's main characters, even Aunt Bee. For Andy, Hagen used a variant of the whistling theme, but in the interview, he explained why Barney Fife required not one but two themes to capture the nature of his iconic character.

"I had two themes for Don [Knotts]," Hagen said. "Because Don was a twitchy character, and my philosophy about comedy music is you don’t play things that are funny. You just try to amplify the character visually. If he’s twitchy, I wanted to make it more so. And when he was overbearing, I had a march that was like Dragnet, you know? The ultimate cop on the beat. So I had two themes for Don." 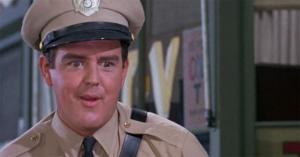 Listen carefully next time you're watching an episode and see if your ears can pick up on these two different themes repeated throughout the show's run. (You can also hear them both in the video at the top of this post.) Once your ears get tuned into Hagen's sounds, you'll likely also pick up on all kinds of fun decisions the sound team made.

Hagen said The Andy Griffith Show's sound team was "just a bunch of highly theatrical, motivated people" willing to challenge dubious dubbing calls when necessary to make sure the sound on the show was the best it could possibly be.

"There were times when we’d go and fight with the dubbing crew," Hagen said, citing an example that'll make any Andy fan smile, "Was the tire squeal more important than the music we were doing at that point in time?"

Above all, Hagen said the reason why music became such a subtly affecting factor of the show was as simple as everything else in Mayberry.

"There was an attitude about the show that added long spaces of time," Hagen said, explaining how The Andy Griffith Show would linger in moments, allowing the audience to really settle into a scene. To make everything feel just right, Hagen brought in music.

"I would always try to find someplace, even if it was four minutes earlier, to bring the music in so that it developed along with the scene and then arrived at that 30 seconds, which was invaluable," he explained. "And it worked. Incidentally, that was the best dubbing job in television."

Did you know?
The real-life Floyd the Barber cut hair until he was 90 years old
Are you sure you want to delete this comment?
Close

AnnaRentzVandenhazel 10 months ago
I'm glad to see I'm not the only person who didn't absolutely love every single TAGS episode. I got torn limb-from-limb on the TAGS Facebook page for having THE AUDACITY to point out that episode #3 annoys me as an adult (who unfortunately has to visit a pharmacy often for prescription refills). That's where Ellie refuses to let Emma have her blue pills without a prescription, only to find out later that they were sugar pills. If a real pharmacist had dealt with that situation, they would have known whether the pill required a prescription (or taken the time to check if they weren't sure). Oh boy, the people there were far more upset that I dared criticize one freaking episode than I was by the show itself! When some resorted dirty name calling, I blocked them and unliked the page. Those people need to "lighten up" like they said I should do. Even Andy himself supposedly didn't love the first season!
Like (1) Reply Delete

Pacificsun 39 months ago
What an interesting article, thank you! Saying something about the music on these Classic TV Shows is not often revealed. In fact it can be said that virtually all characters (particularly) in the MeTV lineup of classic TV shows has their own theme. But to the subtle degree that Hagen describes about TAG's characters, maybe not so much. The art or tradition comes from classical music itself, where the composition is tied together by a leit motif (or a recurring sequence of music) after variations of it have been played. Kind of like tying together separate paragraphs in a long composition with a bridge. To ensure its overall theme.

Star Trek:TOS has very specific themes (obviously) for their 3 main characters. In watching the reruns, it's interesting to note when their themes are introduced. Not just in the episode itself, in during which episode. And usually it was the first one that most significantly highlighted one of the characters in crisis or action mode! The romantic themes, were often repeated, when a lesser character (like Chekov) also had a brief romantic scene. So those themes, indicated the type of emotion being displayed!
Like Reply Delete

39 months ago
I can't abide whistling, but loved the music on the Andy Griffith Show, esp. Ellie Walker's theme, Susan Oliver's and of course, Barney's.
Like Reply Delete

harlow1313 Pilaf 39 months ago
The episode with Susan Oliver was a somewhat odd one. She had a strange and alluring effect. She almost glowed.
Like (1) Reply Delete

MagOxide harlow1313 39 months ago
No. No. No. That episode was horrible in my opinion. Andy and Barney were about of character. But maybe that's what they were going to for. Makes my teeth hurt watching that episode. Still watch it though 😆😆😆😆
Like Reply Delete

Pacificsun harlow1313 39 months ago
I would say in every TV show (of that era) in which she appeared, she was unmistakable and memorable. Such a unique personality. And while being similar in many different shows, she was also able to tailor it the specifics of a character. For example, her appearance in ST:TOS and MFU. Two very different roles (purposes) and yet you felt that you knew this particular actress anyway. It was about connecting with the audience!
Like Reply Delete

AnnaRentzVandenhazel 10 months ago
You would have hated watching TAGS with my youngest brother. He was about 10 when they started showing reruns locally in 1978, and he would whistle along with the opening song. But that wasn't the worst part - every 4th note he would purposely whistle off key. Not QUITE on par with fingernails on a chalkboard, but annoying nonetheless.
Like Reply Delete

harlow1313 39 months ago
If I had theme music, it would be The Muppets "Mana Mana Song."
Like Reply Delete