Did you know where the trigger was? 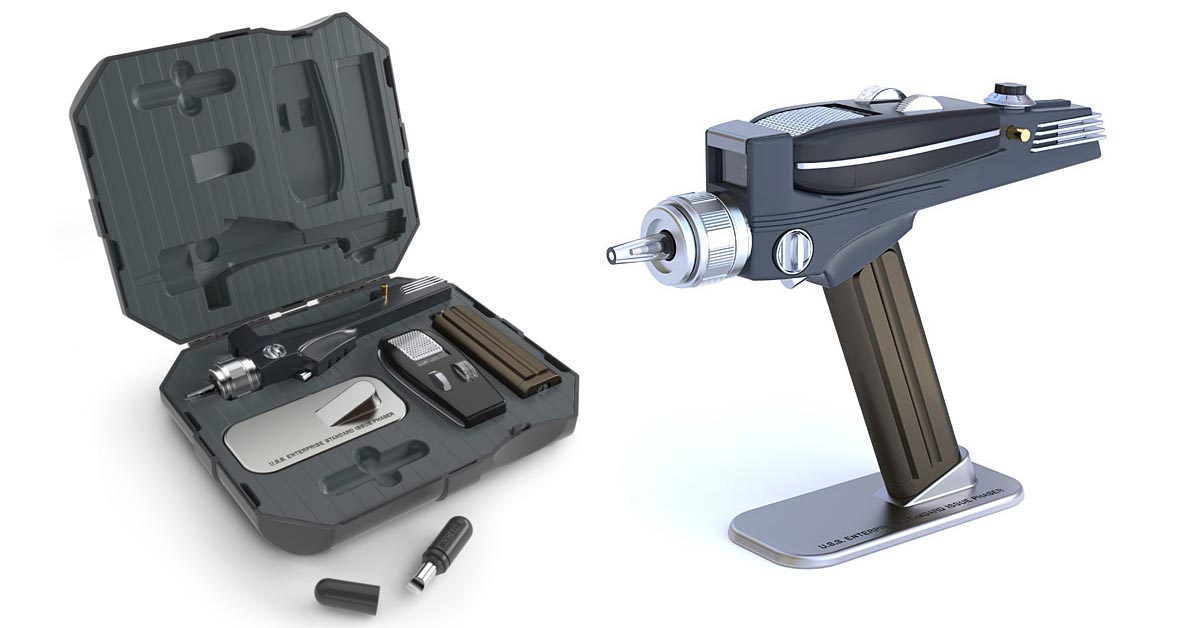 Over the years, toy and model companies have manufactured many replicas of the classic Star Trek Phasers. Each of them had their merits, but nobody had taken it to a meticulous level of accuracy.

You probably remember the Replicators aboard the Enterprise, fantastic machines that could serve up a plate of food or a spare part for Scotty. With the advent of laser scanning and 3D printing, such devices are not so far from modern reality. At last, the last known remaining "hero" prop Phaser from Star Trek: The Original Series has been laser-scanned to create a perfect clone.

Loyal fans of Doctor Who might be familiar with the Wand Company, which has been a go-to source for replicas of the Doctor's trusty Sonic Screwdrivers. The detail-minded company has now turned its eyes on classic Trek. And its detailed Phaser is a must-have for true Trekkies. The $149.99 replica even reveals some heretofore hidden secrets of original props. Let's take a closer look!

The replica comes loaded with all 10 firing sound effects that the phaser exhibited through the years. It has all the working mechanical features, too — most people don't realize all the funtionality that designer Matt Jefferies packed in the details of this prop.

There were two distinct types of phasers used on the Original Series. For those fuzzy on Trek lore, the Type 1 Phaser resembled an electric razor, while the Type II Phaser had a more familiar raygun appearance. The Type I Phaser snapped into place atop the Type II Phaser. The Wand Company packages all the components into a nifty carrying case.

For decades, fans thought the trigger for the Type I Phaser was a bar on top of the unit. Not so! That was a clear targeting screen for distant objects. That notched dial would raise and lower the targeting sight, and the viewer actually worked through the front of prop. The trigger was a small button on the underside the unit.

The Type II Phaser pistol has it's secrets, as well, which the Wand Company has added for the first time. Take the Dilithium crystal chamber on the side, for example, which lights up with power. You can unscrew the chamber door to inspect the glowing dilithium crystal.

See Also: Why did the Redshirts always die on 'Star Trek'? Laundry.

The Wand Company's Phaser is far more sturdy than the original props, with die-cast metal as its primary component. It has a real, solid feel. When you pull the trigger, an inner motor gives you a kick of real power. Oh, and if that wasn't enough, it will operate all your home entertainment devices as a remote control.

You can pick one up at StarTrek.com, ThinkGeek.com, Amazon or Best Buy. Get ready to be stunned.