Where To Watch Shop Store Contact
Home / Stories / These old-school theme park maps helped you find all the fun in the '50s, '60s and '70s
nostalgia

Go back in time for this guided tour of Disneyland, Knotts Berry Farm, Kings Island and more! 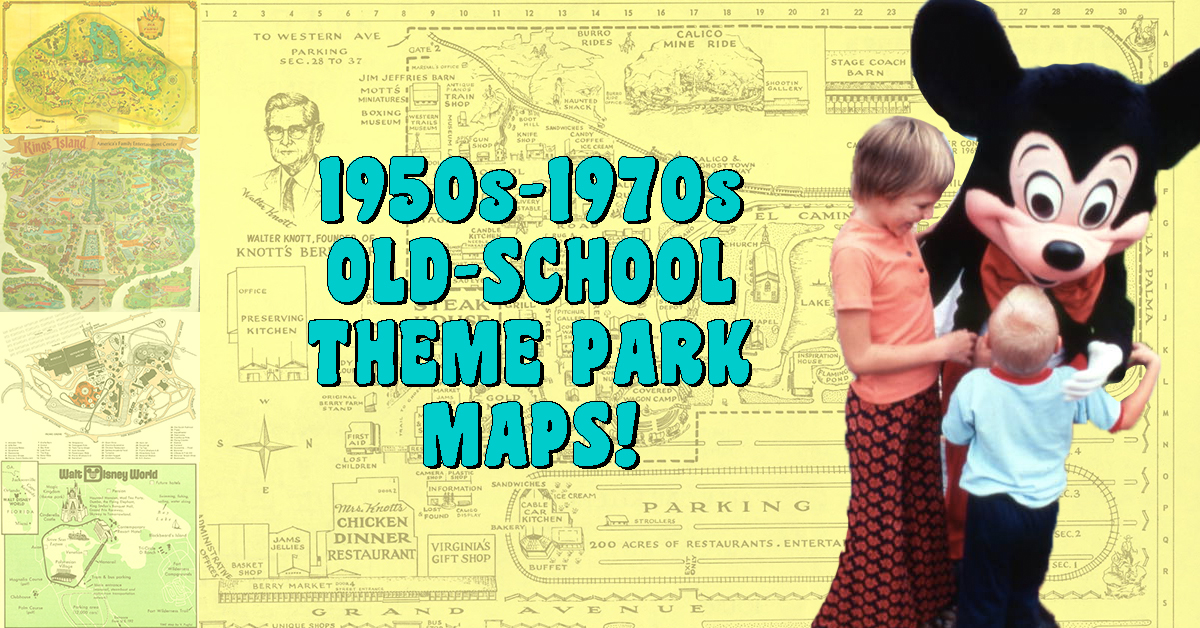 Visiting a theme park for the first time can be a magical and memorable experience at any age, and it's doubly so for the lucky folks who get to experience the excitement of a park's grand opening or grand re-opening. That's why theme park maps can become such a treasured item for many. They map out a very specific memory. 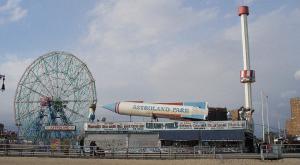 Between 1955 and 1973, some of America's most beloved theme parks made their debut. They grew to become cherished childhood destinations. It was an exciting time for theme park enthusiasts, from Disneyland's opening in 1955 to Hershey Park's mega-rebranding effort in 1972. These were exciting times, and folks adored their theme park souvenirs.

There's no further proof than the collectors' market.  In a recent auction, an original Disneyland theme park map sold for $708,000. That pricey piece of ephemera was no mere flimsy, foldable map you from a kiosk as your enter the ground, but an original artist rendering of Disneyland, drawn before the first ride was even built.

Below, we've collected early maps from seven major theme parks you may have grabbed as a kid, around the time these parks originally started amusing families. See how many of these maps ring a bell!

1. When Disneyland opened in 1955
Anaheim, California

It was an event when Disneyland premiered on July 17, 1955, so much so they even aired the press tours on TV! As you can see by the map below, it's missing popular areas that didn't debut until much later, like Bear Country (1972) and Toontown (1993). The next park expansion is slated for 2019, when Star Wars: Galaxy's Edge is set to launch. 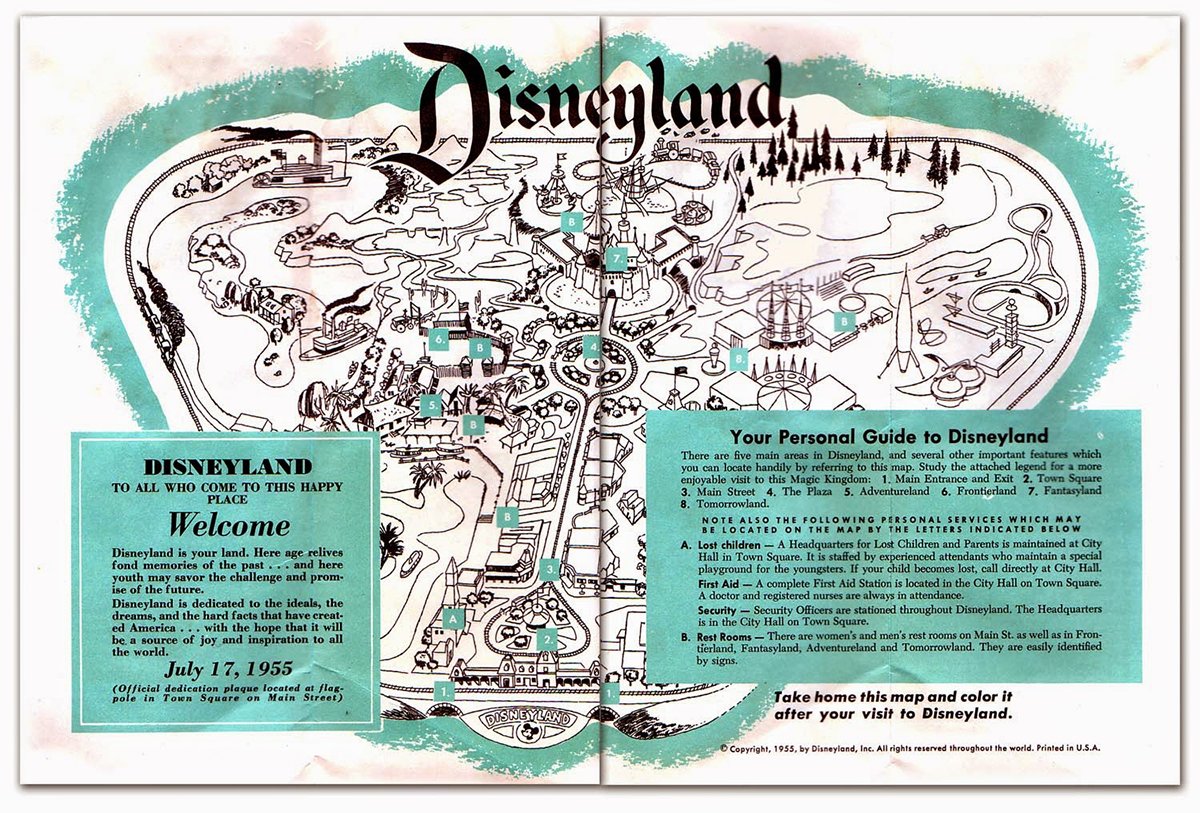 2. When Six Flags Over Texas opened in 1961
Arlington, Texas

The first Six Flags theme park was built in Texas in 1961 and started off with a soft opening, but more than 8,000 people showed up to see what its original 46 attractions were all about. In its initial season, it was open only 45 days but drew more than 550,000 visitors. Now, the Six Flags franchise has more than 20 different parks and entertains millions of guests annually. 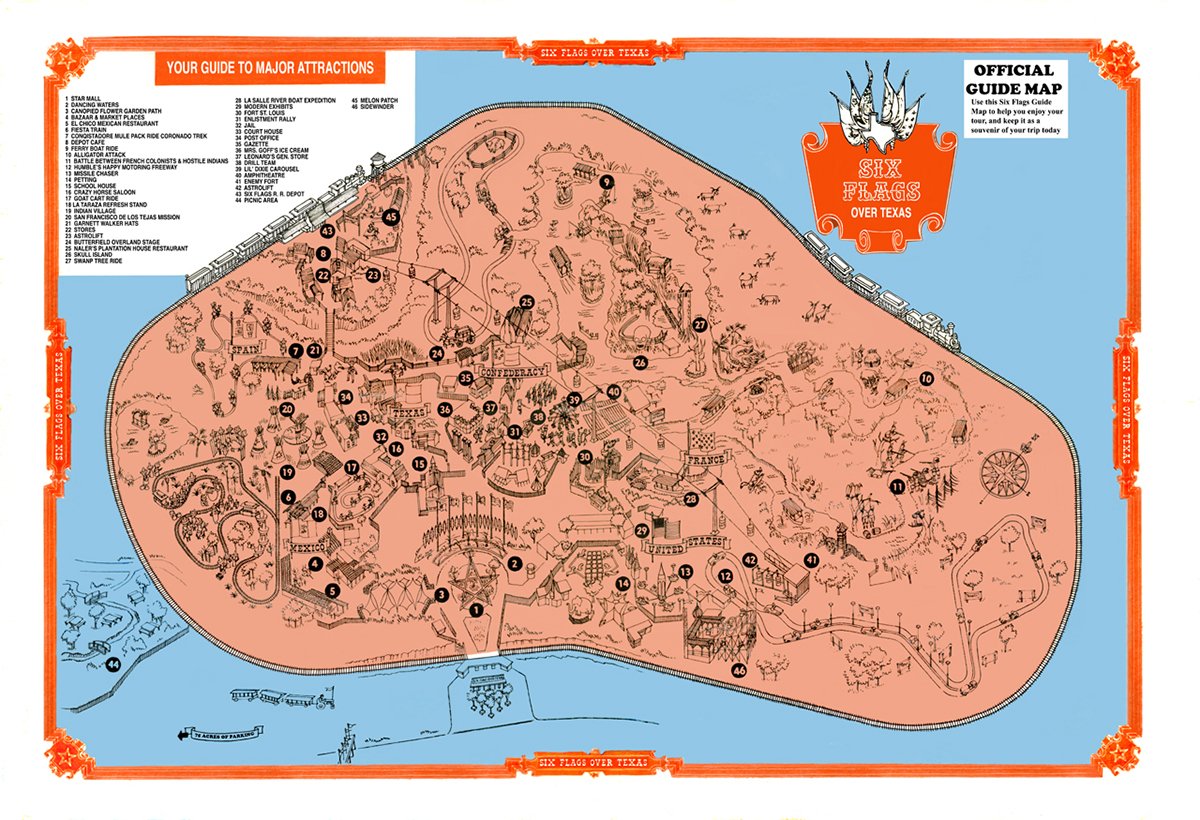 Knotts Berry Farm started out as a roadside berry stand you could visit for free in 1920. After a Ghost Town was added in 1940, though, it began transforming into the amusement park it is today, bringing in rides for summer-long country fairs. In 1968, the transformation was complete, and they began charging admission at 25 cents. By 1969, you could access everything on the map below. 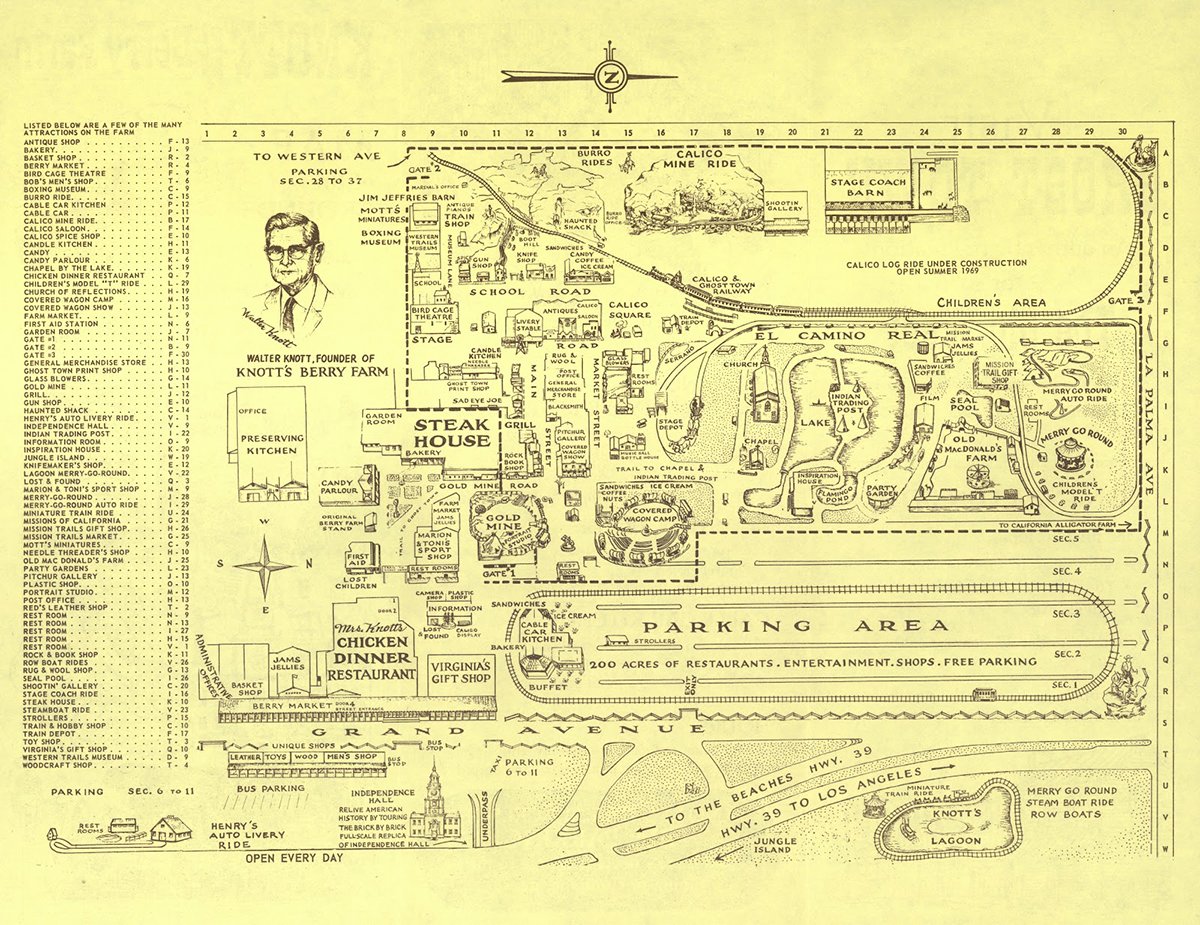 4. When Hershey Park expanded, introduced its first rollercoaster and changed its name to HersheyPark in 1970
Derry Township, Pennsylvania

Hershey Park was founded in 1906 and added its first rollercoaster in 1923. Both were landmark times for residents nearby, but in 1970, the park went through a complete overhaul, massively expanding and drawing visitors by boasting the first looping rollercoast on the East Coast. Today it has 76 rides, but if you visited back then, you likely remember this scaled-down amusement park seen in the map below. 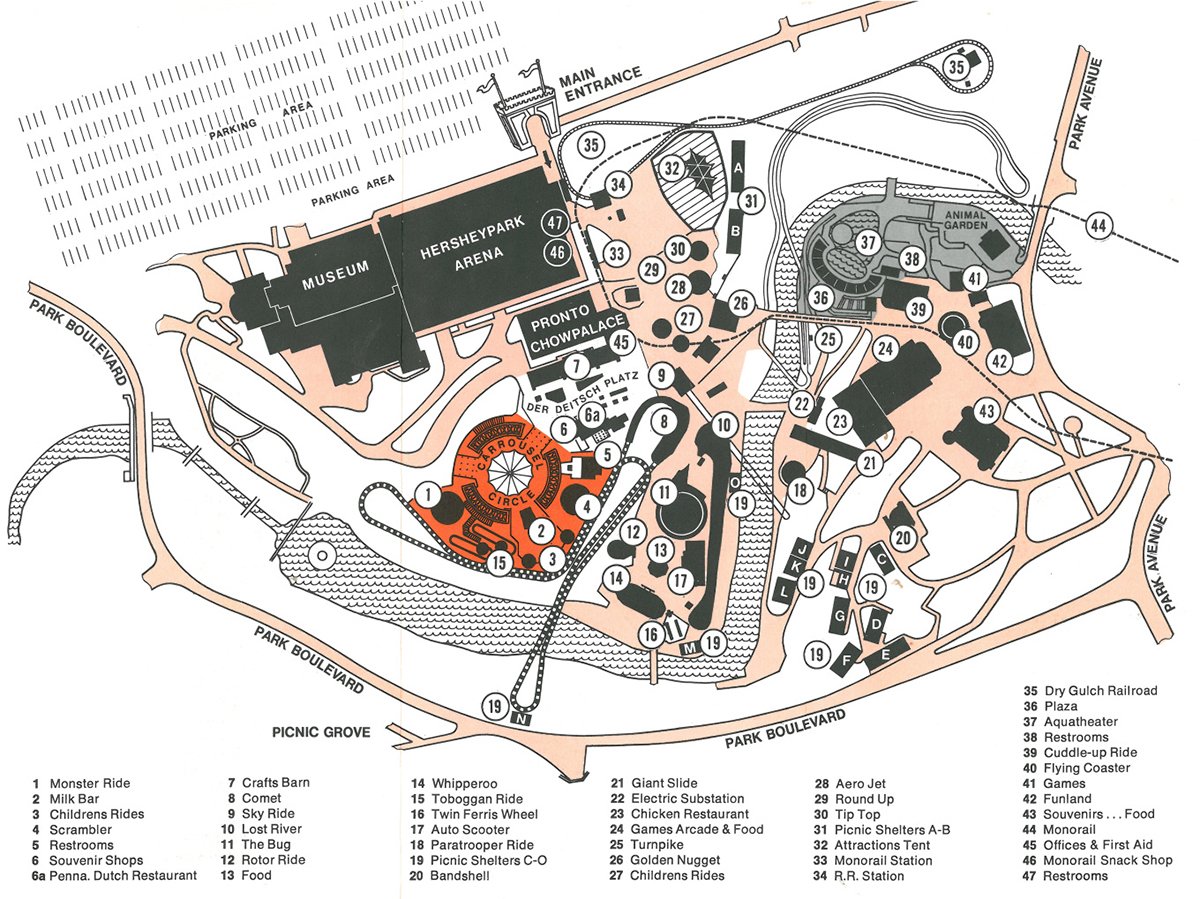 Disney dubbed it "The Florida Project" and started developing it in the 1960s, but Walt Disney World wouldn't officially open its doors until 1971. It was a much stripped-down version of the park we know today, with Magic Kingdom as its centerpiece to a bunch of awesome themed resorts you can see in the map below. They've been re-tooling the park's many amusements for its fanatic visitors ever since, with the most recent addition the Pandora - The World of Avatar in Animal Kingdom in 2017. 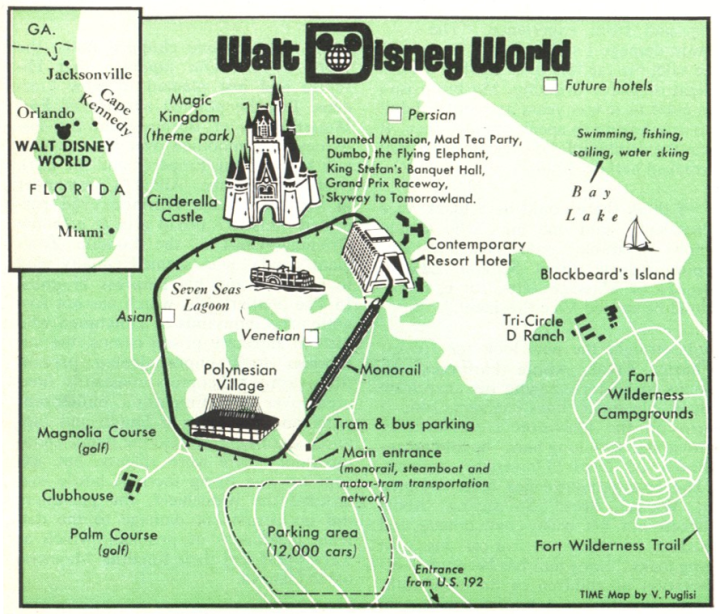 The premiere of Kings Island in 1972 was intended to move and expand upon the popular Coney Island park on the Ohio River. To give the park a new name, they held a contest, and "Kings Island" won by popular vote. Its grand opening was on May 27, 1972, when its most popular attraction was arguably the Racer, a wooden rollercoast with side-by-side tracks for two trains to run at once. Fans of The Brady Bunch will also note the whole family took a trip there in 1973 for the episode "Cincinnati Kids." Coincidentally, a different kind of theme park map heavily featured in that episode, when Jan accidentally swapped out Mike's plans for the amusement park with a poster of Yogi Bear. 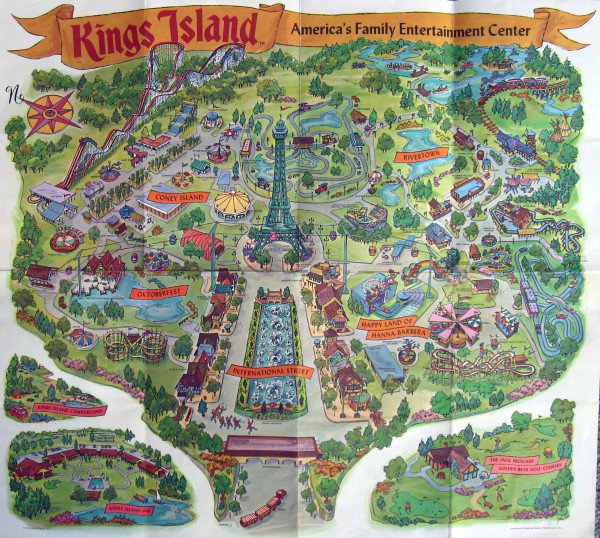 7. When Worlds of Fun opened in 1973
Kansas City, Missouri

On May 26, 1973, theme park-goers were invited to Worlds of Fun for the first time and handed the map below to try to accomplish all the fun of Around the World in 80 Days in just one sitting. Now the park offers 47 rides, including a whole new planet devoted to Snoopy, just for the kids. 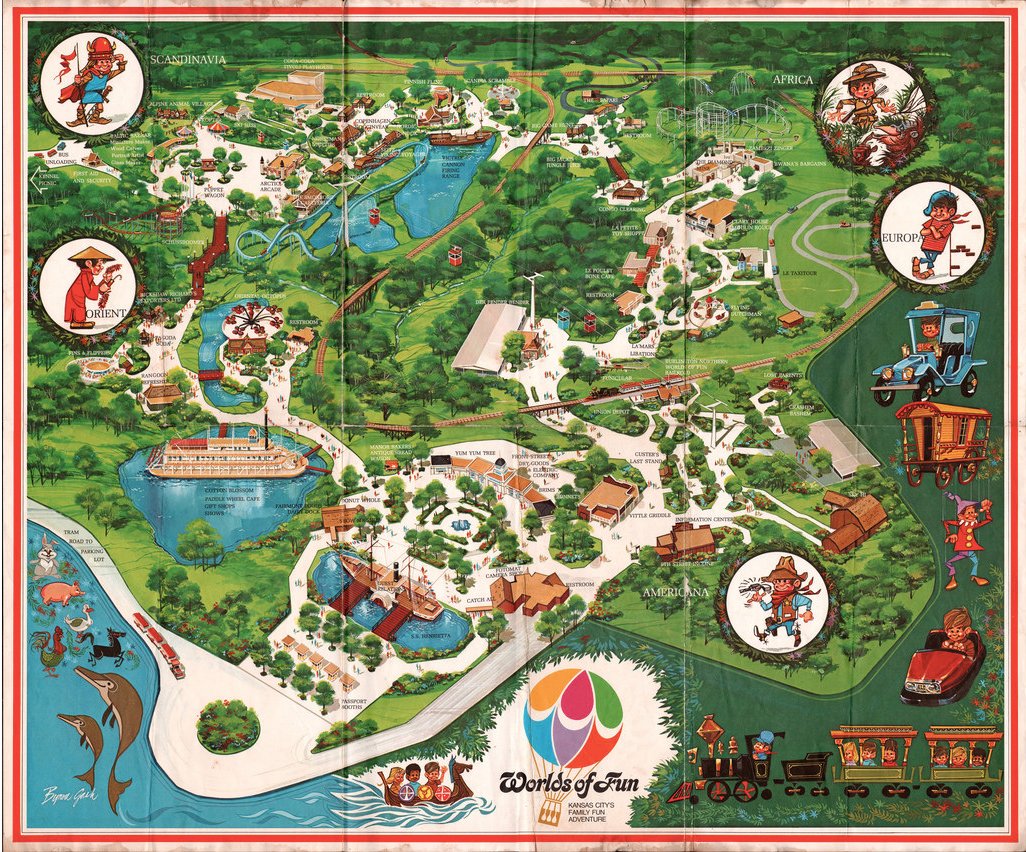 DouglasMorris 20 months ago
loved going to worlds of fun in Kansas City, Missouri as a kid. that was ages ago.
Like Reply Delete

ndebrabant 20 months ago
I have a few Six Flags Over Texas maps. Park sure grew from 1961.
Like Reply Delete