America’s #1 Classic Television Network
Find your local MeTV station
Where to watch
See when your favorite shows are on
See schedule
Personalize MeTV.com to follow your favorite shows
Free sign-up
Shop your favorite shows in the MeTV Store
Shop Now
Home / Stories / The British butler in Columbo's British episode couldn't film in Britain because he was a tax exile
Did you know?

Wilfrid Hyde-White had to film his scenes in California for the overseas mystery! 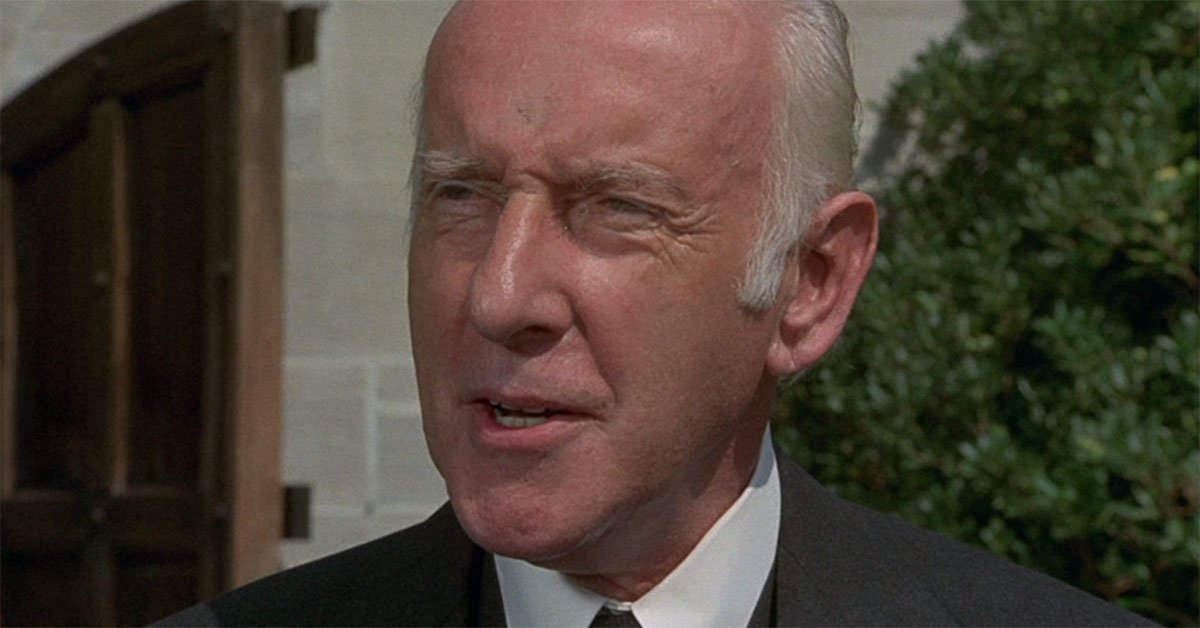 Columbo rarely strayed outside his Los Angeles beat. That makes sense — he was an LAPD detective, after all. But the keen case-solver did manage to travel and work overseas. He took a cruise to Mexico in "Troubled Waters" and crossed the pond to the United Kingdom for the season-two tale "Dagger of the Mind."

"Dagger of the Mind," of no relation to the Star Trek episode of the same name, featured a cast full of beloved British stars. Bond girl Honor Blackman played a major role, alongside Bernard Fox, who you will remember as Dr. Bombay on Bewitched and Malcolm Merriweather on The Andy Griffith Show.

What's a good British murder story without a butler? Enter the august Wilfrid Hyde-White as "Tanner." Most know Hyde-White as Colonel Hugh Pickering in the Audrey Hepburn classic My Fair Lady. Super Sci-Fi Saturday Night fans will also recognize him as Dr. Goodfellow from Buck Rogers in the 25th Century.

"Dagger of the Mind" actually filmed partially on location in England. It's hard to fake Columbo's sight-seeing scenes. We particularly love the moment when he notes that Big Ben is running just one minute slow by his watch. Considering the weather of London, this episode at least gave Columbo a reason to use that iconic raincoat of his. 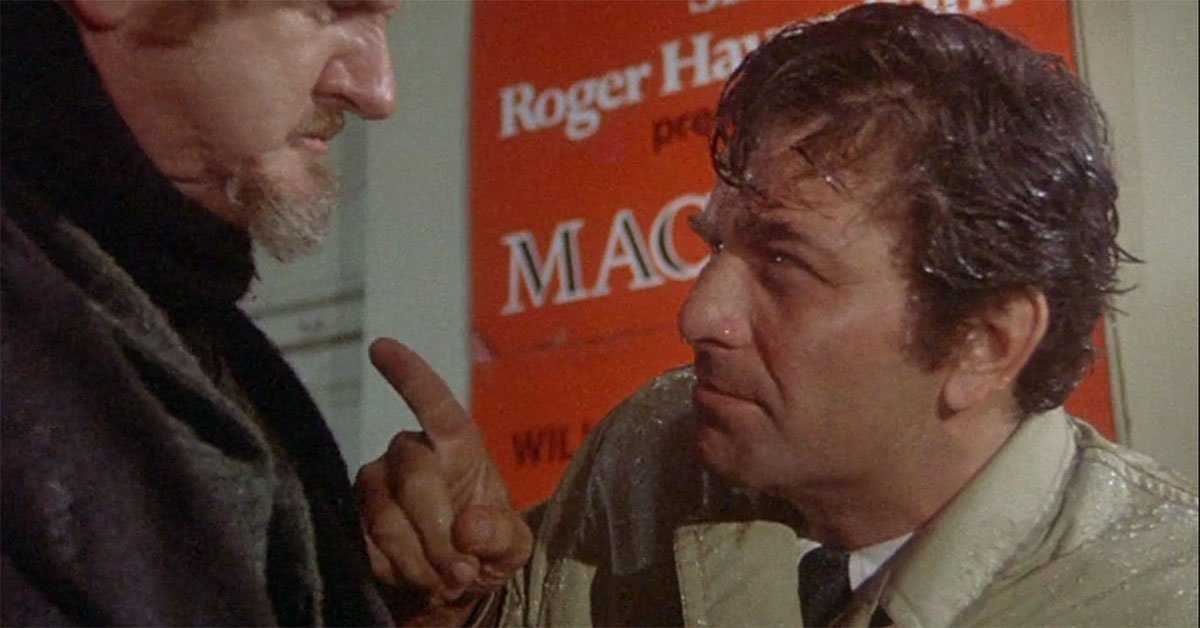 But, this being Hollywood, a good portion of the episode was filmed back in California. In fact, Hyde-White had to shoot in America. He was a tax exile from his homeland. The elder actor lived in America for years to avoid paying thousands of pounds to the Crown.

The Racing Post wrote about his financial troubles: "I really cannot stand another winter in England with the income tax and Violetta [his girlfriend]." Then Hyde-White paused and apologized. "Sorry, that was a very caddish thing to say about the income tax."

He eventually paid up. The piece notes that Hyde-White returned to the U.K. in 1979 "to face the wrath of the Inland Revenue, which entailed several bankruptcy hearings."

During his hearings, the witty Hyde-White was staying at the upscale Savoy Hotel. "But how are you going to pay for it?" a tax collector asked. "You're the financial expert. You tell me," the actor quipped. 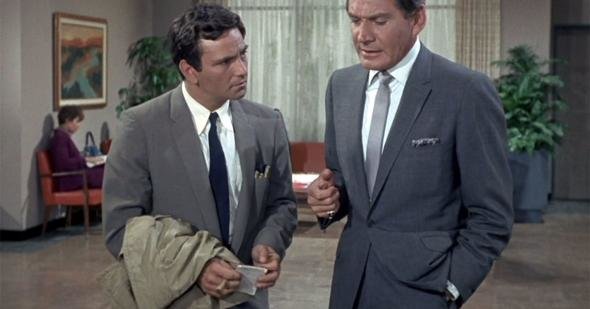 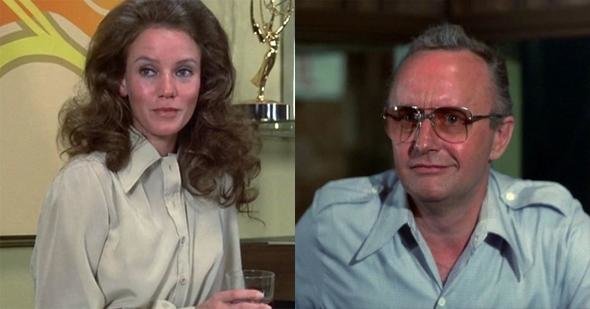 Did you know?
This is definitely not George C. Scott with his wife on Columbo 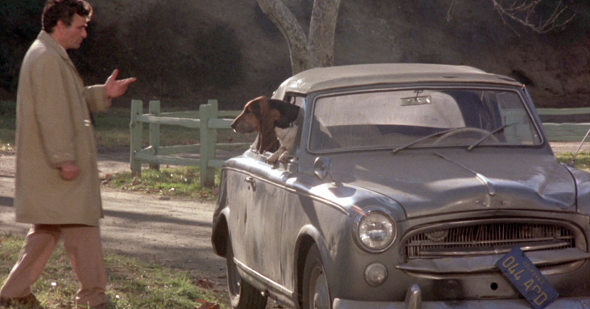 did you know?
Peter Falk got to pick Columbo's car and this is why he chose the Peugeot 403
Are you sure you want to delete this comment?
Close

Dario 13 months ago
A lot of British entertainers have fled Britain and went to other countries or British royal territories that don't require its subjects(a term used in monarchies for "citizens") and legal residents to pay taxes, so they can avoid legal taxation from Her Majesty's government. The Bee Gees lived in Florida for many years because of this; Eric Clapton lived or still lives in the Caribbean somewhere because of British tax laws. So, no one can accuse them of tax evasion when British tax laws are grossly unfair from what one understands about the British tax system.
Like Reply Delete

SteveBingen 13 months ago
Did you notice that in the scenes in this episode shot in Hollywood that the steering wheels on the cars are on the left side, although in the UK they should have been on the right, right? And that "British" estate, by the way, was played by Graystone Mansion, in Beverly Hills!
Like (1) Reply Delete

magnoliasims SteveBingen 13 months ago
Re: And that "British" estate, by the way, was played by Graystone Mansion, in Beverly Hills! It was also Collinwood in the 1991 version of Dark Shadows. Wikipedia lists about 80 movies and TV shows filmed at Greystone.
Like Reply Delete

frances3agape 14 months ago
This chap was dapper and charming.
Saw him on at least one Alfred Hitchcock show.
imdb.com doesn't have much detail on him, but here are 5 more funny/interesting tidbits:
1) "His first wife was a decade his senior. His second wife, however, was thirty years his junior. In the conservative 1950s, the age difference raised eyebrows at the time of his wedding in England, but he later remarked that, as soon as his wife entered her thirties, everyone forgot about it."
2) "I learned two things at drama school: first, that I couldn't act; second, that it didn't matter."
3) "I've owned twelve horses, seven Rolls-Royces, and I've had mistresses in Paris, London and New York - and it never made me happy."
4) "I've never regretted my decision to become an actor. Lots of things have gone wrong and lots have gone well. Now it's almost over and I'll settle for what I have."
5) "He appeared six times on the medical drama Ben Casey (1961) in the 1960s, playing a variety of characters. He told an interviewer that the main reason he appeared on the show so often was that one of the perquisites for guest artistes was a full medical check-up at the Mayo Clinic, free of charge."
Like (4) Reply Delete

MichaelSkaggs frances3agape 13 months ago
I wonder where his money vanished to? (Hint--See Line 3)
Like (3) Reply Delete

Or drag a file here to upload
texasluva 14 months ago
I'm busted. How am I to survive the tax situation I am in. I owe the Crown a lot of dough . Where am I staying? Oh The Savory Hotel
Like (2) Reply Delete
Load previous comments

frances3agape texasluva 13 months ago
Yes, that HALF PERCENT agent fee was memtioned in a bio (on REELZ, BIOGRAPHY or somewhere). Also, Parker's illegal status kept him from booking Presley on FOREIGN concerts because Parker would have been found out. So Elvis missed chances for MILLIONS MORE revenue.
Sigh. Another sad, celebrity tale. A lot of Michael Jackson's life parallelled Presley's.
Like (1) Reply Delete
texasluva frances3agape 13 months ago
Many an entertainer and movie stars have sad tales to hear. Rebel Without A Cause movie. All 3 leading stars died a tragic death. James Dean auto accident before his last movie was even shown. Sal Mineo stabbed to death in the heart when he was 37. Then there is Natalie Wood. Drowning. Carl "Alfalfa" Switzer-shot to death in fight over a dog and money. If its not drugs, accidents or being in the wrong place at the wrong time. The list is a mile long. Read the story of Robert Walker (Strangers On A Train). He died when his doctor gave him a lethal shot that should have never happened. Plus he was held down by a friend when he refused a shot. The drug and alcohol do not mix and stopped his heart in a few seconds. How many rock stars died of overdoses? Yeah Jackson's crazy doc who kept him pumped up until he was done in.
Like (1) Reply Delete

Dario stephaniestavropoulos 13 months ago
Or San Pedro for matter! 😉😁
Like Reply Delete

frances3agape texasluva 13 months ago
And sports stars.
Too much pressure and temptations along with all the fame and money
Started out poor, now middle-class - I would not trade places with ANYONE
Like Reply Delete