Where To Watch Shop Store Contact
Home / Stories / Rod Serling wrote 'The Planet of the Apes' screenplay, but did he write the ending?
did you know?

Rod Serling wrote 'The Planet of the Apes' screenplay, but did he write the ending?

This remains the most disputed fact about one of the greatest movies ever made. 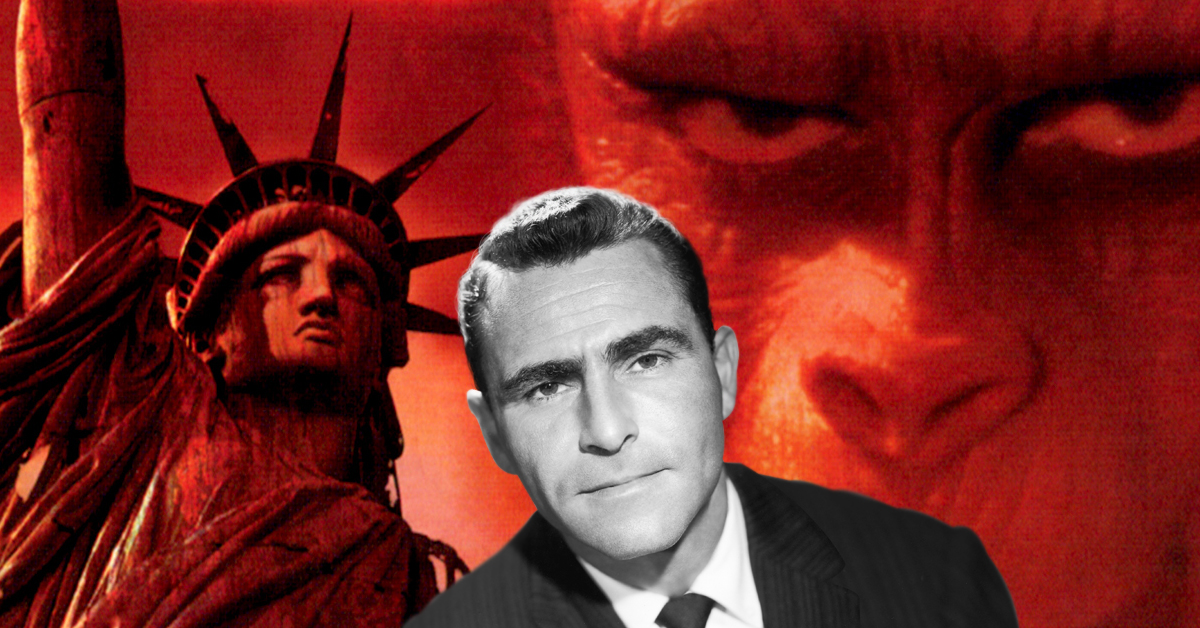 "Beware the beast Man." This famous line from The Planet of the Apes introduced us to a new society where apes ruled the land and man was considered a monster. If you're a fan of The Twilight Zone, this theme likely sounds awfully familiar, and there's a good reason for it. Rod Serling, creator of The Twilight Zone, is also credited as a writer on the 1968 film's screenplay. This intriguing bit of cinema history is often somehow overlooked, but once you learn it's true, it's natural to then assume the famous TV sci-fi writer also wrote the movie's mindblowing twist ending. And depending on who you ask, you might be told that's true. But in fact, the twist ending of The Planet of the Apes is one of the movie world's most disputed credits. Nobody knows for sure who wrote it.

But Serling's pretty sure it was him. As he recalls it, Serling first got involved in bringing The Planet of the Apes to the big screen in 1964. He was approached by King Brothers Productions - a company that got its start in low-budget slot machine movies - and they wanted Serling's help translating The Planet of the Apes novel by Pierre Boulle into a movie on a shoestring budget.

Serling was up to the task, and he not only wrote a manageable screenplay for them, but he also went scene by scene and broke down how to navigate certain scenes to keep the purse strings tight. In the end, Serling was put off by the idea of actors wearing monkey masks and King Brothers thought Serling's idea for an entire ape population couldn't be accomplished with the money they had. This stalled the project.

See Also: Are these townspeople in Mayberry or The Twilight Zone?

Given these impracticalities, the whole Planet of the Apes idea was shelved briefly, until Blake Edwards got involved. Serling said Edwards called him up and said he wanted to keep the movie going, but his budget was way bigger. The question of budget continued to plague Serling's task as a screenwriter, pulling the plot between humble and grand extremes.

As more people got involved in the movie, the budget kept shifting, and Serling kept writing to accommodate these shifts, ultimately penning three screenplays - navigating the extremes between depicting an entire ape metropolis or going with a semi-civilized ape world. There were so many versions, Serling claimed he went through as many as 40 drafts and could've made an entire TV series out of all the unused material. (Just imagine the possibility of that for a second, Planet of the Apes fans.)

All of this is to say that Serling remembers coming up with the Statue of Liberty imagery in his writing process, and many people involved with the movie credit the sci-fi writer for planting the seeds of The Planet of the Apes' memorable ending. Serling even had a draft dated December 1964 that ended with the Statue of Liberty's arm protruding from the ground after the men bomb the ape civilization. However, this isn't enough proof to keep the twist ending's ultimate conception from being heavily disputed between key players involved in the movie.

If you ask The Planet of the Apes artist Don Peters, he introduced the Statue of Liberty imagery in his very first preliminary sketches of the film. Producer Arthur Jacobs claims he and Edwards came up with the idea casually over lunch when they noticed a picture of the Statue of Liberty on the wall at a deli they chose to eat in.

Perhaps in the end, it was a combined effort of all these creative minds. Serling says all along he was more interested in preserving the ending of the novel, and the Statue of Liberty idea was just another idea in the mix. So it seems there's no hard feelings even though this remains a surprising mystery in cinematic history.

For those who are curious: Serling's eventual credit for The Planet of the Apes screenplay was for his work crafting scenes that you saw in the movie, but he credits co-writer Michael Wilson for writing all of the dialog that Serling says is what made the movie such a huge hit as much as anything else. Serling's vision and original dialog is described as more somber, serious, what we'd imagine The Planet of the Apes would have been like if it were an extended episode of The Twilight Zone.

This year The Planet of the Apes celebrates 50 years as one of the greatest movies of all time. While there's no plan in motion to ever bring Serling's original screenplay to the big screen, the good news for Serling fans is that plans are currently in the works to transform that screenplay into a graphic novel. Check out all the details here.

weseld1 23 months ago
So, I take it that in the original book by Pierre Boule, it does not end the same way? Otherwise this whole "inspired by a picture on the wall of the restaurant" tale is pointless.

Stoney 32 months ago
Not too surprising, really. "Planet of the Apes" would work very well as a long Twilight Zone episode.
Like Reply Delete