Where To Watch Shop Store Contact
Home / Stories / Lumpy's mom from Leave It to Beaver later became a Star Trek crewmember
Did you know?

Majel Barrett was Mrs. Rutherford in just one episode. 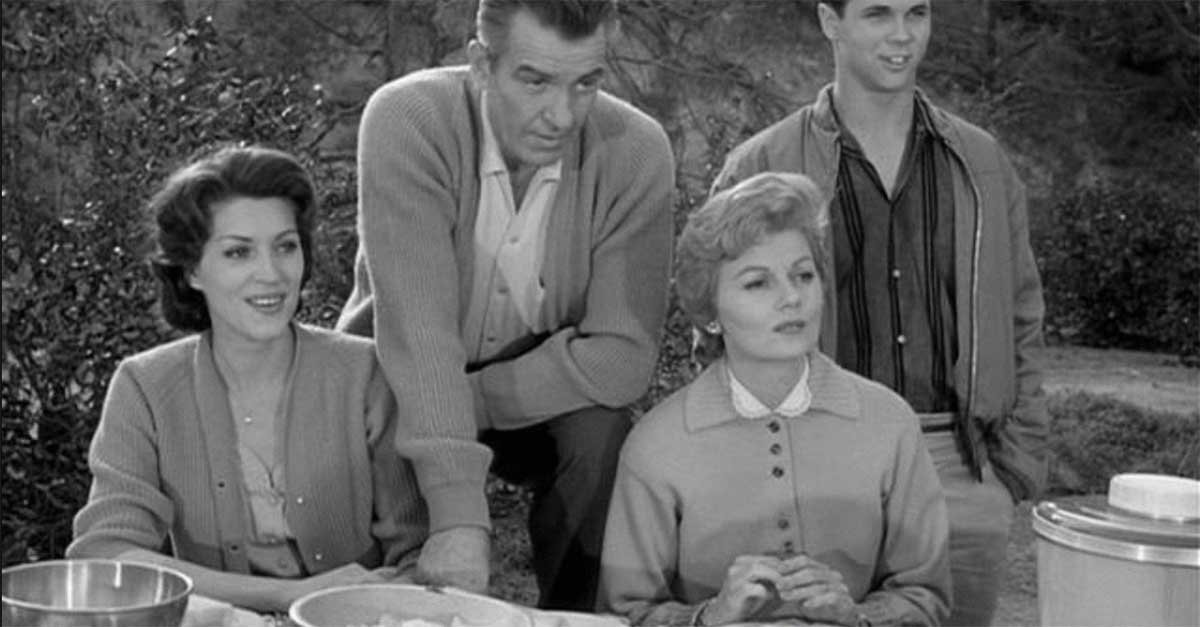 Majel Barrett met Gene Roddenberry in 1961. He was a screenwriter for Have Gun - Will Travel. She was an actor coming off small roles on the Harry Morgan sitcom Pete and Gladys and a Fabian flick called Love in a Goldfish Bowl. The two would fall in love and begin a lifelong relationship. There was just one catch — Roddenberry was married to someone else. And, a couple of years later, as he was working on his own original series The Lieutenant, Roddenberry began a love affair with Nichelle Nichols. In a bold move, according to the biography The Impossible Has Happened: The Life and Work of Gene Roddenberry, he brought Barrett and Nichols together and confessed he was in love with both women. And, you know, still married. It was complicated.

Around that time, in 1964, Roddenberry cast Barrett as a lead in his newest endeavor, a pilot episode for a science-fiction series called Star Trek. Perhaps you've heard of it. Barrett portrayed "Number One," the second in command to Captain Pike (Jeffrey Hunter). Spock was aboard the Enterprise, but Barrett was in the "Spock role." NBC grumbled about Barrett in the role, asking for a man to play the first officer. Test audiences also reportedly complained about Barrett. Roddenberry wanted his girlfriend (one of them, anyway) on the show. In the end, after the pilot flopped, he conceded and recast the show. Barrett joked that Roddenberry kept Leonard Nimoy as Spock and her as the girlfriend, as it was preferable to the other way around.

When Star Trek finally made its series debut, Barrett found another role aboard the Enterprise. Slipping on a blonde wig, she portrayed Nurse Chapel, as well as the voice of the Enterprise computer. Nichols, of course, was sitting at a computer as communications officer Uhura. Nice to know they could all get along.

At last, in 1969, Roddenberry divorced his wife and remarried to Majel Barrett, who remained a constant presence at his side, not to mention at Trek conventions and in further Trek series.

But let's rewind the clock before all that, before Barrett and Roddenberry ever crossed paths. In 1960, Barrett, born Majel Leigh Hudec, landed one of her earliest screen roles on Leave It to Beaver. Despite playing a rather significant side character, the Ohio native appeared in just one episode, "Beaver and Violet."

Majel Barrett and Richard Deacon as the Rutherfords

In that tale, the Cleaver head out on a family picnic with the Rutherfords. Ward works with Fred Rutherford, played by Richard Deacon of The Dick Van Dyke Show. Beaver and Wally know the Rutherford kids well, because son Lumpy Rutherford is their bully-turned-pal and Violet… well, Beaver is sweet on Violet.

Barrett turns up as Gwen Rutherford, mother to Lumpy and Violet. She gets a few lines, climbing into the back seat of the Rutherford convertible next to Ward, sitting at the park bench.

Deacon appears in about a couple of dozen Leave It to Beaver episodes. Violet is in a few. Lumpy is in a load of them. Yet Mrs. Rutherford has those few scenes. So it's easy to miss that this is a future Enterprise legend on the picnic date.

Did you know?music
Listen: Jerry Mathers once fronted a rocking garage band called Beaver and the Trappers

MarkJohnAstolfi 19 months ago
She was only ten years older than her "son."

Pacificsun Flywoman172 24 months ago
And yet you read the article.
Like (1) Reply Delete

teire 41 months ago
Gwen figured in a few episodes, always a good foil for Fred — especially in the Violet episode and the season 1 episode mentioned below. But even in when she had no dialogue you felt the character had Fred’s number.
Like (2) Reply Delete

Jon 41 months ago
Majel Barrett didn't original the role of Mrs. Rutherford. In Season 1, Helen Parrish was the first to play Mrs. Rutherford, but she died of cancer in 1959.
Like Reply Delete

Pozimbo 41 months ago
You say (or at least imply) that, in the run of Leave It To Beaver, Mrs. Rutherford has only "those few scenes". But let's not forget the great season one episode ("Lumpy Rutherford") where the part was played -- hilariously -- by Helen Parrish... (an episode filmed not long before she passed at a tragically-young age).
Like Reply Delete