Where To Watch Shop Store Contact
Home / Stories / Before melting hearts on Bonanza, little Teddy Quinn became famous for one line in a commercial
NostalgiaDid you know?

Before melting hearts on Bonanza, little Teddy Quinn became famous for one line in a commercial

His perfectly timed ad lib made him a nationwide sensation. 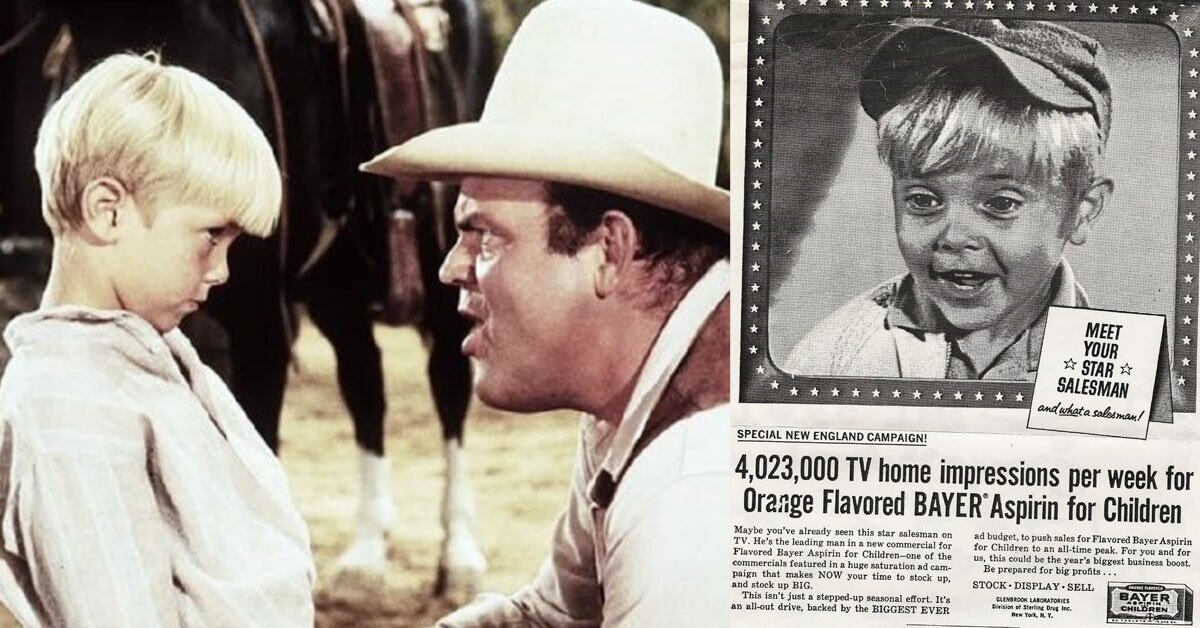 The 1960s was a turning point in American culture for numerous reasons. Music, technology and civil rights activism were just three of many forces driving progress in arguably the most iconic decade of the 20th century.

One other area experiencing transformation was advertising. Gone were the days of formal narration and straightlaced spokespeople talking directly to the audience. As television sets spread across the nation, commercials incorporated a more narrative approach. Scenes and storylines that featured company products played much better than boring monologues and product demonstrations.

As the Eugene Register-Guard put it in 1967, “Gurgling infants, blonde lasses and freckle-faced boys are being employed more and more by advertising agents to persuade adults to buy toys; baby food, soap, cameras, paint, food and household appliances.”

The paper went on to mention one of the most famous child advertisements of the decade, a 1963 TV commercial for children’s aspirin. The spot became universally beloved not only for the message about mothers caring for their kids but for the young actor whose adorable personality shines through with just one line. 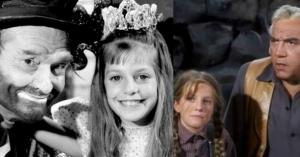 The commercial shows a little boy named Mike at the front door of his friend Susie’s house asking if she’s home. Susie’s mom says Susie has a cold, but reassures Mike that she is okay because she took some children’s aspirin. Susie’s mom explains to Mike that when he feels better after getting sick, his mom feels better, too. Mike responds, “Mothers are like that,” and then, as if realizing the meaning behind his carefully rehearsed lines, the actor playing Mike smiles and adds, “Yeah, they are!”

Those last three words would make four-year-old actor Teddy Quinn a star and a fondly remembered part of Sixties TV to this day. The totally unscripted moment made the ad an instant success and garnered both Bayer, the maker of the product, and Edward Gottlieb & Associates, the agency that produced the commercial, letters of praise from across the country. According to the Eugene Register-Guard, “The agency said one woman wrote, ‘I never thought I’d watch TV for hours hoping to see a commercial. It’s adorable.’”

A trade publication at the time touted over four million TV home impressions per week for the spot and named Quinn a “star salesman.”

Naturally, after a debut like that, it wasn’t long before little Teddy was booking roles in TV and movies. He played an unnamed toddler in the Frank Sinatra Western 4 for Texas and was a child seeking an autograph in the Don Knotts favorite The Ghost and Mr. Chicken. On television, Quinn appeared in My Favorite Martian, The Patty Duke Show and That Girl before playing Jerry Van Dyke’s son in the short-lived 1967 sitcom Accidental Family.

He appeared twice on Bewitched in 1968, one time as a boy who Samantha turns into a dog. He also guest starred twice on Bonanza, including playing the title role in the memorable episode “Tommy” as a deaf boy the Cartwrights take in. His scenes with Hoss are some of the cutest ever seen in TV’s Old West.

Quinn continued acting into the Seventies before pursuing music. He formed the Eighties synth group Telekin whose song “Imagination” was a dance hit in Europe. He was a singer and lyricist for the band, coming full circle from the moment his tiny toddler voice made him a star. 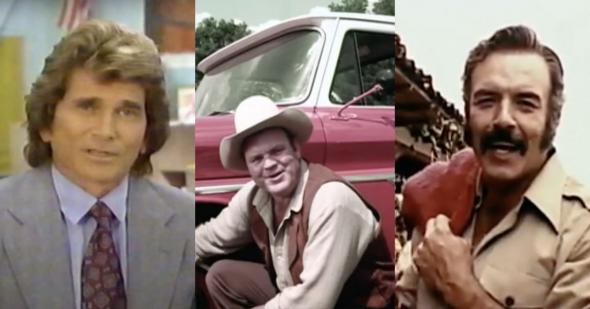 Nostalgia
Can you guess what the cast of Bonanza is selling in these vintage ads? 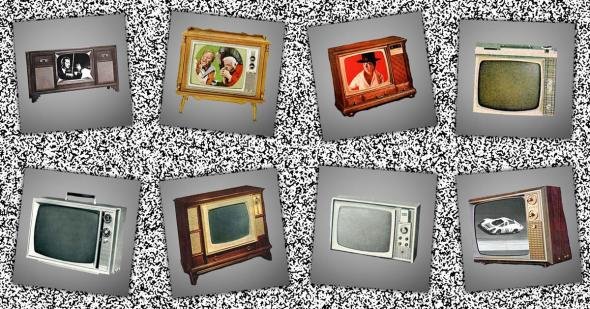 Nostalgia
Can you find the one TV that is NOT from the 1960s? 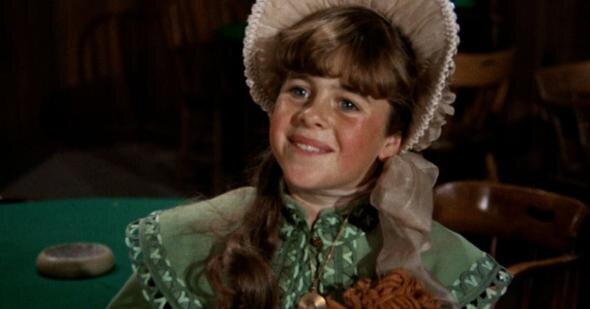 The disappearance of Lisa Gerritsen remains a mystery to TV fans
Are you sure you want to delete this comment?
Close

rhchah 1 month ago
hmmm I've watched a lot of " old shows " don't remember him and what they considered " cute " was probably 😏🥱to me , some like say johnny Whitaker ( he appeared on Adam 12) Angela Cartwright, Ron Howard it's just amazing what they considered to be a cute kid but when you see them you tend think they didn't have the oomph some do to keep at it or some are just " cute pretty " faces that can not act at all .
Like Reply Delete

rhchah 1 month ago
Go away spam
Like Reply Delete

LoveMETV22 1 month ago
Like the commercial link in the story as well as the link to the " Eugene Register-Guard." The video links and newspaper clips work well in some stories. Don't need them in every story/quiz, but a nice added touch in some, as long as the newspaper articles don't have a nag/subscribe with it.
Like (1) Reply Delete

Susan00100 1 month ago
I remember that commercial; Teddy WAS priceless!
It's almost a pity that cute kids like him have to grow up.
BTW, looks like many former child stars segued into the music business after they outgrew their "cuteness".
I'm happy for their success.
Like (1) Reply Delete

Andybandit 1 month ago
This was a cute kid. I never heard of him.

Michael 1 month ago
I haven't thought of children's Aspirin in about fifty years. What a taste. But left it behind when I graduated to the adult stuff.
Like (1) Reply Delete

TlorDagama Michael 1 month ago
Bayer has the same orange chewable tablet in 88mgs for adults taking it for their heart. Comes in 3 packs .. same taste!
Like Reply Delete

Rob Michael 1 month ago
My mom used to give me St. Joseph brand orange chewable children’s aspirin. I miss the taste of it,
Like Reply Delete

harlow1313 1 month ago
I am too cynical to feel any appreciation toward the consciously manipulative world of advertising.

I am too old to be fooled. Joe Willie and JJ cannot fool me. I see through their feeble attempts to move me, all in pursuit of money. To quote the great Gomer Pyle, "Shame, shame, shame."

I have begun to sound like a nut. I must be some sort of jerk.

harlow1313 LoveMETV22 1 month ago
No, I was pretending to think that the J.J. character appeared on "Full House." Pretty darn funny, heh?
Like (1) Reply Delete

LoveMETV22 harlow1313 1 month ago
I like a few episodes of Full House at a time, no more than(2), they don't need an afternoon block of the show.
If they ran Good Times in the same slot. I would choose GT over FH.
JJ must have decided to retire or semi- retire. It makes no sense beyond compensation why celebrities appear in the Medicare endorsements.
Like (1) Reply Delete

KJExpress CaptainDunsel 1 month ago
I had the same thought about Match Game!
Like Reply Delete

MrsPhilHarris 1 month ago
Cute kid. You won’t find anything called children’s asprin anymore. It was discovered that children shouldn’t take any kind of asprin due to Reye’s Syndrome.
Like Reply Delete

Coldnorth MrsPhilHarris 1 month ago
Years ago I knew the parents of a beautiful 6 year old girl who died of Reyes’ syndrome. So sad
Like Reply Delete

TlorDagama MrsPhilHarris 1 month ago
I took St Joseph's aspirin all my life as a kid with bronchitis. Now I take the same asprin for adults same orange taste too!
Like (2) Reply Delete

MrsPhilHarris Dayna 1 month ago
That’s right. In fact that is the first time I had ever heard of Reye’s Syndrome.
Like Reply Delete

LoveMETV22 1 month ago
Cute story. Wow all that attention from an aspirin commercial. Gives new meaning to
" take two aspirin and call me in the morning."
Like Reply Delete