The chemistry of the M*A*S*H cast is famous in TV history. But for the actor at the center of the show, Alan Alda, it was simply a reflection and extension of the acting bond he’d formed with his longest collaborator: his famous performer father, Robert Alda.

Alan Alda will forever be known as Hawkeye Pierce, but as an Oscar-nominated, Emmy-winning actor, he is very much his father's son. In his biography, Alda wrote about how his experiences onstage with his dad helped set him (and ultimately M*A*S*H) up for success:

“There were many things that made the show work: the writing; the skill of the actors and directors; the power of knowing that real people lived through these stories. But this feeling of being a group, sometimes an apparently disruptive group, and the connectedness, the energy, that came from it, was vital. It transformed us; it kept us fresh and glad to be there. I had never been as comfortable working with actors since the days I had acted with the person I knew best – my father.”

Alda then takes time to bring us behind the scenes of his father’s first appearance on M*A*S*H. It happened in the third season episode “The Consultant,” and its charged conclusion created such a magnetic dynamic for viewers that his character Dr. Anthony Borelli is brought back in the show’s eighth season. Alda wrote:

“After a few seasons on M*A*S*H, I heard that my father had been asked to do an episode with us. I could see the excitement in his face, and I felt the same excitement. We hadn’t acted together for a long time.”

What happened next would make just about any father's child or child's father with a good-natured rivalry reading shake their heads and smile.

Alda wrote, “He was playing a surgeon with a drinking problem, and the script called for a confrontation about his drinking at the end of the show. Just before we shot the scene, I found him sitting alone in the Swamp going over his lines, and I asked if he wanted to run the scene with me. He said sure and we started trading lines, but halfway through, I stopped.”

Alan goes on to set this charming scene. When he encountered his dad Robert then, just before shooting that memorable concluding scene, the son couldn’t help but reverse roles with his dad. You can hardly blame the son; he was jockeying for respect for his own talents on the set of his own show. Here’s how Alan remembers crossing a certain line with Robert, after stopping his dad mid-scene:

“Maybe if you did it like this…” Alan said, “and I gave him a different reading.” The show’s star immediately clarified: “This wasn’t one of the shows I was directing. I was stepping in where I shouldn’t have, but he let me.”

In the book, though, Alan admits the truth: “But I was directing him. I was still doing it: I still wouldn’t let up on him. I couldn’t figure out why I had this rivalry with him.” 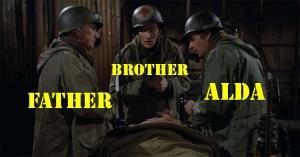 Good thing for the younger Alda, his dad was up for his son's meddling, and their shared scene came off as compelling as some of M*A*S*H’s most defining moments. Undoubtedly, that onscreen chemistry was due to years of experience between father and son as collaborators, but now we know it was also the influence of the high bar Alan set for Hawkeye’s dramatic scenes. He was determined to find the right dynamic with his guest star, who this time around just happened to be his dad.

Alda wrote, “No matter what progress I made in my work, no matter how smart I thought I was, in many ways I was still an adolescent boy with a father I needed to best.” Fortunately for viewers, this friendly family competition resulted in a pair of impactful M*A*S*H episodes. It also shaped Alan Alda into the TV star he became. Alda summed up their bond, on display in both “The Consultant” and “Lend a Hand”:

“He had been both my inspiration and the one I locked horns with. Acting with him could be like floating on air – but coming offstage could be a hard landing.”

Of course, when it came to M*A*S*H, the father-son team stuck the landing, and in the next episode, "Lend a Hand," a third Alda joined: brother Antony. Find the story behind that episode here.

sadd 36 months ago
My real time work with facebook Im making over $2000 a month operating low maint­enance. I continued h­earing distinctive people divulge to me how an lousy lot cash they can make on line so I selected to research it. All topics considered, it become all legitimate and has without a doubt changed my life. For more statistics visit below site
.....www.mywork5.com
Like Reply Delete

Pegs 36 months ago
Thanks for this story. Every time I see The Consultant, I wonder if after the director yelled Cut! (or whatever actually happens) Alan turns to Robert & sobs "I'm sorry Dad! I didn't mean to be so vicious!" Or something like that...
Like Reply Delete