Watch: Maureen McCormick's favorite moment on The Brady Bunch was this adorable song and dance with Florence Henderson

Recently, The Brady Bunch cast reunited on The Today Show.

May 3, 2019, 10:50AM By MeTV Staff
On Now
This adorable song and dance routine is Marcia’s favorite moment on The Brady Bunch
Up Next:
Share

It was Family Night Frolics at Westdale High School on The Brady Bunch when Maureen McCormick said she got to do her all-time favorite scene with cherished sitcom mom Florence Henderson.

As Marcia and Carol Brady, the mother-daughter duo wore oversized clown suits, displaying some vaudeville chops, including Carol popping out, then spilling out of a trash can to link arms and launch into song with her oldest girl.

Recently, The Brady Bunch cast reunited on The Today Show to celebrate the 50th anniversary of the sitcom and share their favorite moments. Their appearance kicks off with McCormick and Barry Williams singing not "Sunshine Day," but this other song that Marcia and Carol performed at Family Night Frolics.

It's soon revealed the reason the TV siblings are singing this tune is because it's from McCormick's favorite episode of the show. "It's so beloved," McCormick said of The Brady Bunch's legacy, "I think it's because when we were doing it, we were having so much fun. It was just so natural, and I think we all cared about each other so much." Watch the clip above to see how much fun it really was.

That episode was called "The Show Must Go On??" and in it, we discover Carol – who we learned has the voice of an angel in the Christmas episode – has incredible stage fright when it comes to performing for the other mothers, especially considering they paid to see her. It's a sweet, sympathetic moment for the classic sitcom mom to show her own insecurities, but ultimately, Mike helps to guilt her into agreeing to do the song with Marcia. 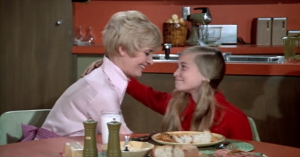 The song they perform is called "Together (Wherever We Go)," which was first heard in the 1959 musical Gypsy, when it was originally performed by Jack Klugman, Ethel Merman and Sandra Church. It's since been sung by everybody, from Bernadette Peters to Angela Lansbury, with Bette Midler doing it on the big screen in the 1993 movie, as well as Liza Minnelli and Judy Garland once performing it as a duet live. Marcia and Carol are in good company with this song choice, written by Stephen Sondheim and bouncing on lyrics that fit snugly to The Brady Bunch's good-natured vibe:

"Through thick and through thin, all out or all in. And whether it's win, place or show. With you for me and me for you, we'll muddle through whatever we do. Together, wherever we go."

The song ends with the mother and daughter collapsed on a green prop bench, both seeming sweetly winded from one of the biggest shows The Brady Bunch ever put on.

McCormick said that while costars like Williams, Mike Lookinland and Eve Plumb preferred those moments that took the cast to the Grand Canyon or Hawaii, her favorite moments actually happened offscreen: “My favorite memories of filming, I think, were when we weren't filming, and we were just hanging out on the set as friends and spending weekends together. It was like a second extended family.”

JohnFinnJr 39 months ago
I always liked the episodes where they were performing something the best. Whether it was a reenactment of the Pilgrims on a home video, or doing the Charleston, or making a silent movie at a movie studio, or performing on some TV talent show singing one of Greg's songs or this episode when Carol and Marcia perform this song. Make note: Mike and Greg performed in that show too. https://www.youtube.com/watch?v=NB0qdfK95hA
Like Reply Delete

stephaniestavropoulos JohnFinnJr 39 months ago
Along with Peter and Bobby. Supplying the rain and the feathers. Mike and Greg couldn't have done it without the aide of sons 2 & 3.
Like Reply Delete