Where To Watch Shop Store Contact
Home / Stories / Do you remember all these 1970s Saturday morning cartoons?
nostalgiacartoons

Do you remember all these 1970s Saturday morning cartoons?

Channel surf through your youth with vintage network ads. 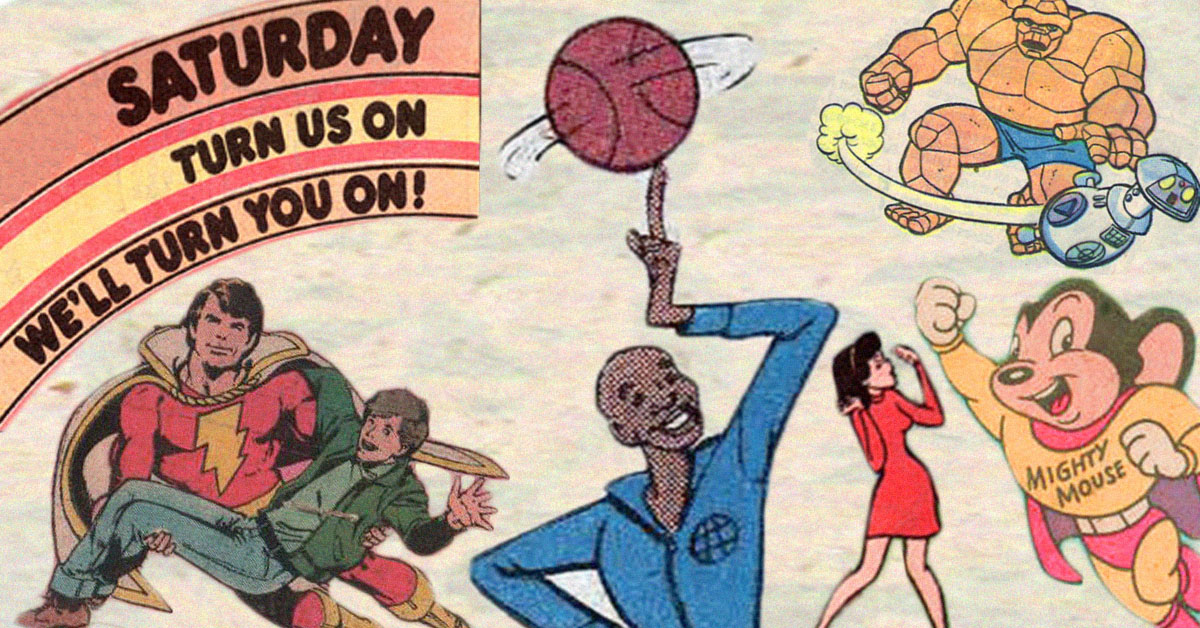 Pour yourself a cold bowl of cereal. We're taking a tour through the Saturday morning lineups of the Me Decade. Cartoons have always been somewhat surreal, but this was the era in which animation got outright weird. Basketball players, talking chimps, soul singers, superheroes and dinosaurs brushed shoulders on the lineup. Familiar characters were sent to unlikely times. Archie was touring America's past. The Partridge Family went to the far future. Meanwhile, Yogi Bear was in outer space. There were also dozens of delightful live-action series.

The networks drew up some colorful advertisements to promote their Saturday slates. These vivid comic strips appeared in newspapers and TV Guide. Here are some of our favorites of the 1970s.

What shows were you watching? 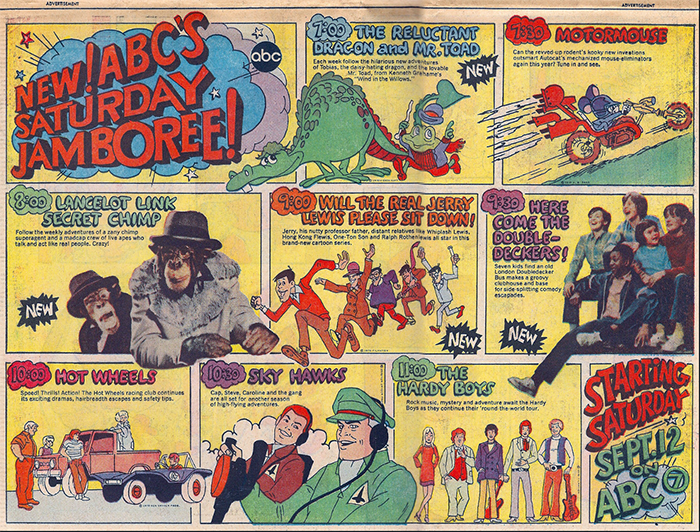 This lineup is loaded with obscurities, from Will the Real Jerry Lewis Please Sit Down! to Here Come the Double-Deckers!, which featured seven kids living in a London bus in a junk yard. 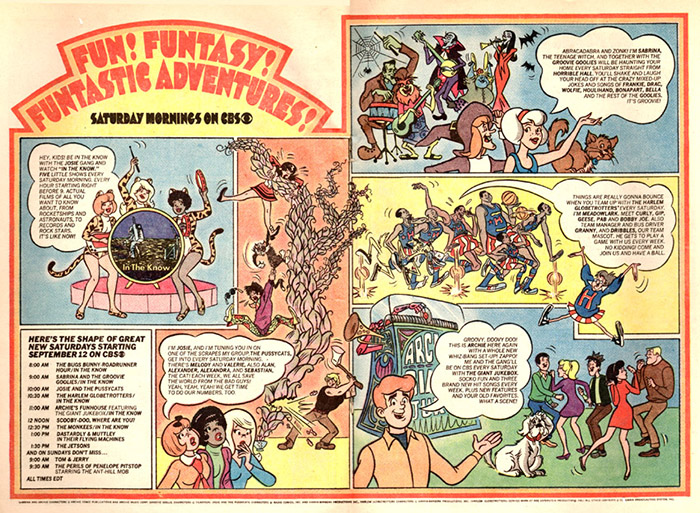 Meanwhile, over on the Eye that season, Archie Comics characters reigned, from Sabrina to Josie. The Harlem Globetrotters led into Archie and his Riverdale gang, though both crews would get significantly weirder in a couple years. 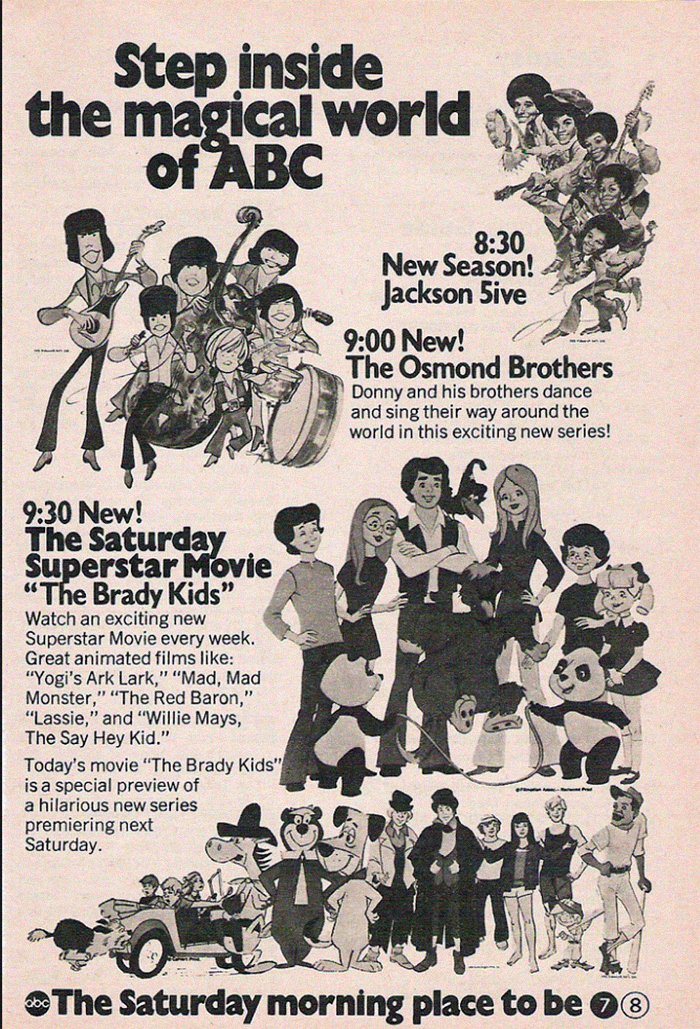 Singing families were the order of the day, with the Jackson 5ive, The Brady Kids and the Osmond Brothers filled the morning. 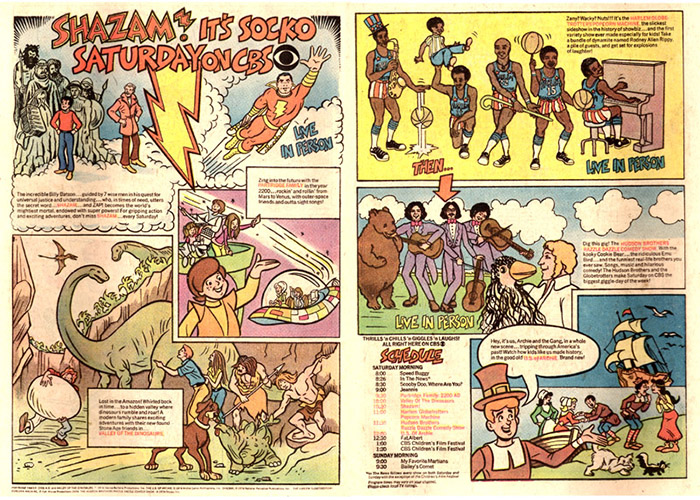 In perhaps the most outlandish lineup of show titles in TV history, kids could binge on Partridge Family 2200 A.D., The Harlem Globetrotters Popcorn Machine, The Hudson Brothers Razzle Dazzle Show and The U.S. of Archie. 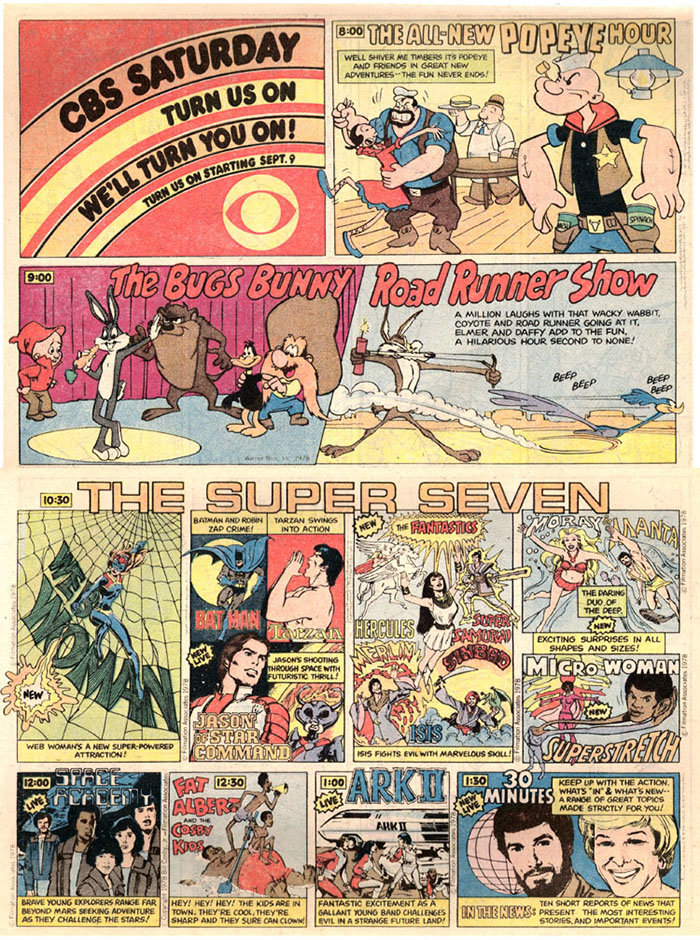 Tarzan and the Super Seven stuff a ton of cartoons into 90 minutes. Lesser-known superheroes Web Woman and Manta may not have been Spider-Woman and Aquaman, but they were close enough. (Though not too close, lawyers.) 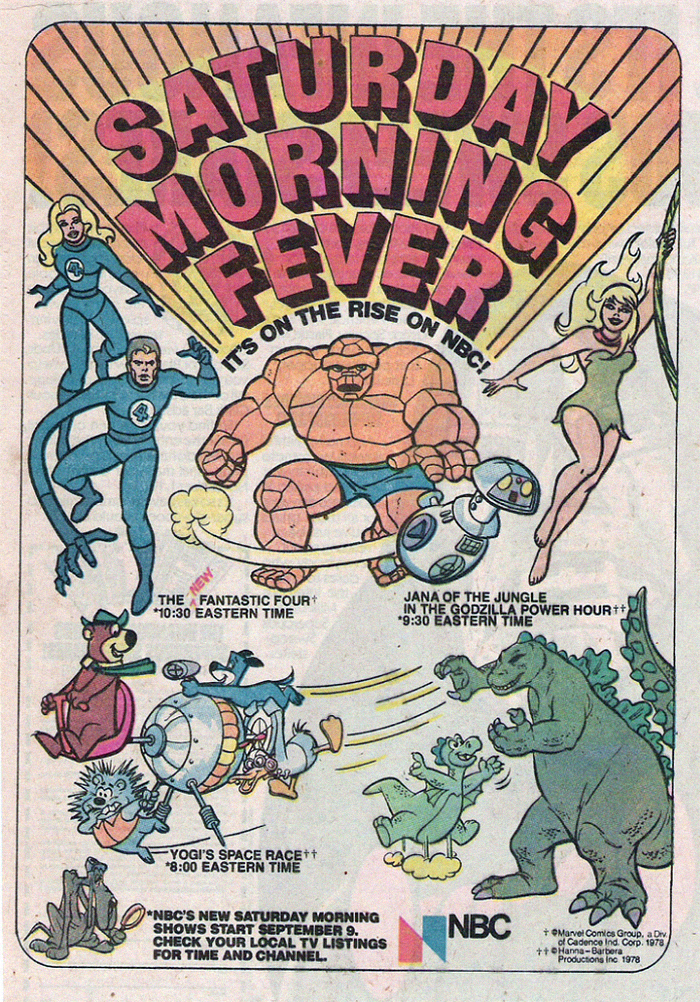 It's the Fantastic Four! Only, instead of the Human Torch, there's a kooky robot. And who could forget Godzilla? 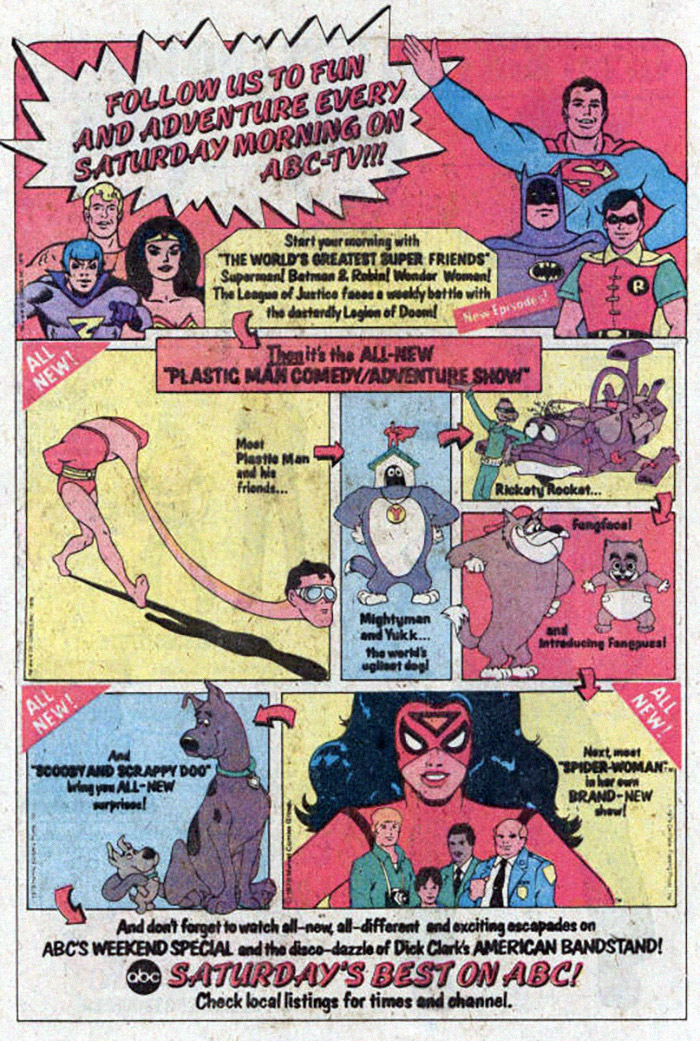 Animators got a little cruel in naming their animal characters with Fangface and Yukk, the world's ugliest dog. 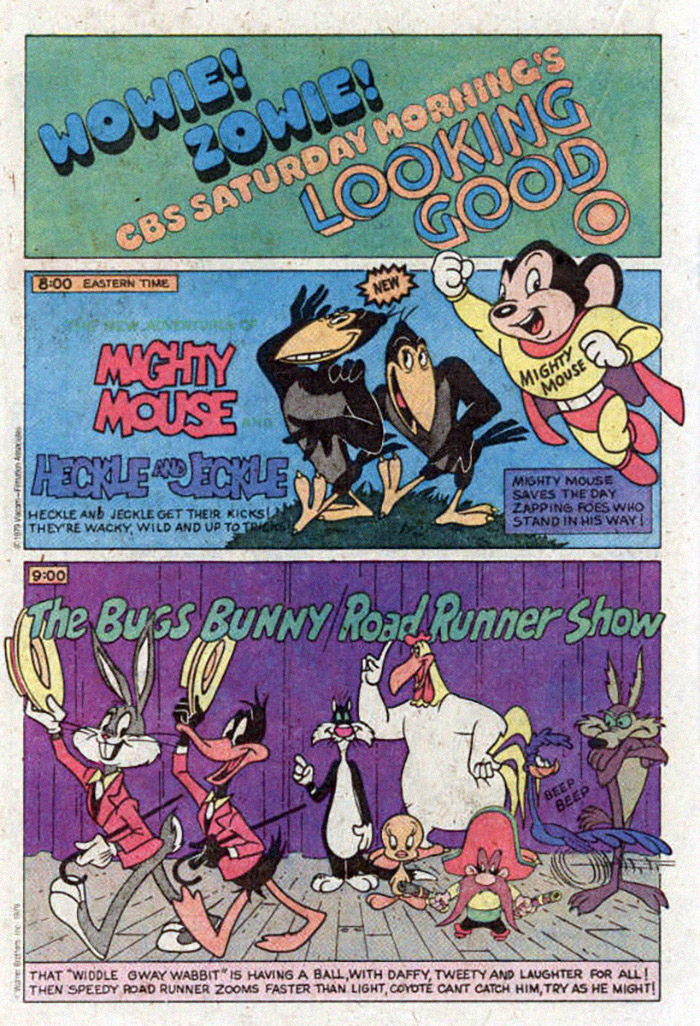 The fare turned rather classic and nostalgic with stalwart characters like Bugs Bunny and Mighty Mouse. 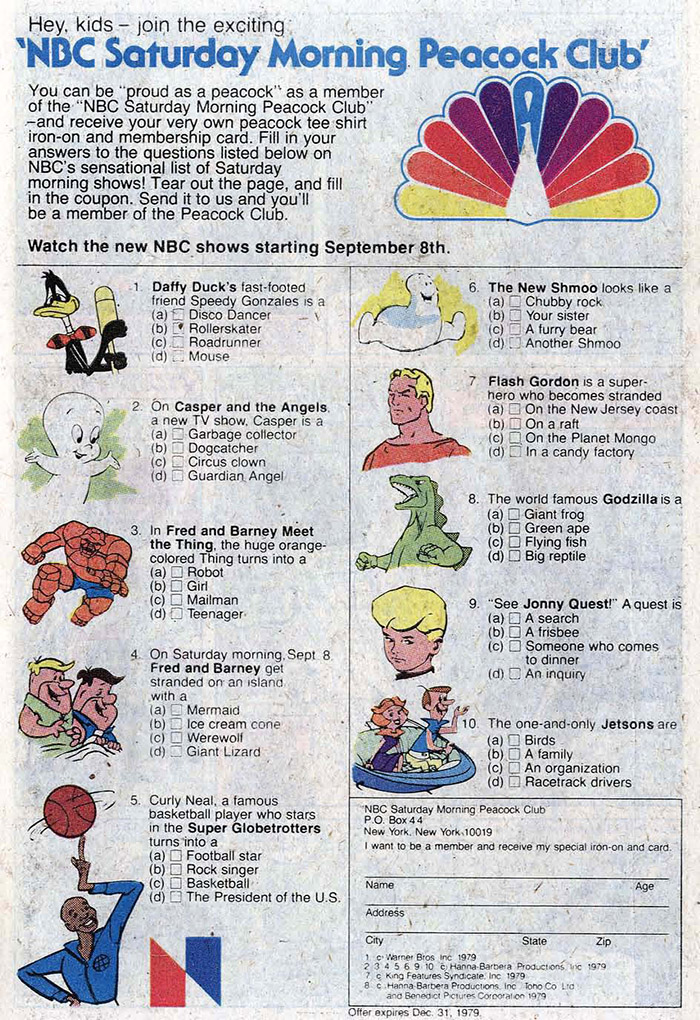 Pop quiz! You didn't think we'd let you reminisce about your school years without a little test? Don't worry, this one is fun — and rather easy.

See Also: This is what the Saturday morning TV lineup looked like 50 years ago

pius 21 months ago
I'd love to see these shows return on Saturdays.
Like Reply Delete

BxHanx 31 months ago
Is MeTV brought those shows back on Saturday morning, I might never get a lick of work done on those mornings.
Like Reply Delete

TommyBrax 31 months ago
Guarantee ME tv rankings will sky rocket by airing Saturday morning cartoons I even enjoyed the commercials. Alternate weekly ABC , NBC , CBS . I was a ABC kid
Like (1) Reply Delete

JeromeSmith 31 months ago
Can Me-TV get access to these shows and help us relive the Saturday mornings of our past?
Like (3) Reply Delete

Amalthea 31 months ago
Oh, my childhood!
Like (1) Reply Delete

TimothyWashington 31 months ago
I think MeTV should show classic cartoons from Saturday mornings from the 60s, 70s, and 80s.
Like (3) Reply Delete