John Anderson played "the craziest, nuttiest guys in the world."

"To every man's son," General Addison Collins says to Hawkeye, raising a glass in a toast to lost soldiers.

On M*A*S*H, General Collins appeared in "Say No More" an episode that builds up to this loaded toast. Throughout the episode, we watched as Collins loses his son in Hawkeye's O.R. and after this toast, the general's tragic experience changes how he views the pins he pushes into his maps marking soldier camps.

The character actor tapped to play General Collins was John Anderson, whose stern features added grit to movies and TV shows for decades.

And he says it all kicked off when he got his butt kicked by Marshall Matt Dillon in what many might say is the most famous fight in Gunsmoke history.

When he got cast in the role, Anderson had some bit TV roles under his belt, but he had yet to do anything that really turned any heads. That is, not until he agreed to take a few punches in Dodge City.

"It was a dream," Anderson said, according to Western Clippings. "The show was a big hit and the role I was playing was a very showy villain with heavy make-up, just a crazy man."

When you watch the Gunsmoke fight scene, it's even more intense than M*A*S*H's somber yanking of emotions that we watched in "Say No More." In fact, on Gunsmoke, there wouldn't be quite another fight scene in which Matt Dillon gets so heated for another two seasons, when "Big Tom" pushes the marshal to fill in and compete in a prizefight.

As Ben Siple, Anderson antagonizes James Arness by laying hands on a woman who the marshal promised to protect. The ensuing scrape found Anderson overcoming Arness, and Arness overcoming Anderson, with both towering men flailing and flung about a circle of wide-eyed onlookers.

The way the fight scene is edited is such a master class in creating a stunning audience experience that film classes have studied the sequence pretty much since the day it aired. The American Cinema Editors saw the fight and turned it into an educational film, and if you look on YouTube today, you'll see it's still common for a film student's first editing assignment to be to reimagine this famous scene.

When it first aired, the eyes in the audience were just as wide as any film editor's. Anderson said he's pretty sure nobody forgot that performance.

"It really opened doors," Anderson said. "I just ran from one show to another."

After taking a beating from Matt Dillon, Anderson appeared on The Twilight Zone, Star Trek, Bonanza, Perry Mason, and many other shows, including just about every Western. He also appeared in memorable movie roles, like playing "California Charlie" in Psycho.

Gunsmoke welcomed Anderson back 11 times after "Buffalo Man," and he appeared nearly just as many times on The Rifleman.

"Johnny Crawford was almost like a son to him because he played in so many Rifleman episodes," said Anderson's longtime friend, actor Marsha Hunt. "When Johnny was a little boy, they really formed quite a bond of friendship."

You can say that Crawford definitely looked up to the character actor, and not just because Anderson was six-foot-two.

"When I was shooting Rifleman, I enjoyed working with him," Crawford said. "He seemed like a very serious actor, and I always admired him. I thought he was so unique … very professional, prepared. He was an inspiration to work with."

Hunt called Anderson a bright, caring person, which resonates with his character arc toward the end of his emotional M*A*S*H episode.

His final scene on M*A*S*H sees him clinking glasses with Hawkeye, then picking up the phone to bark orders that represent a change of heart for the shrewd general. In his career, Anderson was drawn to playing the types of characters where you just didn't know what to expect them to do next, for better or for worse.

"I did the craziest, nuttiest guys in the world and I had a ball doing it," Anderson said. 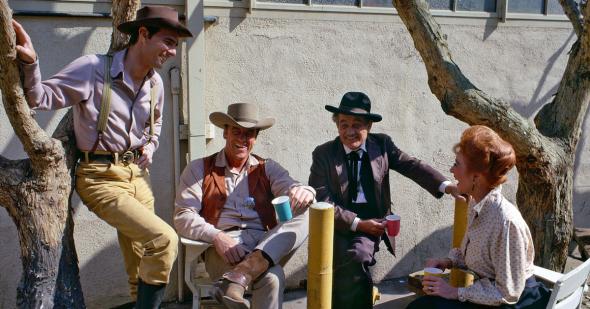 did you know?Westerns
Gunsmoke cost more than $135,000 before filming even began 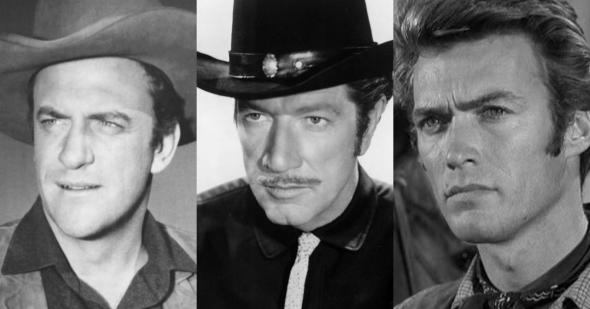 Westerns
Are these Western heroes lawmen or not? 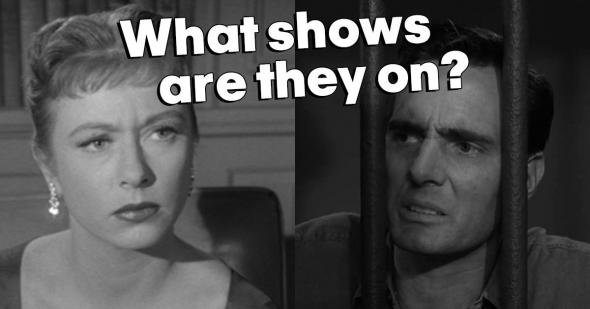 Westerns
Can you guess what other shows these Gunsmoke cast members are on?
Are you sure you want to delete this comment?
Close

Tresix 10 months ago
The scariest role I saw Anderson play on “Gunsmoke” wasn’t an outlaw. In the episode “Mirage”, Festus, drastically dehydrated, kills a man shooting at him in a ghost town. He buries him and marks his grave with a shovel. A man shows up in Dodge claiming to be the man’s father (Anderson) with his daughter and other son. They force Festus to take them back to the ghost town to find the dead son. In the course of the episode, Anderson’s character hits Festus in the face with a shovel and threatens to shoot him even at the risk of being killed by Matt. There’s a scene where Anderson goes after Festus. Festus is running while Anderson walks, it’s like a scene in a horror movie. The reason why Anderson’s character was so scary to me was because, though he had the wrong man, he DID have a right to be angry over the fate of his missing son.
Like Reply Delete

ECO473 10 months ago
Anderson was also quite good as the police captain in "Cotton Comes to Harlem."
Like Reply Delete

audie65 10 months ago
Thank you to the person who brought the capitalization error to our attention. My fifth grade english teacher would be proud of you. Probably the guy that raised his hand with another question after she said we could go.
Like Reply Delete

MannyOlavarria 10 months ago
John Anderson just might be the greatest character actor of all time. Every time I look at a show I have or haven't seen before, there's John Anderson. When I saw him on Star Trek: The Next Generation, I seriously thought he was immortal.

F5Twitster 10 months ago
"In fact, on Gunsmoke, there wouldn't be quite another fight scene in which Matt Dillon gets so heated for another two seasons, when 'Big Tom' pushes the marshal to fill in and compete in a prizefight."

Because it refers specifically to the office Matt Dillon holds, "Marshal" should be capitalized. Full marks for spelling it with only one "l," though.
Like Reply Delete

Wiseguy 10 months ago
John Anderson did not appear on "Star Trek." He was on Star Trek: The Next Generation. That's 20 years later.
Like Reply Delete

F5Twitster Wiseguy 10 months ago
Anderson was on "The Twilight Zone," however -- twice.
Like Reply Delete

olddogg 10 months ago
I still get him and James Gregory mixed up. They seem to play similar characters in their acting roles.
Like Reply Delete

Robertp 10 months ago
If I recall correctly, Anderson’s friend in Buffalo Man was a young Oscar Madison, Quincy, you know, Jack Klugman.
Like Reply Delete

F5Twitster Robertp 10 months ago
Anderson and Klugman worked together in "The Twlight Zone" episode "A Passage for Trumpet."
Like Reply Delete

Or drag a file here to upload
texasluva 10 months ago
Who could ever forget John Anderson. He played many a part. Good, bad guy. Lunatic, officer, car salesman, town leader and more. I remember him in many. Psycho, car salesman (California Charlie) who never sold a car faster then to Marion Crane (Janet Leigh). Of course she had 40,000 different reasons to speed off in her trade in. Twilight Zone-The Old Man In A Cave. He steadfast kept people safe by getting the needed info on contamination from The Old Man (computer). 11 episodes of The Rifleman and 246 total credits in movies, tv shows and appearances. The man just got around. We all benefited from it.
Like (1) Reply Delete

WordsmithWorks 10 months ago
I thought Anderson was excellent in M*A*S*H*. Just the right balance of grit and humanity. Didn't see Gunsmoke or Rifleman episodes (no really a western fan), but did remember him as Gabriel with the Golden Horn in Twilight Zone, Didn't realize he did three other episodes playing some pivotal roles. I remembered them once I saw the listing. Under the radar character actor (aren't they all?) with a boatload of talent.
Like (1) Reply Delete

PortelaJ 10 months ago
Highly respect his skills. First time (I recall) seeing him was on this M*A*S*H episode. How I don’t remember him from anything else before boggles my mind. Ever since then, I enjoy seeing him in his many roles especially all the westerns he was involved in. Top marks in my book not to mention his military duties. I salute you Sir.
Like (1) Reply Delete