Mork's origin story is even nuttier than Robin Williams. Literally.

On February 28, 1978, over 40 years ago, Robin Williams jumped off the television screen and into immediate stardom as the hyperactive alien Mork. The Orkan character came to visit — well, abduct — Richie Cunningham in a season five episode of Happy Days, "My Favorite Orkan."

The title was an obvious nod to My Favorite Martian, and the impetus to bring a sci-fi element to the sitcom came in part from creator Garry Marshall's son, who suggested adding a spaceman to the sitcom. The Marshall kid had just seen Star Wars. And every kid wanted everything to be Star Wars from that point onward, even a rose-colored comedy set in 1950s Milwaukee. 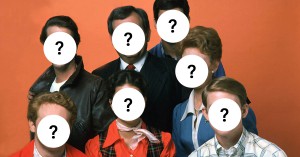 8 actors who were almost cast on 'Happy Days'

However, Mork's true orgin story traces back to another classic TV sitcom, one that similarly had no obvious ties to science fiction. "My Favorite Orkan" is essentially a remake of a Dick Van Dyke Show episode from 1963. With good reason. They both had the same director.

Most fans of The Dick Van Dyke Show will know Jerry Paris as an actor. He played the dentist neighbor and buddy of Rob (Van Dyke) and Laura Petrie (Mary Tyler Moore). His character appeared in 38 episodes of the treasured comedy. However, he had a major hand in far more episodes — he directed 84 of them, more than half. One of the episodes he helmed was "It May Look Like a Walnut," one of the most memorable outings. Mary Tyler Moore bodysurfing into the apartment on a tidal wave of walnuts is a rather unforgetable scene.

Yet the bulk of the episode centered around Rob Petrie's alien paranoia. After watching a spooky sci-fi flick, Rob becomes convinced that Earth is under invasion by thumb-stealing aliens from a planet full of walnuts. Danny Thomas, one of the biggest funnymen in the business, played the alien, Kolak. He's a much sharper dresser than Mork, as you can see up top. Yeah, the whole thing is… kooky. We almost said "nuts."

Paris continued to work behind the camera, mostly notable on Happy Days. He directed a whopping 237 episodes of the smash sitcom. As you perhaps have no surmised, this included "My Favorite Orkan."

When Marshall's son suggested having an alien arrive in Fonzieland, Paris brought up the Dick Van Dyke Show storyline he had overseen in 1963. A new script was quickly hashed out. Mork, and more importantly Robin Williams, became an immediate sensation, going on to his own spin-off, Mork & Mindy. Television truly is a nutty business.