The episode was even written by Shari Lewis the puppeteer! 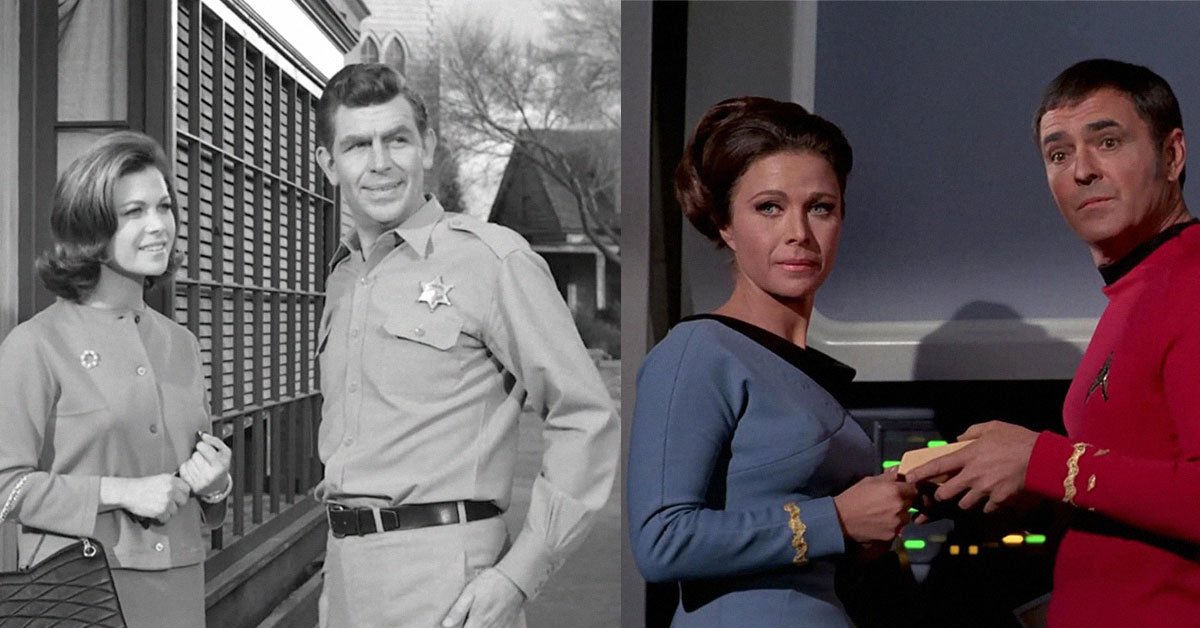 By the fifth season of The Andy Griffith Show, things were pretty serious between Sheriff Andy and Helen Crump. They were two seasons into their courtship.

That's when the episode "Guest in the House" revealed exactly how strong Helen's feelings for Andy had become, when a very attractive woman comes to stay at Andy's house. Helen's jealousy shows she feels threatened by this unexpected intrusion.

Andy calls this woman Gloria his "cousin," not because they're related by blood but because her family and his family have always been close. So when her engagement is broken off and she needs a place to go, Andy welcomes his cousin Gloria. It's all pretty harmless.

For Helen, though, it crosses a line when Andy starts inviting Gloria along on their dates. Comedy ensues when Goober gets pulled into the party as Gloria's last-minute companion.

This moment in The Andy Griffith Show history where Helen gets consumed by jealousy is significant because how Andy reacted to Helen at every turn foreshadowed his eventual commitment to his future bride. This could have easily been the moment when Andy decided Helen wasn't right for him. Instead, he's sensitive and responsive, and fans understand that they're in it together. 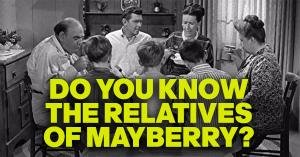 Trivia1960sMayberry
Can you guess how all these Andy Griffith Show characters are related?

So of course, cousin Gloria does not in the end come between Andy and Helen, despite the lovely beauty of the actress who played her, Jan Shutan. Fans of Sixties TV likely remember from a more iconic role she played four years later on Star Trek: The Original Series.

That Captain Kirk is a ladies man is not exactly a little-known fact in Star Trek lore. There is an entire illustrated book cataloging his love interests and countless lists on the internet that attempt to rank his romantic conquests.

But by the third season of Star Trek, at least one of the writers was bored with talking about Kirk's love life. Shari Lewis — who went on to famously create the beloved children's puppet show Lamb Chop's Play Along — pushed for the show to center an episode on Chief Engineer Scotty falling in love. Yes, Shari Lewis wrote an episode of Star Trek with her husband.

For the episode "The Lights of Zetar," Shutan plays Scotty's first love interest, a character named Lieutenant Mira Romaine who arrives on the Enterprise for her very first deep-space assignment. Unfortunately, her mind quickly falls under the control of aliens who give her scary premonitions, including foreseeing Scotty's death.

It was an intense episode, and it proved we cared just as much about Scotty finding love as Kirk meeting his next girl. Lewis' instincts were right! It was the only episode she co-wrote for the show, but it marked an important shift in the Star Trek universe, giving Kirk a minute to cool his jets while others seek out new flames in the far corners of deep space.

In fact, Lewis was hoping to not only write the episode but to guest star as Mira. Unfortunately for her, a different casting decision was made. Among the heartthrobs who stepped aboard the Enterprise, Jan Shutan still sticks out because the love story she featured in was so compelling.

The episode casts Scott in a hero role, as he helps Mira recover from the alien beings intruding in her mind and controlling her body — now that's a real intrusion we know that Helen Crump never had to deal with in Mayberry!

Did you know?1960sDon Knotts
This is the nearly superhuman singer who secretly sang while Barney Fife lip-synched
Are you sure you want to delete this comment?
Close

Sooner 19 months ago
That was one absolutely gorgeous woman. I'd a dropped Helen like a rock.
Like (2) Reply Delete

F5Twitster 19 months ago
“The Lights of Zetar” is what I call a “for-good-and-faithful-service” episode, wherein the producers utilize a regular character who has previously been little more than a reliable cog in the machinery of exposition gets to come front and center and have something of a life and demonstrate some genuine feeling.

Of course, the real reason producers do this is less to reward one of their actors (though that’s something they do like to do), but because any series needs a variety of situations to avoid becoming stale, with every episode little more than a minor variation on all the episodes that preceded it.

In this, Jimmy Dothan was long overdue. The show did this for him only one other time, in “A Wolf in the Fold,” when Scotty is accused of murdering a dancing girl and the real culprit turns out to be the life-Force of Jack the Ripper.

“Star Trek” didn’t do this often; Chekhov was given a bit of a dramatic promotion in “The Way to Eden,” and Nurse Chapel” in “What are Little Girls Made Of?”, but that’s about it, and Scotty’s two “FGAFS” episodes allowed him a lot more opportunity than Walter Koenig or Majel Barrett got.
Like Reply Delete

JHP 19 months ago
and more thing (columbo:)) She really looks like Lynda Carter in the one star trek shot
Like Reply Delete

LieutenantKelowitz 19 months ago
I agree with "Pacificsun" that Jan Shutan's appearance on the Star Trek episode, "The Lights of Zetar" was a bad episode, and a major part of the reason was the forced "love story" aspect between her character and Lt. Scott/James Doohan. It was cringe-worthy watching Shutan and Doohan show "affection" for each other because it was fake and it looked fake. Next time you watch the episode watch Shutan's eyes during the "love scenes" with Doohan. All you can see is her thinking, "Oh, god, I wish this were Captain Kirk instead!"

LieutenantKelowitz LieutenantKelowitz 19 months ago
The best love scene ever played on Star Trek (in my opinion) was between Captain Kirk and the star of this former TV series, that ran from 1960 to 1963. That actress was Shirley Bonne, who played "Ruth" in the Star Trek episode, "Shore Leave". The photo is from the time when she starred in, "My Sister Eileen": 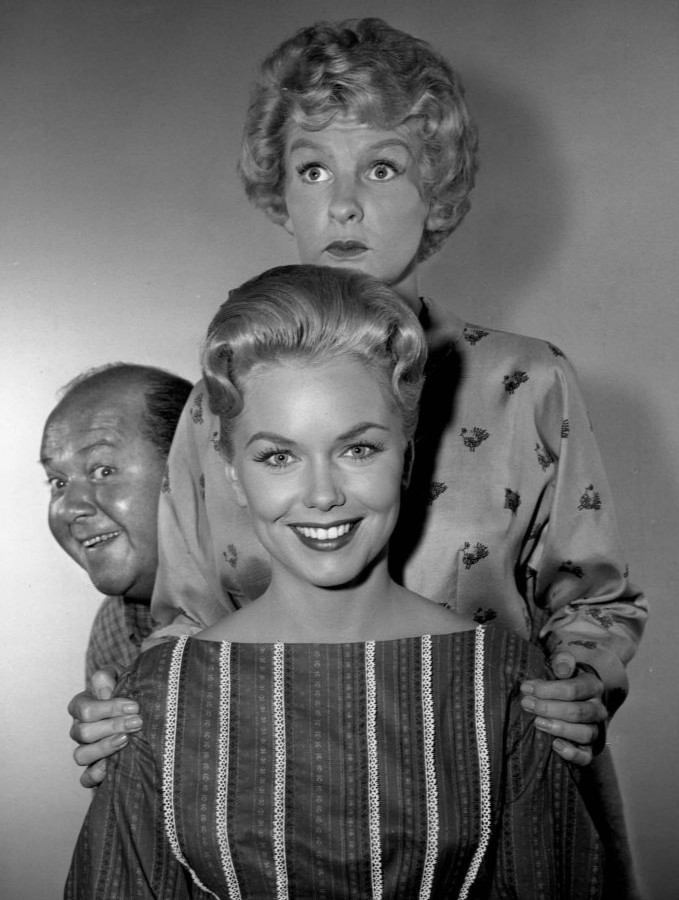 gracie200 LieutenantKelowitz 19 months ago
Shore Leave has always been one of my fave eps. The only thing about Ruth is that she just didn't seem Capt. Kirk's type. She was def beautiful, but she seemed so much more classy than the other little minxes that Kirk hooked up with.
Like (1) Reply Delete

LieutenantKelowitz gracie200 19 months ago
A valid point, but keep in mind that Kirk knew Ruth before he left Earth for the far reaches of interstellar space, just as a US sailor in today's era might well leave a cherished stateside love for faraway exotic ports and faraway exotic women. Also, the women Kirk met in the far reaches of space were chance encounters, whereas Ruth (as the Shore Leave scenes imply) was a long-established, well-developed love between the two, which time and circumstance took away. Without a doubt, Kirk and Ruth were of the same socio-economic class, but in the dangerous reaches of hostile space, this aspect of Kirk was not always evident. Also, as some people do not know, a naval captain (as Kirk was) is not the equivalent of an army or air force captain - but holds the equivalent rank of Colonel in those two other services. So Kirk was of high-rank already, even before he reached Admiral. Ruth was both his greatest love, and the one he lost. And the Shore Leave scenes were meant to illustrate that.

gracie200 LieutenantKelowitz 19 months ago
makes a lot of sense and very nicely put. thanks.
Like (1) Reply Delete

RodBurley 19 months ago
Probably one of the weakest episodes of the Star Trek series, but she was definitely decent in the role she played, despite the material.
Definitely attempted to provide James Doohan a chance to shine for a change, since the series typically focused on the three main leads.
Jan Shutan is turning 88 this year, so she would have been 37 when she appeared in this episode. Overall, would have liked to have seen more of her character, unfortunate that the series was near the end of its run.
Like Reply Delete

sandman 19 months ago
I watched that episode and all I had to say is Hubba Hubba Scotty! Do they still use “Hubba Hubba” in the future?
Like Reply Delete

Gary sandman 19 months ago
I'm from the past and still use it so....yeah😊
Like (4) Reply Delete

Pacificsun 19 months ago
I used to go through syndicated ST runs, enjoying better episodes and skipping the less appealing. Zetar was one of those. Have since learned to watch all of them. But checked my reaction with IMBd reviews. Wasn't far off. Zetar storyline just seems awkward. Love story maybe, but aliens too, a typical forced Sci Fi trope, with no rationale behind it. The actors' chemistry was poor. Forced emotions. Scotty, too over-the-top, and luke-warm Shultan, not believable in her feigned interest. Maybe the age thing. But sure couldn't imagine Ms. Lewis in that role either. (Whereas Eleanor Donahue was perfect as Glenn Corbett's love interest). Also, many continuity errors in Zetar, almost like they didn't care about the episode anyway.
Like (2) Reply Delete

gracie200 Pacificsun 19 months ago
I wasn't fond of this ep either. Mostly because i did not like Lt. Romaine's attitude. She was rude and uncooperative the way she snapped at McCoy for doing his job; yelled at him because he wanted answers and then yelled because she wanted answers too. didn't make any sense, and you just don't speak to a superior officer that way. Scotty was too sweet for the likes of this woman. K, stepping down off my soap box now, lol.
Like (3) Reply Delete

Ehsauve gracie200 18 months ago
I totally agree. I dislike that episode because of her character
Like Reply Delete