Where To Watch Shop Store Contact
Home / Stories / How a former sitcom star made his directorial debut on The Andy Griffith Show's ''Christmas Story''
Did you know?MayberryAndy GriffithA Very Merry MeTVHoliday TV

The former Fibber McGee became Andy Griffith's ace thanks to a ''hunch.'' 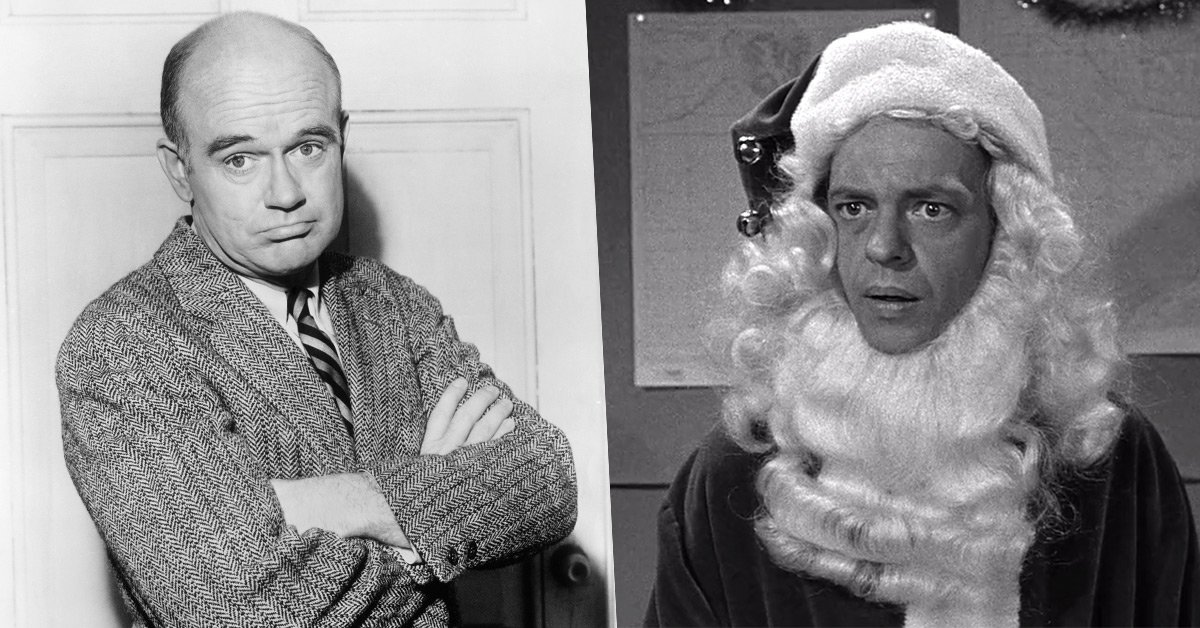 Bob Sweeney had big shoes to fill. Fibber McGee and Molly had been delighting American audiences for decades. The radio program premiered in 1935, with Vaudeville veterans and married couple Jim and Marian Jordan portraying the title characters. The scheming Fibber McGee and patient wife Molly set the mold for the husband-wife sitcom.

Sweeney himself had been part of a hit comedy team on the radio, partnering with Hal March on The Sweeney and March Show. His television breakthrough came with a starring role on My Favorite Husband, another adaptation of a popular radio program — one that had starred Lucille Ball and essentially evolved into I Love Lucy. Anyway, Sweeney turned up on The Rifleman and Our Miss Brooks before taking the unenviable role of Fibber McGee.

Longtime Fibber fans did not take to the replacements. Imagine an I Love Lucy reboot with anyone other than Lucille Ball and Desi Arnaz to understand what it must have felt like for Fibber-fanatics.

NBC canceled Fibber McGee and Molly after a single season. Sweeney then shifted to a new role behind the camera.

Sweeney was friends with Sheldon Leonard, who in 1960 was creating a new sitcom called The Andy Griffith Show. Leonard hired his actor pal as a director "on a hunch," according to Daniel de Visé's 2016 book Andy and Don: The Making of a Friendship and a Classic American TV Show.

"He had never directed before," his daughter Bridget explained to de Visé. "He read every book he could get on the subject."

To make things more daunting, the first episode "Sween" (as friends and colleagues called him) was asked to direct was "Christmas Story," the heartwarming holiday story in season one. Don Weis had directed nine of the first ten episodes. Leonard and the producers then looked for a director who had chemistry with Andy Griffith and Don Knotts.

When he first walked onto the soundstage, Sweeney announced himself, "Sweeney's the name, comedy's the game!" It broke the ice. But his confidence perhaps took a hit when he began to film. Instead of saying, "Action," Sweeney yelled "Cut!"

Sweeney ironed out the kinks quick enough. "Christmas Story" was perfection, a classic holiday movie condensed into 26 minutes. Picture the moment when the camera slowly pans up the wall of the jail cell to reveal old man Weaver singing along to "Away in a Manger," his hands wrapped around the bars as he tries to steal a glimpse of the warmth inside. What a lovely shot.

No wonder that Sweeney went on to direct the next 80 episodes of The Andy Griffith Show, up through "The Big House," the final episode of season three.

The onetime sitcom star became an in-demand sitcom director. Sweeney helmed numerous episodes of That Girl, Hogan's Heroes and The Doris Day Show. Despite his formidable comedic skills, Sweeney never appeared as a guest star on these series. He was comfortable behind the camera. And all thanks to Sheldon Leonard's "hunch."

Runeshaper 2 months ago
Great story! It's cool that Sween was able to direct such an iconic episode (-:
Like Reply Delete

justjeff 2 months ago
Overall, a good article... but the reason why Jim and Marian Jordan didn't reprise the Fibber McGee and molly characters was in part due to Marian Jordan's health issues (she was a recovering alcoholic and died of ovarian cancer in 1961) and also the Jordans didn't feel the characters would translate well to a TV sitcom (although he and Marian did play their roles in a number of films such as "Heavenly Days") and on friends urgings stuck with radio...

From Wikipedia: "They were trying to push us into TV, and we were reluctant," Jim Jordan told an interviewer many years later. "Our friends advised us, 'Don't do it until you need to. You have this value in radio--milk it dry.'"
Like (1) Reply Delete

ELEANOR 2 months ago
Some actors, when on the set, they just act. Other actors such as Bob Sweeny, not only acted but aimed for a spot on the other side of the camera and took notes on what happens on the other side of the camera. Apparently, Bob took good notes. Also we may not be remiss to note that little Ronny Howard also took good notes and eventually got to sit in a chair marked Director and then Producer.
Like (1) Reply Delete

JosephScarbrough 2 months ago
Ah yes, reading books, that was how you Googled back in those days. As a matter of fact, when NBC picked up H.R. PUFNSTUF, Sid & Marty Krofft had absolutely no idea how to produce a TV show, and had sent their personal assistant to the book store to buy a book on that very subject. Then, when PUFNSTUF got picked up for a movie, they sent their assistant to the book store for a book on how to produce a movie.
Like (1) Reply Delete

LoveMETV22 JosephScarbrough 2 months ago
That's odd as they produced "The Banana Splits", prior to H.R. Pufnstuf. Did they use a book for that as well ?
Like Reply Delete

MarkSpeck 2 months ago
And Sweeney was replaced as the main director of TAGS by another actor-turned-director, Lee Philips.
Like Reply Delete

LoveMETV22 2 months ago
So if Barney can be Santa so should Bob Sweeney. 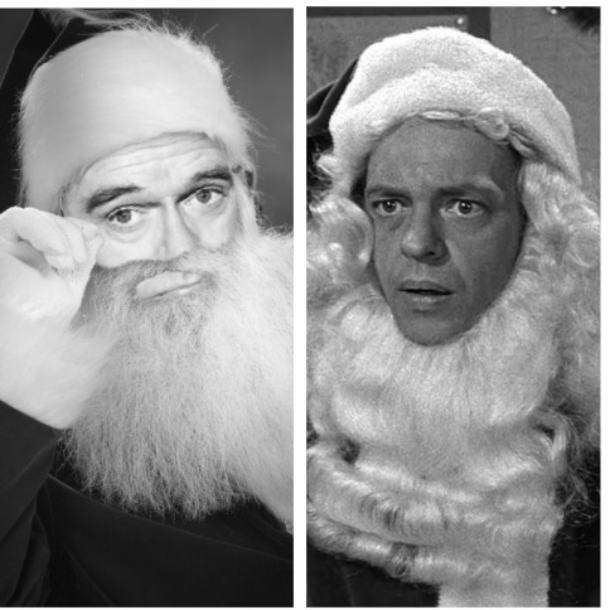 Mike 37 months ago
No one believes this but it's true:
Post TAGS, Bob Sweeney also directed many dramatic episodes on TV.
From there he moved up to the producer's chair.
For much of its run, Bob Sweeney was Producer of HAWAII FIVE-0 (what would nowadays be called the showrunner).
If MeTV ever starts running FIVE-0 again, check the credits.
Like Reply Delete

MarkSpeck Mike 2 months ago
He had the longest run of any of the Supervising Producers on the series...Sweeney lasted for four season (1971-75). Amazing considering that, most other seasons, Five-O changed producers like most people change clothes!

After he left Five-O, Sweeney and the producer who worked under him, Bill Finnegan, later formed Sweeney/Finnegan Productions. They would return to Hawaii in 1977 to produce the short-lived NBC series Big Hawaii.
Like Reply Delete

MarkSpeck Mike 2 months ago
And some years later, Sweeney, who went back to work as a director, reunited with Andy Griffith for a few episodes of Matlock.
Like Reply Delete

cperrynaples 38 months ago
Sweeney's turn as Fibber Mcgee was a disaster because it ""tain't funny" as Molly would say on the radio! Believe it or not, he was also Gale Gordon's sibling on "The Brothers" in 1956!
Like (1) Reply Delete

RedSamRackham cperrynaples 38 months ago
I liked The Box Brothers which sadly was cancelled too soon. Bob Sweeney also good as a travelling sales guy on a few Rifleman episodes. He took a serious dramatic turn as a not very nice circus employee in Disney movie TOBY TYLER. A great comedic & dramatic character actor indeed. ☺
Like Reply Delete

justjeff cperrynaples 2 months ago
What was also missing from the TV show was Bill Thompson as either Wallace Wimple or The Old Timer... Harold Peary as Gildersleeve (instead he was cast as Mayor LaTrivia instead of Gale Gordon)...
Like Reply Delete