The Greg Brady actor talks to us about the Brady Bunch, cruises, surfing and tiki curses. 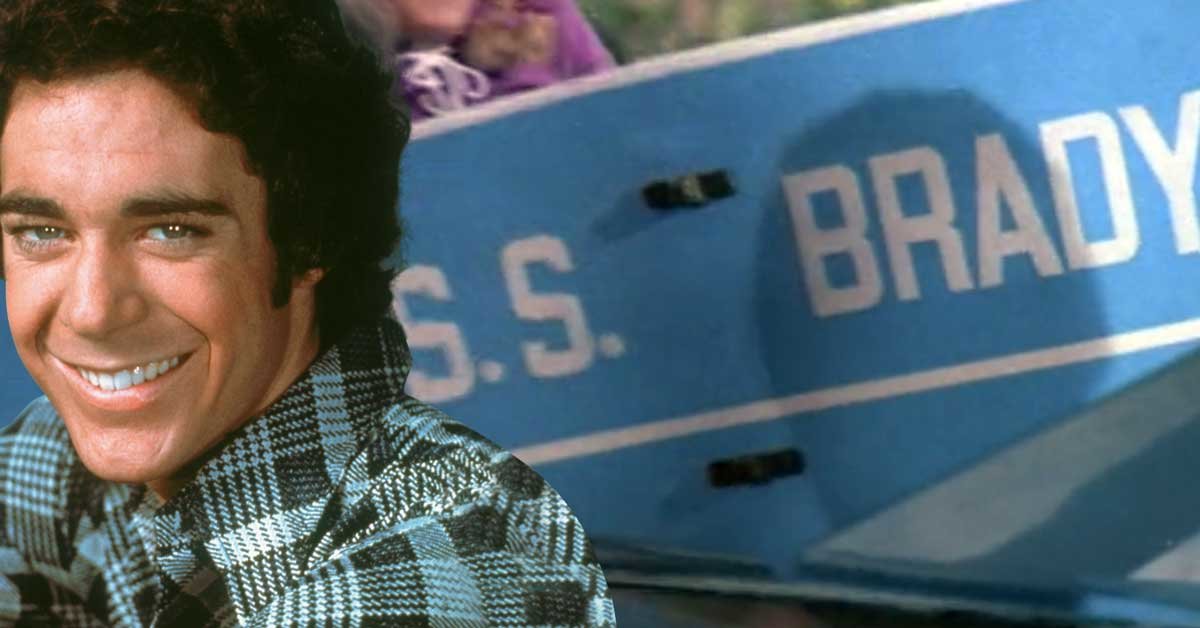 The Brady Bunch was famous for its fun family vacations. They hit the beaches of Hawaii, went camping in the Grand Canyon, and rode roller coasters in Ohio. Perhaps it's no wonder then that Barry Williams, a.k.a. elder brother Greg Brady himself, is helping to pioneer a new form of the family vacation — cruising the Caribbean with your favorite television stars.

Setting sail next year, November 8–14, 2019, the Classic TV Stars Cruise brings nostalgia to the tropics. Williams will host the cruise and bring along a dozen fellow classic TV stars. Also onboard are Greg Evigan (B.J. and the Bear, My Two Dads), Kathy Garver (Family Affair), Jerry Mathers (Leave It to Beaver), Judy Norton (The Waltons), Butch Patrick (The Munsters) and Jimmie Walker (Good Times), with four more celebs to be named soon. 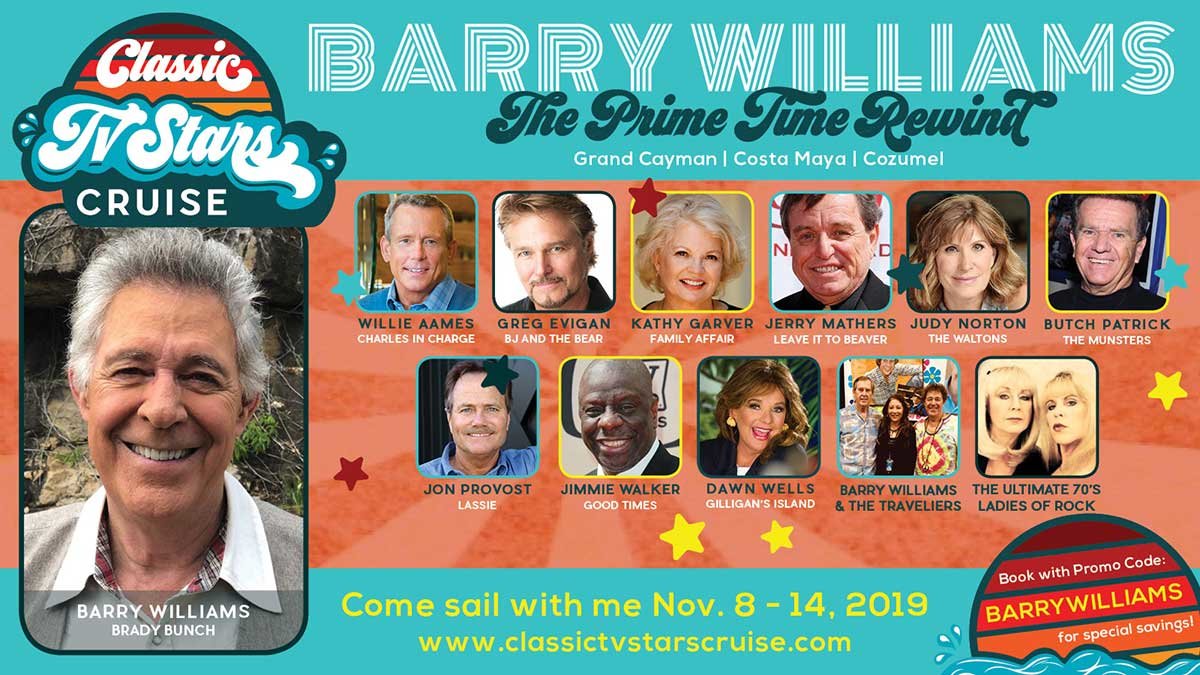 Leaving from Fort Lauderdale, Florida, the Celebrity Cruises ship Silhouette will voyage to Georgetown, Grand Cayman, and both Puerto Costa Maya and Cozumel in Mexico. Along the way, you can meet and mingle with the actors, take in some variety shows, laugh at comedy shows, and even participate in talent shows that recreate scenes from the classic shows. Of course, there will also be all the other luxury amenities, food and drink that come along with a cruise. (See below for more details.)

Lately, Williams has been busy as an official ambassador for MeTV. We called him up at his home on Table Rock Lake in Missouri to talk about The Brady Bunch, cruises, surfing and that old tiki curse.

Let’s talk about the cruise. The celebrity cruise concept has been done many times with musical acts, but sailing with TV stars is something new.

You’re perhaps familiar with StarVista. They do a '50s Malt Shop Show, a '60s Flower Power cruise, a '70s Rock and Romance cruise, there is the Southern Rock cruise, the Soul cruise. They have seven or eight of these things that have been very, very successful with several of the same elements we’re bringing to the Classic TV Stars cruise. But, interestingly, this has not been done before. This is our inaugural cruise, and it’s been a real joy putting it all together because I’m reconnecting with a lot of my old friends of the day.

With those music cruises, the bands set up on the deck and play. You, Greg Evigan and John Schneider all have musical backgrounds, but what will be the entertainment?

A good question! Putting together the activities has been a joy, because we asked, "Okay, what would be the most fun thing to do? What would people want to do the most? What would be available to us?" You know, we have this great floating city. The ship holds 2,800 passengers, although we will only be selling just over a third of the ship. There will be exclusivity with those who join the TV Stars portion of it. As far as music, I start with myself. Barry Williams and the Traveliers will be the host band. We’ll set up at the poolside. Everyone on the ship will be welcome to see it. We’ll have an exclusive area close up for our crew. We’ll be reminding them of all the cool things coming up and who’s here and when you’ll get to meet them. 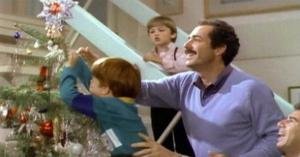 What will everyone else do?

We anticipate that the Traveliers will also be the host band for the variety show. The variety show will include all 12 celebrities in some capacity. So, it depends on their individual talents — if they want to do magic, if they want to do comedy, if they want to straight-out sing, or even read something, or recreate a scene from one of their shows. I’ll have Jimmie Walker there and he’ll help me introduce the next act. The Traveliers will do theme songs or songs of the day. John [Schneider] is planning a separate concert. It’ll be all John in the main showroom. Then we have the Ultimate '70s Ladies of Rock. They are two gals who rock. They do tributes — Christine McVie and Stevie Nicks [of Fleetwood Mac] are their wheelhouse, but they do Heart, Linda Ronstadt. They are interactive and will include the audience to sing along or sing with them. They are a great little powerhouse duo.

I have a question about your television career related to cruises. Why were you never on The Love Boat? Everyone was on The Love Boat, including your Brady costars Maureen McCormick, Christopher Knight, Eve Plumb, Florence Henderson, Robert Reed. Is there a story there?

Well, this gives you a chance to live out your Love Boat fantasies.

In a big way. That same person, by the way, must be working over at Dancing with the Stars.

Have you tried to get on that?

Since the second season!

Maybe we can start a campaign.

We have the power of the fans. And now that John’s on this season, you have a connection there.

And I have a little bit of a connection with Florence Henderson, too, and Maureen McCormick after that.

I have another question that relates to your television persona and how it relates to cruising: Do you still surf?

Behind the boat. I wakesurf with an 8’ 6” foamboard and then I have a board which is five feet, four-and-a-half feet, something like that. And then I have the one with the boots, a wakeboard. The difference is small, except you can carve a little better. The surfboard is made for truly riding the wake. That’s how I get my surfing in.

Before The Brady Bunch filmed its Hawaiian episodes, you finagled a weeklong surfing trip to Hawaii for you and your brothers to "train and scout."

[Laughs.] Yeah, yeah, I was only going to save them money. I know that production time is expensive, and I want to make sure I get each wave, which required about a week or so rehearsal.

Does that trip still stick out in your memory?

Oh, it was awesome. We had a great time. The surfing was even better when the [production] company got there, because, before that, we were grabbing a pipe with all the other surfers out there, grabbing a wave. But once the crew showed up, we had rented the entire beach. So, basically, they were all my waves. Which is pretty awesome for a surfer.

I like to say I'm America’s Most Reliable Big Brother. My brothers taught me everything I know.

Did you take the behavior of how your brothers treated you and apply that to your role?

Heck, yes! Although, some of the lessons they gave me were on stronger terms than we could put on TV.

A lot of your real exploits in your memoir [Growing Up Brady: I Was a Teenage Greg] sound like a gritty version of The Brady Bunch.

Ha, exactly. Do you have mementos from The Brady Bunch?

I have the tiki [from the three-part Hawaii vacation episodes at the start of season four]. That will be with me on the cruise.

Aren’t you worried about having that on the boat? Isn’t it cursed?

I won’t leave it laying out. I’ll have it in glass. Plus, once we went into syndication, all that bad mojo was lost. It’s all good now.

Were you given that prop?

Ah, yeah, I kind of just… you know… it was in my pocket. Or, maybe, I was just wearing it and forgot to take it off.

Want to cruise the seas with Barry Williams and friends? Learn more at classictvstarscruise.com or by calling 855-879-6932.

NostalgiaTriviaGame Shows
Can you guess which game shows Florence Henderson was on? 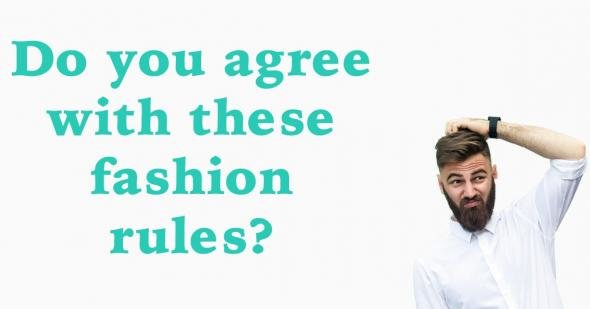 PollStyleNostalgia
Do you agree with these fashion rules?
Are you sure you want to delete this comment?
Close 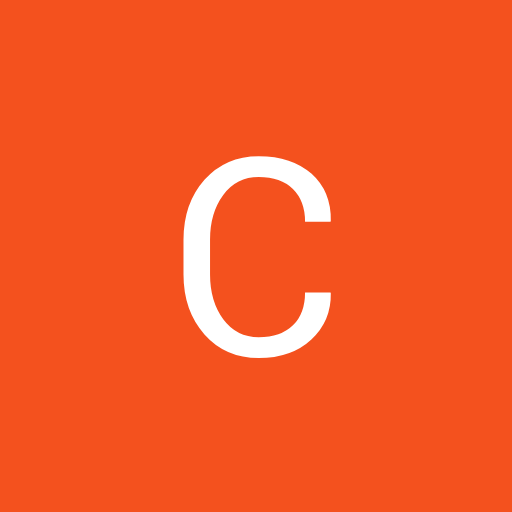 Connie 43 months ago
It would seem that for whatever reason, the cruise has been postponed cancelled...?