Over the last century, Dr. Pepper has used everything from Dick Clark and comic strips to Popeye and cowboy hats to sell its soda. 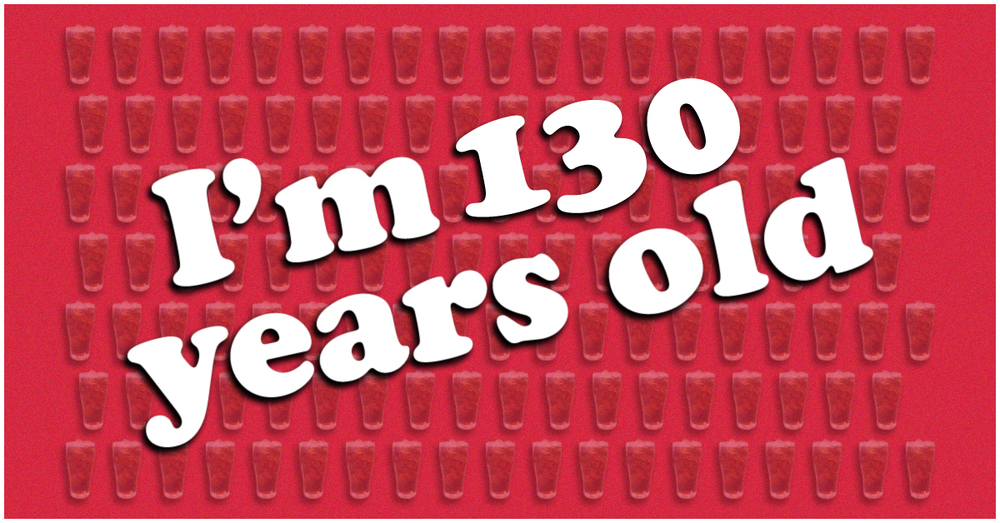 On December 1, 1885, a pharmacist in Waco, Texas, served the first Dr. Pepper. That makes the soda a year older than Coca Cola. Over the last century plus, the soft drink has become a part of the pop culture fabric with its slogans and jingles. It certainly has its place in TV history. The "I'm a Pepper" commercials launched the career of actor David Naughton, who sang and danced his way from the ads to Garry Marshall's disco sitcom Makin' It, a show so determined to duplicate Saturday Night Fever it cast John Travolta's sister. Dr. Pepper also sponsored Dick Clark's American Bandstand.

As the drink is turning 130, let's flip through the pages of the past and look at how the marketing of Dr. Pepper evolved over thirteen decades.

1. Like most soft drinks, it once promoted itself as a health booster. 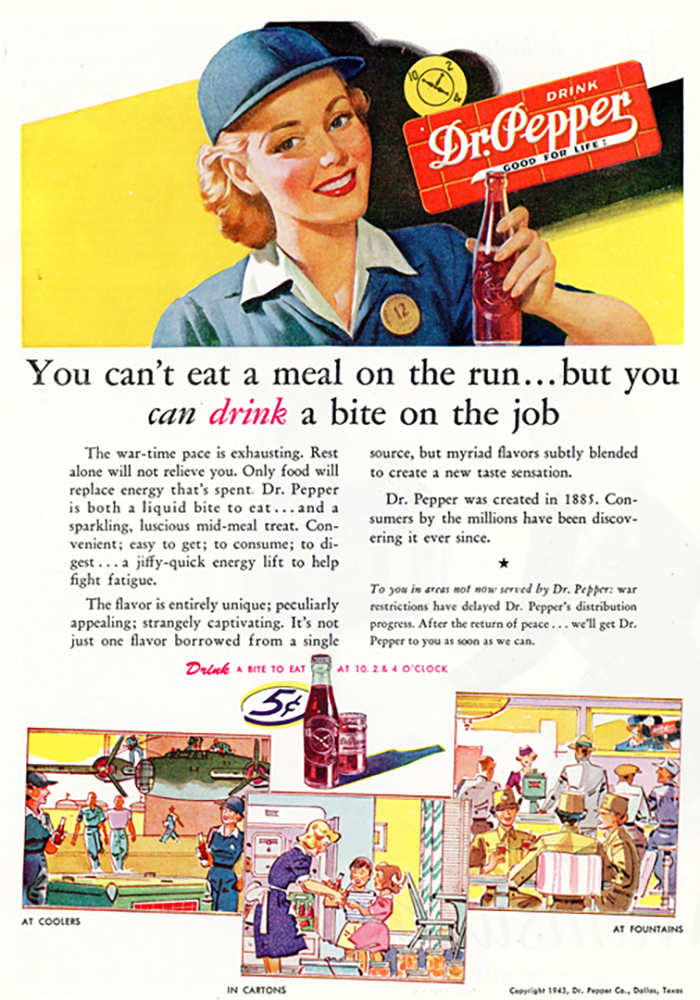 During WWII, Dr. Pepper went the functional route, touting its basic caloric content. "Rest alone will not relieve you," it told those Rosies out there. Note the clock that marks 10, 2 and 4 o'clock, which was worked into the bottle design. That was in response to studies that showed human energy levels dipped around those hours of the day. 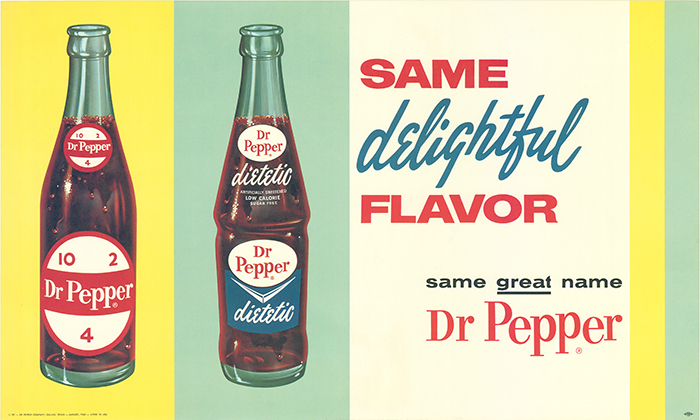 Yes, "dietetic" sounded as unappetizing back then as it does not. The name only lasted a few years. 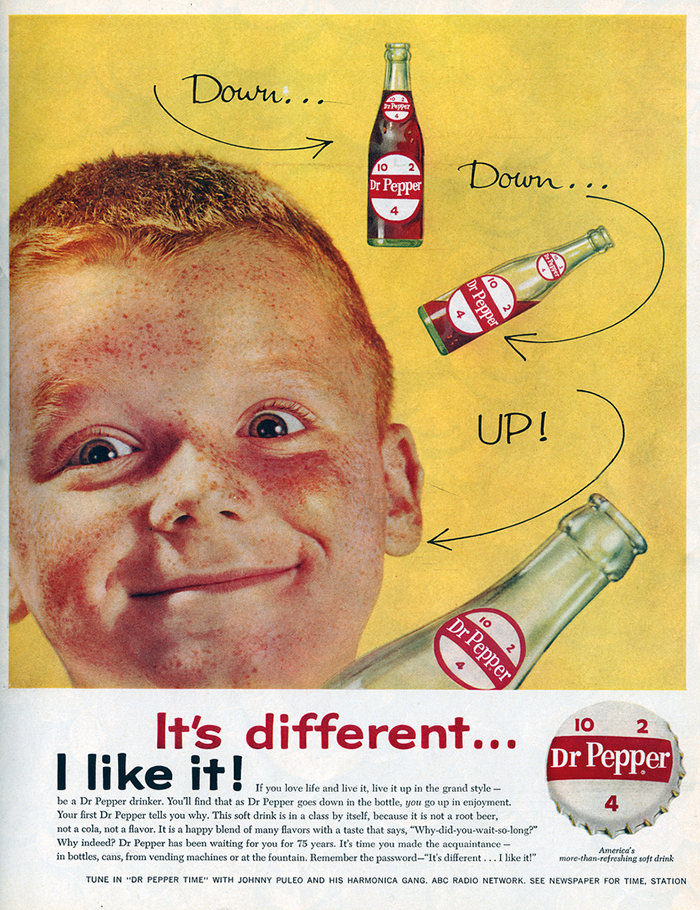 For years, the company stressed that it was "not a root beer, not a cola, not a flavor."

4. Did people really drink it hot? 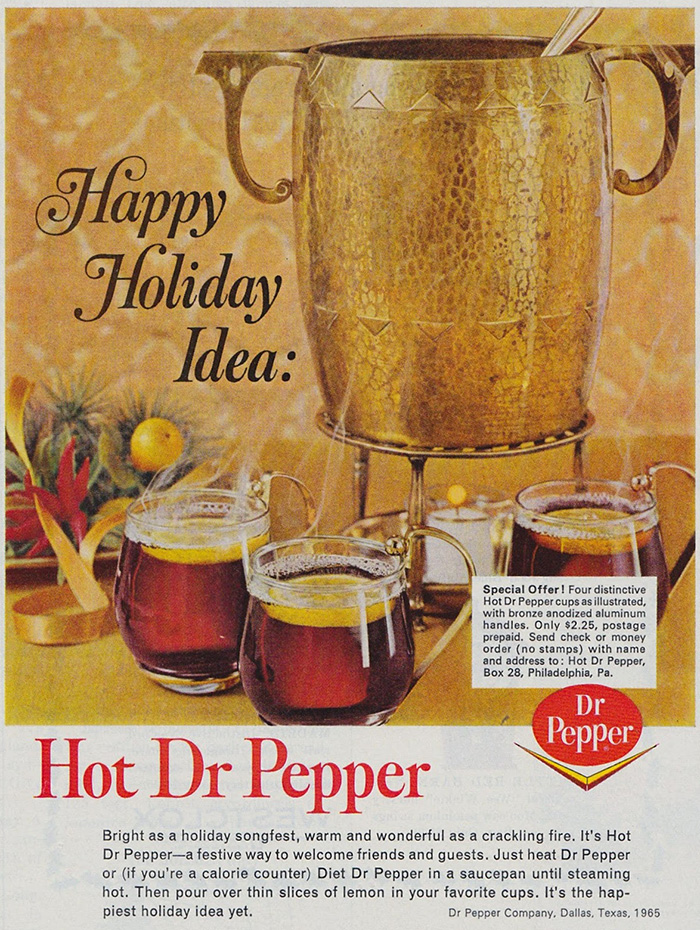 Ads in the mid-1960s offered a unique suggestion for the holiday season. 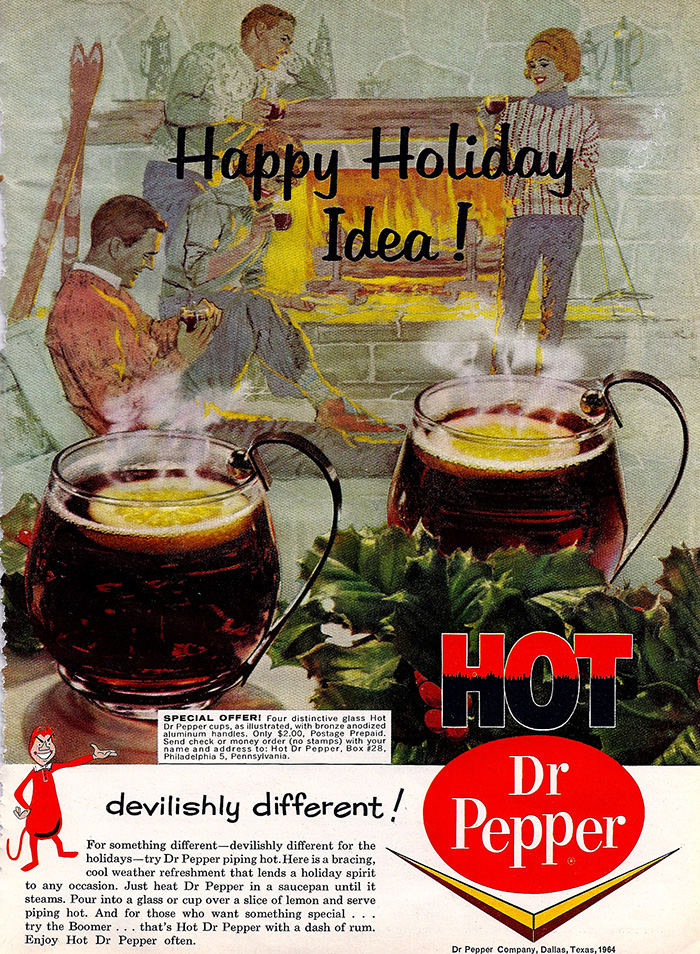 Did anyone have this growing up?

Image source: Hey, My Mom Used To Make That

6. People mailed away for it. 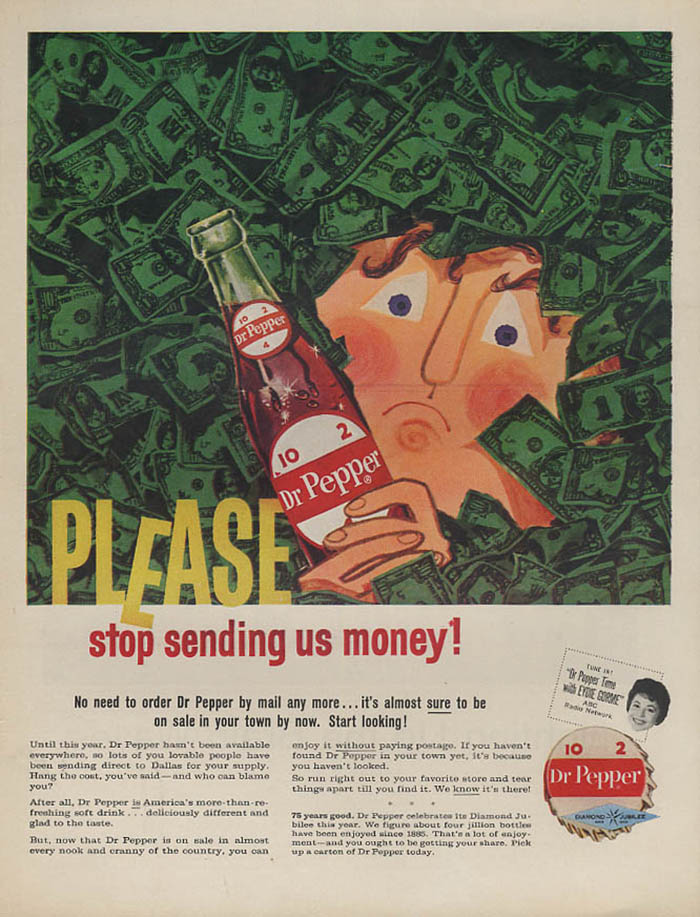 Born in Texas, the drink was a regional treat at first. This ad copy asked people to stop mailing for it direct from headquarters.

7. It touted its secret formula. 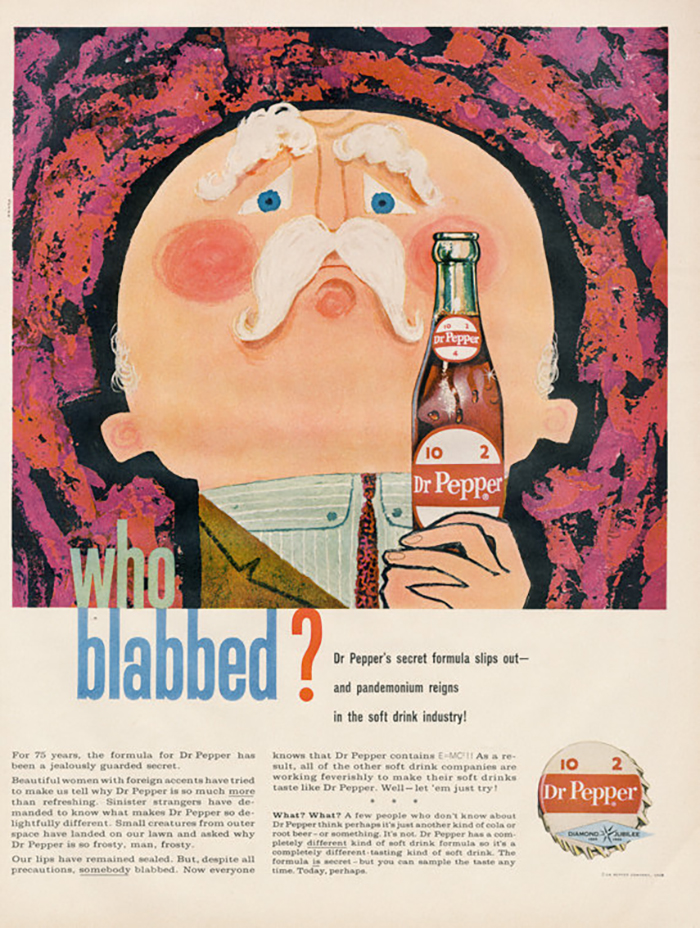 In the 1940s, the slogan sold the drink's "23 flavors." Eventually we found out just what those were — everything from Amaretto to tomato. Yes, cola and root beer are in there, too.

8. It made big promises. 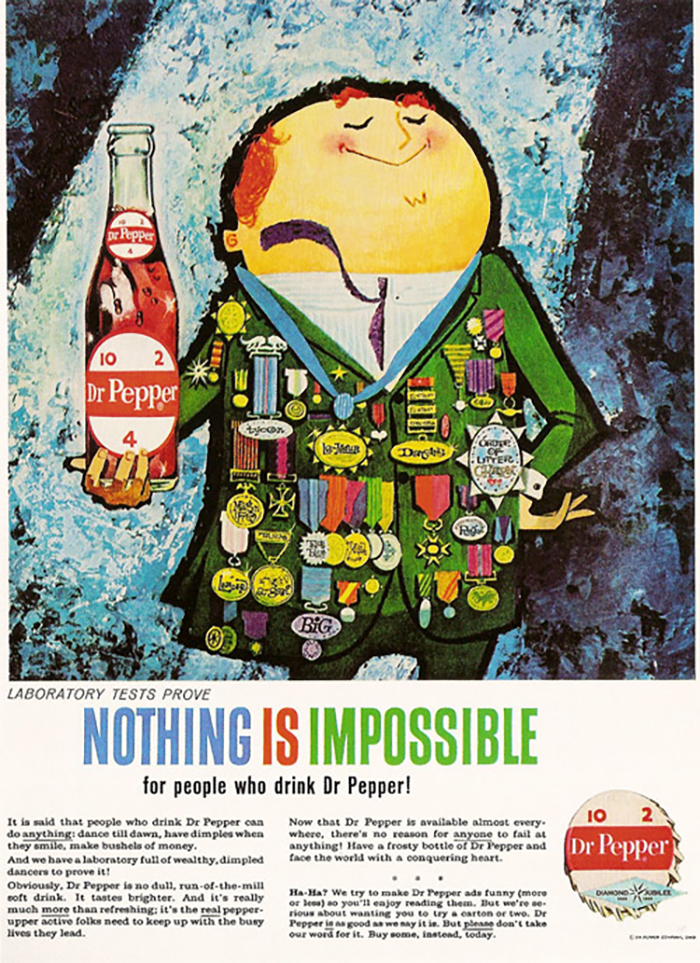 "There's no reason for anyone to fail at anything!" the ad jokes. Joke or not, a company probably could not get away with claims like this today.

9. Sherbet was its popular float-mate. 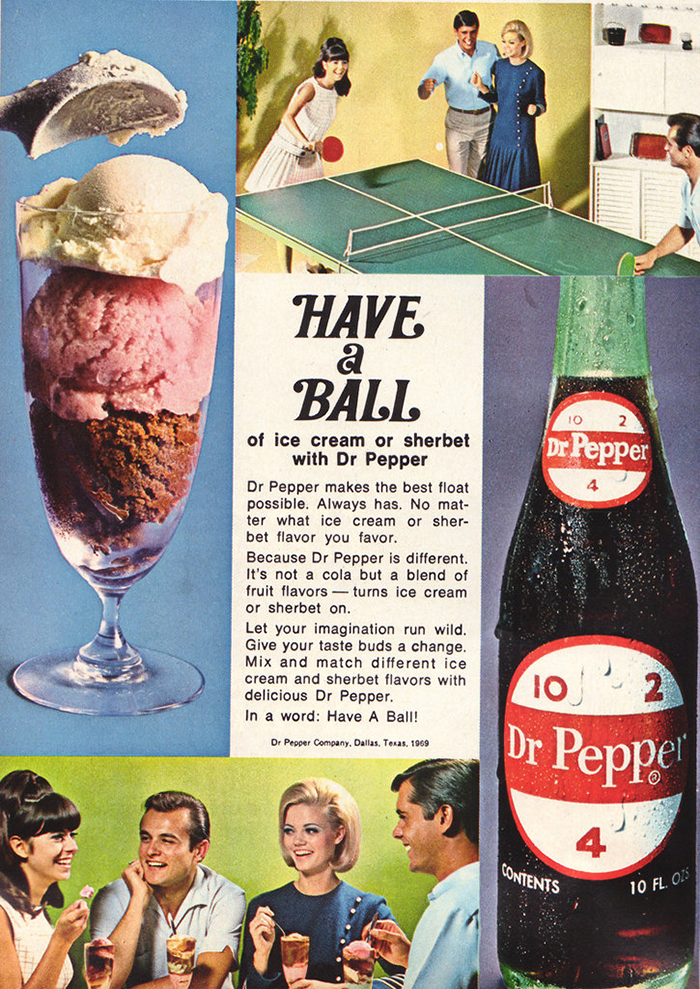 In the era of malt shops, the soda often suggested dropping in a few scoops of sherbet. 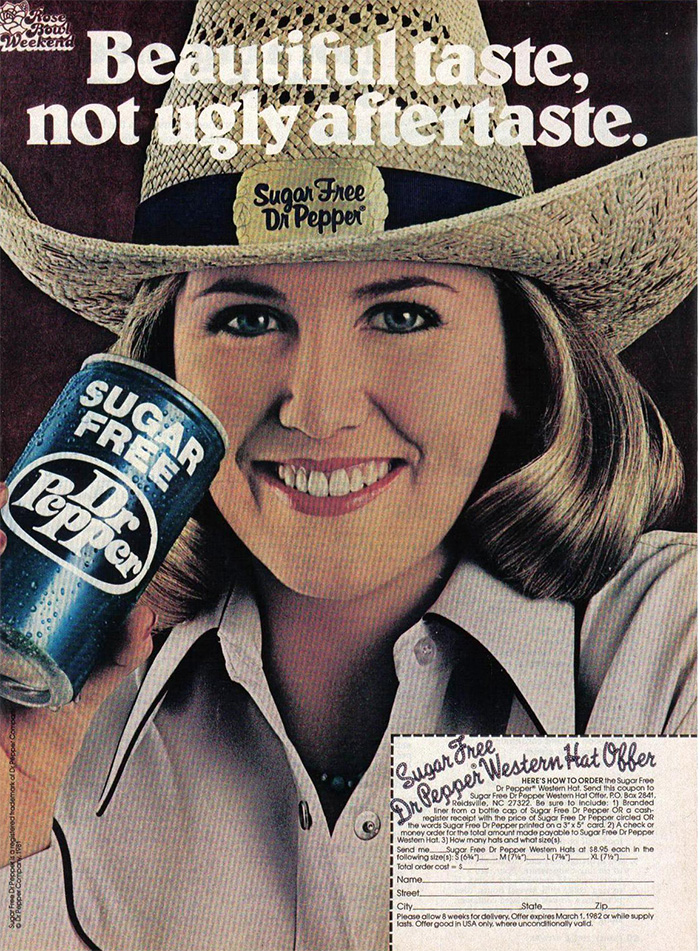 Advertising grew far wiser in the 1960s. In the middle of the decade, "Dietetic" was swapped for the more appealing "Sugar Free." Not too sure about that hat, though.

11. Even Popeye pitched it. 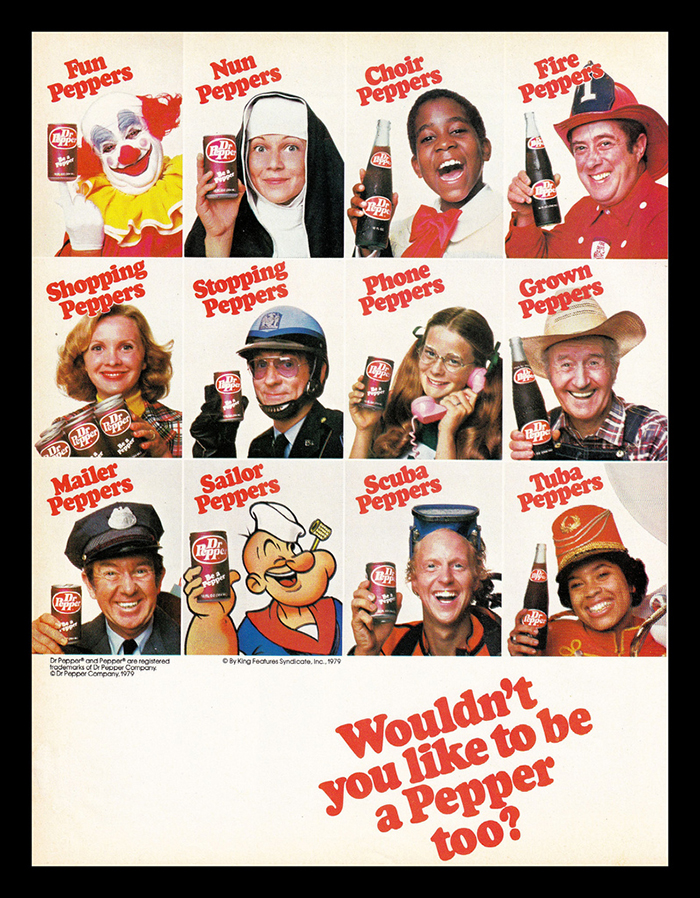 The most familiar campaigns revolved around "I'm a Pepper…" Seemingly everyone was a Pepper, even cartoon characters.

12. It was ahead of the curve with the soccer craze. 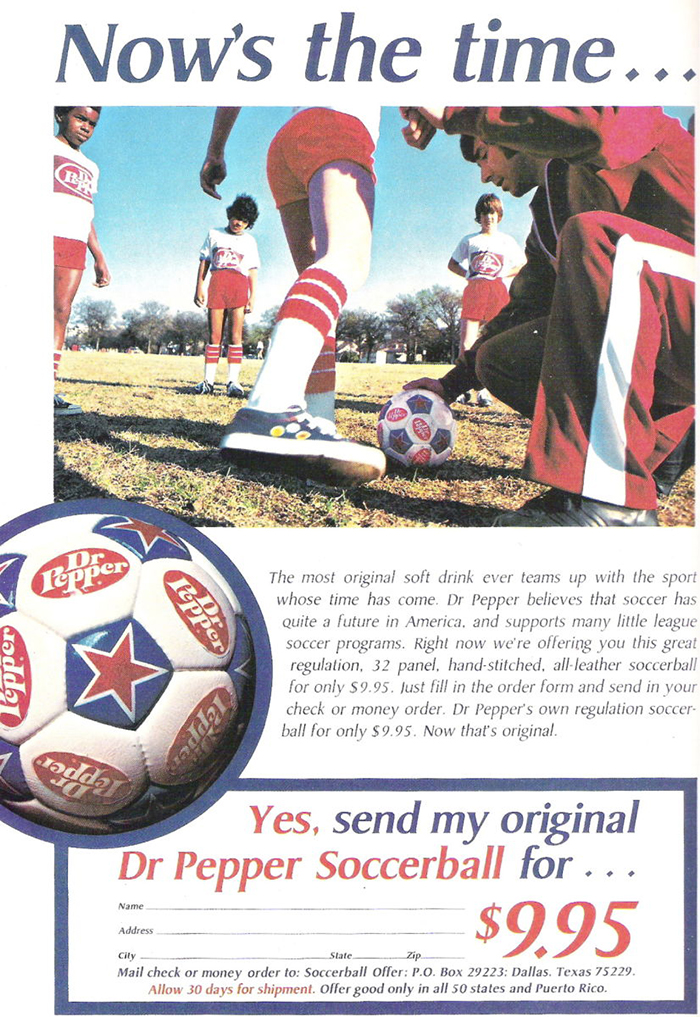 This 1976 ad touts soccer as "the sport whose time has come." Despite the popularity of the NASL at the time, it was perhaps a few decades early. Still, cool ball.

13. It used comic strips and Dick Clark to help sell it. 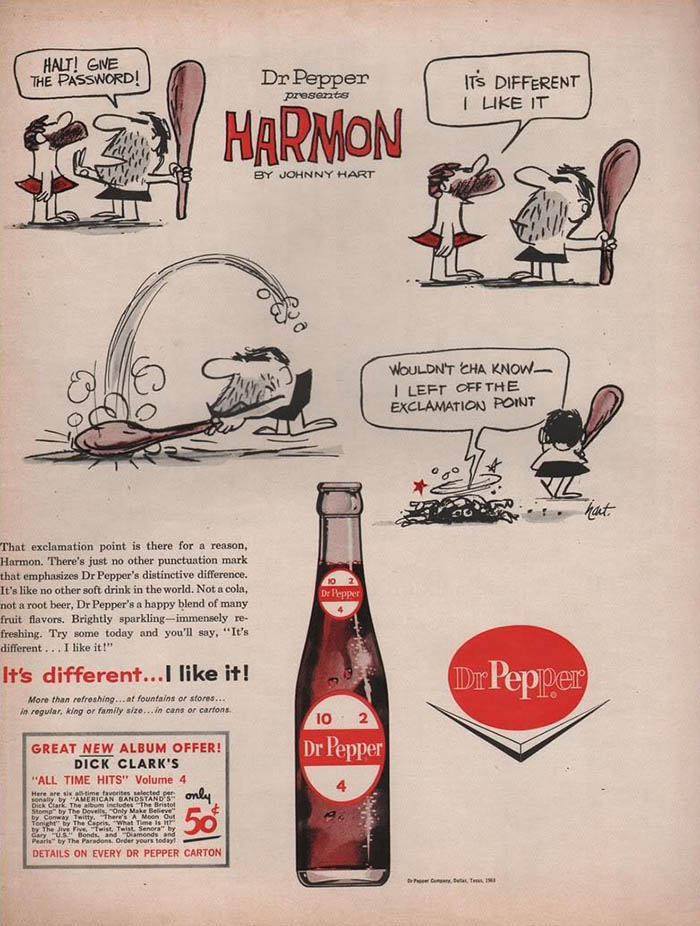 Harmon the Caveman appeared in ads in 1962–63. The strips were drawn by Johnny Hart, the creator of B.C. Also note the offer for the Dick Clarke collection that included tunes by Conway Twitty and The Jive Five.