Where To Watch Shop Store Contact
Home / Stories / These 4 MeTV shows shared the same lot for filming!
did you knowhistory

These 4 MeTV shows shared the same lot for filming!

Have you ever spotted these familiar storefronts? 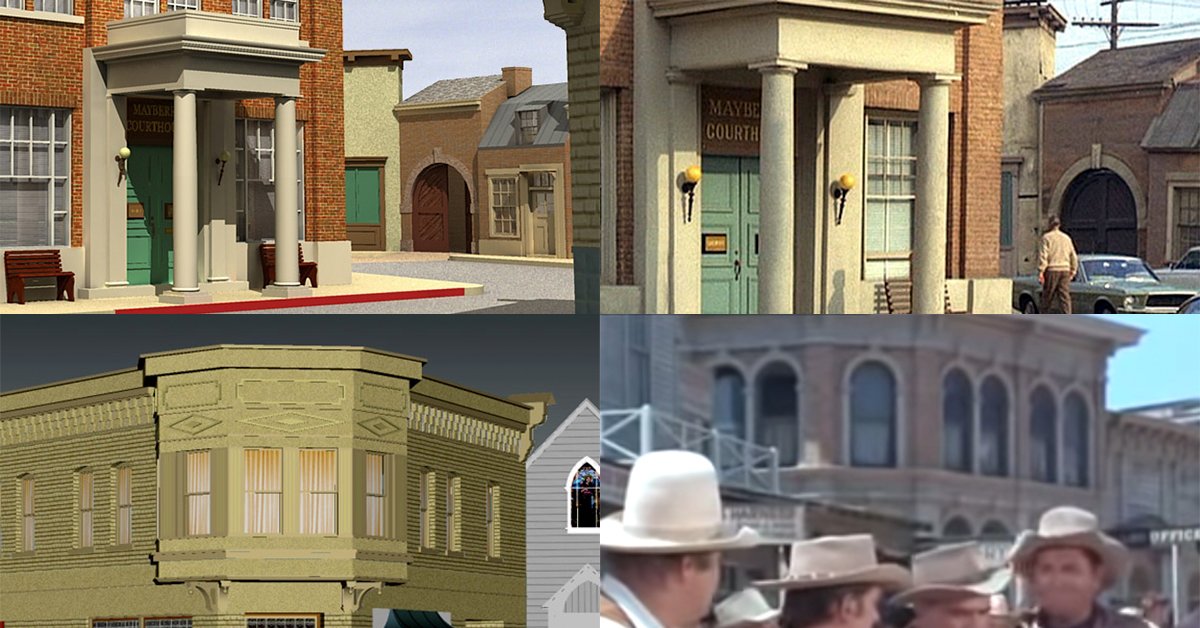 The RKO Forty Acres is a numerically misnomered studio lot that has a rich history of entertainment associated with it. A 29-acre lot just outside of Culver City, California, it was the stage for iconic movie moments like Gone With the Wind (1939) and Citizen Kane (1941). Under a variety of owners, the backlot appeared in dozens of films, and by the early 1950s, the lot began to appear in television productions as well.

A handful of the shows you still watch on MeTV carry on the legacy of this stage, and we've been able to pinpoint them for you! We're sure the first one won't surprise you, but just in case you haven't noticed, here are all 4 of the shows that shared the same filming lot. 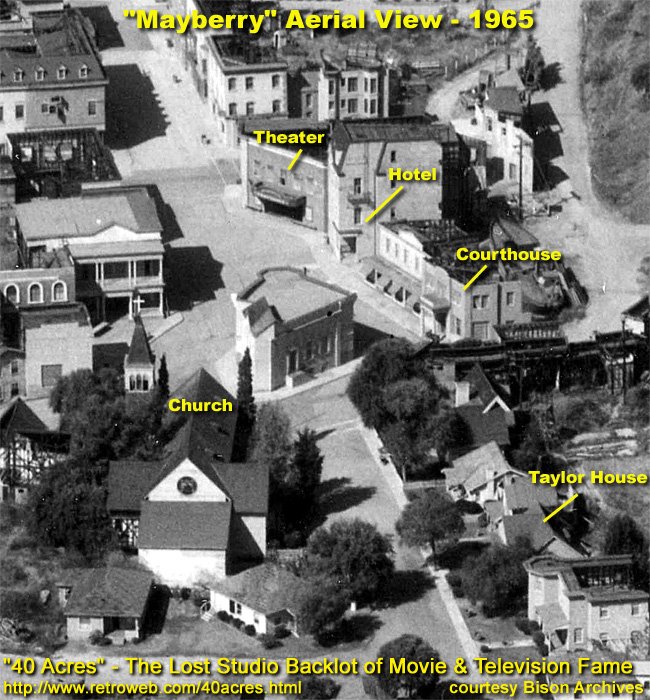 Many longtime fans are aware that the little town of Mayberry is actually a Hollywood set. Heck, you probably know the facades of Mayberry like the back of your hand! The Andy Griffith Show took over the northeast corner of the lot. Fans of the show will immediately recognize the courthouse – those columns outside of Sheriff Taylor's office are hard to miss. You'll also recognize the marquee of the Grand Theater and the steeple of the town church. 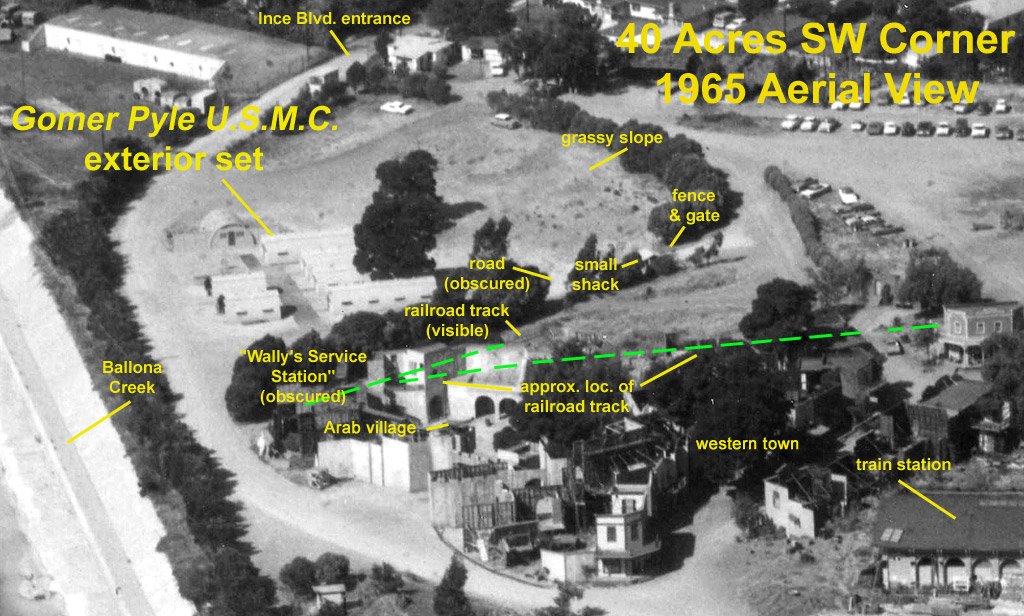 For Gomer Pyle, U.S.M.C., the southwest corner of the lot was modeled to look like the barracks that Pyle and his friends spent the majority of their time in. You will recognize the main thoroughfare, where Pyle would have first lined up and met Sergeant Carter. You can see this in the image, the green line denotes the railroad track that runs nearby. 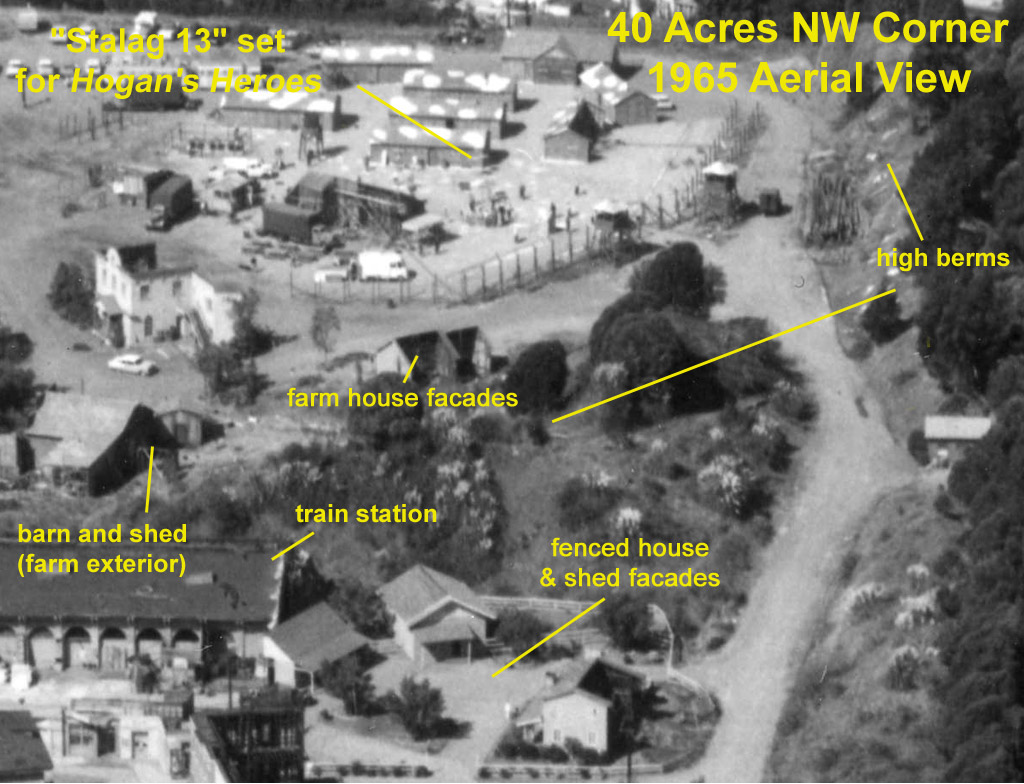 The northwest corner of the lot became devoted to the set of Hogan's Heroes. The POW's needed plenty of spaces to meet and carry out their plans in private, and from the look of this layout, there were plenty of opportunities! If you look carefully, you can even see the water tower that could be spotted in plenty of the wide shots of the show! 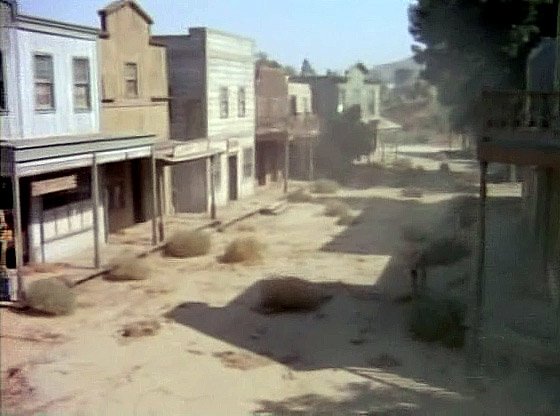 Most of the time, Bonanza was perfectly content with keeping the Cartwrights out on the open plains of the Ponderosa. However, when they did make a pitstop in town, it was on RKO Forty Acres. Often times all that was needed was one shot of the dirt-road midwestern, and BAM! There is your pioneer town miles away from the homefront. If you look closely, you can see the fronts of very familiar buildings in the backdrops. The red brick looks awfully like the hotel turret, doesn't it?

SEE MORE: The 'Hogan's Heroes' set was blown up to make an exploitation film 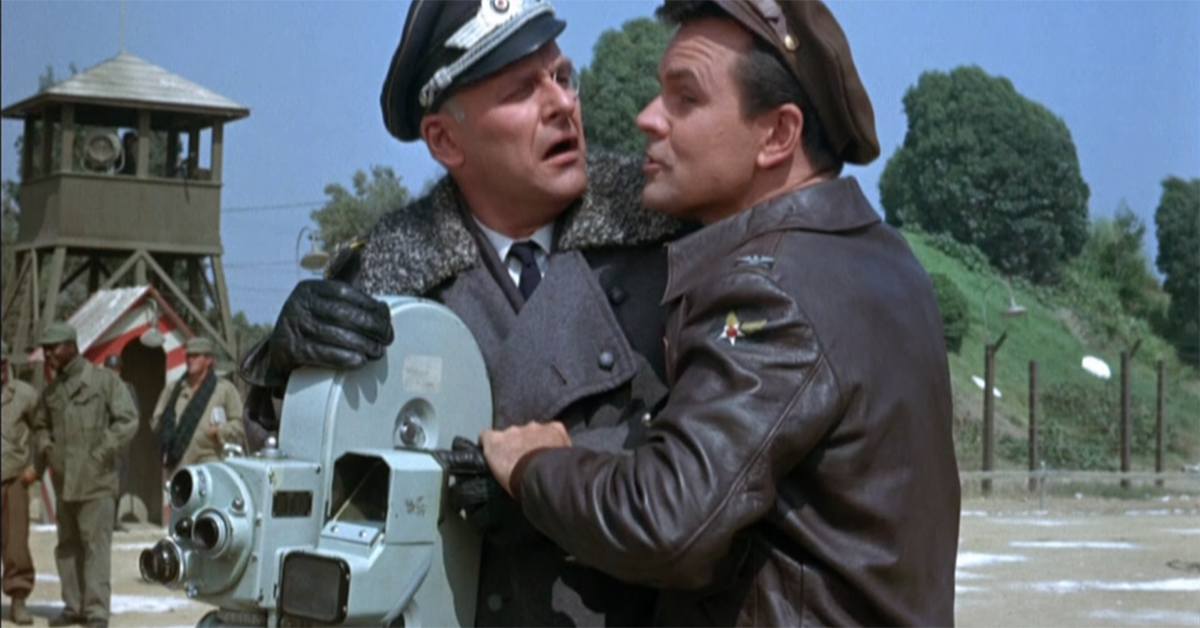 'Ilsa, She Wolf of the SS' led to the demise of Stalag 13. READ MORE

ELEANOR 7 months ago
This is wonderful information, simply wonderful. Are we actually supposed to make out those minuscule yellow captions? NOT!! We are repeatedly encouraged to recognize certain features. HA HA HA!! Yes, but only after printing it and using a strong magnifying glass. Please remember that we, of an age to remember these shows, have older eyes. Next time, larger photos!!!
Like Reply Delete

denny ELEANOR 7 months ago
I view it on my tablet and it let's me enlarge the pictures. To bad it's been torn down and is now a business park.

You can pause the video at 1:29 to see the picture in full screen.
Like Reply Delete

15inchBlackandWhite 34 months ago
Yes I was thinking the same thing. Either they don't proofread or they have NEVER ACTUALLY WATCHED THESE SHOWS. Which is a depressing thought. ;(
Like (1) Reply Delete

Pacificsun 15inchBlackandWhite 34 months ago
There's no way these writers could sit down and watch the shows, as original viewers saw them. There is just too much competition in television and streaming services now. The whole mindset about television has changed. So, it comes down to researching a bunch of material, reading interviews, and reviews. The names are just that, not really the characters we (original viewers) came to know, as if they were our friends. Sutton or Carter would be interchangeable, unless you'd paid attention to the credits, as part of the enjoyment. In terms of the proof reading, it never seems to improve, which is surprising. I can't see them churning out that much material, that is should be an issue. Curious. But we've always assumed they are interns (non-paid jobs, held just for the experience gained).
Like Reply Delete

15inchBlackandWhite Pacificsun 34 months ago
I think if they are going to take a job writing for a classic TV website they should at least take the time to familiarize themselves with the material.
Like (1) Reply Delete
Moody Pacificsun 34 months ago
There's really no excuse for unprofessional & sloppy work. I don't care if they are interns they should be more thorough. This website is the public face of METV & by extension Wiegel and this reflects on them as a company. I would think that they would want to present a more professional image no matter what the subject matter is. Yes, these quizzes are fun & I like doing them but the mistakes & lack of attention to detail are just ridiculous IMO. I've had interns working for me & I would never tolerate this sort of sloppiness. They just need to pay more attention to what they are doing before they post something. It doesn't take much to do that.
Like (1) Reply Delete

Or drag a file here to upload
Moody 34 months ago
In #1 - what is a "mittle" town? In#2 its Sergeant Carter not Sergeant Sutton. The actor's name was Frank Sutton. The character he played was Vince Carter. Don't these people ever proofread anything before they post it? The sloppiness is unbelievable!
Like Reply Delete

jeopardyhead Moody 14 months ago
Update: They corrected those mistakes.
Like Reply Delete

cperrynaples 34 months ago
Wasn't this the same lot where "The City On The Edge Of Forever" was shot? We all saw the commercial where Kirk & Spock travel to Mayberry!
Like (2) Reply Delete

DaleWarshaw cperrynaples 34 months ago
Yes, it was, and other Star Trek episodes including "Miri" and "Return of the Archons."
Like Reply Delete

ELEANOR DaleWarshaw 34 months ago
Yes, indeed they shot Star Trek on the same lot. Also, those long shots of the lots are just too tiny. Didn't occur to them to make them larger?
Like (1) Reply Delete