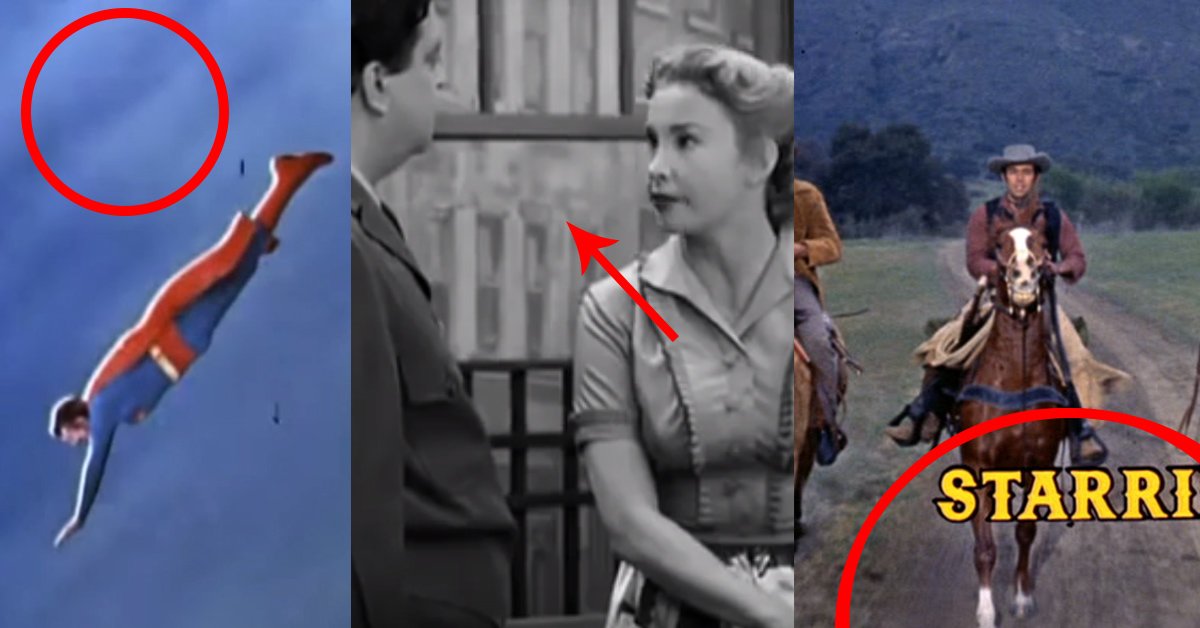 Some of the earliest hit shows had to get creative to convince viewers they weren't looking at a studio set, but actually a posh apartment in New York or a family home in Mayfield. They took on the enormous task to figure out how to make Superman fly and recreate the Old West, all on a budget.

The imaginative thinking of these pioneers of TV took us so far that this period is often referred to as the Golden Age of Television, delivering classics like I Love Lucy, The Twilight Zone and Gunsmoke.

Of course, because of the time, however, they didn't get every little thing right when it came to 1950s television. Here, we present you with some of the most minor goofs and errors from hit Fifties shows that serious fans of the decade have been pointing out for decades. See how many you've caught!

In season two of I Love Lucy, the Ricardos upgrade their living space and move into apartment 3B. You can see the number and letter on the front door. However, the following season, it has changed to 3D, as seen in "The French Revue." Why the change? In the prior episode, "Lucy Tells the Truth," the writers had Lucy say her apartment number is "3D" in an audition to make a pun work.

2. You can see tire tracks on the road the Bonanza boys ride in on. 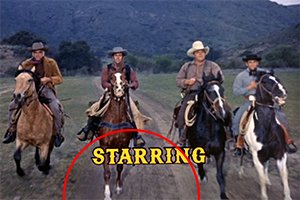 In the first season of Bonanza, when the boys are riding up in the opening credits, you can see tire tracks on the road their horses trod upon. Since Bonanza is set in a time before cars were invented, this is an anachronism the biggest Bonanza fans have protested over time. (The thinking goes the tracks were from the truck holding the camera crew filming the scene, so it was a little unavoidable.)

3. The scene outside The Honeymooners' apartment changes. 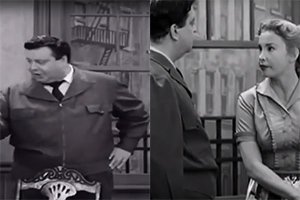 So much of The Honeymooners takes place in the Kramdens' apartment, and in particular, many conversations take place in front of the window right by the front door. Keep an eye on this window and you'll notice sometimes it shows a scene with fire escapes, and sometimes the scene has no fire escapes, sometimes flipping back and forth within a single episode.

Ever wished you could be a fly on the wall when Perry and Della were talking out details to a new case? Well, here's a literal fly crawling up the camera in the episode "The Case of the Nervous Accomplice."

5. Wranglers didn't exist in Rawhide's era, but everybody wears them anyways. 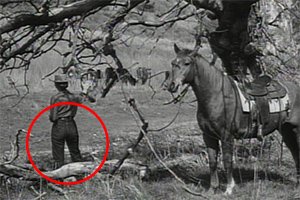 Wranglers had to come out and confirm that their jeans could not have existed to costume the cast and guest stars on Rawhide, but that didn't keep Gil Favor from regularly sporting a pair. The company was founded in 1904, but they didn't even start making jeans until 1947, which the Western's biggest fans have noted doesn't quite saddle up with a show set in the 1860s. 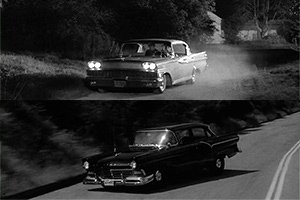 In "The Hitch-Hiker," we watch Nan Adams drive for what feels like forever for everybody involved, and her car is a light-colored Mercury. But in a pivotal scene where Nan snaps at the titular hitch-hiker, she swerves that car and for just a moment, her car is changed out for a much darker car that is clearly a different model if you compare the tail fins and headlights.

7. The clouds give away the camera trick on Adventures of Superman

In Adventures of Superman, any time Clark Kent takes to the skies, he's typically seen flying horizontally. Every now and again, they'd show Superman diving down, though, and that's when attentive fans have noticed that the clouds kind of give away how the effect is being achieved. Even though Superman appears to be flying at a diagonal, the clouds have turned the same angle he has.

8. The grave markers blow in the wind on Gunsmoke.

Here's a divisive "error" among Gunsmoke fans. Some have noticed that if you look quickly in the graveyard scene in Gunsmoke's first season, you can tell the grave markers are made of cardboard or some other light material, because they blow in the wind. Other fans insist this is actually historically accurate, as back in Gunsmoke's time, grave markers were flimsy. Which side are you on? Error or accuracy?

9. The age difference between Wally and Beaver changes. 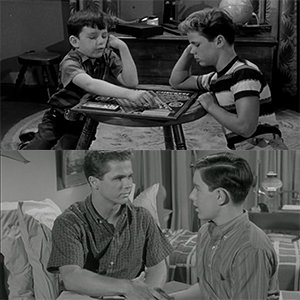 When Leave It to Beaver starts, it's established that Wally is 12 years old and in the 8th grade. Beaver is "almost 8" and in the second grade. But somewhere in those six seasons, while Beaver aged at a normal pace, Wally's growth seemed to slow. By the final season, Wally is a senior in high school (which puts him five years down the road), and Beaver is graduating 8th grade (6 years past his second grade start). The math seems a little off, but who's counting?

See more minor goofs from Leave It to Beaver! 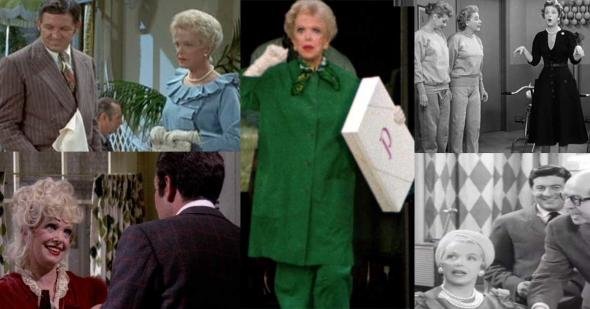 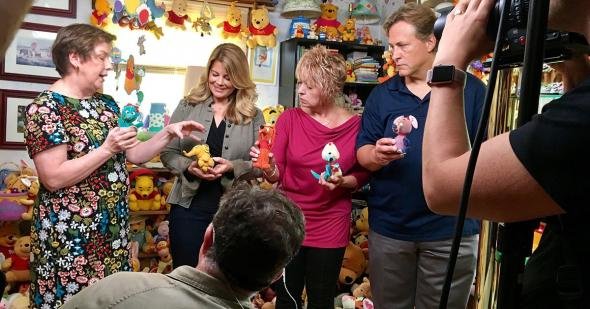 JamesKRaz 27 days ago
An Error in 'Grease"-- John Trvoltra/Ovlia-Newton John. Dancing Scene... Noticing, 'AMTRAK'-- Go-By. If Anybody, knows Railroads.. The Show was that of the Late-50s or so.. 'AMTRAK', was Not in Service at that time-frame. Being in California-- could be UP/SP/or that of a different carrier.

DFB 13 months ago
I always considered the possibility that Wally being left back for a year and the family never mentioned it....
Like Reply Delete

Wiseguy 27 months ago
#1 is not a goof or error because it was done on purpose.
Like Reply Delete

Wiseguy 27 months ago
Every TV series in the history of mankind have these kind of errors.
Like Reply Delete

MaryKleinsmith 27 months ago
Big one of many, I'm sure, MeTV missed: the car that you can see in the background in an episode of Laramie.
Like (1) Reply Delete

RandyJepsen 27 months ago
There is an episode of MANNIX with a long chase scene out in the country. The color and makes of the cars change during the chase.

In one B&W hour episode of GUNSMOKE, you can see butterflies flying around in the background when Matt is talking to someone out in the countryside.

In the episode COVENTRY of GUNSMOKE from 1962, a tree branch falls on the badguy during a storm. Just before the branch falls, you can clearly see a rope holding the branch up in the tree.

In another B&W hour episode of GUNSMOKE, Matt is kneeling down looking at the guy he shot & keeps missing his holster as he tries to put his gun in it.
Like Reply Delete

x60hz11 RandyJepsen 21 months ago
That's actually a blooper. I saw that. very funny!
Like Reply Delete

MannyOlavarria 27 months ago
I’m surprised that Star Trek didn’t make the list. In the Charlie X episode is a scene where Kirk goes into a turbo lift with Charlie to go up to the bridge. When they enter the turbo lift Kirk is wearing his classic yellowish gold top. When he arrives on the bridge he’s wearing the green top that he wore on some episodes.
Like Reply Delete

Tresix 27 months ago
I know it's not a Fifties' show, but in the first season of "Living Single", the girls' apartment opened right onto the front porch. After the first season, there was a hallway with stairs outside the door.
Like (1) Reply Delete

TomTerrrific 27 months ago
Little bloopers like this don't bother me. If you pay attention you routinely notice when an outdoors scene is supposed to be taking place early in the morning, but you can tell by the shadows that it must be around noon. They probably did most of their outdoor filming around noon to take advantage of the light. I remember an episode of the Rifleman when he was dragging himself through the desert, dying of thirst, and there were tire tracks on the sand behind him. :)
Like Reply Delete

Fred_Clampett 27 months ago
I'd never noticed these, but as far as age difference, the small child in Family Ties aged 7 years in three seasons, while MJFox only finished one year of college. Something similar happened in Growing Pains as well.
Like Reply Delete

cperrynaples 27 months ago
5 is kinda weird in that while Wrangler jeans didn't exist until 1947, Levi jeans did exist in that time period. Perhaps those jeans are really Levis and not Wranglers...LOL!!
Like Reply Delete

cperrynaples cperrynaples 27 months ago
PS For 9 I suspect Wally and Eddie got in some sort of trouble where they were held back a grade! I speak with experiance on this topic..LOL!!
Like (2) Reply Delete

stephaniestavropoulos cperrynaples 27 months ago
If we're talking about accurate apparel, then Levi's wouldn't be right either. Even though Levi's is the oldest jeans company {1871, I believe,} Rawhide was set during the 1860's, so Levis wouldn't be right either.
When I saw that tombstone moving in Gunsmoke, the first thing I I thought of was {now I know this isn't a nighttime show;} Dark Shadows. You want to see props/sets {including tombstones!} move, than check out any episode of DS! I don't recall seeing a show with more goofs, blunders, bloopers whatever than DS. They couldn't stop taping, {unless it was really bad,} because it cost so much to tape it.
Like Reply Delete

stephaniestavropoulos cperrynaples 27 months ago
Like w/Perry Mason, DS also had an issue or two with a fly.
Like Reply Delete

MrsPhilHarris stephaniestavropoulos 27 months ago
You are so right! Microphone booms move into the shot, shadows, etc. Always something on Dark Shadows.
Like Reply Delete

stephaniestavropoulos MrsPhilHarris 27 months ago
It's nice to know a fellow Dark Shadows fan! Which reminds me something about my sister. {Sorry JeffTanner if my "long winded" responses aren't to your liking. I know of at least one person who doesn't mind them. {Thanks MrsPhilHarris!}
Before I tell you about my sister, I just remembered a cartoon drawing. Years ago, I was a member of one of the DS fan clubs. {Don't remember the name but I think it was "headquartered in one of the Chicago suburbs. Either it was, or a MAN FROM U.N.C.L.E. FC was.} Anyway....The cartoon {just one square I think;} showed two female fans one had a perplexed look on her face.{I don't think she said anything.} The other's word balloon said "Quentin just walked into the room." On the bottom of the frame, several pairs of feet/legs are up in the air; no bodies, just feel/legs.I think you can figure out what happened to them: They all fainted!
Now, about my sister. {If you've read this far JeffTanner, the next part is {to quote Sister Connelly, a history teacher I had in High School: "Short sweet and to the point." Which is how she wanted our essay answers to be.}
Becky had this best friend, her name was Debbie. They both were DS fans. Debbie went on vacation and on at least one of the post cards she sent Becky, she asked her to keep Debbie up to date on the goings on in Collinsport/at Collinwood. Becky and Debbie were fans of Quentin. I was partial towards Barnabas. Who was your favorite?
Like Reply Delete

cperrynaples stephaniestavropoulos 27 months ago
Yes, you are so right about the mistakes on Dark Shadows, and it was my sister's favorite soap opera!
Like Reply Delete