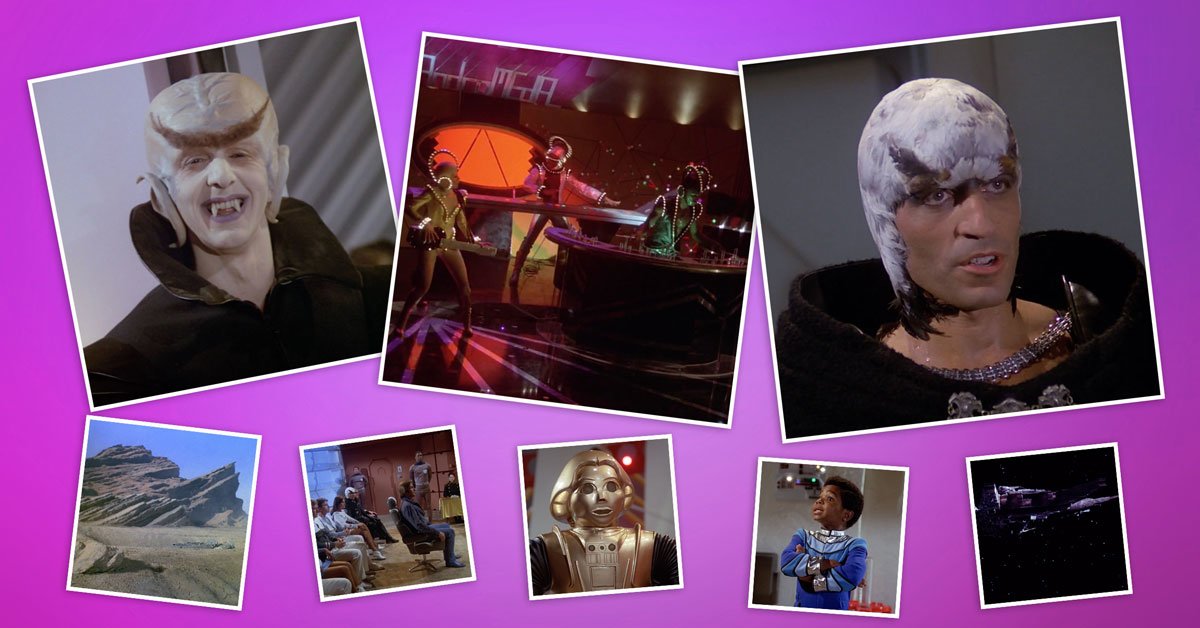 Buck Rogers in the 25th Century came out at a time when science-fiction had gone mainstream. Two years before the show's premiere, Star Wars had shattered box office records and changed the cinema landscape forever. Star Trek was gaining popularity through reruns and would release a feature film three months after Buck Rogers debuted in 1979.

Thus, it's no surprise that both of these renowned sci-fi franchises had a profound influence on the series. Some things are general inspirations while others are almost direct parallels. In its first season, Buck Rogers had more of a traditional space-adventure feel like Star Wars. The show retooled in season two, taking more of a Star Trek direction, with Buck serving aboard a ship called Searcher. Of course, both Star Wars and Star Trek owed a huge debut to the character Buck Rogers, a pulp action hero who was introduced in 1928 and featured in radio programs, film series and comic strips for decades.

Here are eight things from Buck Rogers in the 25th Century that, in one way or another, had already been done years earlier in Star Trek or Star Wars. 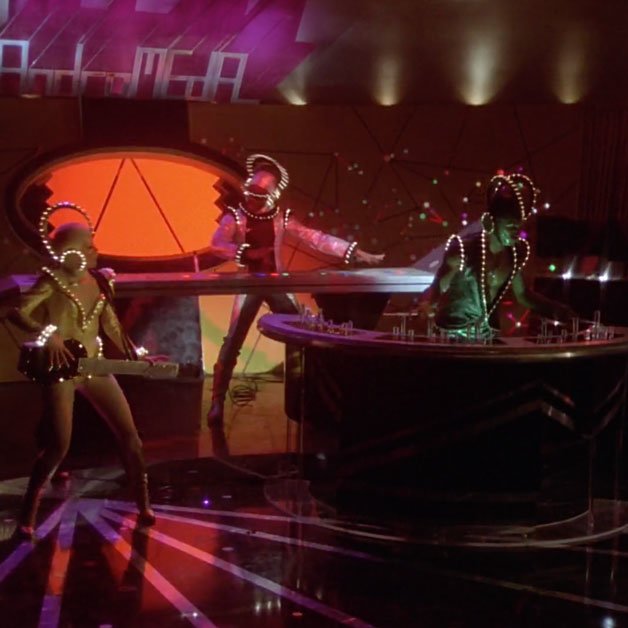 In the cantina scene, Star Wars has bug-eyed aliens who play futuristic (or ancient?) jazz. Buck Rogers has space rock 'n' roll! A guitarist plays an instrument with no strings, a percussionist taps glass cylinders, a keyboardist waves his hands above a multicolored light-up table and they’re all wearing strings of Christmas lights! The music was actually quite sinister in the episode "Space Rockers" because it was used to send a hypnotic signal that turned the young audience into a destructive mob. Things getting smashed at a rock concert? Not sure how they came up with that idea… 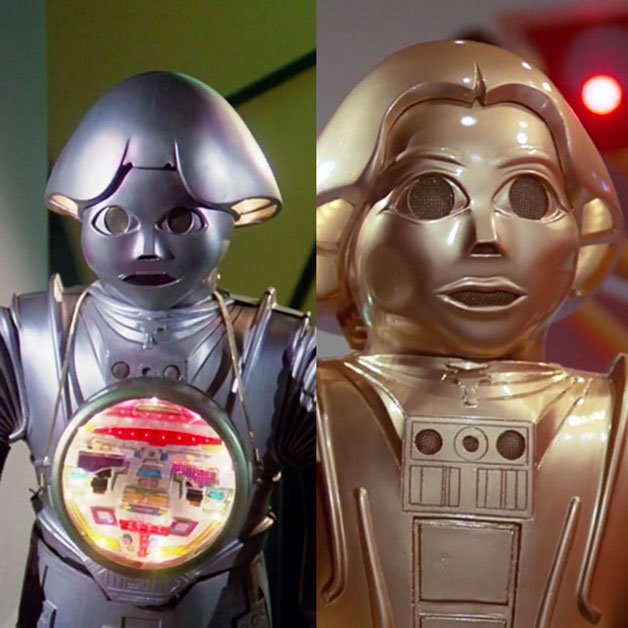 Two of the most recognizable robots on the planet are C-3PO and R2-D2 from Star Wars. But they aren't the only mechanical duo who play off each other for comic relief. In Buck Rogers, Twiki, voiced by the incomparable Mel Blanc, is always ready with a good one-liner and is much more like a traditional robot. Dr. Theopolis is a small, round and extremely advanced computer that Twiki frequently carries around his neck. Twiki's appearance is clearly inspired by C-3PO, especially the gold, female version of Twiki, Tina, who appears in one episode. (Though to give credit where it's due, they both are heavily inspired by the "false Maria" in 1927's Metropolis.) 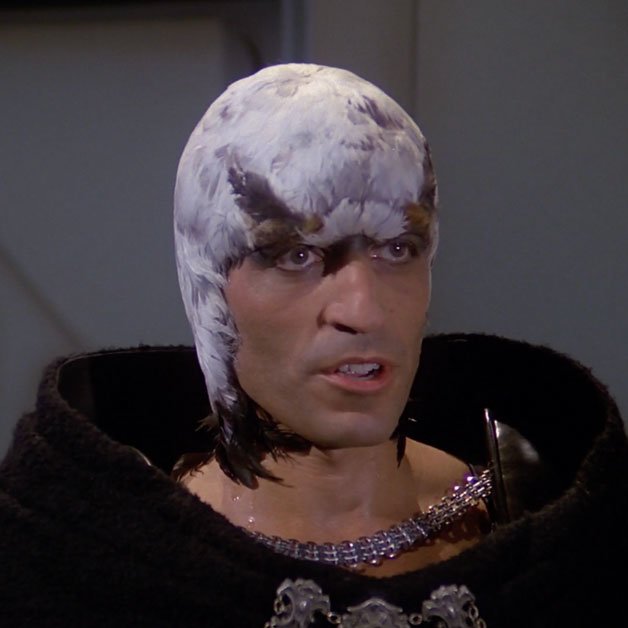 Spock from Star Trek is a trusted confidant of Captain Kirk. His dedication to logic makes him more likely to be the butt of a joke than to make one himself. Hawk from Buck Rogers shares many of the same traits. A serious, second-in-command with non-human heritage. They also have the same eyebrows, though Hawk’s are made of feathers. If pronounced in certain regional dialects, their names even rhyme! 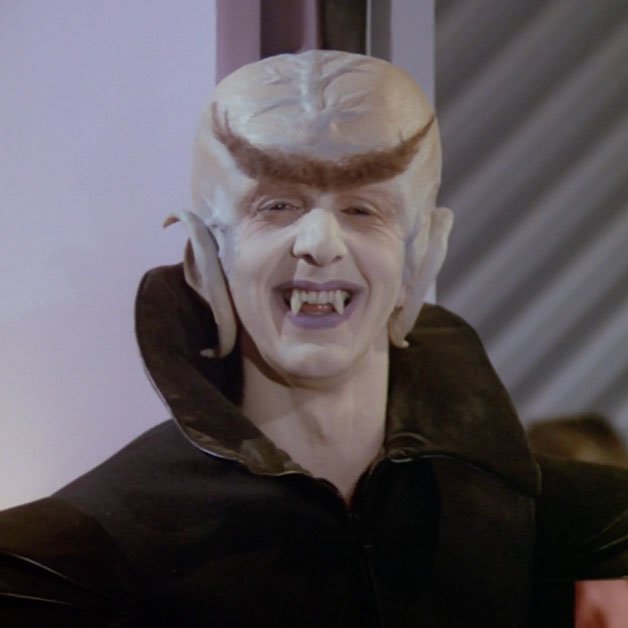 Who remembers the Talosians from Star Trek? They are extremely intelligent beings seen in "The Menagerie: Part 2" which used footage from the original, unaired pilot. They have very pale skin and bulbous, veiny heads. That description also fits something from Buck Rogers – a space vampire! The vampire has a few unique features, though, like elongated ears and a magnificent unibrow.

5. A kid beyond his years 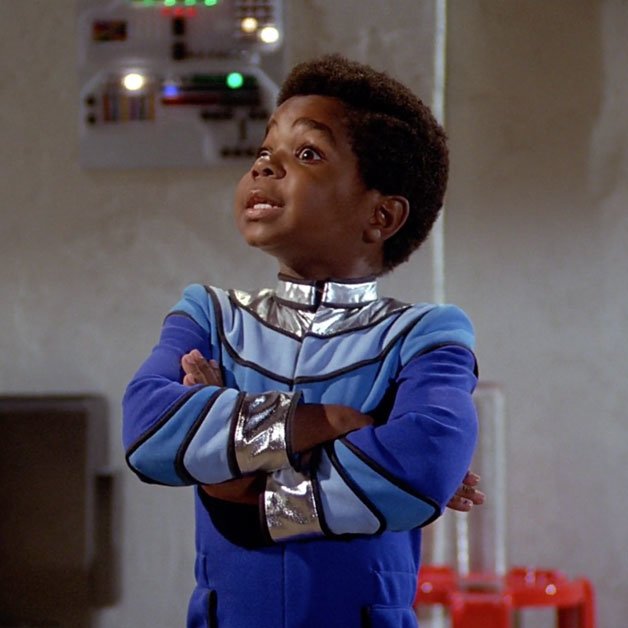 While both Star Trek and Buck Rogers feature boys with special skills, it's far from a direct rip off because the similarities end there. In the Star Trek episode "Charlie X," Kirk and the crew deal with a teenager who must learn to control his extraordinary powers. In the Buck Rogers episode "Cosmic Whiz Kid," Gary Coleman plays a young genius who is almost 500 years old because he figured out a way to cryogenically freeze himself back in the 20th century. 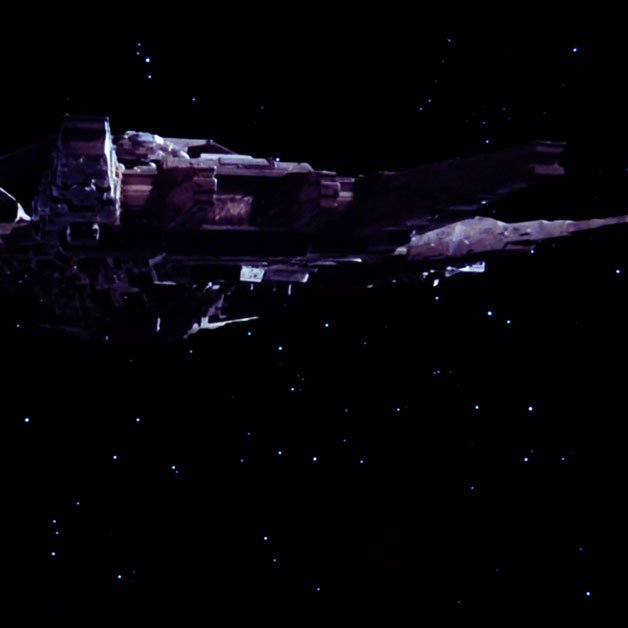 One of the most iconic opening scenes in cinema history is the opening of the original Star Wars as a giant Star Destroyer enters from the top of the frame as if it's right above the audience's head. Buck Rogers replicates this shot in the beginning of the pilot episode except with the giant, villainous ship going the opposite direction — coming towards the camera! 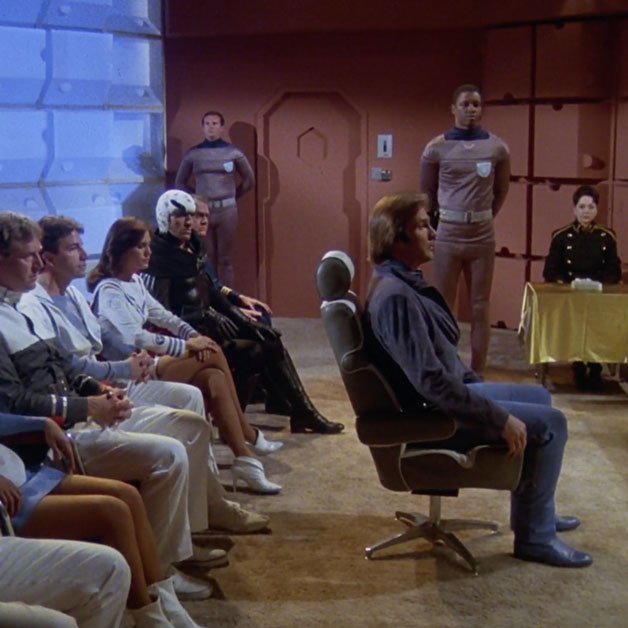 Both Buck Rogers and James T. Kirk stand trial in certain episodes. Kirk is court martialed for the death of an Enterprise crewmember, while Buck must face judgement for his ties to the nuclear war that nearly destroyed Earth in 1987. Even though Buck is back on his home planet for the trial, it's still supposed to be centuries in the future. The carpet, normal office chair and tacky gold tablecloths tell a different story. 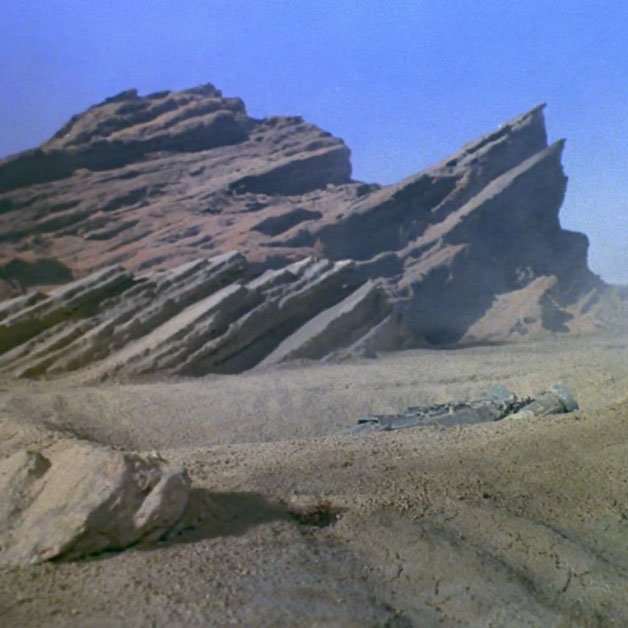 In the Sierra Pelona Mountains just north of Los Angeles, strange rock formations jut out at interesting angles. It is an area known as Vasquez Rocks. If you've seen any type of western or science fiction entertainment in the past half-century, chances are you’ve seen Vasquez Rocks. They are instantly recognizable to anyone who's seen the 1994 live-action Flintstones movie. The geological formations have also been used in countless music videos and commercials. The rocks portray many different planets in multiple Star Trek episodes and, of course, they also appear in Buck Rogers.

WGH 11 months ago
I used to think Star Trek & Star Wars were so original, until I started watching science-fiction movies from the 1930s to the 1960s.

And reading old comic books from the 50s, you find Reagan's referred to as "blasters ". Even the laser swords are from the 50s.

Star Wars is simply Camelot with the science-fiction spin. Obi Wan is the wizard Merlin. Luke is the kid that pulled the sword from the stone. There's a princess. There are Squires… The droids. And even Lancelot, Hans Solo.

And the black knight… Darth Vader anyone?

all that was missing was the roundtable, until you got to the Jedi Council in the earlier prequels.
Like Reply Delete

Mike7777 16 months ago
The article missed an important detail. In the episode of Buck Rogers that featured the Vasquez Rocks, the guest star was Mark Lenard (Spock's father).

MrsPhilHarris 26 months ago
I don't think I have ever seen an episode.
Like Reply Delete

PhilipJamesOkkerse 26 months ago
Bring Back some of the shows from the 60's and 70's.

TexasGreek 26 months ago
Some of these are a stretch to propose that they are rip offs. If shooting at Vasquez Rocks is a ripoff, there would be a LOT of film producers quaking in their boots from lawsuits. Sooner or later there would be no place on earth to shoot a film as it would all be done before. I wonder if Hollywood is in that place now with their current "idea department"? Do a comparison of ripoffs that Hollywood has done with BBC programming since the 1950's. I was amazed that a lot of the shows I watched weren't "good old american shows". They are/were ripoffs from over the pond! Steptoe and Son is a good example, over here it became Sanford and Son. Both were great shows! I'm just trying to define ripoff when it comes to this subject.
Like (2) Reply Delete

stephaniestavropoulos TexasGreek 26 months ago
"Man About The House" translates "across the pond" as "Three's Company." "Till Death Us Do Part," translates into All In The Family.
Like (1) Reply Delete

Barry22 26 months ago
Buck Rogers was a terrible show.
Like Reply Delete

cassandrawht Barry22 26 months ago
No and Yes. I watched the entire series when it first aired. First year, fresh and fun. Second year, yuck. I guess I missed Tim O'Connor (Dr Huer); Pamela Hensley (Princess Ardala) and Erin Gray (Colonel Wilma Deering). I know Wilma was in the second season, but in a much smaller and unimportant role. Also in the first season, Buster Crabbe made a cameo appearance as pilot Gordon in an episode. I was born in the 50's and my weekend mornings were filled with the adventures of Buck Rogers and Flash Gordon serials both starring Buster Crabbe. Seeing him again as "Gordon" made me love the first season of Buck Rogers in the 5th Century.
Like (1) Reply Delete

stephaniestavropoulos 26 months ago
It must've been a slow news day at METV if they came up with an article like this. What's next part 2: Parallels between Buck Rogers of the 25th Century and Duck Dodgers of the 24th 1/2 Century?
Like Reply Delete

Or drag a file here to upload
Moody 26 months ago
I liked Buck Rogers & thought it had great potential. One thing I didn't like about it was that stupid robot Twiki. The show would've been so much better without that character. But I guess they had to have something for the kids.
Like (2) Reply Delete

cassandrawht Moody 26 months ago
Kids! My father, in his sixies at the time, loved two things in Buck Rogers, Twiki and Princess Ardala, for two different reasons.

Like (1) Reply Delete
Moody cassandrawht 26 months ago
Hey, there's a little kid in all of us!
Like Reply Delete

CarlyC Moody 21 months ago
Twiki was a side kick & made the show fun. Ardala was the cheesecake 4 the male viewers as was Wilma.
Like Reply Delete

Pacificsun 26 months ago
I like No. 8, the trivia about Vasquez Rocks. I think I've seen them in other series. They've always been a mystery.
Like (2) Reply Delete

daDoctah Pacificsun 26 months ago
We lived not far from there in the sixties when a lot of those iconic shows were being made. I especially recognize them from two Star Trek episodes (the one where Kirk fights the Gorn, and "Friday's Child" where Dr McCoy delivers the line "I'm a doctor, not an escalator") and for some reason from The High Chaparral (the outdoor set was left standing as one of the few non-rock-formation landmarks in the park).
Like (1) Reply Delete