You may have forgotten about these bygone chips and crackers, but your taste buds have not. 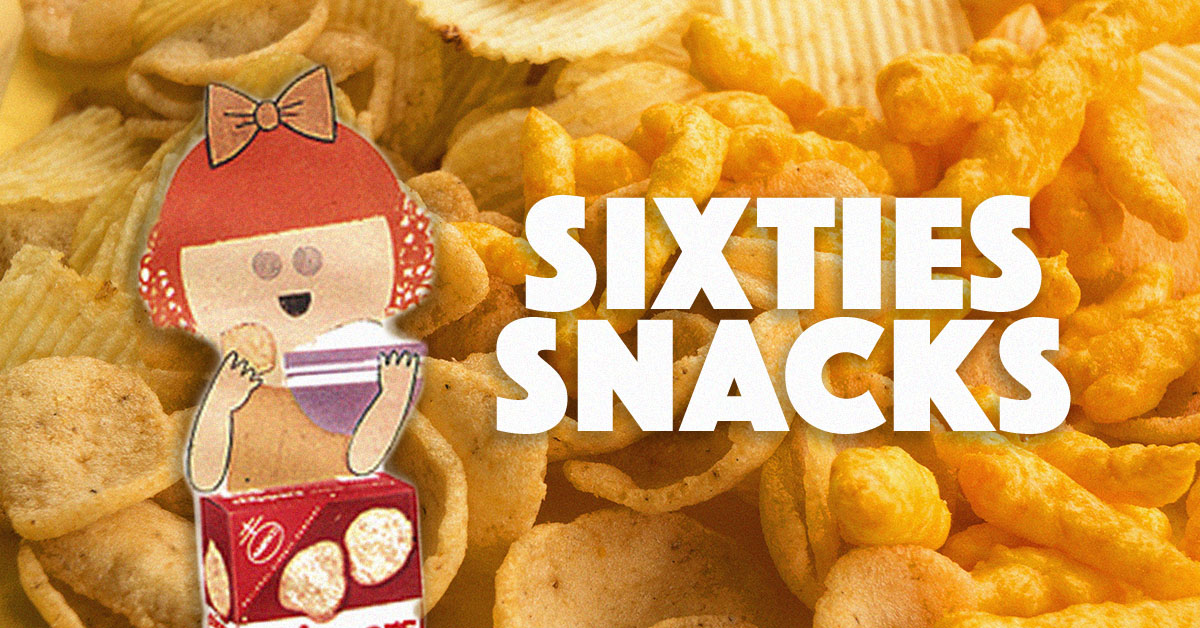 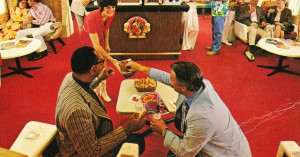 Nothing beats kicking back on the couch with a bowl of chips and a favorite sitcom. It's no wonder why we use the term "couch potato." As television became colorful and wild in the 1960s, so too did our snack foods develop fun new shapes and flavors.

The snack aisle at your local grocery store can be overwhelming. Rewind the clock half a century, and there were dozens of ways to cure your salt cravings. Sadly, you will no longer find these discontinued crackers and chips. Here are some bygone snacks from the 1960s, both beloved and bizarre.

Which one would you want to eat? 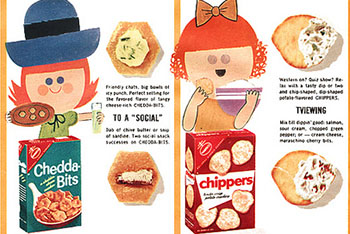 Nabisco dominated the snack market. No big news there. But one forgets just how many cracker varieties the National Biscuit Company cooked up in its factories. One ad alone lists 10 options, and that was a fraction of its product line. The ad proclaims its crisp potato Chippers are perfect for "TVIEWING," especially Westerns and quiz shows. 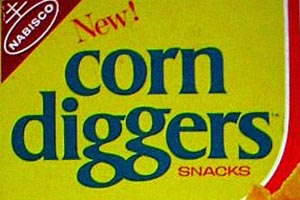 These dippable corn puffs had a pinched shape to help scooping and boasted of their "hot-popped corn taste." 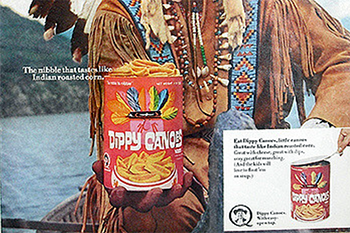 Quaker went with a Native American theme for its canned, canoe-shaped corn chips that supposedly tasted "like Indian roasted corn." As you will see below, this was not uncommon. Perhaps history buffs were excited by a snack with a name that played off the Battle of Tippecanoe and the Whig party campaign song of 1840. 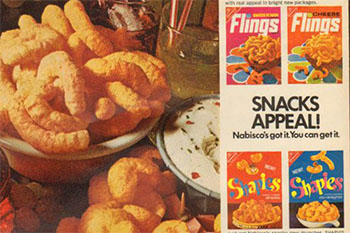 Nabisco's Flings were like curled cheese puffs, though they came in savory Swiss N' Ham and Chicken varieties, too. Mmm… ham puffs. 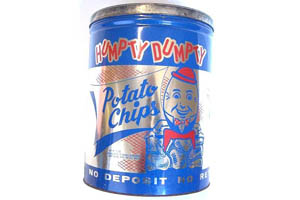 We could have included many brands of potato chips in tin cans, like Chesty. Humpty Dumpty, however, was the company that threw in collectible plastic coins in its tins, which would feature breeds of dogs, airplanes or football players. These days, you need a smartphone to claim your Cracker Jack prize. 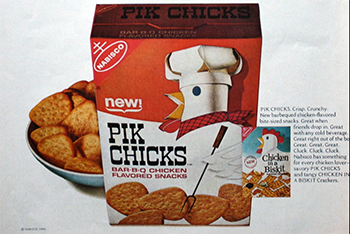 Chicken in a Biskit has long had a cult following, and for a brief time (circa 1966 in this ad) Nabisco offered this Bar-B-Q Chicken twist on the cracker. 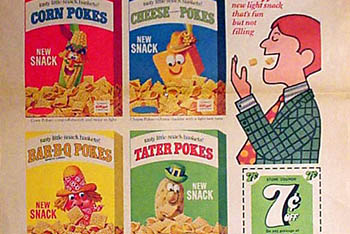 The Kellogg's ad copy proclaimed, "A Poke in the mouth makes a hit in the tummy." Corn Pokes seem like an ideal pairing for Hee Haw. 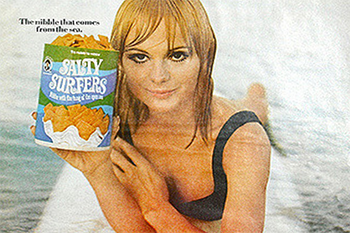 The surf craze invaded the snack industry, too. Salty Surfers were the sister brand of Dippy Canoes. The tub stated that these snacks had "the tang of the open sea." Sadly, they were not shaped like surfboards. 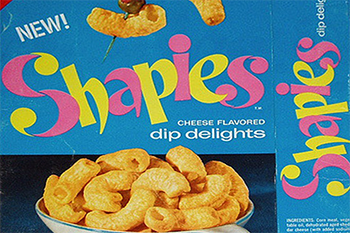 Yep, more Nabisco products. Shapies were essentially hollowed-out Flings, for those on a diet, we suppose. 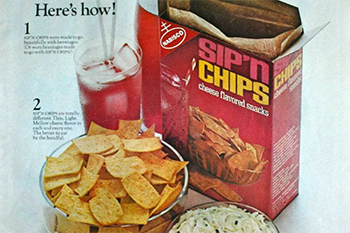 These cheese crackers were highly conceptual, though really rather standard. They were supposedly made to pair with drinks and "designed to fit the curve of your hand." Finally, ergonomic snacking! 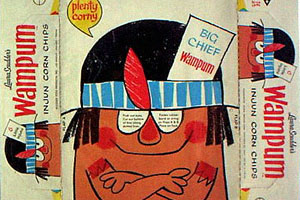 Laura Scudder's offered this competitor to Fritos, and many will swear Wampum was the superior corn chip. As far as its questionable mascot goes, remember that Fritos had its own problematic Frito Bandito. 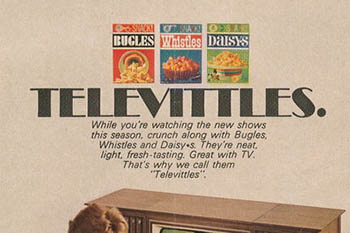 This year, Bugles celebrate their 50th anniversary. When the corn snack made its debut, it had two siblings, Whistles and Daisys, which were basically the same thing in different shapes (tubes and scoops, respectively). The advertising dubbed them "Televittles" and "great with TV." 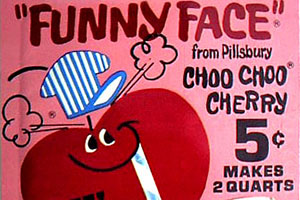 Thirsty yet? Wash down the memories of these snacks with a dozen bygone beverages you will never drink again. READ MORE

Kelley1 28 months ago
Wild, go on vacation to Helen, GA. There is still an IGA there.

On to my question. Speaking of crackers, several years ago they quit making my favorite. It had cereal on top and I believe it was shaped like a stop sign. I would love to know what company made it. Better yet I'd love to have a make-alike recipe for it because my craving is bad enough I'd make my own, and making your own crackers is quite the production. I ate it with aerosol cheese which oddly enough survived the new nutritional regulations.
Like Reply Delete

ASperos 32 months ago
I remember whistles!!! They were yummy!!!
Like Reply Delete

Josie92 33 months ago
Bugles were fun because we could wear them on our fingers and still run around! Mom hated that though telling us we'd poke our eye out doing that!
Like (1) Reply Delete

Or drag a file here to upload
WILD 46 months ago
My mom used to get this for us at IGA when we were up in the country (Ellenburgh, New York; we're from Montreal,quebec). I loved that it came in a cannister with a scoop. Sadly neither Funny Face nor the IGA are still around, but Blue Haven Campground (where we had our trailer) still is.
Like (2) Reply Delete