Where To Watch Shop Store Contact
Home / Stories / We found it: the cutest photo of Clint and Ron Howard goofing off on The Andy Griffith Show set
nostalgiaOpie

We found it: the cutest photo of Clint and Ron Howard goofing off on The Andy Griffith Show set 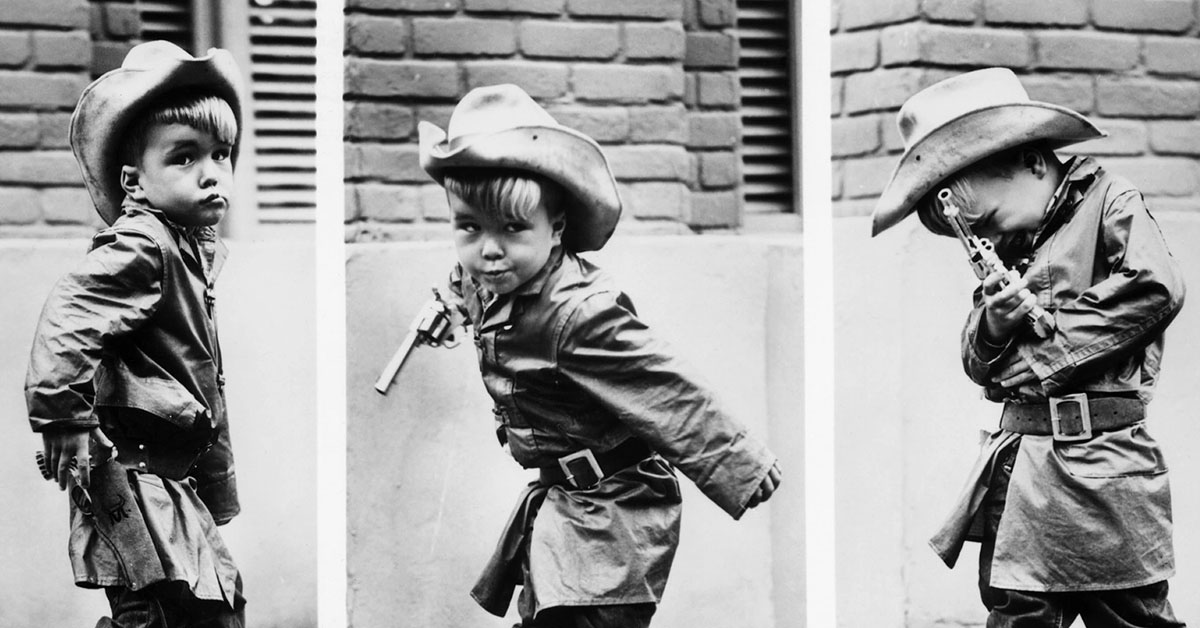 Ron Howard is a full five years older than his younger brother Clint, whose first role ever was on The Andy Griffith Show in a bit part as a Mayberry-roaming kid cowboy. According to Ron, that character came about because Clint was always hanging around set, and one day he actually turned up looking like Leon, and The Andy Griffith Show director Bob Sweeney just ate it up, how adorable the younger brother was.

Ron said, "It just kind of happened. My brother Clint started hanging around The Andy Griffith Show set and the director Bob Sweeney one day just kind of recruited him. And Clint was wearing a cowboy hat and he had a toy gun and they thought that was a cute character, and he became Leon, this kid that was always offering Barney Fife a peanut butter & jelly sandwich. I’m not even sure he had a line of dialogue, but I think he did six or seven episodes."

Clint actually did just five episodes of the classic TV show, but his character was so charming, it remains a memorable part of a show packed full of colorful characters. But even when Clint wasn't on set to do an episode, it seems the younger Howard boy was always around, and there have been some photos from behind the scenes that show the child stars goofing off. Recently while digging through the archives, we found this photo, though, which might just be the cutest photo of Clint and Ron Howard from The Andy Griffith Show set. You decide: 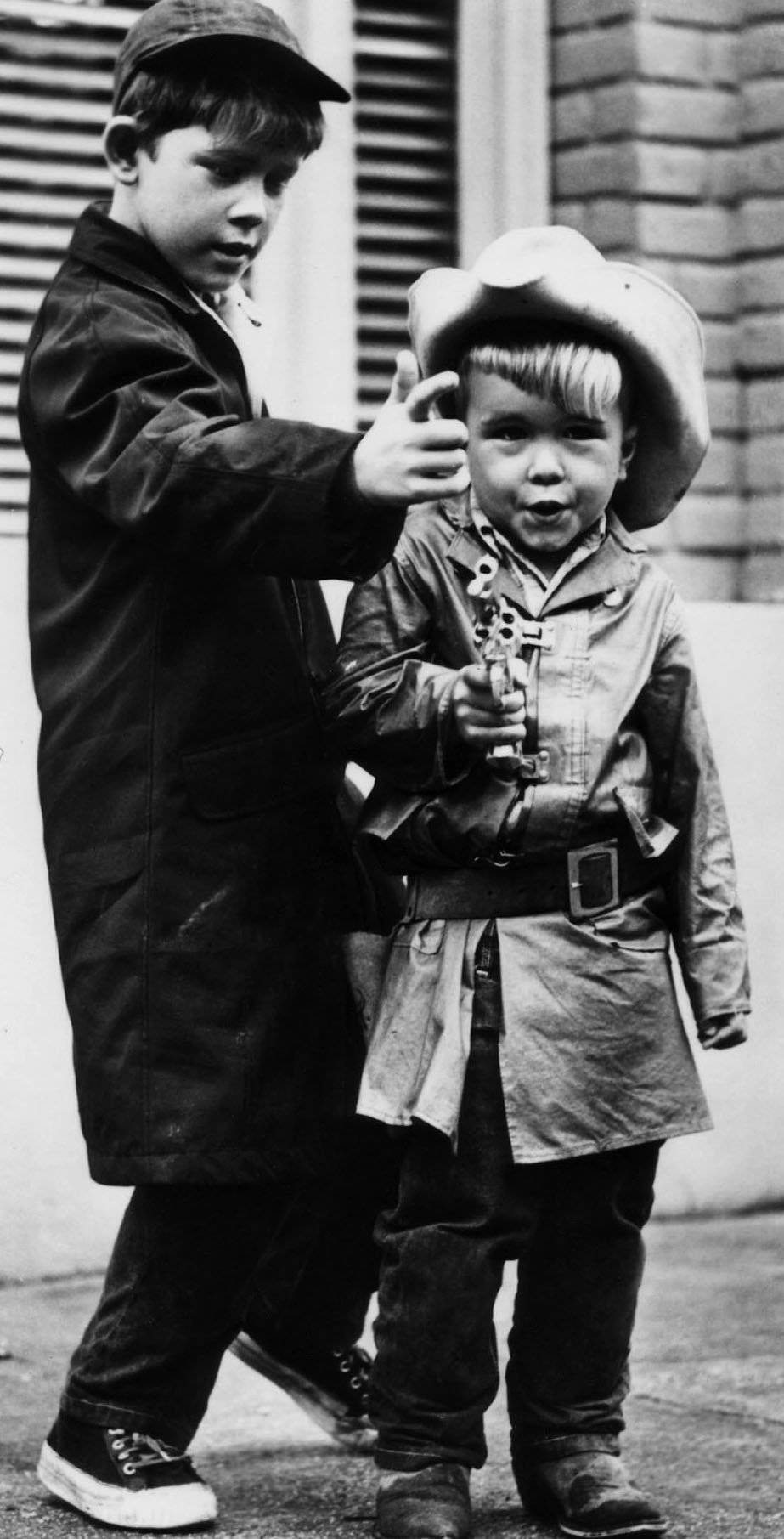 Fans will note the brick Mayberry facade behind the brothers, assuring us this photo was snapped in Desilu Studios. It's a sweet moment captured, with Ron the older brother giving little Clint the spotlight, while imitating his baby brother's character, showing all the generosity of a humble child star, which just plain smacks of the disciplined kind nature that Andy Taylor taught Opie was the right way to be. Either way, looking at the photo just proves the actor who played I Love Lucy's Little Ricky was right about how fun The Andy Griffith Show set was back in the day.

TVFF 10 months ago
Ron and Clint Howard just came out with a book together called "The Boys: A Memoir of Hollywood and Family."

drnogerms 43 months ago
Back in 1990 I actually met Keith Thibodeaux in an apartment complex swimming pool. Very unusual setting.

Since I grew up watching him on TV, it was a real thrill for me.

He was very friendly and receptive to meeting a fan of the I Love Lucy Show - even in a swimming pool.
Like Reply Delete

ToniMc 43 months ago
What a cute pic of Ron and Clint! I'd like an autographed copy please! 😊 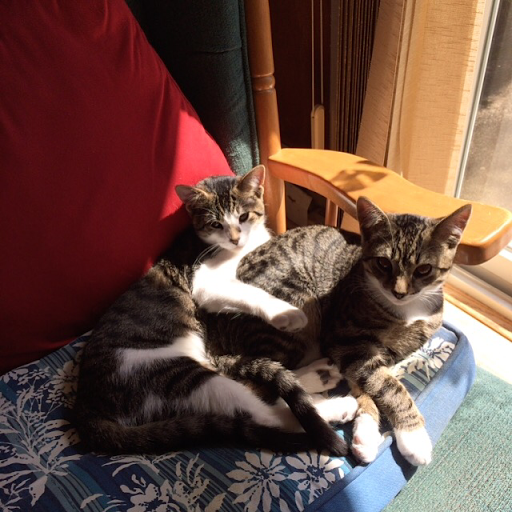 Jan 43 months ago
As Clint Howard was born in 1959 there’s no way he could’ve been Little Ricky on I Love Lucy. The show had stopped production several years before.
Like Reply Delete

teire Jan 43 months ago
Read the link, the line you are referring to links to a previous story about Keith Thibodeaux, the actor who played little Ricky in the final season of I Love Lucy. He later played Opie's friend Johnny Paul, a semi regular character on The Andy Griffith Show.

Pacificsun 43 months ago
These are nice stories to hear!
Like (2) Reply Delete

teire Pacificsun 43 months ago
Yes, they are, sweet photo.
Like (1) Reply Delete

Or drag a file here to upload
DocForbin 43 months ago
Of course people will remember Clint Howard way better for his guest star appearance as Balok on "The Corbomite Maneuver" episode of the original "Star Trek". However, what not too many people may know is that many years later he would play the Ferengi Muk on the "Acquisition" episode of the "Enterprise" prequel series. Anyone want some tranya? LOL
Like (1) Reply Delete

ETristanBooth PeterGuerin 43 months ago
I've always wondered what Tranya tastes like. It's kind of orange, suggesting a citrus flavor, but who knows?
Like (2) Reply Delete