Burnett: "Tim Conway is merciless in his comedy."

"Tim Conway is merciless in his comedy," Carol Burnett told MeTV of her costar on The Carol Burnett Show during a 2018 interview. "He would glom onto something, some bit of business that we hadn't even rehearsed and there he would be in front of the studio audience, doing stuff that we had never seen before. And the cameramen were having to wing it, and the director and everything, but it turned out to be pure gold. He just would keep at it and keep at it until the audience could no longer laugh."

Watch the video above to hear Carol break down Conway's magic further, including highlights of Conway's unique brand of hilarity from the show. 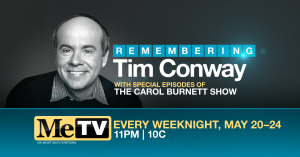 For many fans of The Carol Burnett Show, Tim Conway will forever be remembered as one of the show's best cast members. However, in an interview with Archive of American Television, Burnett once explained how these fans often forget that although Conway was a frequent guest star on the show from the very start, he didn't officially join the cast until the ninth season. Burnett said:

"Conway had been a guest on The Garry Moore Show. I’d seen him on McHale’s Navy, and there’s nobody funnier – in the world. I don’t think – than Tim Conway. But he was on our show (The Carol Burnett Show) as a guest pretty regularly: once a month, sometimes twice a month. Finally, duh, the epiphany dropped and we signed him as a regular on the ninth year. Everbody thinks he was with us the whole 11 years, as in every week, but not till the ninth year.”

In her conversation with MeTV, Burnett went on to describe the special friendship between Conway and Harvey Korman on The Carol Burnett Show, which she said led to countless laughs over time for a very TIm Conway reason: "I think it was his goal in life to destroy poor Harvey Korman. He couldn't wait to be in a sketch with Harvey where he'd again, improvise and take off. Harvey, bless his heart, he prided himself in being a very serious comedic actor, but he could not hold it together when Tim got going, and it was delicious."

This impish behavior of Conway's led perhaps most famously to "The Dentist" sketch, which Burnett described in detail to the Archive of American Television:

"This started to happen, the first time I remember very clearly, was when they did 'The Dentist' sketch… Harvey was a prisoner in the chair, and Tim was a new dentist,  who’d just gotten out of dental school and Harvey was his first patient. Well, Tim winds up – and this wasn’t in the script, Tim added this once we were on the air, taping in front of the audience; the crew didn’t know what was going on, poor Harvey was helpless – Tim started shooting himself 'accidentally' with the Novocaine and he shot himself in the hip, and then he couldn’t walk, and then he shot him in the hand and he couldn’t move. Harvey was just destroyed. Destroyed. He was laughing so hard, tears were coming down."

Watch Conway and Korman revive "The Dentist" sketch with even more Novocaine:

Ultimately, Burnett was able to sweetly sum up the true source of all this fun between the seasoned comedic performers when she said simply, "They love each other."

cperrynaples 32 months ago
I've been watching a few of the lost Carols and one thing really bugs me: Instead of running the original closing credits full screen, they box them in the left hand corner while showing the exact same names in bigger print on the right side! Every other MeTV show is full screen original closings, unlike the scrunches on Antenna TV, so why is this show an exception?
Like Reply Delete

EllisClevenger 32 months ago
Favorite skit by Tim Conway. The 'Elephant Stories'. A gem for the ages. (See YouTube).

MrsP58 EllisClevenger 32 months ago
The Siamese elephants joined at the end of their trunks with the monkey running back and forth across their trunks!
Like Reply Delete

JessicaEFulcher 32 months ago
I am making $165 an hour working from home. i was greatly surprised at the same time as my neighbour advised me she changed into averaging $ninety five however I see the way it works now. I experience masses freedom now that i'm my non-public boss. that is what I do......
↓↓↓↓COPY THIS SITE↓↓↓↓