America’s #1 Classic Television Network
Find your local MeTV station
Where to watch
See when your favorite shows are on
See schedule
Personalize MeTV.com to follow your favorite shows
Free sign-up
Shop your favorite shows in the MeTV Store
Shop Now
Home / Stories / The story behind Raymond Burr's arm sling has the twists and lies of a Perry Mason mystery
Did you know?1960s

Learn the real reason the star severed all the muscles in his shoulder. 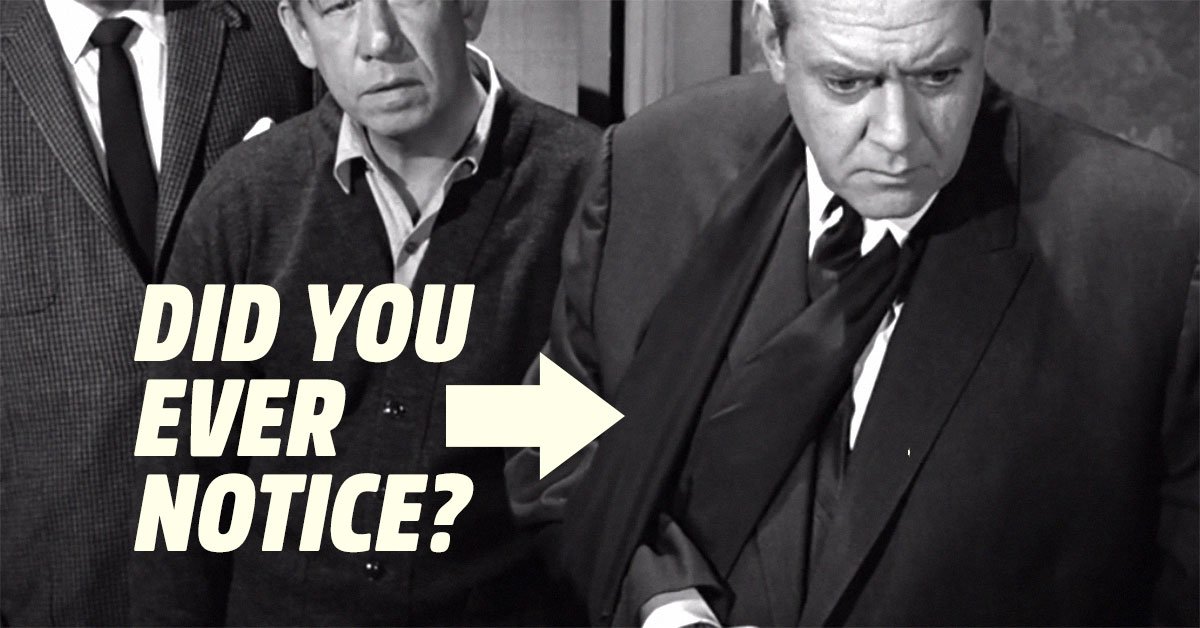 "The Case of the Careless Kitten" is an outlier amongst the hundreds of Perry Mason mysteries for one major reason — there is not a single scene inside a courtroom. Look closer and you'll spot another curiosity in this episode. The ace attorney carries his left arm in a sling throughout the tale.

It is not the only episode in which we see Burr's arm immobilized. In fact, it is the last of four season-eight installments with an injured Perry. He wears it well, camouflaging the shadowy sling against the dark fabric of his suit.

Which leads to the question — what happened to Raymond Burr? Well, it takes the investigative skills of a Paul Drake to get to the bottom of this tall tale.

The July 24, 1965, issue of TV Guide arrived with a painting of Perry Mason on the front. "Raymond Burr: Alone on a Treadmill," the cover line declared. In the feature story, "Pleading His Own Case" by Dwight Whitney, we learned that Burr took several trips to Vietnam to entertain the troops as part of the USO. It goes on to say that during his third trip, the TV star suffered a severe shoulder injury when the helicopter transporting him came under fire. 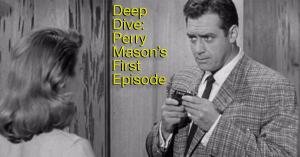 As recently as 1997, his partner, Robert Benevides, reiterated the story, as told to the author in Jim Davidson's The Perry Mason Book: A Comprehensive Guide to America's Favorite Defender of Justice (2014).

While the tireless workaholic certainly did travel to Vietnam to support the troops, Burr's shoulder injury has a more mundane explanation, in a more peaceful corner of the tropical Pacific.

In the notes of a phone call between Perry Mason producer Gail Patrick Jackson and character creator Erle Stanley Gardner, we learn the kernel of the truth.

"Found out what was really wrong with Burr," Patrick wrote, as quoted by Jim Davidson in his book. "…apparently he tore a bicep tendon lifting a boulder on Kawaii [sic]."

Benevides eventually fessed up and corroborated this account. "Gail Patrick Jackson had it right," he said in The Perry Mason Book. In actually, Burr was returning from one of his Vietnam visits. He flew from Saigon to Hawaii, then island-hopping over to the Coco Palms Resort on Kauai. He and Benevides went searching for shells one morning along the beach when Burr tried to upend a boulder. The action ripped all the muscles out at his shoulder and they "became bunched up down near his elbow." A doctor "stapled" the muscle back to the shoulder. Ouch.

Give credit to Burr for continuing to film throughout that undoubtedly painful injury. Even with Perry himself, the truth comes out eventually. 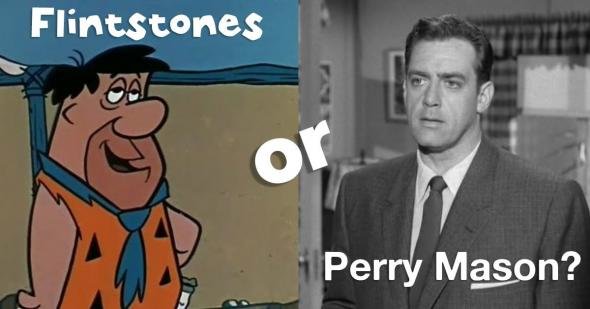 1960scartoons
Can you tell the difference between Perry Mason and The Flintstones? 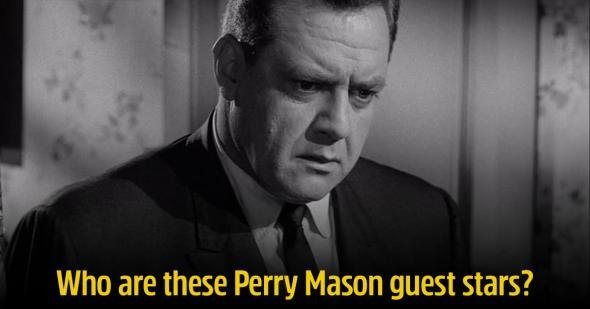 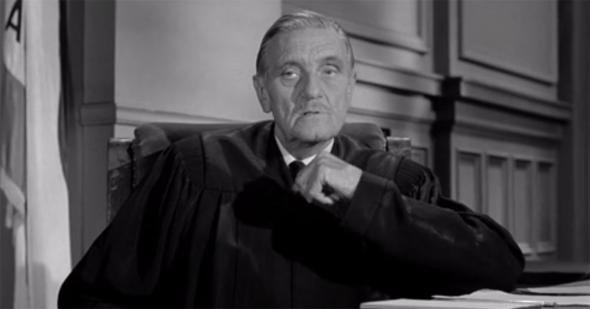 Did you know?
This familiar Perry Mason judge died during production
Are you sure you want to delete this comment?
Close

rckymtn4 11 months ago
How it went down Perry Mason-style. Doctor to Raymond Burr: "Why didn't you tell me that is what happened to your shoulder? Burr: "Well, it was embarrassing." Doctor: "Look, if I'm going to be your doctor, you have to tell me the whole truth."
Like Reply Delete

ncadams27 21 months ago
I’m sure the real reason for hiding the true story was that it would reveal his homosexuality (a career-killer at the time). A late fifties issue of Mad Magazine featured a Perry Mason parody. He was Perry Masonmint and the other regulars had similar funny names - except one who played the guest star, Harry Townes who is a real-life actor. The storyline is an absurd case where a man was shot in front of 65,000 fans at Yankee Stadium. One of the closing lines was “Perry Masonmint was even going to marry the witness Harry Townes so he couldn’t testify against him” Seems a bit absurd, but Harry Townes was also gay. He was outed by Mad in the fifties.
Like Reply Delete

JasonOliver 21 months ago
It would take a true Perry Mason to understand the twisted truth of Raymond Burr's private life. A tragic death of a wife. A tragic loss of a son. Embellished wartime stories. None of them true. Imagine the brass ones that an actor would have hiding a big secret in the public eye that could kill their career, then. Perry Mason would have Raymond Burr on the stand with a blank piece of paper saying, "What if I told you that on this document is..." Raymond Burr would break down sobbing, "I only wish I could have done it a million times!" Nah, Perry would never be that dark. LOL. Still a great show to watch just to guess who is going to suddenly be the killer.
Like (2) Reply Delete

Hilary JasonOliver 21 months ago
You are so right. Still love him, He owned the role.
Like (4) Reply Delete

Hilary 21 months ago
Raymond was so memorable as Perry Mason and I wonder if he could believe so many of us would still enjoy his work years later, but it is sad to have fabricated his life in so many ways. Especially since Perry always stressed getting to the truth!
Like (4) Reply Delete

Wiseguy 21 months ago
Those episodes (and indeed the entire 8th season) was never seen in the first almost 20 years of reruns until the 1980s when TBS got the rights to show the entire series.
Like (2) Reply Delete

Mac2Nite 21 months ago
Seems that Raymond Burr never could tell the truth.... he was always embellishing his stories with lies & fabrications, to include a dead son he never had, as well as his homosexuality [understandable, considering the times he lived in]. Sad, but pretty common for the times.
Like (1) Reply Delete

cperrynaples Mac2Nite 21 months ago
Yes, and he was arrested at a drag club and CBS made it go away! On the other hand, they fired William Talsman for allegedly being at a pot party!
Like Reply Delete

AgingDisgracefully 21 months ago
So he DIDN'T hurt it arm wrestling with Vivian Vance?
Like (2) Reply Delete

JasonOliver cperrynaples 21 months ago
William Frawley had the same war injury John Wayne did: wrestling a bottle of whiskey away from one hand by the other.
Like (1) Reply Delete

cperrynaples JasonOliver 21 months ago
Yep, he only got to be Fred Mertz when he promised Desi he would be sober!
Like Reply Delete

Hogansucks1 21 months ago
At least the truth came out- The helicopter story was probably some Yahoo’s idea to make Raymond out to be some kind of hero? ‘That’s Hollywood’. Good for you Raymond- stuck to the truth. Could have gotten a Hernia though, or worse. 😁
Like Reply Delete

WavSlave 22 months ago
"The ace attorney carries his left arm in a sling throughout the tale."

You were pretty close. It's his *right* arm in the sling, unless the photo used in the article was accidentally flipped. Nevertheless, it was an interesting read. Thanks.

Pacificsun WavSlave 22 months ago
Absence was said to be due to dental surgery. But I've also read where PM made up many stories about different incidents, so who knows.
Like (2) Reply Delete

cperrynaples Mac2Nite 21 months ago
Maybe he had a problem with a gerbel...LOL!
Like Reply Delete

jimmyvici 22 months ago
Interesting. I did notice and always wondered since. 🤔
Like Reply Delete