Where To Watch Shop Store Contact
Home / Stories / The Monkees originally referred to Mike Nesmith's character simply as ''Wool Hat''
did you know?

He actually wore the wool cap to his Monkees audition. 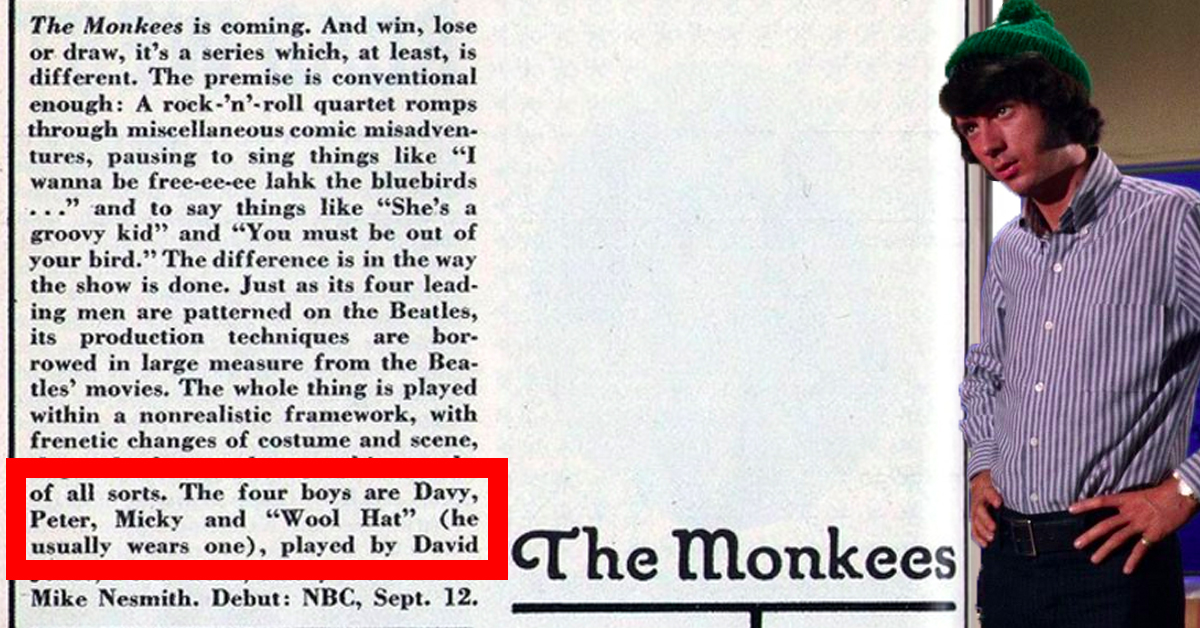 That's what The Monkees producers first dubbed Mike Nesmith and actually did use the nickname on air, intending to call the character that throughout the series run. You can even see it listed in the earliest Monkees promo materials, like this old TV Guide listing from 1966: 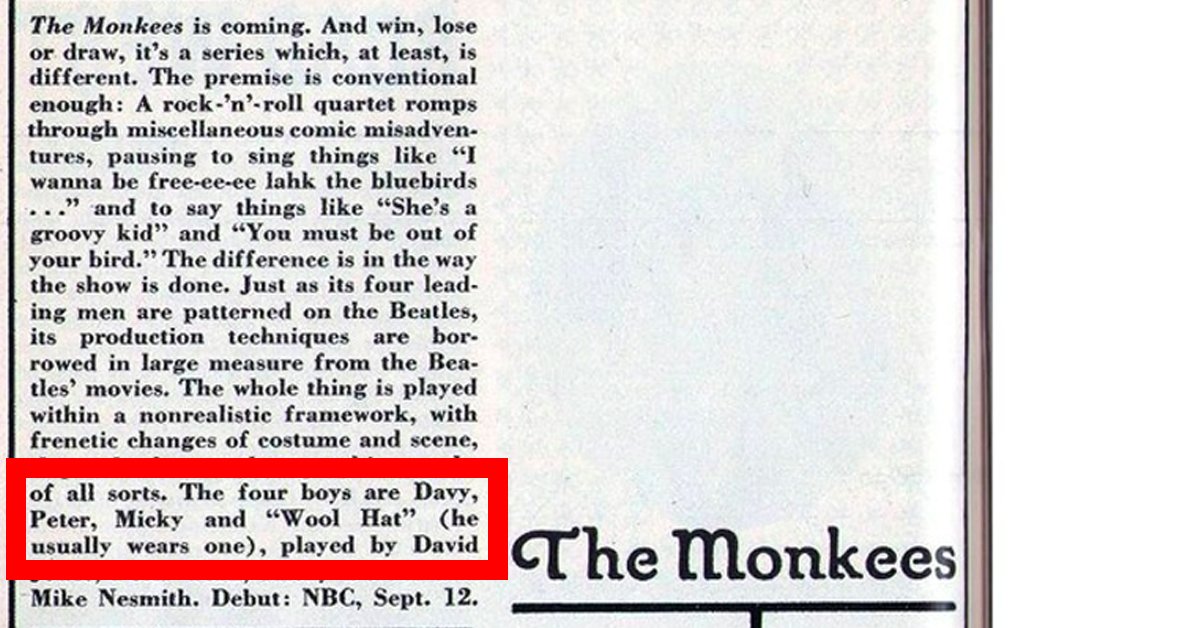 It also might surprise you to learn that the story behind Nesmith's green wool hat that he wore in many of The Monkees episodes is one of necessity. Despite being in sunny California, Nesmith had donned the wool cap to keep the hair out of his face while riding his motorcycle to his Monkees audition. He had no idea it would become such an integral part of his person from that point on.

In case you didn't realize, Nesmith's screen test ended up being so hilarious that when The Monkees pilot first didn't perform very well with audiences, the producers re-cut the episode and stuck Nesmith's and Jones' screen test in front of it. Once they re-aired it, suddenly everybody loved The Monkees. Call it the power of the wool hat, but producers latched onto the cap as Nesmith's calling card early on and tried to force the fan connection to be just as strong as theirs, by making it the character's name on the sitcom.

In the end, the reason we don't call Mike Nesmith Wool Hat is pretty straightforward, too. Nesmith didn't like being called Wool Hat (it's about the plainest name we've heard since Tom & Jerry called its star Tom Cat), so the producers dropped it, letting him be known by his real name Mike, not the hat he happened to wear on the first day he walked on set.

Wondering what happened to that famous wool hat? Nesmith hatched a pretty clever scheme to be rid of it for good. At a concert, the story goes that he tossed it out to a fan in the crowd. (Talk about the ultimate Monkeemania memorabilia!) The only way his plan would've been more perfect was if maybe he timed it out and tossed the hat away during a performance of the Monkees song "I Wanna Be Free." 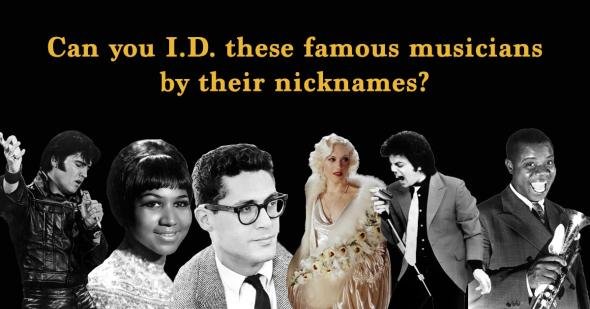 musictrivia
Can you I.D. these famous musicians by their nicknames?
Are you sure you want to delete this comment?
Close

Lucyneenah19701 45 months ago
I love Michael Nesmith's green wool hat! It's really cute! And Mike Nesmith looked cute in it!

cassidydiva 46 months ago
Did I read that they called him"David " Michael Nesmith?
Like Reply Delete

cperrynaples cassidydiva 46 months ago
No, they called Davy David and the red line cut the next line out! Fun Fact: David Bowie's real name IS David Jones!
Like Reply Delete

stephaniestavropoulos cperrynaples 46 months ago
Just as it's wrong to think that Mike's first name was David, so too is it wrong to think Mike's first name is Michael. If they wanted fans to know Mike by his real name, then they shouldn't have chosen to call him Mike; because that's not his real first name.
Here's another Fun Fact: Michael was the only 1 of the 4, to have answered the "MADNESS!" ad in Hollywood Variety.
Like Reply Delete

cperrynaples stephaniestavropoulos 46 months ago
Stephanie , I am right about David refering to Davy and NOT Michael, but your point is valid. Your Fun Fact is correct: Micky was known as a child actor, Davy came to the producers attention thru a guest spot on The Farmer's Daughter, and Peter was recommended by Stephen Stills after producers rejected him!
Like Reply Delete

stephaniestavropoulos cperrynaples 46 months ago
I was NOT referring to Mike being called Davy, I'm referring to the fact that they chose to not refer to Mike by his real first name, which is Robert. Just like a certain member of the Fab Four goes by his middle name instead of his first.
Like Reply Delete

stevepem cperrynaples 46 months ago
It was a little more complicated than that for Jones and Nesmith. Although Michael Nesmith did reportedly answer the infamous ad, he also was already previously signed with Colpix, the record label which (as Colgems) issued the Monkees records. Whether his association with Colpix had any influence on his selection as a Monkee is unknown. Meanwhile David Jones had also previously signed with Colpix, in fact a year before becoming a Monkee Jones released a single on that label. Jones had also previously signed with Screen Gems, the company that produced the Monkees TV show (both Colpix and Screen Gems were owned by Columbia Pictures). That's how he wound up on The Farmers Daughter, which was a Screen Gems production. Supposedly his Screen Gems contract gave him an automatic audition for The Monkees. That's not to say that his appearance on The Farmers Daughter earlier that year didn't also have an influence on his selection as a Monkee.
Like Reply Delete

cperrynaples stevepem 46 months ago
Didn't know about the Nesmith contract, but dead on about the Jones contact! He played the Artful Dodger in Oliver on Broadway! Micky starred in Circus Boy under his real name Mickey Braddock and we already know the Peter Tork story!
Like Reply Delete

stephaniestavropoulos cperrynaples 46 months ago
Braddock is not Micky's {who's name you misspelled,} real last name; it was a stage name. What made you think that was his real last name? His real last name is Dolenz.
his full birth name, {which can be heard in the movie HEAD. Scene: the one where Micky is in the desert with the coke machine. An echoy voice can be heard saying this twice: "Quite, isn't it, George Michael Dolenz."
Like Reply Delete