It involved robots, scheming millionaires and lots of basketball. 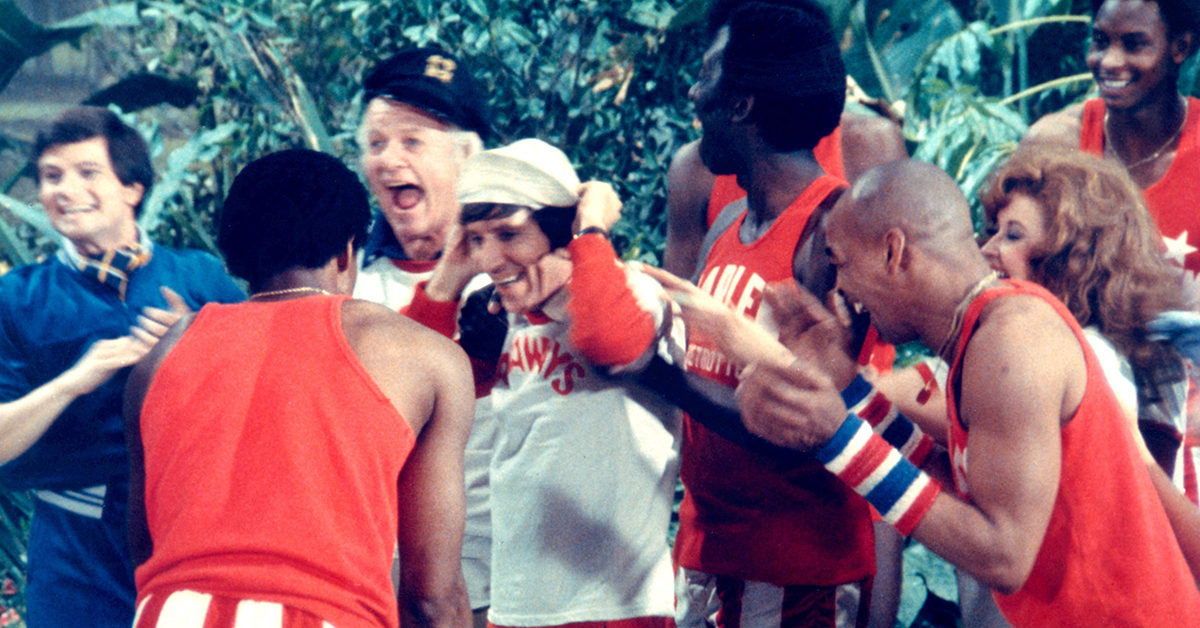 There's something incredibly timeless about Sherwood Schwartz's work. The simple plots and mild humor are easy for audiences to digest, giving the shows staying power.

It's no accident his first program, Gilligan's Island, has been in syndication since it went off the air 50 years ago.

A world away from the remote island of the castaways, the Harlem Globetrotters are also a prime example of staying power. The exhibition basketball team has been entertaining generations of families since it was founded in 1926.

But aside from that power, the two forms of entertainment have nothing in common. That is, unless we remember the made-for-TV movie The Harlem Globetrotters on Gilligan's Island.

The two worlds collided on May 15, 1981, for the primetime debut of the film, the third one to reunite (most of) the original cast of Gilligan's Island. (Tina Louise didn't sign on to play Ginger, and Jim Backus' Thurston Howell III was cut back due to the actor's ailing health.)

The premise was typical for the series, but far more complicated. Dare we say, it might have been the most absurd, too?

See Also: 21 things that happen on every episode of 'Gilligan's Island'

It starts with the Harlem Globetrotters crash landing in the Pacific Ocean, eventually finding their way to the island after fending off sharks with basketballs.

By this time, the castaways are running a successful vacation resort on the island. They welcome the basketball team to it, and for a moment, everything seems like it's going to be fine.

Of course, trouble brews not too far away. An incredibly wealthy businessman, J.J. Pierson, discovers there's an incredibly rare and powerful element that can only be found on the island.

In order to gain control of the island, Pierson sends a robot to wreck havoc on the castaways and their resort. One by one, the castaways give away their shares to Pierson after some maneuvering on his part. Pierson has Ginger sign a fake movie contract, he lowers Mary Ann's inhibitions through champagne, while he bullies poor Gilligan.

When Gilligan and the Skipper find out about the plot, they confront Pierson. The businessman tells them they can get back their shares, but only if the Harlem Globetrotters win a basketball game against his newly formed robot team, the New Invincibles.

See Also: The final appearances of your favorite TV characters are not always where you expect

The game does not start off well. The Globetrotters are getting crushed by the New Invincibles. By half time, the team is losing 95 to 3, and the Professor declares it's mathematically impossible to outplay the robot team.

But the Harlem Globetrotters have some tricks up their sleeves. Because the robots can't think, the Globetrotters are able to outmaneuver them by running around and performing tricks.

We won't spoil how the game ends, but an explosion is involved.

Sure, the made-for-TV movie sounds silly, but it's notable for being the last time the original cast reunited for an official film project. Although there were sporadic guest appearances on sitcoms throughout the 1980s and 1990s, nothing of this caliber manifested again.