Where To Watch Shop Store Contact
Home / Stories / The Flintstones were originally going to have a son instead of Pebbles
Did you know?1960scartoons

You can thank grape juice and dolls for the birth of Pebbles. 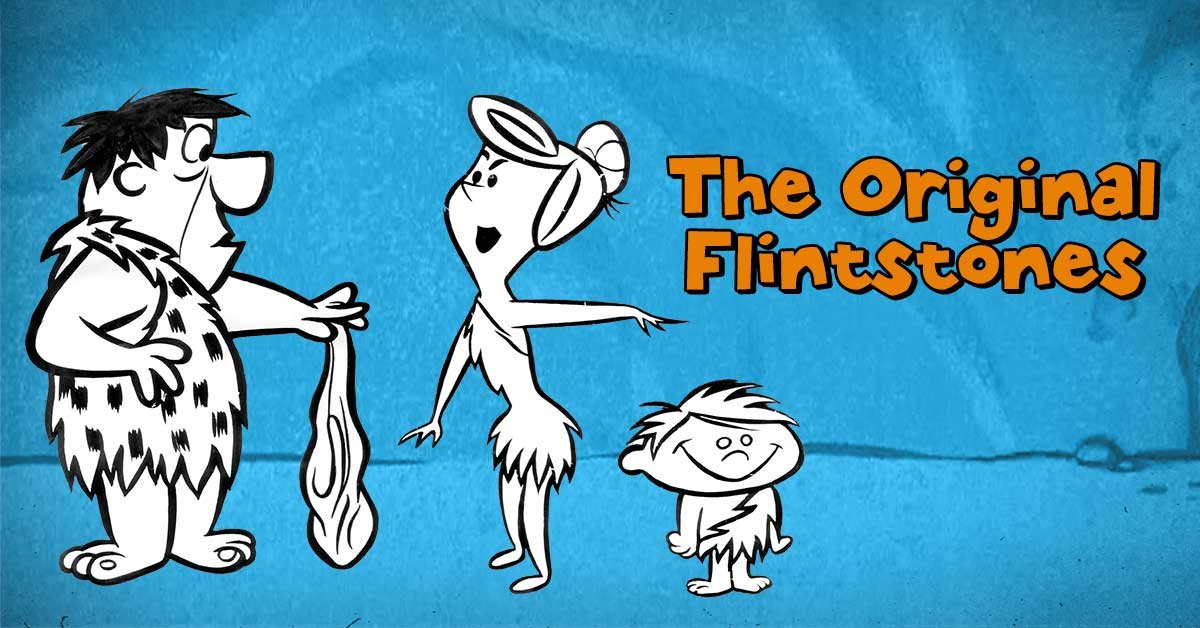 The artists at Hanna-Barbera could come up with some of the most brilliant concepts and characters in cartoon history. But sometimes you have to listen to the accountants and marketing folks.

In the early stages of development, the Flintstones were not the Flintstones you know. For starters, the family had a different surname. They were called the Flagstones, right up through the pilot episode.

In the concept stages, the artwork imaged Fred as a much cruder caveman, as seen in this colorful and fascinating painting that was displayed in an exhibit titled Hanna-Barbera: The Architects Of Saturday Morning at the Norman Rockwell Museum not too long ago. 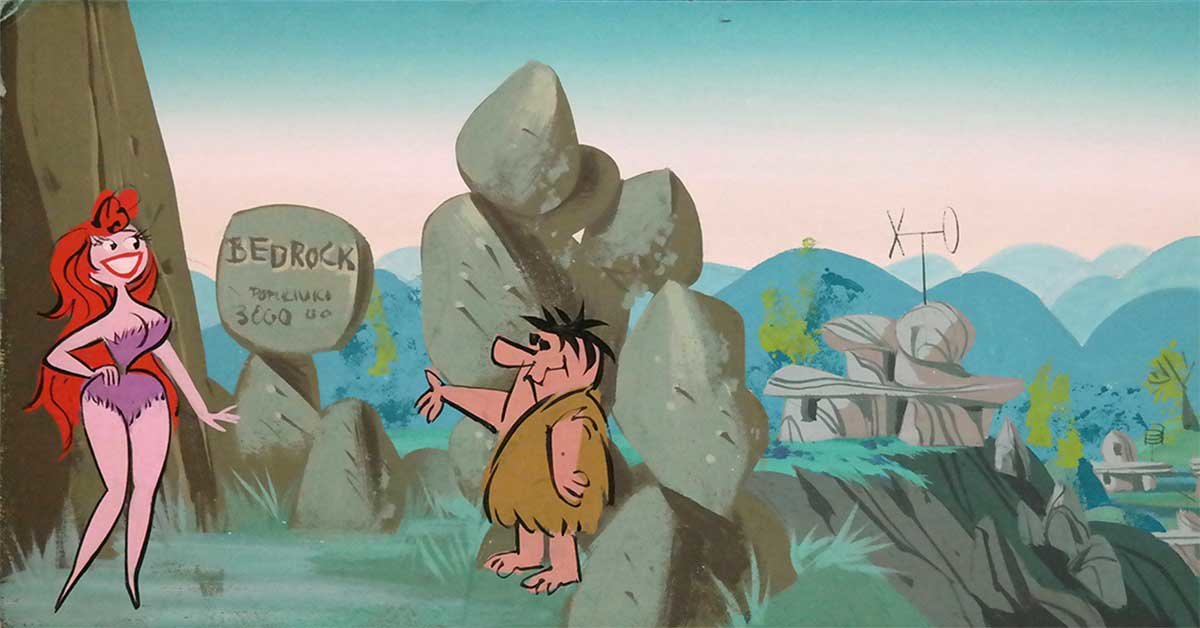 Even the population of Bedrock changed, from the 3,000 seen here to the final census of 2,500. And, no, that is not Wilma, more likely Ann-Margrock or some other Stone Age bombshell.

The characters continued to evolve, softening a bit while maintaining a more primitive appearance. Take the early Barney seen below, for example. 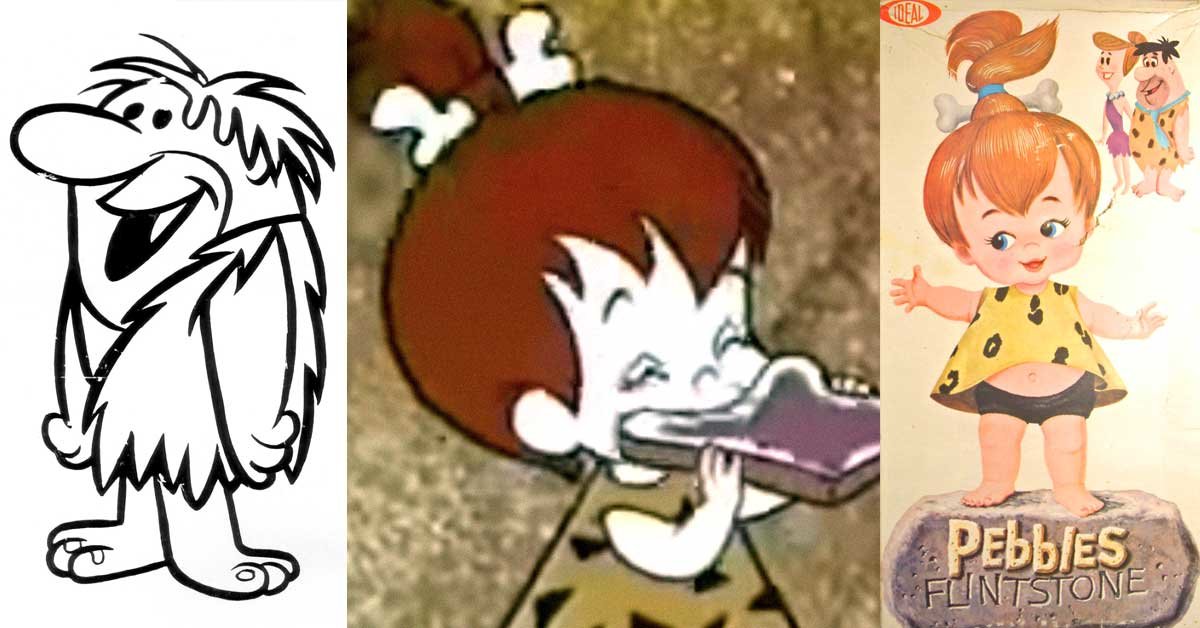 As many know, The Honeymooners inspired The Flintstones, but more specifically, the cartoon was a hybrid of the classic Jackie Gleason sitcom and popular newspaper comic strip.

In his memoir Lou Scheimer: Creating the Filmation Generation, Scheimer, one of the creators of the Filmation animation studio, remembers the moment the light bulb went off over somebody's head. He was working for Hanna-Barbera at the time.

"I was doing layouts in a little closet next to where the writers were," Scheimer recalled. "One day a writer named Charlie Shows came in…. He said, 'I've got a great idea! You take The Honeymooners, and you take Alley Oop, and you put them together, and you've got a great story!'"

Launched in 1932, Alley Oop revolved around a caveman named Alley Oop living in a prehistoric kingdom of Moo. He wore a loincloth and owned a pet dinosaur named Dinny. Sound a little familiar?

The Kramdens and Alley Oop may have served as inspiration for Fred and Wilma, but there is one notable thing missing from both The Honeymooners and Alley Oop — little kid characters. At its inception, The Flintstones was not intended for children. It was aired in primetime on ABC, scheduled just before 77 Sunset Strip, opposite competition like Route 66. There was briefly a Flintstones child in the development stages, a feral looking boy seen at the top of this post, but he was scrapped.

Oh, and just to reinforce the adult audience, the sponsor of the show was Winston Cigarettes. Which is how you ended up with artwork of Fred lighting a smoke like this. 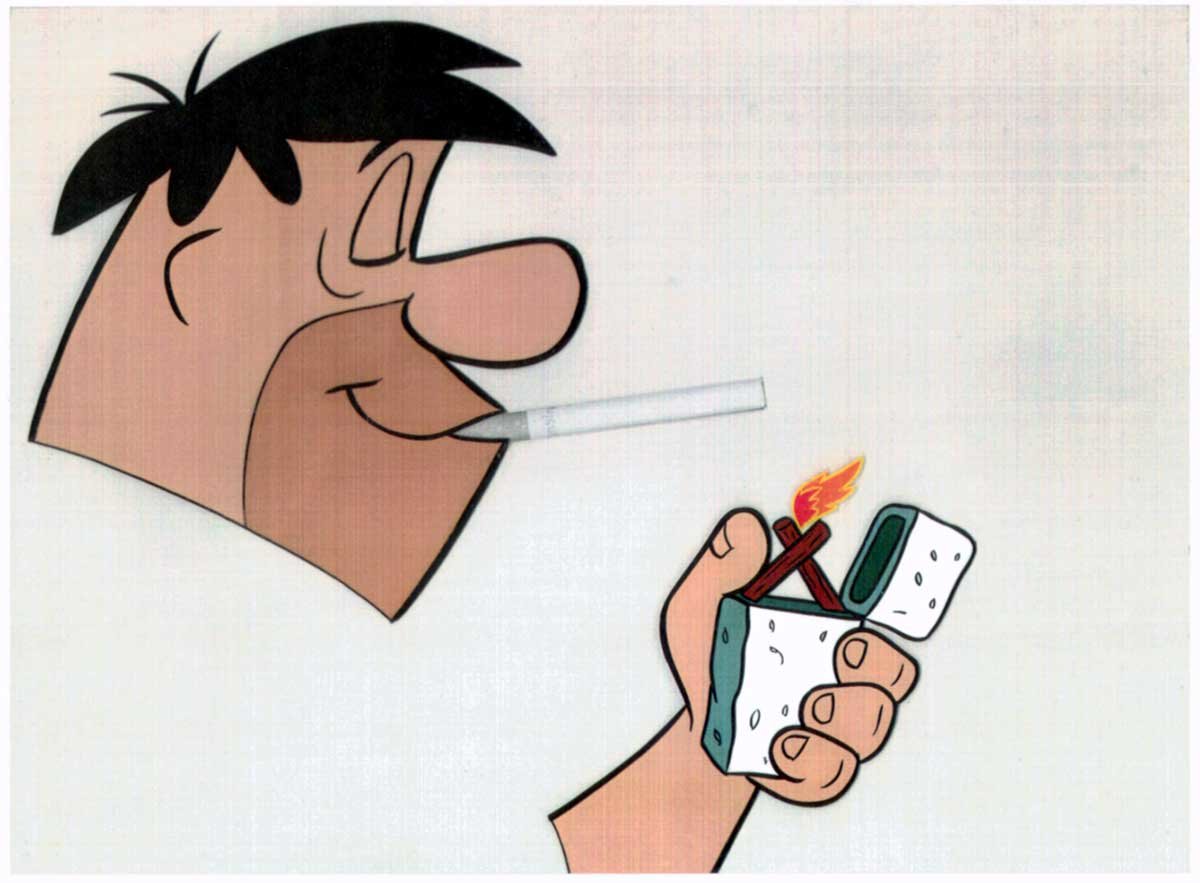 Fred and Barney promoted Winstons throughout the first two seasons in animated commercials that aired during the program. But at the start of the third season, Winston backed out and Welch's stepped in.

The fruit giant was looking to promote its grape juice and jelly. In the third season, The Flintstones took a decided turn towards a younger audience. Hanna-Barbera replaced the original instrumental theme song ("Rise and Shine") with the now-familiar sing-along "Meet the Flintstones." Additionally, Fred and Wilma, at last, welcomed a child, the little baby known as Pebbles. The Flintstones' kid arrived in early 1963. She could often be seen chowing on Welch's grape jelly in commercials, as you can see above.

The sponsorship went beyond promotional spots. References to their financial backers found their way into the scripts. In the episode "Moonlight and Maintenance," Pebbles asks about breakfast, to which Wilma replies, "Of course, we'll have grape juice!"

But let's back up a moment. Because "Pebbles," as we mentioned, was originally going to be a blond boy. What caused the gender swap? The toy market.

The writers and creators were set to introduce a young Flintstones male — until Ideal Toys pointed out that they would sell a lot more merchandise if they made the baby a girl. Baby girl dolls sell. Little boy dolls did not in 1963. You can see the original Pebbles doll packaging above.

So, through all the twists and turns of development, the Flintstones family unit was born. The only thing missing? A young Rubble friend for Pebbles, but that would wait for another season…

ClemCarpenter 6 months ago
Of course, Pebbles & Bam Bam would grow up, get married and make the Flintstones and Rubbles proud grandparents.....
Like Reply Delete

teire 35 months ago
I remember the jelly came in jars with the characters etched into/inked onto them. Then you repurposed the empty jars as drinking glasses.
Like (8) Reply Delete

Lacey teire 35 months ago
My youngest memory of my grandmother is that she had a set of these. I would love to visit her because I got juice in those glasses.
Like (3) Reply Delete 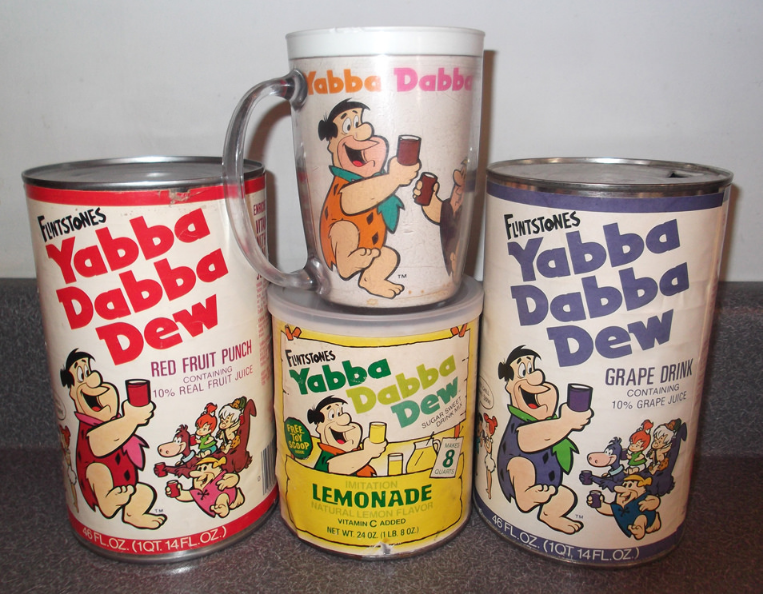 SalIanni RobCertSDSCascap 35 months ago
I'll pass on that. I like Flintstones Vitamins instead. The article mentioned "Alley Oop", the comic strip caveman that helped to inspire the show. "Alley Oop" was also a popular song that was #1 on the charts in 1960 -- the same year that "The Flintstones" premiered. So that could be where the inspiration came from. I think it would even have made a great theme song for the first season instead of that awful "Rise and Shine" which was wisely replaced by "Meet The Flintstones" in Season 2. I can just picture Fred getting in his car and driving off to work while in the background you hear "Look at that caveman go!!" It works for me! Fred sure was hip, wasn't he?
Like (2) Reply Delete

Lacey SalIanni 35 months ago
I was just thinking of that song. I'll head over to youtube and see if it is there.

RobCertSDSCascap SalIanni 35 months ago
He sure was.
Like (1) Reply Delete