Where To Watch Shop Store Contact
Home / Stories / Otis Campbell might've appeared only once in Mayberry if not for Hal Smith
did you know?

Tip your hat to the man behind Mayberry's town drunk. 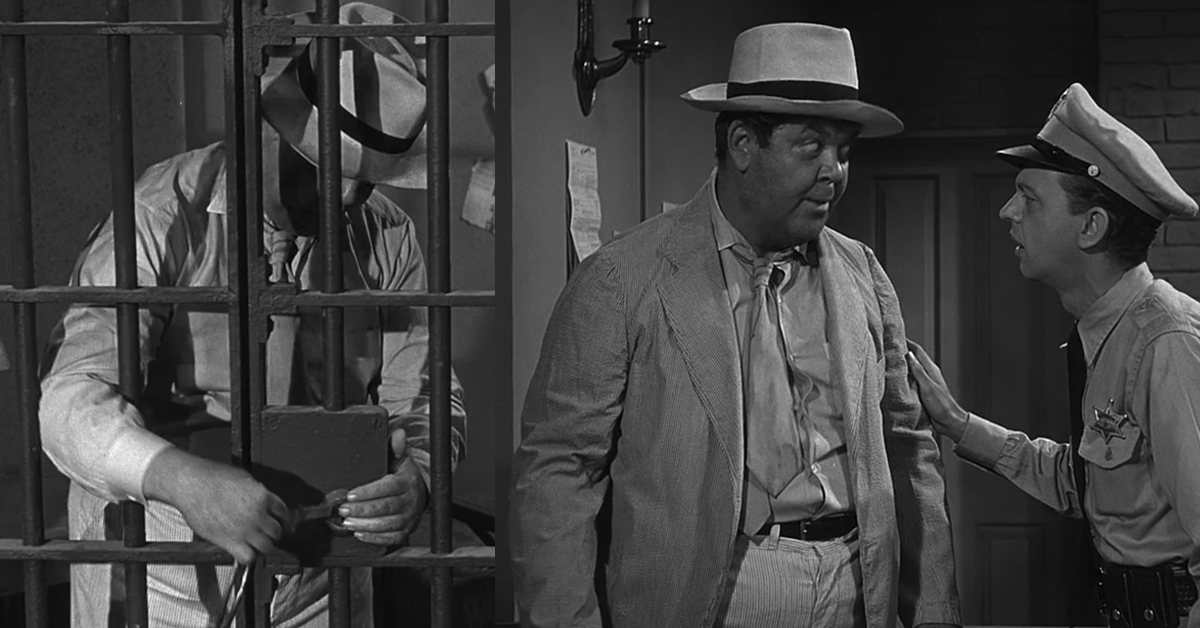 The state police came to Mayberry the first time we met Otis Campbell on The Andy Griffith Show, but it wasn't to disturb the peace of the sleepy town jail's most frequent inmate.

Instead, there's a statewide manhunt that's come to Andy's town, and when the sheriff heads straight to his desk to provide extra resources for the outside police force, he's got serious matters on his mind. That's why it's extra-funny to see the sheriff open the door to the jail, only to be reprimanded by his only prisoner that he's late. 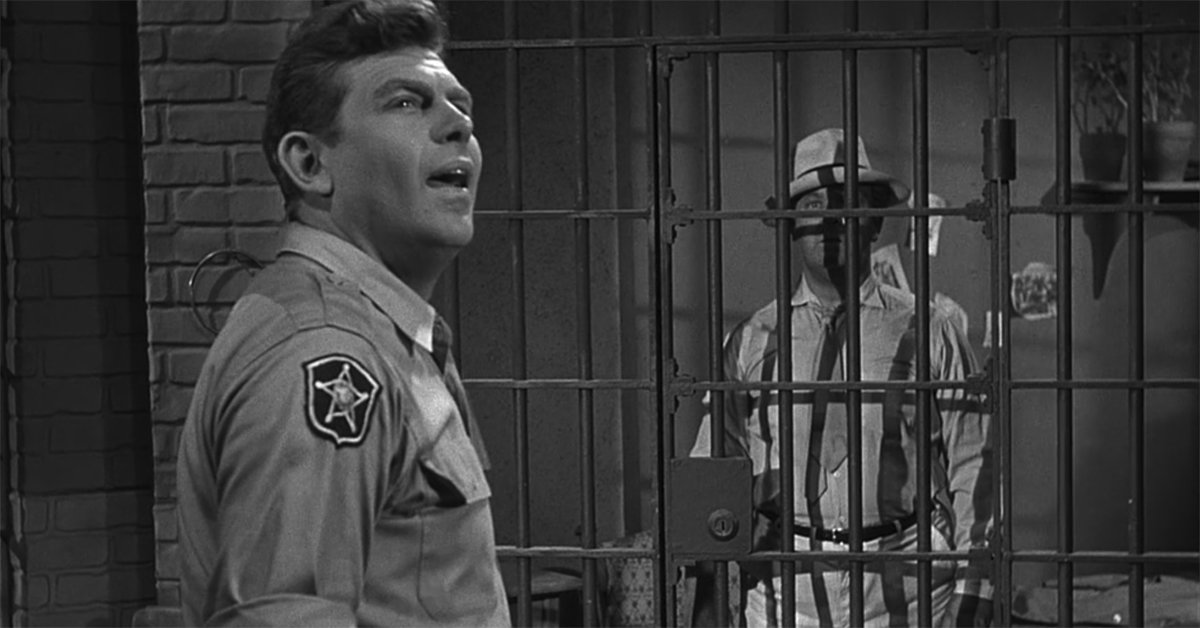 "'Bout time you got here, sheriff," Otis Campbell says in the episode. Sheriff Andy stops what he's doing and takes a long look at the clock, then replies, "Yeah, your 24 hours is about up. You can go on home, Otis." What follows is a classic scene that makes any Andy Griffith fan chuckle: Otis pulls the key off the wall from within the cell and lets himself out.

"The Manhunt" may have technically introduced audiences to Otis Campbell by name, but the character of the town drunk is actually one of the few seen in the pilot episode of The Andy Griffith Show (which aired on The Danny Thomas Show) that made it into the spin-off series. In "Danny Meets Andy Griffith," Mayberry's town drunk is named Will Hoople and played by Frank Cady, but the concept is all Otis Campbell.

Cady laid the groundwork for Hal Smith to complete the character on the show, but according to Andy and Don: The Making of a Friendship and a Classic American TV Show, there was never actually any plan to have the town drunk be a recurring character on The Andy Griffith Show. The original idea was to simply install the town drunk in the jail cell on "The Manhunt," and that led Sheldon Leonard and Aaron Ruben to cast a one-off character called Otis Campbell for the episode.

Enter Hal Smith. Smith had entertained audiences doing character work on The Adventures of Ozzie and Harriet, including playing a drunk, so he was a natural choice to audition. What they couldn't predict was how much charisma Smith would lend to the part. According to the book, co-creator Aaron Ruben watched Smith's audition and told the actor, “Hal, this might develop into quite a part for you.”

Develop into quite a part, it did. Smith appeared in 32 episodes of The Andy Griffith Show, more times than the actor appeared on any other non-cartoon TV show.

Barney Fife actor Don Knotts pointed to Smith's excellence as a storyteller as the source of Otis Campell's success on the show, "Hal Smith played Otis, the town drunk who would come in and lock himself in jail. … It was a very funny character and Hal was very good at it. Hal Smith, he did a lot of voices on radio and he did a lot of voiceover work, animation and the sort. Very busy actor. A great storyteller; Hal was a wonderful storyteller. I never saw Hal when he didn’t have a new story to tell. I don’t know where he got them all, funny guy, very enjoyable.”

Knotts knows firsthand how hard it is to play a drunk in Mayberry, too. It happened for the first time in the episode "Alcohol and Old Lace," where funny enough, Otis Campbell plays sober the whole show. Assistant director Bruce Bilson told the Archive of American Television that when they were trying to rehearse the scenes, there was just something off about Don Knotts' performance.

Bilson said, "There was an episode where Don was gonna play a drunk, I think it was with Otis, I don’t remember. And we rehearsed the scene, and it wasn’t working and it wasn’t working. And nobody could quite put their finger on what was wrong.” Finally, Bilson remembered director Bob Sweeney figured it out: Knotts was playing himself drunk, instead of Barney Fife drunk. As soon as Sweeney gave Knotts the new direction, the scene played out perfectly.

In his interview, The Andy Griffith Show writer Harvey Bullock has the answer why: "They were all geniuses. They all fit, and they fit so well with everybody else, and nobody was crowding their lines.” 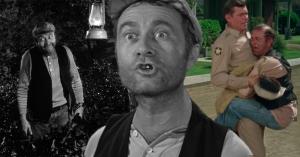 Case in point: "The Manhunt." After Otis lets himself out of the Mayberry jail for the first time, Barney Fife becomes distraught. He's not worried about Otis roaming free, though. He's more concerned the visiting state police won't be impressed by an empty jail cell.

"Andy, you can't let Otis go," Barney protested in the episode. Andy responds, "I have to! His sentence is up." Barney's eyes bug out as he says, "But he's the only prisoner we've got!"

Off-camera, we hear Otis give a casual line that somehow perfectly sums up just how often we'd see the character on the show: "See ya later, Andy."

"Try not to drink it all, Otis," Andy says, knowing full well what Otis' next step will be once he's free and expecting it will find him back with Mayberry's finest sooner or later.

SherylATedder 38 months ago
Start getting paid every month online from home more than $15k just by doing very simple and easy job from home. Last month i have earned $17954 from this online job just by giving this 2 hrs a day using my laptop. I am now a good online earner. Get this job you guys also and start earning money online right now by follow details here............===>>> www.jobscycle.com 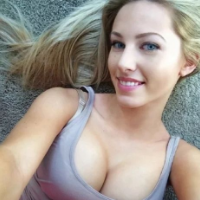 Google is now paying $17000 to $22000 per month for working online from home. I have joined this job 2 months ago and i have earned $20544 in my first month from this job. I can say my life is changed-completely for the better! Cheeck it out what i do....

boopinbama 38 months ago
aunt bea played on that episode,but not as aunt bea
Like (1) Reply Delete

RedSamRackham boopinbama 10 months ago
* That was pilot with Frank Cady as the town drunk!
Like Reply Delete