The sitcom star also recorded his take on tunes from 'Andy Griffith' and more. 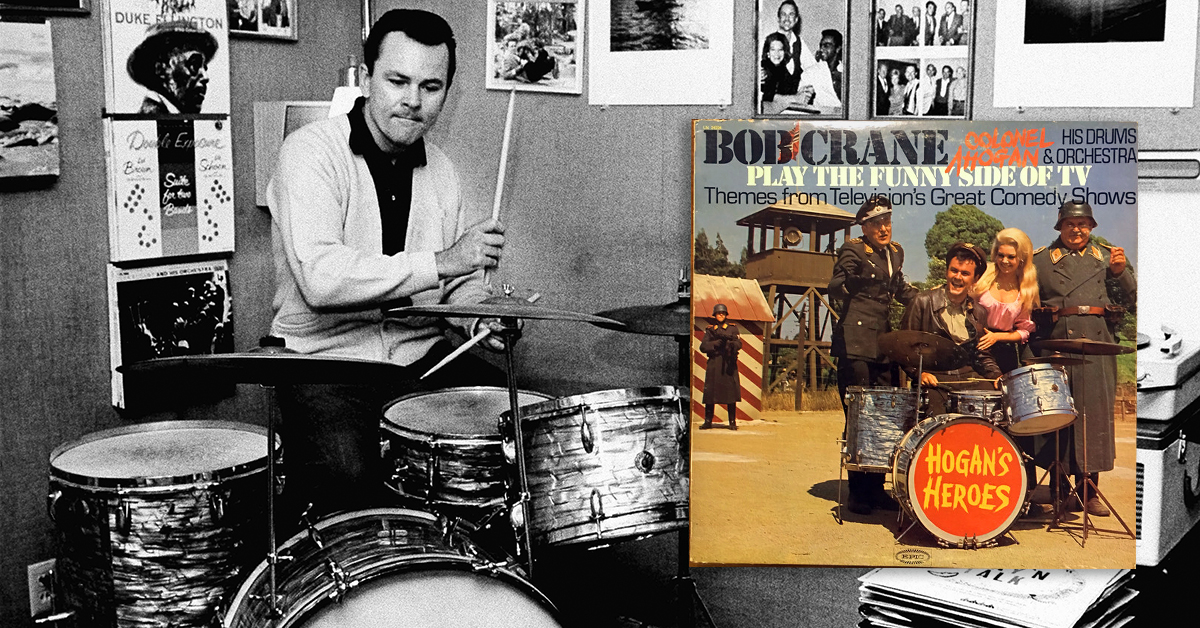 In 1939, Bob Crane was an 11-year-old boy from Connecticut visiting the World's Fair in New York City. There the suburban kid caught a performance by Gene Krupa, the drummer and big band leader who turned his percussion into a focal point of jazz. Young Crane was mesmerized, and immediately set out to become a drummer himself.

In school, Crane led drum and bugle parades, marching bands and jazz combos. After school and military service, Crane entered the world of radio, working his way from New England to Los Angeles, where he eventually landed a gig hosting a hot morning show.

On his radio show, Crane at last got the chance to play drums with his hero, Gene Krupa.

Of course, Crane made the leap from radio to television, charming audiences on The Donna Reed Show before headlining the unlikely hit Hogan's Heroes. Throughout his Hollywood career, Crane's drum kit followed the actor wherever he went. He kept a drum set in his dressing room on Hogan's Heroes. After the sitcom ended, and Crane hit the touring dinner theater circuit, his drums traveled with him.

So it should come as no surprise that Crane recorded a jazzy album at the peak of Hogan's Heroes popularity. Bob Crane, His Drums And Orchestra Play The Funny Side Of TV: Themes From Television's Great Comedy Shows hit record shops in 1966. The LP featured punchy cover versions of several successful TV show theme songs, from My Three Sons to The Andy Griffith Show. Yes, naturally, the theme from Hogan's Heroes kicked off Side A.

"At the recording sessions, Bob was always 'on.' Jokes flew thick, fast and funny. The most talented studio musicians were his audience, and Bob had them enjoying every session," producer Stu Phillips wrote on the back of the jacket.

One of the cuts was the theme from The Green Hornet, the popular superhero series that had premiered on ABC that same year. It was conceived as serious, grittier alternative to Batman. For its opening credits, trumpet ace Al Hirt blew through a brassy version of Rimsky-Korsakov "Flight of the Bumblebee" (close enough to a hornet). However, in Crane's hands, the number became just as camp as Batman.

For starters, Crane added lyrics. Well, if you can count repeatedly singing "The Gree-e-e-n Hornet" as lyrics. "Ba-do-ba-do," he added, perhaps as a response to Batman's "Na-na-na-na-na-na." To cap it off, Crane, presumably imitating the Green Hornet, asks in a lispy voice at the end, "Are you silly savages calling me?" It's rather bizarre. Take a listen.

In his radio days, Crane was deemed "The Man of a Thousand Voices" for his impersonation skills. At the end of his Get Smart theme cover, he slips into a convincing Don Adam impression. As kooky as the endeavor gets, at least the drumming is lively and crisp.

NostalgiaMusic
Did these stars perform at the Super Bowl halftime show back in the day?
Are you sure you want to delete this comment?
Close

WNS03264 2 months ago
I wonder what Verner Klemperer (Col. Klink) made of Bob Crane's music? Herr Klemperer are was a Orchestra conductor of renown and a talented musician in his own right.
Like Reply Delete