He told Beaver a witch lived in Mayfield, wore a costume in court and pulled Halloween pranks in North Fork. 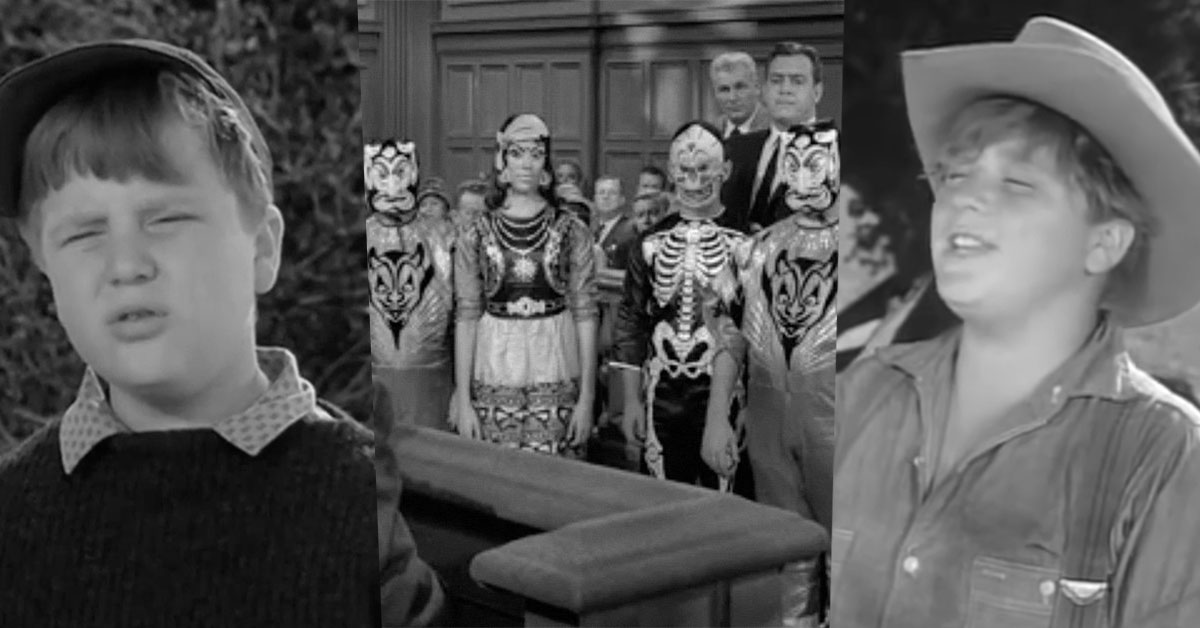 Robert “Rusty” Stevens will always be remembered as Beaver’s pal Larry Mondello in Leave it to Beaver. After getting discovered selling newspapers on a street corner, Stevens appeared in 67 episodes during Beaver’s first four seasons.

While Larry had many memorable moments, one fan-favorite episode is the spooky delight “The Haunted House.” Early in the story, as Larry and Beaver walk by the old Cooper place, Larry postulates “I bet we got the only school in the world with a haunted house on the way home from it.” Beaver wonders who would live in such a house and Larry determines they would have to be a witch.

Of course, this isn’t the last the boys see of the place. Beaver gets a job walking a neighbor’s dog for a whopping 50 cents a day. He’s excited by this new prospect until he realizes the woman offering the gig lives in the creepy Cooper house! Convinced she must be a witch, Beaver is afraid to go by himself, but neither Wally nor Larry want to go with him and he has to face the challenge alone. 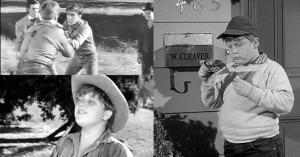 Did you know?
Jerry Mathers searched for decades to reunite with Larry Mondello

It’s a fun episode about not judging a book by its cover that includes a few eerie elements not normally seen in this wholesome family sitcom.

It would also be the first of three spooky or Halloween-centric episodes that Rusty Stevens played a part in.

A few years after “The Haunted House,” Stevens showed up in the Perry Mason episode “The Case of the Dodging Domino.” This courtroom story may not sound like a Halloween episode but the holiday has an integral role in the plot. Stevens plays a young trick-or-treater who appears in court costume and all.

But even after these two roles, Rusty Stevens wasn’t done with All Hallows’ Eve. A year after his Perry Mason appearance, he played a rabble-rousing teenager in The Rifleman episode “Hostages to Fortune.” The story starts with Mark and two friends riding around on Halloween night wearing sacks on their heads pretending to be ghosts. They cause a ruckus riding through cattle herds, sending the animals running every which way.

The teenage pranks provide the perfect cover for cattle rustlers who hit herds the very same night. Stevens plays Melvin, an instigator of the Halloween night shenanigans riding with Mark. When Melvin bullies a new kid in town named Percy, Mark and Melvin get in a fistfight.

Stevens’ role in The Rifleman was his last appearance as a child actor. He left the entertainment industry behind when his family moved from southern California to Pennsylvania. He did come back to television twenty years later, though, recruited by the Beaver himself, Jerry Mathers. Stevens reprised his role as Larry Mondello in the 1983 TV movie “Still the Beaver” and the subsequent series The New Leave it to Beaver. 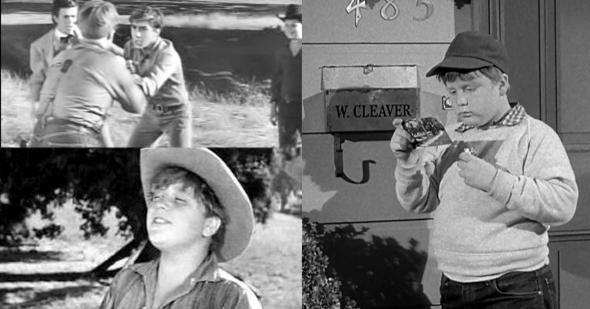 Did you know?
Jerry Mathers searched for decades to reunite with Larry Mondello 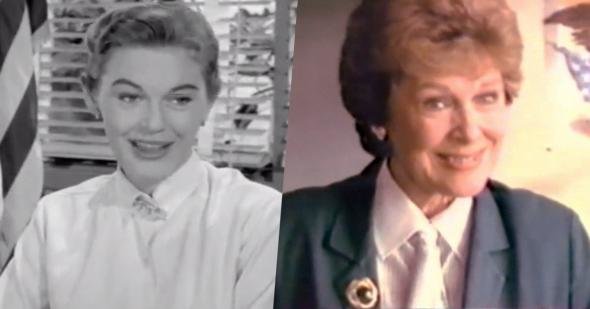 Did you know?
Diane Brewster's final role once again made her Beaver's favorite teacher 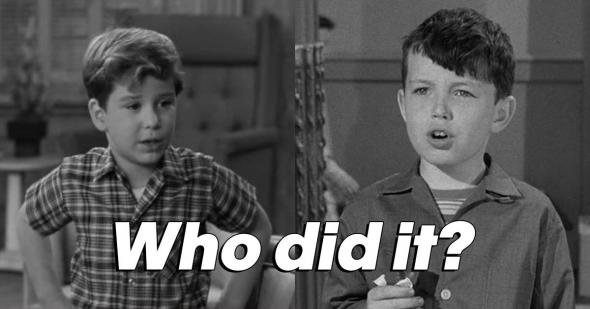 1960s
Who did it: Beaver Cleaver or Ritchie Petrie?
Are you sure you want to delete this comment?
Close

larry52 5 months ago
Rusty was in the rifleman had a fight with Mark rusty was making fun of marks friend name.
Like Reply Delete

SalIanni 6 months ago
The only non-Beaver episode that I remember seeing Rusty Stevens in was on "My Three Sons". It was called "Bub Gets A Job". Bub finds a job in a clothing store and Rusty, as a character names Cletus Bleeker, plays a very difficult customer who eventually gets Bub to blow his top and get fired.
Like (1) Reply Delete

Catman bagandwallyfan52 2 months ago
From the wikipedia article, here is a picture of Skip Young : 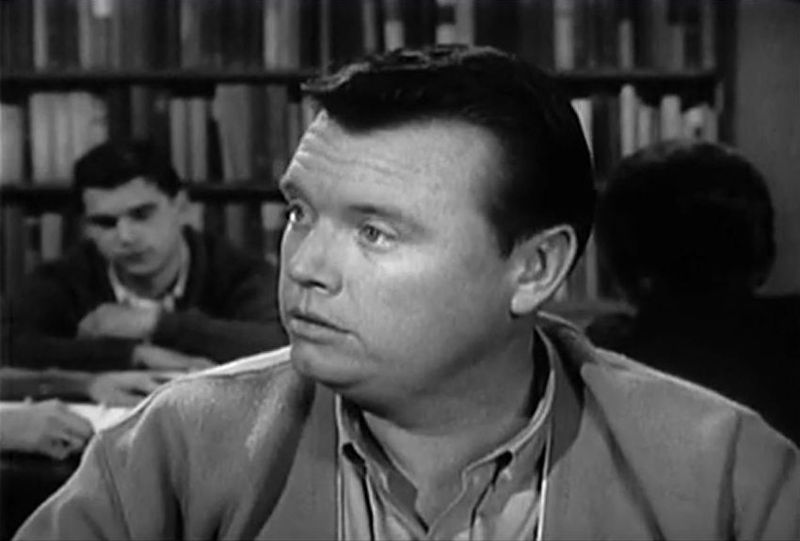 Catman bagandwallyfan52 2 months ago
And from a Happy Days fansite, Bag Zomborski: 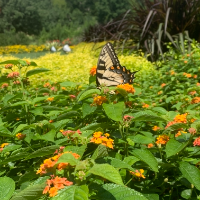 robyni23 6 months ago
The Haunted House episode was one of my favorites. My favorite scenes are when Beaver told Wally he got a job walking a witches' dog. Then Wally going behind Ward's back asking him if he could talk to him in the kitchen to explain to Ward why Beaver was afraid. Then Ward had to tell Miss Cooper that Beaver is afraid of her because he thinks she's a witch. June kept saying, "he's very imaginative".
Like (1) Reply Delete

MichaelEasterwood 6 months ago
Recurring character ,but a star?no
Like Reply Delete

LoveMETV22 MichaelEasterwood 6 months ago
At 67 episodes he was more a regular character. He was a favorite character for some, but not for all.
Like (1) Reply Delete

UPTOWNGIRL 6 months ago
Isn't it odd that LITB never had a Christmas episode? They weren't afraid to talk about God or Sunday School (and Hugh Beaumont was an ordained Methodist minister); so why was there not one family Christmas episode? Almost the same with The Andy Griffith Show...but at least they did one.
Like Reply Delete

LarryLeGros UPTOWNGIRL 6 months ago
In the fourth episode, season one on LITB, "The Haircut", there is reference to a Christmas play but not Christmas itself. That's as close to Christmas as the show got. One would have thought that LITB would have had a yearly Christmas show.
Like (2) Reply Delete

Larry 6 months ago
I love MeTV, like many, many others. Thanks for all the great family memories.
Like (3) Reply Delete

MrsPhilHarris 6 months ago
I found a fun site the other day and it listed a bunch of Hallowe’een shows/episodes I had not seen.

LoveMETV22 MrsPhilHarris 6 months ago
Interesting page. Love the vintage advertisements. Thanks for the share.
Like Reply Delete

MrsPhilHarris LoveMETV22 6 months ago
Yeah I love the ads.
Like (1) Reply Delete

MrsPhilHarris 6 months ago
Larry Mondello was my fav character hands down. His character was a riot. The show’s not the same without him. Gilbert is fun though.
Like (4) Reply Delete

LoveMETV22 6 months ago
Love all the characters on LITB. Does anyone have a favorite character and or phrase from the show❓❓
Like (1) Reply Delete
Load previous comments

Pacificsun Peter_Falk_Fan 6 months ago
I wish there were as many stories written about LITB as TAGs and MASH (and at this point, MONK).

Like, I'd like to know the relationship between JC and KO. Was she instrumental in encouraging him to have a profession in life. Seems like he wanted to do good work. They were in a lot of scenes together. Did she teach him acting or give him tips how they could interact, having more fun with their characters. She was dead-on convincing in how much that boy annoyed her.
Like Reply Delete

Pacificsun Pacificsun 6 months ago
I meant Barbara Billingsley of course.

Don't have a thousand people writing to me about the mistake, I admit it.
Like Reply Delete

bagandwallyfan52 LoveMETV22 6 months ago
Eddie Haskell called Wally
Sam and Gertrude on different episodes of LITB.
Eddie Haskell (Ken Osmond) and Lumpy Rutherford (Frank Bank)
Were terrific Practical Jokers on LITB .
Two of Wally's friends
Chester Anderson Buddy Hart and Tooey Brown
Tiger Fafara NEVER got
Into any trouble like
Eddie Haskell and Lumpy
Rutherford did.
Judy Hensler (Jeri Weil)
Disappeared from LITB in
1960 and was replaced by
Penny Woods (Karen Sue Trent)and Chester Anderson and Tooey Brown
Also vanished from LITB
In 1960. Harry Henderson (Keith Taylor) might have
Been a replacement for
Larry Mondello.
Wally Eddie and Lumpy
Also had a new friend whose name was Bill Scott (David Kent) but Bill Scott
Vanished after approximately 5 episodes.
Bill Scott was in.the roller
Coaster episode of LITB.
Judy Hensler and Penny Woods were in One Episode ONLY about
Beaver acting like Ivanhoe.
Gus the fireman (Burt Must in)was also a great character.
I wonder if Ken Osmond
AKA Eddie Haskell received
The most fan mail.
Eddie Haskell might have
Been the most popular
Character on LITB.
Leave It To Eddie would
Have been a good spinoff
Show for Eddie Haskell.
Also I think that Penny Woods was a more friendly
Character than Judy Hensler.
I liked the episode where
Bengie(Joey Scott) thought
That Larry Mondello turned
Beaver (Jerry Mathers) into
A rock.
Like (1) Reply Delete

wyo307pink LoveMETV22 6 months ago
I absolutely loved the “Heart of a Tree” Poem that Beaver’s class had to read in school. I even had the poem printed over a picture I took while landing in a plane, which was all trees as seen from the sky. If I recite it out loud, I cry. It’s very powerful 🎄🌲🌴🏝🌳
Like Reply Delete

Runeshaper 6 months ago
Seems like Halloween was meant to play a part in the life of Rusty Stevens!
Like (1) Reply Delete

harlow1313 6 months ago
The show was never quite the same with out Larry Mondello. "The Bloody Five" were a cool club, but I'm joining "The Fiends."
Like (6) Reply Delete

Pacificsun harlow1313 6 months ago
Yeah he was as natural as JM and TD.
Like Reply Delete

LoveMETV22 6 months ago
Love "The Haunted House" episode of LITB that was on this morning. Rusty Stevens was a great character on the show as well as the other characters. Lots of funny phrases the different characters used over the life of the series.
Like (5) Reply Delete

Pacificsun LoveMETV22 6 months ago
Does anyone remember the episode where Lumpy and friend wear the masks and ring Beaver's doorbell, really scaring he and the friend who stayed overnight. It was almost a "Halloween" episode.
Like (2) Reply Delete

MrsPhilHarris Pacificsun 6 months ago
It was on today. Beaver’s Long Night. Lumpy and Bill are wearing masks whilst sitting in Lumpy’s car whilst waiting for Wally who is still at school for some sporting event. Beaver and Gilbert think Lumppy and Bill are strangers casing the joint. They don’t ring the door bell though.
Like (5) Reply Delete