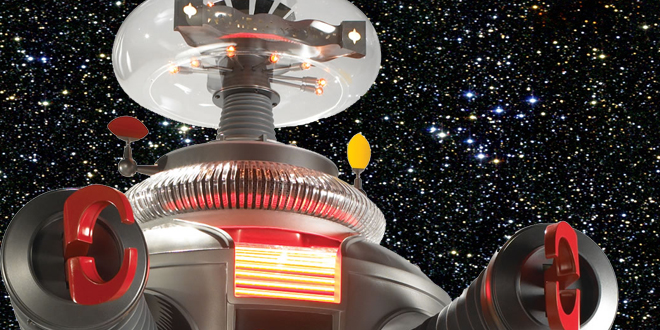 Half a century ago, Bob May was rehearsing on a studio lot. He was working as a stunt double for Red Buttons. Irwin Allen spotted the physically gifted performer and recognized him from some earlier bit roles. Allen was developing a new series, Lost in Space, and told May that if he could fit in the costume, the role of the Robot was his. May fit inside the fiberglass suit.

Today would have been May's 76th birthday. The performer died six years ago. Because of modern technology, from CGI to remote controlled puppets, its easy to forget that there was a man inside Robot B-9. Though he did not provide the voice — "Danger, Will Robinson!" — May used his stage background to give the machine, well, life.

Lost in Space premiered 50 years ago, on September 15, 1965. Here are some thing you might not know about the Robot.

• The costume reportedly cost around $70,000 — about half a million in today's money.

• The costume weighed approximately 200 pounds. Initially, in early episodes, May would wriggle inside a full head-to-tracks B-9 costume. That proved to be too unwieldy, so in most cases, May would only wear the upper half as the camera shot him from the waist up.

• The robot was designed by Robert Kinoshita, who also designed the iconic Robby the Robot and Tobor.

• Another initial design element of the costume that was eventually changed: May would have to trigger the lights on the Robot's torso by hitting a button with his head inside the suit. The button was eventually moved down by the claw.
• The torso was made of fiberglass, the legs of rubber, the arms of latex and the claws of metal.

• May could see out of the ring of silver vents around Robot's neck. The makeup department would paint his face black to hide it.

• May was a smoker. During one break, May hanging on the set, puffing a cigarette inside the suit. The cast and crew returned and thought the costume was on fire. May assured them he was fine. The prop department installed an ashtray inside the costume.

• The Robot was recycled. After Lost in Space, the costume was modified with a plastic dome, painted white, and used as P.O.P.S. on Hanna-Barbera's live action Saturday morning show Mystery Island.

Job0t 8 months ago
Nothing "robot" about it. It screams "human-inside" it's a cool suit, but everything about it breaks the immersion for me. The acrto even stretches exactly like humans do... wtf? Someone gets paid for that acting 1 level thinking? Yikes.
Like Reply Delete