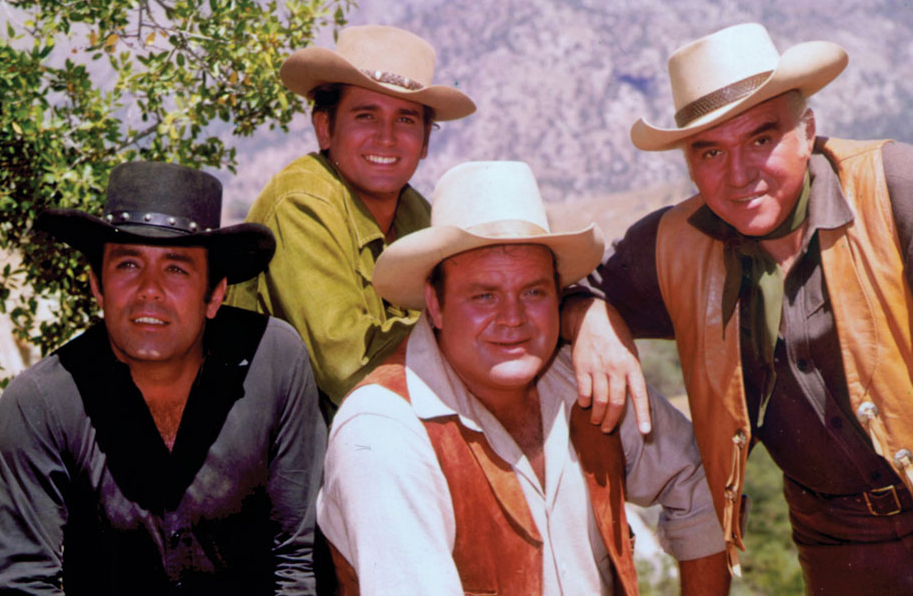 The western was one of the most popular TV genres of the late ‘50s and early ‘60s. Over-saturation was one of the factors in its ultimate demise, but there were a few shows that developed feverish enough following that they were able to stand up to shifting public tastes. Bonanza was one of those shows, riding tall in the saddle from 1959 to this day, January 16, 1973. That’s a pretty impressive ride over the rocky terrain of television. Forty one years on since its last show, Bonanza is a TV classic worthy of another appreciative look.
The scene: The Ponderosa ranch, outside of Virginia City, Nevada. A sprawling tract of land surrounds the well-appointed house; apparently, Ben Cartwright (Lorne Greene) made a tidy little packet from a large deposit of silver (ka-ching!). Inside, Cartwright is raising his three grown sons – Adam (Pernell Roberts), Eric or “Hoss” (Dan Blocker) and Joseph or “Little Joe” (Michael Landon). Each of the boys was born of a different and now, sadly, deceased wife. Ben Cartwright, it seems, had better luck in the silver department than he did in romance.
That Bonanza was able to enjoy such a lengthy ride long after the novelty of the western had come and gone owed no small amount to the sturdy reliability of the likable cast, but also because the show rose above the shoot-em-up elements that permeated the standard western series. They were able to deal with adult themes (racism, romance) but were able to weave in humorous elements (mainly with Hoss and Little Joe) to keep the young ‘uns interested.
Pernell Roberts grew dissatisfied with the show and left after the 1965 season, despite being urged by Greene to stick around and hold out for a sizable wage increase, as the other principals had done. Roberts couldn’t be persuaded and the Adam character was written out of the show with the explanation that he had moved to Australia. They didn’t kill him off (listening, Downton Abbey?), and left the door open to Roberts appearing in future episodes, something that he sadly never did. He later claimed that he regretted his decision to leave and that the way his departure was painted in the press at the time (sour grapes) left a bad taste in the mouths of the fans, and from which Roberts felt his career might not have ever fully recovered – though he did stage a successful second act as the star of Trapper John, M.D.
Dan Blocker passed away in 1972 after complications from gallbladder surgery, and the show was moved from its anchoring time slot in the NBC Sunday night lineup to Tuesday nights, where it was up against the new comedy hit, Maude. The writing was on the wall for Bonanza, and the new wave of biting social satires meant that the sun was setting at long last on the westerns. They never even had a chance to prepare a farewell episode, sadly. But 14 seasons and 430 episodes (all of them in color – a first for a TV western) in three different decades is a good long ride. Take that ride again, Monday through Saturday at 2PM/1C on Me-TV.