America’s #1 Classic Television Network
Find your local MeTV station
Where to watch
See when your favorite shows are on
See schedule
Personalize MeTV.com to follow your favorite shows
Free sign-up
Shop your favorite shows in the MeTV Store
Shop Now
Home / Stories / Bob Denver was incredibly brave when this lion got loose on Gilligan's Island
did you know?1960s

Gilligan came "within inches" of "being crushed" by a 400-pound lion.

The king of the jungle coasted onto Gilligan's Island a couple times through the series run, but the most memorable lion in the show's history is most certainly the star of "Feed the Kitty."

On the show, he's known as Leo the Lion, but in the real world, his name was Zamba, and he was so famous in Hollywood, his biography claims that he's "The Greatest Lion That Ever Lived." There was hardly a hit show in the Sixties that didn't invite Zamba on set.

Zamba was likely so popular because as menacing as he appeared, he was actually a more cuddly creature, due to his specific training.

The lion was trained from a four-month-old cub to the 400-pound beast we saw on Gilligan's Island by exotic animal trainer Ralph Helfer. Helfer used a different kind of training tactic than others in that day, inspiring good behavior by encouraging the lion with love, known as "affection training." The man and his lion would over time and many TV shows, from The Twilight Zone to Lost in Space, deepen their bond and reinforce the trust between animal and trainer.

It was 11 years into the large cat's career when Gilligan's Island called in the affection-driven Zamba.

And that's why it was all the more shocking to learn that when the lion accidentally got loose on set of Gilligan's Island, according to series creator Sherwood Schwartz in his book Inside Gilligan's Island: From Creation to Syndication, "Bob Denver had come within inches, literally, of being crushed beneath a 400-pound lion."

Schwartz breaks down exactly what happened:

"Assume you’re an actor in a scene with a lion. The lion is supposed to remain on the bed while you tiptoe to the door and exit. Assume further that you have rehearsed that scene several times, and each time the lion has remained peacefully on the bed while you make your exit. Now assume that the cameras are rolling, and as you start to exit, the lion, instead of remaining peacefully on the bed, leaps for you as you start toward the door."

It's quite possibly the scariest moment in the history of Gilligan's Island. Schwartz continued in the book, "The only thing that saved Bob’s life is the fact that the bed wasn’t bolted to the floor. As a result, when the lion made his leap toward Bob, the lion’s back legs pushed the bed backwards, removing the force from his jump. Because of this, the lion’s leap fell short of Bob by about two feet.”

Luckily, Denver escaped unscathed, because, Schwartz wrote, "The trainer moved in instantly, and grabbed the lion. Bob wasn’t even scratched."

More than that, Bob Denver was unfazed – and ready for the cameras to roll again, saying, "Okay, one more time. And keep the bed loose, in case he jumps again.” 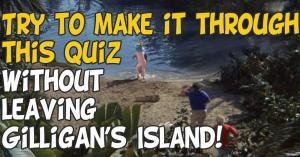 Try to make it through this quiz without leaving Gilligan's Island

Schwartz remarks on Denver's incredible bravery by asking, "Assume this happened to you. How long would it take to get you back on the bed with the lion again? Would never be long enough?" He commends not just Denver, but the entire cast of the show, for being so prepared to do whatever the show required, "Everybody in the cast was dedicated to the show, above and beyond the call of duty.”

And as for Denver and Zamba as costars, it only took them one more take to nail the scene. Perhaps the real reason Denver was so comfortable with the lion (despite what Russell Johnson described to Archive of American Television as a "lunge") was because the two had worked together five years prior.

The exact same lion was the "cool cat" Maynard befriended on The Many Loves of Dobie Gillis episode from 1961, "What's My Lion?"

Either way, we can all agree that Denver keeping his cool through this unexpectedly tense scene just further proves that he, too, is one of the Sixties' coolest cats.