''M.D.'' stands for something else in the deputy's world.

Before things got "verrrry interesting" for Arte Johnson when he joined Rowan & Martin's Laugh-In as a regular performer, TV audiences had seen the actor on a variety of hit shows.

He gave us drama in 1961 – as a strapped-for-cash used car salesman who punches out his boss in The Twilight Zone – and laughs in 1966 – as the marketing man whose outlandish ideas push Rob Petrie not to run for office on The Dick Van Dyke Show. And between both of those standout roles, he made a very memorable cameo on The Andy Griffith Show.

For the second season episode "Andy and Barney in the Big City," director Bob Sweeney guided the sheriff and deputy outside Mayberry's borders, not for a day trip but for business. When Andy Taylor and Barney Fife check into a hotel in Raleigh, the pair is chasing down a suspected jewel thief they suspect is staying right there in the same inn.

It was an episode that not only gave us a rare glimpse of the lawmen outside of their element, but also showed how Barney's sense of pride always inflated even more when he was far from home and free to boast. It's this aspect of Don Knotts' hilarious character that comes out about five minutes into the episode when Knotts and Griffith come face to face with Johnson's character, the hotel clerk.

Standing behind the counter and peering out from thick-rimmed glasses, Johnson at 5-foot-four greets Mayberry's towering sheriff first, registering him for his room with no remark or incident. With Johnson acting so polite and dry, you might suspect the exchange will be without humor, a forgettable flicker in The Andy Griffith Show's otherwise nonstop parade of charming characters, but then it's Barney's turn to register. The exchange between the hit series' leading comedic actor and Rowan & Martin's future showstopper does not disappoint. (Watch the video above to see how it plays out.)

The laughs begin when Barney stops signing and Johnson's clerk addresses him as Mr. Fife, only to glance down and correct himself, "Excuse me, Dr. Fife." This raises Andy's eyebrow. "Dr. Fife?" he asks his friend, and wide-eyed with certainty, Johnson answers, reading from Barney's card, "Bernard Fife, M.D." As Barney squirms, Andy squawks, "M.D.!"

"That's how I always sign," Barney insists, "Bernard Fife, M.D." Then he clarifies, "Mayberry Deputy." The scene ends with a ring of the bell from Johnson, as Barney scurries off and Andy beams after his deputy.

The second season of The Andy Griffith Show was really when the show began allowing itself to wander outside of Mayberry, showing Barney trying too hard to impress Andy's fishing buddies at the Raleigh Esquire Club in "The Clubmen" and seeing Barney get a job offer to become sheriff of a nearby town in "Sheriff Barney."

But "Andy and Barney in the Big City" was the first time we really got to watch how the comedic duo translate outside their hometown, and Barney's fibbing on his hotel registration only served to prove the deputy's the same old character no matter what town he's dropped into. With Johnson there to add subtle comedy to the scene as an extra straight man, it's a moment in TV history that's fun for any Sixties fan to revisit. 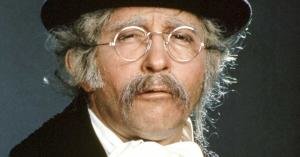 After appearing on The Andy Griffith Show, Johnson appeared on McHale's Navy, Bewitched and The Donna Reed Show, all before Rowan & Martin's Laugh-In would make him a household name. But while his TV characters always managed to find the spotlight, no matter how small, Rowan & Martin's executive producer George Schlatter said it was his highly unusual but neverthekess hilarious audition that got Johnson cast on the legendary variety show.

In an interview with the Archive of American Television, Schlatter remembered casting the first ever Laugh-In special, saying, "Nobody really gave the show any chance at all. It was cheap and there were no guest stars and it was all new, and Dan (Rowan) and Dick (Martin) were funny." He said casting was an unusual process, with Ruth Buzzi landing her spot by sending him a truly bizarre photo and Johnson joining up after showing up one day at the executive producer's home. Schlatter said he appeared in costume as a "Jewish Easter Bunny" outside his door, "laying eggs on my front yard for my daughter."

Thinking back, Schlatter chuckled along with all of us remembering an indisputable fact: "Arte Johnson was funny."