Flip through channels of the past and check out early television clickers that look like ray guns and complex calculators. 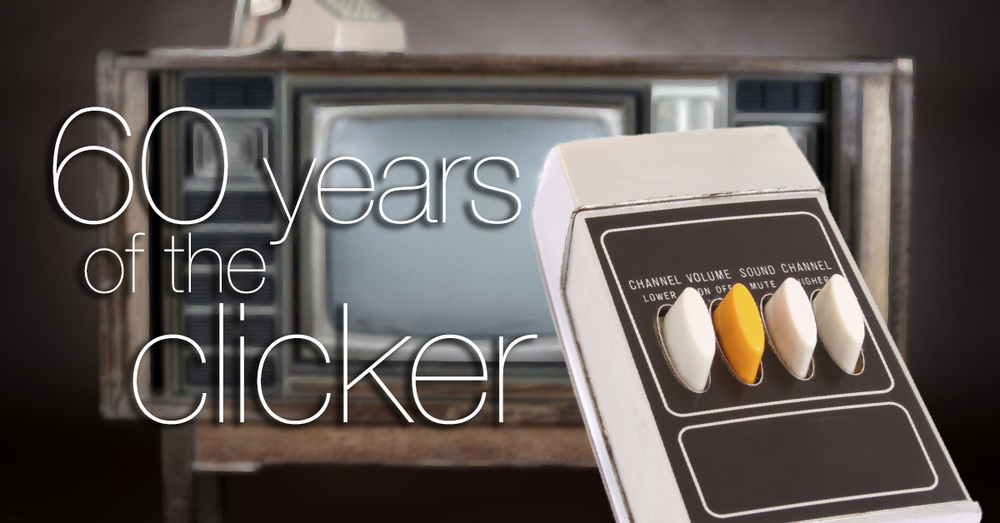 In today's modern world, we can set our television to record from across the globe via a smartphone app. We hardly have to lift a finger from the comfort of our couch to control any home electronic device. We take for granted that people once had to get up to change the channel.

Yet the remote control is nearly as old as the television itself. Those who could afford it have been flipping channels from their seats since 1950. The first wireless remote control was invented in Chicago by Eugene Polley for Zenith and introduced in 1955. The gizmo, dubbed the Flash-Matic, looked like a ray gun from the future. Since then, the handheld devices have used everything from light, sound and radio waves to command our television sets. 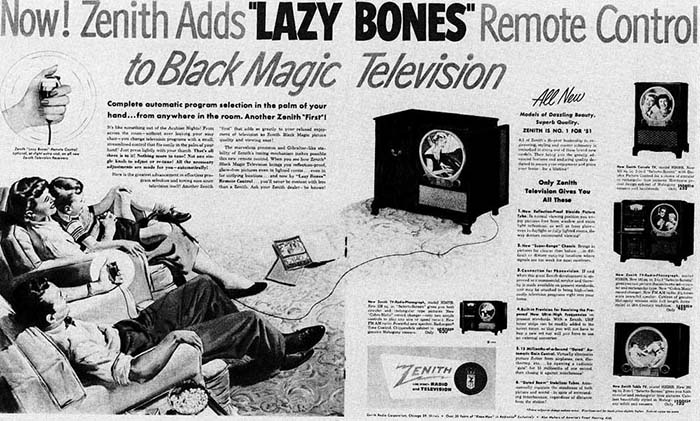 Before we get to wireless, let's go back to the beginning. Zenith made no, er, bones about it by naming its first remote "Lazy Bones." The device worked like a detonator, with a single button mashed with the thumb.

One of the earliest remotes was invented to shut off sound during commercial breaks. The novelty cost $2.98, far less than more sophisticated controllers. Ironically, the "Blab-Off" was dreamt up by an advertising executive. According to a blog post by the inventor's daughter, the creator made up the alias "Bob Grant" to secretly market his product.

Image source: Man on the Lam 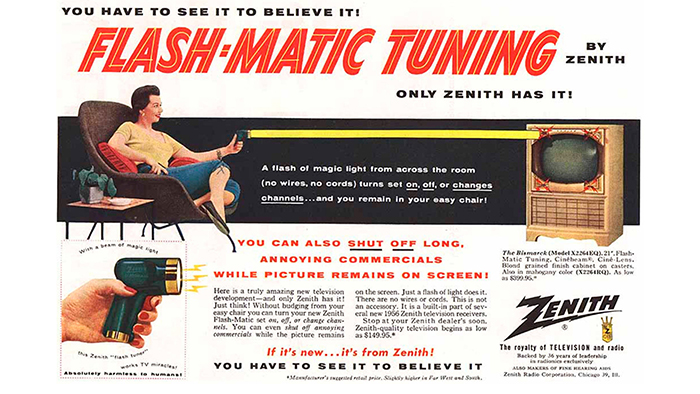 Here we get to the first wireless remote, which utilized light. In essence, it was a flashlight of sorts, hence the name, that triggered the set via four panels around the screen. Just one problem — light bulbs and sunlight could also trigger the television. 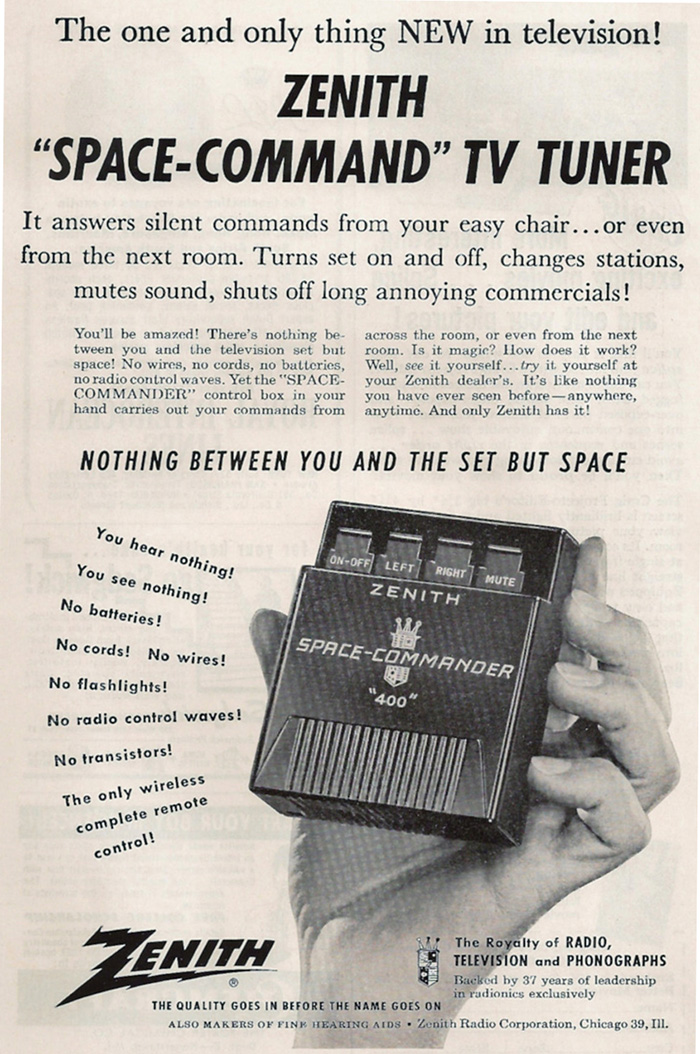 To be honest, when we say 60 years of the "clicker" in the top image, we are being a bit disingenuous, as the nickname likely did not come around until 1956 with the advent of Zenith's Space Command device. Yep, when you pressed the buttons, it made a clicking noise. These remotes operated on ultrasonic sound, which was a definitely step up from the light-emitting devices. However, some other sounds around the house could trigger your TV, and the remote probably drove dogs nuts. 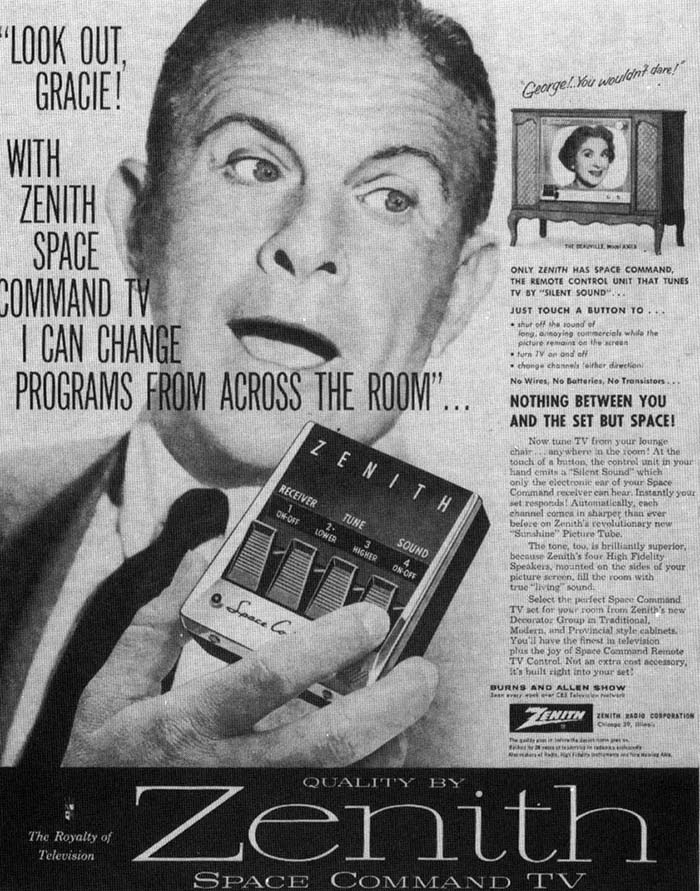 George Burns promoted the sleeker design of the Space Command (which was actually labeled "Space Commander 400"). 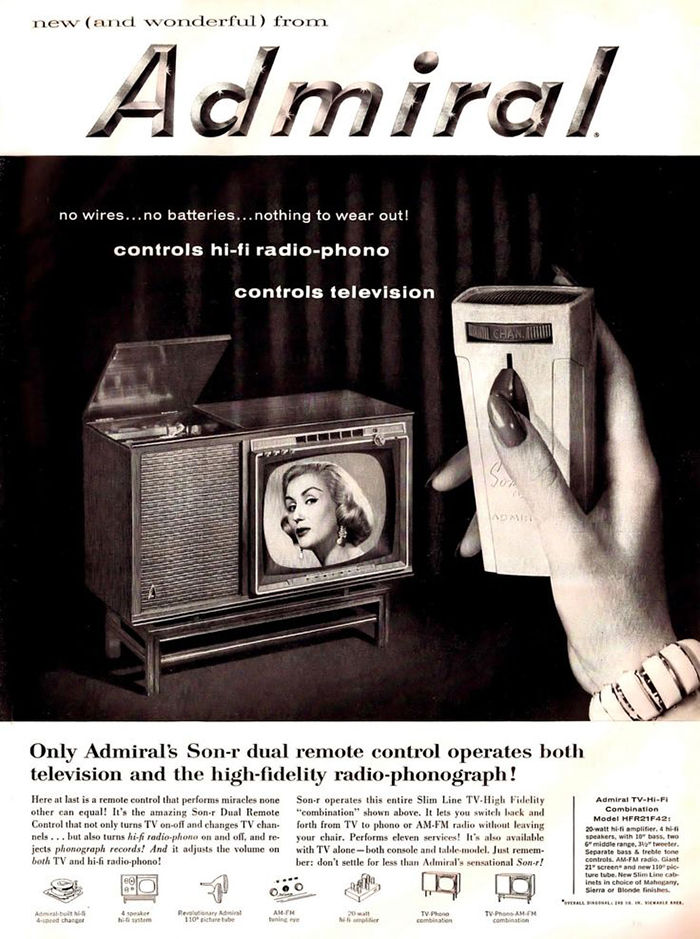 Admiral was another Chicago-based electronics company that helped pioneer the remote. This nifty iteration could also manipulate the phonograph in the entertainment console. Admiral also offered the "World's first portable television with remote control" in 1959, for the cost of $159.95.

Image source: Room with No View 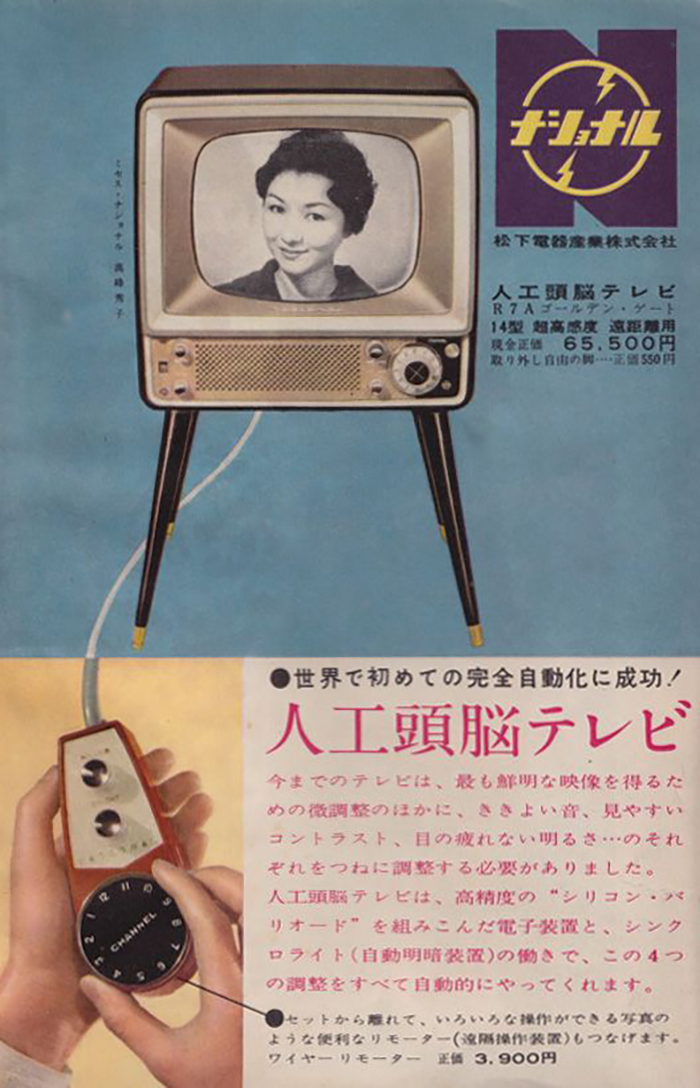 This early Japanese model remained tethered to the set and operated via a dial. 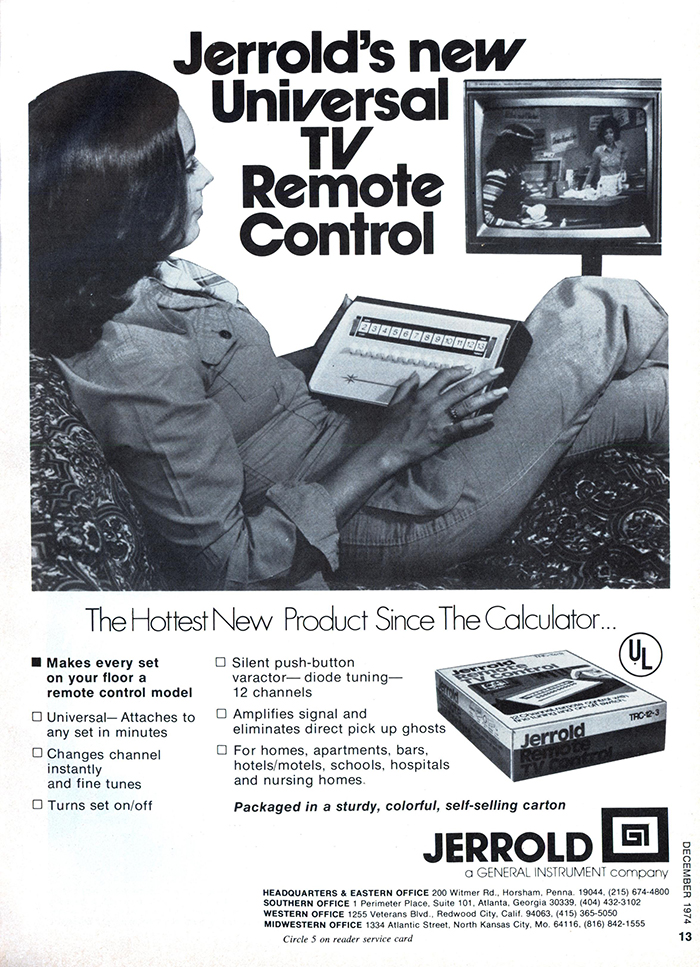 Ah, so that's what "laptop" meant in 1974. Jerrold, a Philadelphia company, manufactured this large remote.  The universal remote was dubbed "The Hottest New Product Since The Calculator." No wonder it looked like a child's electronic abacus. Cumbersome, yes, but a cool design. 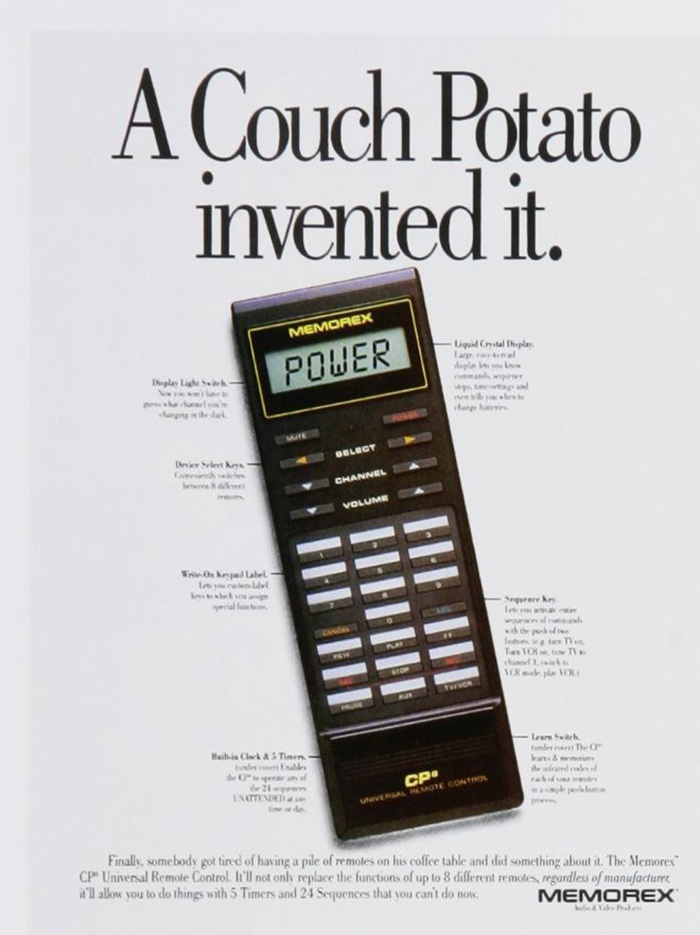 Universal remotes slimmed down over the next decade (thanks in large part to a certain Apple legend — but more on that below). These certainly looked more akin to calculators, and cost about as much as a complex TI-81 graphic calculator. It retailed at $120. 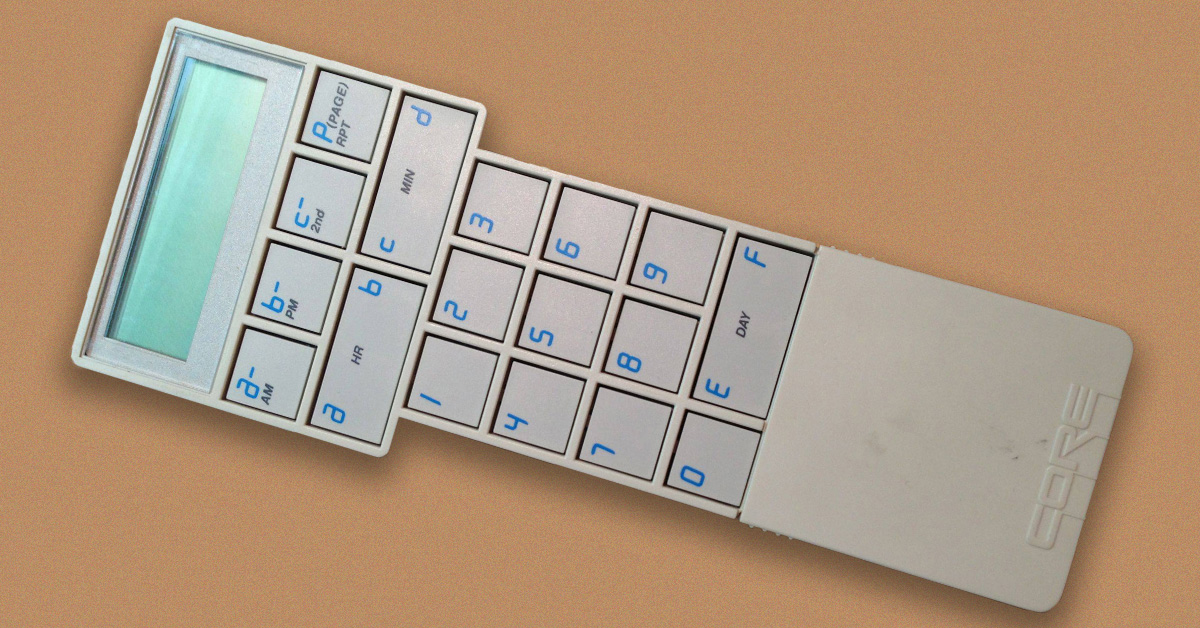 While Steve Jobs tried to reinvent the desktop computer with his NeXT, his erstwhile Apple cofounder Steve Wozniak set about building a better remote control. The CL 9 company name was a play on "cloud nine." This baby had 4-bit and 8-bit microprocessors. No wonder it looks like handheld computer.