You probably forgot these 19 celebrities all appeared on 'Happy Days'

Oscar winners and baseball Hall of Famers both took bit roles alongside the Fonz. 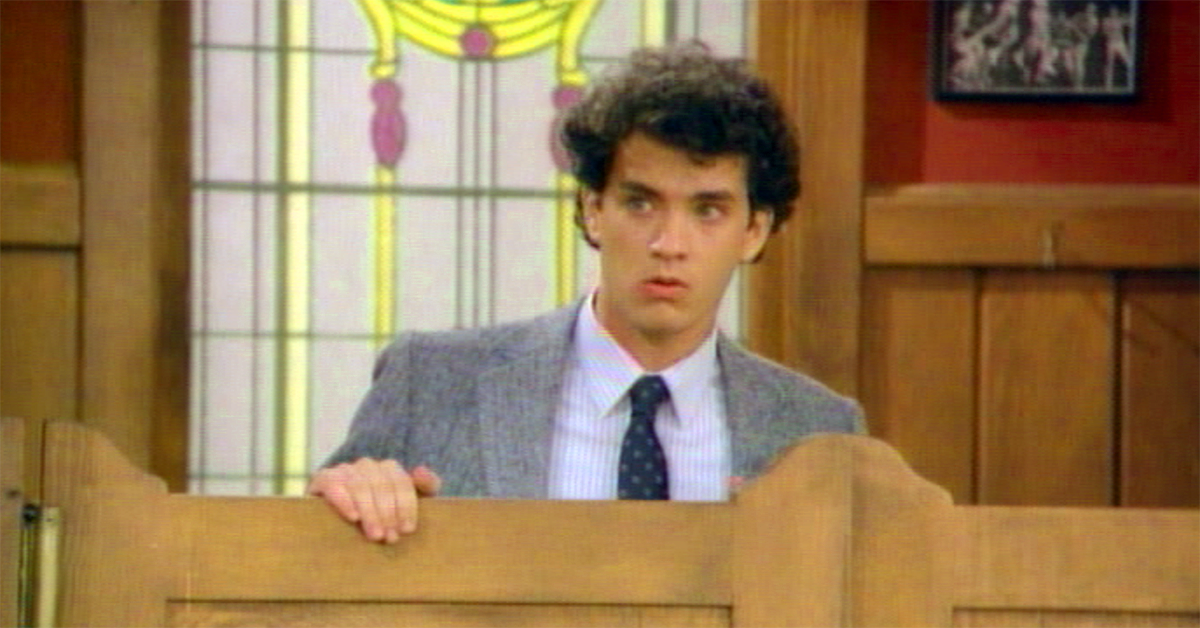 Happy Days aired 255 episodes. That's a lot of days to fill! The casting director must have been constantly working just to keep Arnold's filled with patrons. The sitcom also managed to score some major celebrity cameos — and provide breakout roles for budding celebrities.

Television legends of the 1950s turned up frequently. After all, Happy Days was all about the glory days of the 1950s. Let's take a look at some of the famous faces who turned up in midcentury Milwaukee. We'll tell you where to find them.

Do you remember all of these guest roles?

"My Favorite Orkan" and "Mork Returns"

To Happy Days fans, this seems obvious, but perhaps some younger people are unaware of the madcap comedian's starting point. "My Favorite Orkan" made Williams a hit overnight. It is often overlooked that he returned a year later for a second episode. 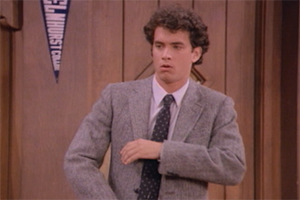 Dr. Dwayne Twitchell in "A Little Case of Revenge"

Month after his sitcom The Bosom Buddies aired its final episode, the up-and-coming actor appeared as a black belt who comes to settle a score with the Fonz. He is a karate master looking to pick a fight with the Fonz, due to a grudge tracing back to the third grade. It was the first time anyone hit Fonzie. 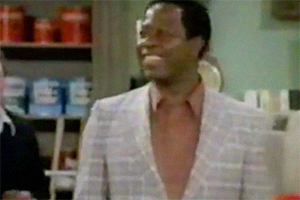 Himself in "The Hucksters"

Speaking of Hanks, here's one of the most famous Hanks. The baseball legend shows up to make a cameo appearance in Mr. C's commercial. "Hammering Hank wouldn't buy his hammer anyplace but Cunningham's Hardware." Though the episode aired in 1980, the retired Milwaukee Braves icon was portraying his younger self. 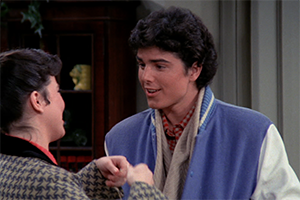 Binky Hodges in "Be My Valentine"

The erstwhile Peter Brady turned up in a Valentine's Day episode, as boyfried of Joanie's. After she gives him a crumpled card, he asks her to go make out at Inspiration Point. 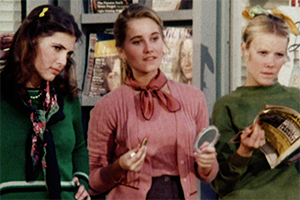 Peter wasn't the only Brady kid to end up on Happy Days. Marcia can be seen in a very early episode, as a cool girl hanging out on the street. Potsie, Richie and Ralph try to pick her up while cruising in a station wagon. 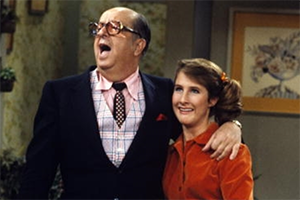 As we shall see, Happy Days was fond of casting beloved sitcom stars of the 1950s. The former Sgt. Bilko and star of The Phil Silvers Show played an elder relative of the perky Jenny Piccalo. 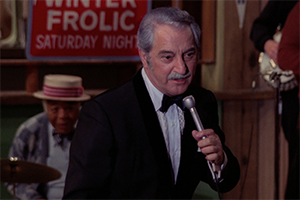 Another sitcom legend shows up to play a Cunningham. A few years earlier, the former Make Room for Daddy star made his television comeback in Make Room for Granddaddy. Here he got to play Richie's granddaddy. That's not Thomas' only tie to Ron Howard, of course. The Andy Griffith Show began as a spin-off from The Danny Thomas Show, which first featured the character of Opie in "Danny Meets Andy Griffith." 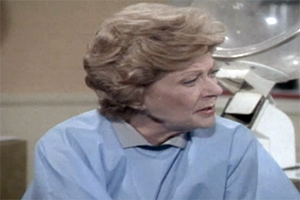 Hey, here's another '50s sitcom legend! Harriet of Ozzie and Harriet fame turns up as one of Mrs. C's friend in the beauty parlor. And she is not the only familiar TV face under the hair dryers… 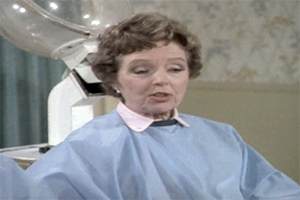 Flanking Marion Ross in the hairdresser scene is Wyatt, the mother from Father Knows Best! 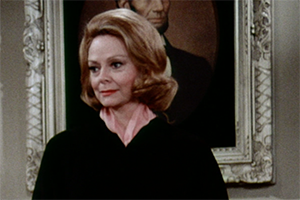 Once "Lost in Space" with her son Will, Maureen Robinson came back to earth to play a judge. 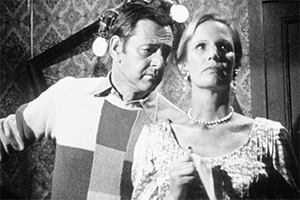 Uncredited Movie Star in "Not with My Sister, You Don't"

Here's a fun one. Best known as Felix Unger in The Odd Couple, Randall quietly made a surprising appearance in a movie within the show. Richie and his girl Carol head to the movies with Spike and Joanie, and Randall is starring in a werewolf movie. 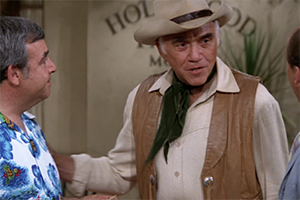 Himself in "Hollywood: Part 1"

Ben Cartwright turns up fully in Bonanza costume, as he is checking into the same cheap Hollywood Palms hotel where the Cunninghams are staying. 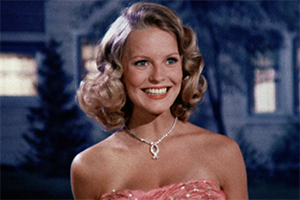 Cindy Shea in "Wish Upon a Star"

Not only did Happy Days feature TV stars of the past, some soon-to-be small-screen idols showed their faces, too. Here's a future Charlie's Angel, playing a movie star. Richie wins a date with her. 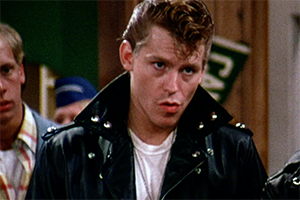 Rocko in "Richie Fights Back"

Everyone knows Conaway as the ideal greaser Kenickie in Grease (not to mention his role on Taxi). However, he essentially played the same characters years earlier on Happy Days! 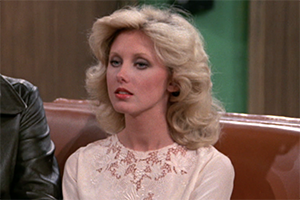 Cynthia Holmes in "My Fair Fonzie"

"Oh, I love history! It's so exhilarating!" she proclaimed to Fonzie. At the time, the blonde beauty was known for her acting on the soap Search for Tomorrow. 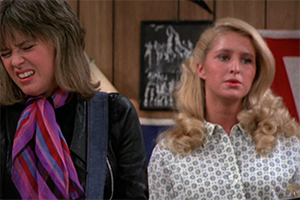 Gertie in "Fonzie and Leather Tuscadero"

Before she became the mother of socialite Paris Hilton, the young actress was singing backup behind Leather Tuscadero (Suzi Quatro) as one of the Suedes. 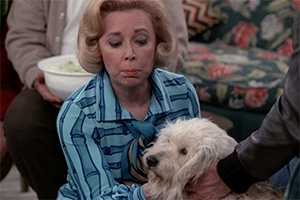 Even a dog sometimes needs a celebrity shrink. Dr. Joyce turns up to give Fonzie's pooch an emotional boost. 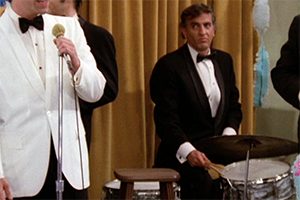 Drummer in "Fonzie's Getting Married" and "The Graduation Part 1"

Happy Days creator twice turns up behind a drum set on the series. Here, playing a school dance, Marshall does not seem too thrilled with the Fonz. He's just acting, folks! 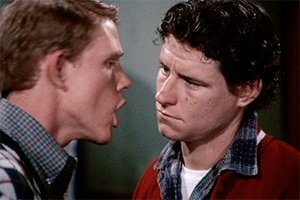 One of the Dukes in "Knock Around the Block"

This credit is listed on both his IMDb and Wikipedia filmographies. However, having just re-watched the episode, it doesn't look like the ace actor to our eyes. Besides, at the time, in 1974, Keitel was starring in Alice Doesn't Live Here Anymore and as Bugsy Siegel in Virginia Hill. Hard to believe he'd take an uncredited role as a gang member on Happy Days.

Delmo 31 months ago
They forgot to list John Hart as The Lone Ranger in "Hi Yo Fonzie...Away" 2/9/82.
Like Reply Delete

CheriBurnsed 32 months ago
What about the episode with the real Buffalo Bob & Howdy Doody? Although "Clarabelle" was probably not played by his original actor, "Captain Kangaroo"s Bob Keeshan!
Like (1) Reply Delete

Wiseguy 32 months ago
"The former Sgt. Bilko and star of The Phil Silvers Show played an elder relative of the perky Jenny Piccalo." Elder relative? He played her father. Also not mentioned is that Jenny was regularly portrayed by his daughter, Cathy Silvers.
Like (1) Reply Delete

KathyMcKinny Wiseguy 27 months ago
also this episode was the only time Cathy worked professionally with her Dad Phil.
Like Reply Delete

jvf 32 months ago
For No. 11, if memory serves correctly, the woman is played by Cloris Leachman.
Like (1) Reply Delete

Wiseguy jvf 32 months ago
Unlikely. Tony Randall made the appearance as a favor to Garry Marshall since he was also starring in a Garry Marshall series on ABC for Paramount (The Odd Couple). Why would an Academy Award® winning actress appear uncredited in a brief scene on a program unrelated by production company, creator or network she was currently starring in (Mary Tyler Moore on CBS)?

RkBke 32 months ago
what about Laurette Spang? Cassiopiea on battlestar Galactica!
Like Reply Delete

Mark 32 months ago
How could you ever forget Robin Williams in Happy Days? That episode was the birth of Mork from Ork. It was also used in the pilot episode of Mork and Mindy as well, when Mork tells Mindy about his first trip to Earth.

I certainly never forgot Maureen McCormick when she drew all over Richie's face with red lipstick. He and his friends were trying to find out what flavor it was.
Like (1) Reply Delete

Wiseguy Mark 32 months ago
He's number one in the article.
Like Reply Delete