The man who played Cannon played a unseen part in the legacy of Star Wars, Buck Rogers and The Fugitive. 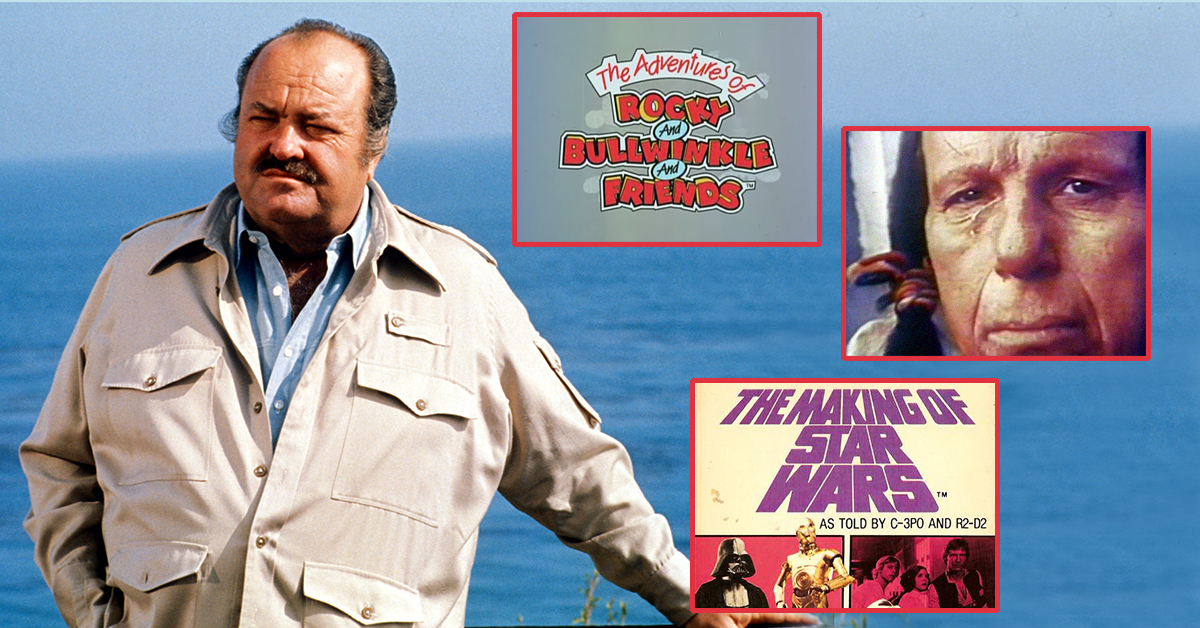 As the star of Cannon, William Conrad made for one unlikely — and awesome — action hero. Heavy set and middle-aged, Cannon was quick to apply rough justice on criminals. The detective would climb out of his ice blue Lincoln Continental and slap around a hooligan without second thought. He even had a trademark fighting move — the Cannon belly bump.

While Conrad was a wonderful physical actor, his long career was perhaps reliant on his deep, authoritative voice. He began, naturally, in radio, most notably as the star in Gunsmoke. His Marshal Matt Dillon was deemed better heard than seen, however, and the role was recast with James Arness when the show made the leap to television.

But Conrad would get a chance to quietly — well, not "quietly," more surreptitiously — work on the Gunsmoke TV series years later. He narrated an episode in the 19th season. That was just one of his many notable and overlooked voice-over gigs.

Here are some more projects you will probably fondly recall from your childhood. Yes, Conrad was the narrator in all of them. 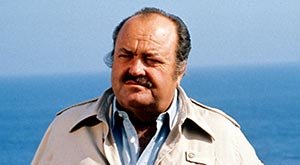 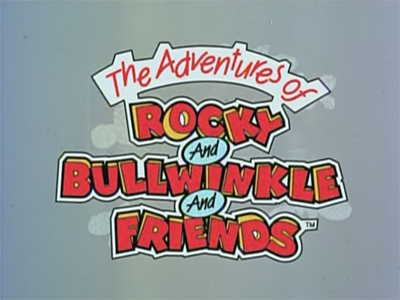 Rocky and His Friends, better known as the The Rocky and Bullwinkle Show, lovingly spoofed the old film serials of cinemas earliest days. There was a dastardly villain tying damsels to railroad tracks. Each episode ended with a cliffhanger — over which William Conrad would announce two potential titles, something along the lines of, "Be with us next time for 'Avalanche Is Better Than None,' or 'Snow's Your Old Man!'" Half a decade later, Batman would do a similar thing. But it seemed funnier in Conrad's stentorian voice. 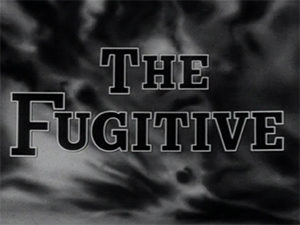 A train speeds through the night. "Name: Richard Kimble. Profession: Doctor of Medicine. Destination: death row," Conrad declares, as Kimble gazes at his reflection in the window. "Richard Kimble ponders his fate, as he looks at the world for the last time… and sees only darkness." The locomotive derails! The chase is on! Each episode of this perfect thriller opened in the same manner, and it grabbed you by the guts each time. Conrad helped set the tone as much as the noir poetry of the opening. 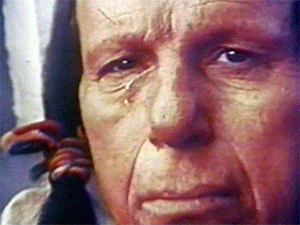 His name was Iron Eyes Cody, but he was best known for shedding a single tear. The actor became a pop culture icon in the 1970s due to this lasting anti-pollution PSA. As Cody paddled his canoe through the filthy waters alongside a factory, Conrad intoned, "Some people have a deep, abiding respect for the natural beauty that was once this country… and some people don't." Cut to some jerk in a speeding car, throwing his trash out the window at Cody's feet. Cue the crying. Without Conrad's affecting narration, it would have seemed sillier. 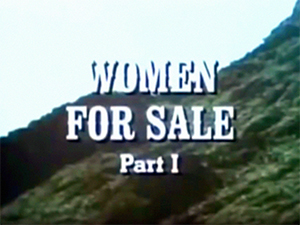 In season 19, two decades after he was passed up for the role of Matt Dillon, Conrad lent his voice to the two-part tale "Women for Sale." For those familiar with the radio series, it must have been weird to hear Matt Dillon 1.0 narrating a story for Matt Dillon 2.0.

5. The Making of Star Wars 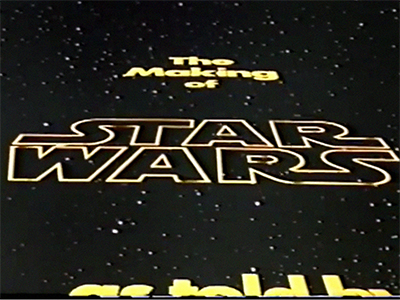 After the unpredictable, unprecedented blockbuster of Star Wars, there were loads of specials to continue mining its success. On September 16, 1977, mere months after the original theatrical release, ABC aired this behind-the-scenes look at the movie. It was billed as "The Making of Star Wars …as Told by C-3PO and R2-D2," but William Conrad was the true narrator. In his warm leather voice, Conrad detailed the creation of the sci-fi spectacle. It was one of the earliest demystifying documentaries of this kind, one that inspired thousands of children to become filmmakers themselves. Oddly, Conrad's original narration was replaced on the VHS version.

6. Buck Rogers in the 25th Century 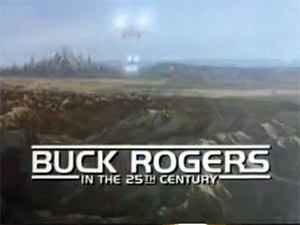 Already linked to the Star Wars universe, Conrad was the obvious choice to narrate this small-screen space adventure that followed in its wake. If you needed to explain a concept or backstory in 30 seconds, Conrad was your man. We miss when TV shows would clearly explain themselves like this. "For 500 years, Buck Rogers drifted through a world in which reality and fantasy merged into a timeless dream," Conrad proclaimed each week in the opening credits. 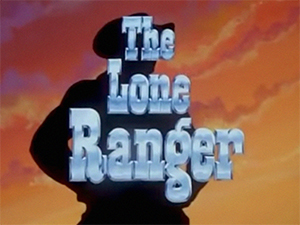 Conrad returned to his cowboy roots in this cartoon reboot, part of The Tarzan/Lone Ranger Adventure Hour. Few have ever been better at blurting, "Hi-Yo, Silver! Away!" Not only did he narrate, he played the Lone Ranger, as well.

The crime-solving adventures of a shape-shifting man, Manimal was pure, delicious 1980s cheese. It opened with the roar of a panther, but Conrad was the real beast behind the microphone, providing uncredited narration for the action hour. 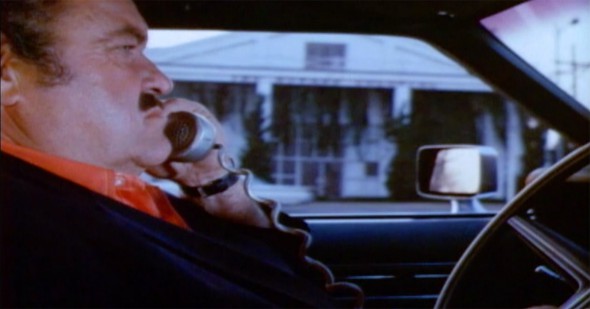 Did you know?Fall 2017
These 6 cool TV detectives had car phones decades before you did

CouchPotato19 10 months ago
Not only a great and sexy voice, but he was a hottie, as well!! Big stud!
Like Reply Delete

Jesse 10 months ago
He also did narrated an animal show. I think it was called Wild Wild World of Animals. Something like that. It used to run on public stations in reruns.
Like (1) Reply Delete

CouchPotato19 Jesse 10 months ago
1977 World Series highlights on VHS. I think he narrated that.
Like Reply Delete

VBartilucci 10 months ago
Not to mention the Invaders - "How does a nightmare begin?"
Like (1) Reply Delete

Danwanda 11 months ago
This guy was all class ! I am addicted to this show! I get up super early to watch! Thank You MeTV!
Like (1) Reply Delete

JackBagley 22 months ago
He was reportedly bitter about being passed over for the TV version of "Gunsmoke" because of his weight. But he handled it like a true professional, and it wasn't as if he was going to be out of work or anything.
Like (1) Reply Delete

mariano965 24 months ago
Anything he narrated was given more class just from voice alone....
Like (1) Reply Delete

EricEdmond 26 months ago
I have seen cannon some, but I love the Fugitive and I just realized he was the narrator a few days ago. Then, last night, Buck Rodgers came on TV on MeTV, of course, and I don't like the show, but I just so happened to hear the opening narrative and was like wow I knew it had to be him then as well. He doesn't seem to pop up in many old black and white shows, but I have seen him I believe but don't quote me, on Hitchcock hour or half hour, maybe 77 Sunset Strip and I swear something else I just saw him in, but can't remember. I know the voice though.
Like (1) Reply Delete

MarkSpeck 27 months ago
Buck Rogers was produced by Glen A. Larson. This led to Conrad having an association with the producer throughout the '80's. He did the "Fall Guy (or Cover-Up, or Automan, or whatever show) will be right back!" and "Next on (insert show name)" announcements, as well as doing the introductory narration on Larson's 1988 series The Highwayman.

He also played himself on a Fall Guy episode entitled "Private Eyes", along with Mike Connors and Barry Newman. They ribbed each other all through the episode as to who was the better driver/fighter/kisser, etc.
Like (1) Reply Delete

a16djf 28 months ago
Loved the way he was not afraid to make fun of his weight on “ Cannon”!
Like (1) Reply Delete

TVJunkie 41 months ago
This guy is just too cool. He looks like he could break your neck, not care and never break a sweat. The voice would convince you too. Where among today's crop of actors is there one such as he ?
Like (2) Reply Delete