Where To Watch Shop Store Contact
Home / Stories / This is the man behind the mask of all those '60s and '70s TV creatures
did you know?

From 'Star Trek' aliens to a much more literal kind of monkey business on 'Perry Mason.' 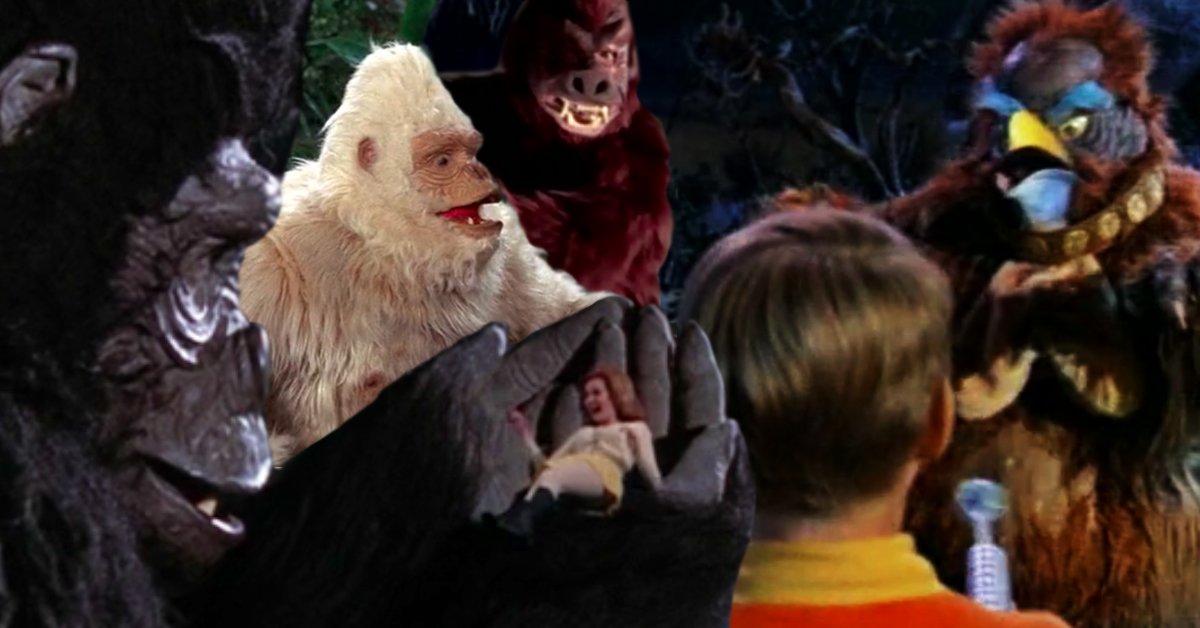 Most people don't recognize the Hungarian actor and stunt performer Janos Prohaska by name, or even by his face. That's because for most of his career in film and television, he was the man inside the suit of a wild assortment of critters, from angry gorillas who escaped from the zoo to wildly creative sci-fi creatures whose movements the actor made iconic on shows like Star Trek, Lost in Space and The Outer Limits. In the '60s and the '70s, he was the brains behind beast after beast on classic TV.

Prohaska didn't just step inside these suits, either. He created them, with a realistic attention to detail that mystified audiences, especially on shows where you wouldn't expect to see fantastic beasts or unusual animal appearances, like sitcoms or serious dramas. 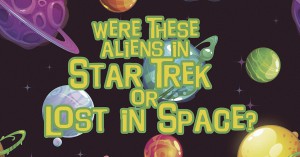 Are these aliens from 'Lost in Space' or 'Star Trek'?

One of the few times Prohaska actually did appear on TV and actually show his face wasn't for any hairy role he'd accepted, but on the game show What's My Line? In the episode, he arrives as a contestant in a gorilla suit like you'd expect, but removes the suit once it's time to start playing.

Below, we've collected some of Prohaska's most memorable TV monsters into a freak show you can peep for free. See how many of these aliens, black bears and apes you remember rearing up on your screen back in the day. 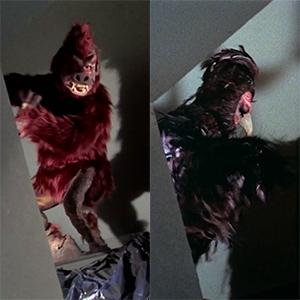 Prohaska was a stunt man in four episodes of Star Trek, showing up as the blobby Horta in "The Devil in the Dark," the horned, spiked ape creature the Mugato in "A Private Little War," and the rock-like alien being Yarnek in "The Savage Curtain." And while all those appearances are great, it impressed us to learn the actor also was involved in the rarely aired pilot "The Cage," where he plays two parts in one scene: an anthropoid ape and a humanoid bird, both shown here, designed to terrify.

2. Debbie the Bloop on Lost in Space

For the Lost in Space episode "The Oasis," there's a fruit being passed around that has dangerous consequences for anyone who eats it. Unfortunately, Dr. Smith helps himself and feeds it to Debbie the Bloop, resulting in this little dance that rightly intimidates the Robinsons. 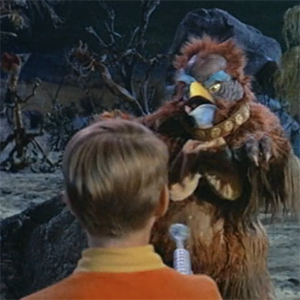 Prohaska also appeared in the Lost in Space episode "The Forbidden World," this time as yet another scary bird creature. Do we even have to say it? All right, just in case: Danger, Will Robinson! 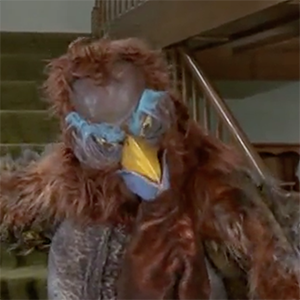 Prohaska got a little extra mileage out of his Lost in Space bird suit when he showed up twice on Bewitched as the supposedly extinct Macedonian Dodo Bird. The biggest threat the bird posed this time, though, was that Endora was viciously allergic to the thing. The stunt man also appeared in other episodes of Bewitched, once as a gorilla and then another time as a bear.

5. Gorilla on Land of the Giants 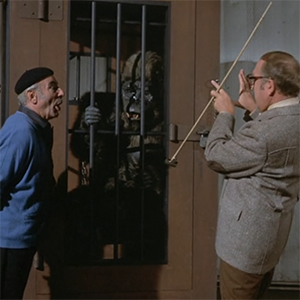 Speaking of gorillas, it's perhaps the creature Prohaska morphed into the most over his career. On Land of the Giants, he played a gorilla twice, with his first appearance shown here in the 1969 episode "Comeback." As you can see, he's rather harmless, being that he's behind bars when he's introduced in this one.

6. Bobo on Land of the Giants 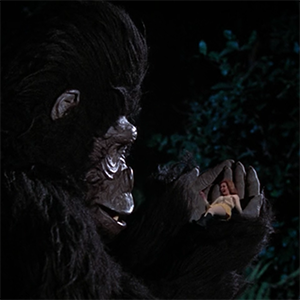 It's in the Land of the Giants episode "The Marionettes" that Prohaska's monkeying around gets the most out of hand. He plays an enormous ape who helps to capture the Earthlings who must flee after trying to do a good deed that absolutely does not go unpunished.

7. Darwin the Monkey on The Outer Limits 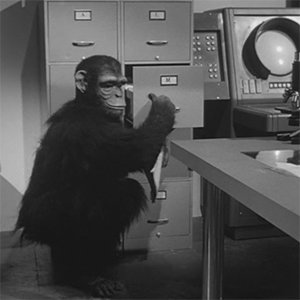 Not to be outdone by other sci-fi shows, The Outer Limits also utilized Prohaska's unique talents in the episode "The Sixth Finger." This time he plays a genius monkey named Darwin who serves as an assistant to a twisted scientist who's bent on speeding up the human evolutionary process.

8. The Mikie on The Outer Limits 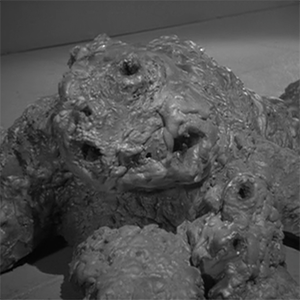 The Outer Limits invited Prohaska back in 1965 for another episode. This one was called "The Probe," and it calls to mind some of his earlier creatures the stunt man embodied for Star Trek. Called "The Mikie," this blobby being is an alien microbe that attacks the survivors of a plane crash.

9. Olga the Dancing Bear on The Munsters 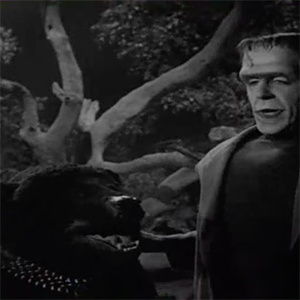 For The Munsters episode "Herman's Child Psychology," Prohaska appears in one of the other creatures he's been known to become: a black bear. As Olga the Dancing Bear, the stunt man got to explore a gentler side of his beasts, though, as an escaped dancing circus bear. His face is so cute, he's basically a teddy bear. 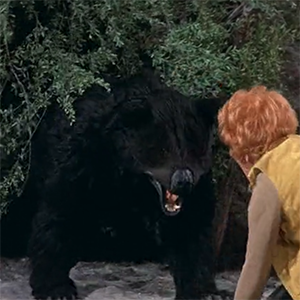 On Here's Lucy, Prohaska appeared twice as a black bear. The scene you see here is from the 1971 episode "Lucy and the Mountain Climber," which finds Lucy scaling mountains and Prohaska's black bear giving her quite a scare! That's likely why two years later when Lucy needed another bear on the episode "Harry Catches Gold Fever," she didn't need to be reminded to give Prohaska a call. 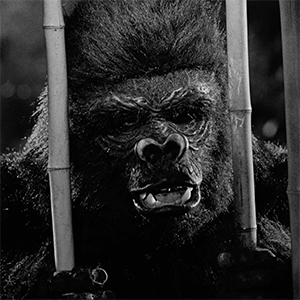 Plenty of sitcoms found reason to pull monkeys into their plots and this is just one example out of five times Prohaska appeared on Gilligan's Island as various apes. For the episode "Diamonds Are an Ape's Best Friend," Prohaska plays a gorilla thief who steals away with first Mrs. Howell's diamond brooch, then Mrs. Howell herself!

We couldn't resist including this memorable Gilligan's Island episode, "Our Vines Have Tender Apes." Not only was it Prohaska's final appearance on the island, but it also featured Denny Miller as Tarzan. After the gang goes through multiple encounters with the vine-swinging man raised by apes, they're startled by this moment when an actual ape shows up to save his feral friend. 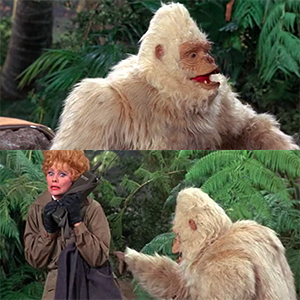 But we have to double back to recount Prohaska's first episode of Here's Lucy, "Lucy's Safari." It's one of his most spectacular gorilla suits yet, as a rare white ape that's supposed to be a cross between a gorilla and a baboon. He escapes from the zoo, and suddenly Lucy's the one in need of a great escape.

Perry Mason is a serious drama, and one of the last shows you'd expect to stuff a man inside a gorilla suit. And yet for the episode "The Case of the Grinning Gorilla," that's exactly what the plot called for and the series knew just who to ring up: Janos Prohaska. In the episode, he plays a furious gorilla causing a ruckus in a window that gives Perry Mason a different reason to pause before proceeding.

LynCarceo 9 months ago
Did he also appear in Voyage to the Bottom of the Sea? There was at least 1 white ape in that show.
Like Reply Delete

daDoctah 23 months ago
You left out the role I know Prohaska best for: the Cookie Bear on the Andy Williams Show. Every week, he'd show up on the set and try to trick Andy into giving him cookies. (He also brought the Cookie Bear character to a guest appearance on Pat Paulsen's Half a Comedy Hour.)
Like (1) Reply Delete

VBartilucci 39 months ago
The microbe suit from Outer Limits was the base for the Horta costume. The story goes that he just showed up at the production office, but the suit on, shambled around a bit, and they wrote the episode around the suit.
Like Reply Delete