Peggy Lipton was the coolest girl around

We all wanted to be Julie Barnes. 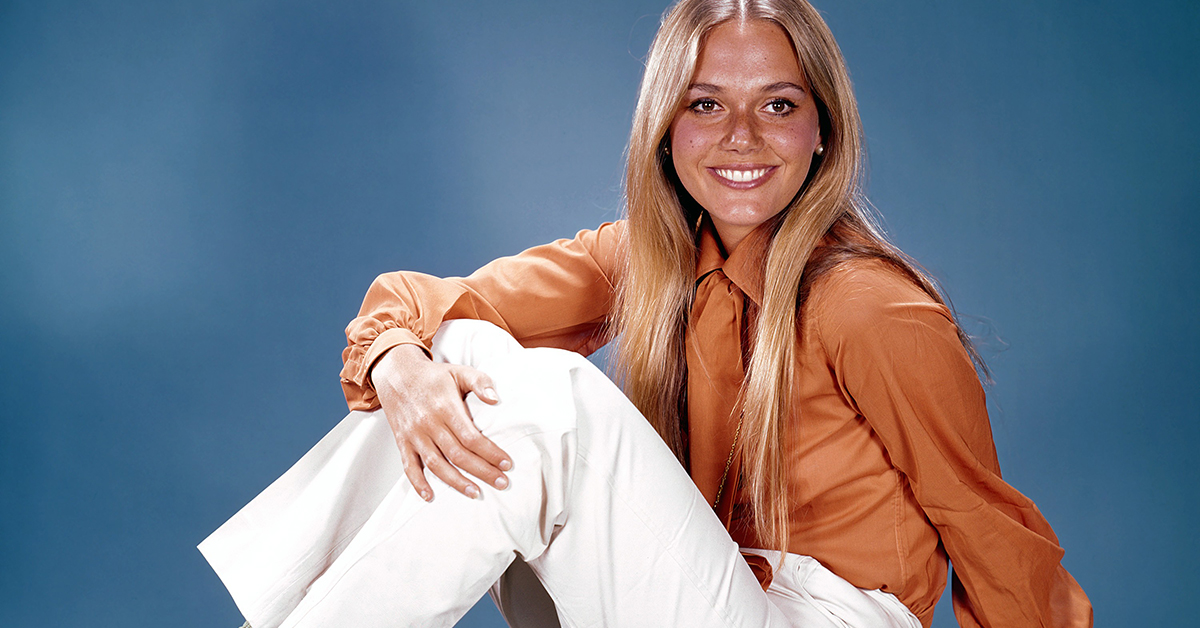 The 1960s recall a time of flower power, love beads, bright colors and laidback cool. No one epitomized that like Mod Squad actress and fashion icon Peggy Lipton, who seemed to float through the '60s with an air of sophistication and easy elegance special to a certain type of California girl. Though her career in acting mostly started and ended with The Mod Squad — she stepped away from the limelight in the '70s to raise her daughters and didn't really come back until the '90s — Julie Barnes remains an important cultural fixture.

Sadly, Lipton passed away this past weekend at the age of 72. She will always be the ultimate cool girl. Here's why.

1. Her natural grace was evident at an early age. 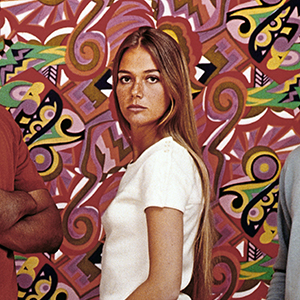 Lipton's parents helped her get into modeling and she had no trouble securing jobs. She signed with the Ford Agency when she was 15 and enjoyed plenty of success. When she moved with her family to L.A. in 1964, she almost immediately started working with Universal Pictures.

2. She took to California culture right away.

Lipton grew up on Long Island with conservative parents and two brothers, so their move to California might have overwhelmed a less adaptable person. But Peggy had no problem fitting into her new lifestyle. She described her California self as a typical “Topanga Canyon hippie.” She got into meditation and yoga, and lived on rice cakes and cottage cheese.

3. She had guest roles in some of the most popular shows of the time. 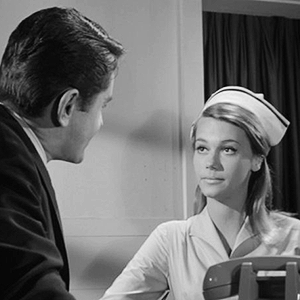 Lipton landed her first TV gig when she was 19 on The John Forsythe Show. She went on to appear on programs like Bewitched, The Virginian, The Invaders, The F.B.I. and The Alfred Hitchcock Hour (pictured here).

4. She acted opposite a young Kurt Russell in her first movie.

In the 1966 Disney film Mosby’s Marauders, Lipton played a young Confederate girl who falls in love with a Yankee soldier, played by James MacArthur. Russell played her brother.

The Mod Squad was Peggy's big break. Every girl wanted to be Julie Barnes and every guy wanted to date her. With her trademark middle part, long hair, miniskirts, wide-leg pants and long jackets, she epitomized 1960s counterculture cool and became an immediate fashion icon.

6. She could even make the less-than-stellar outfits look chic.

Take this paint-covered smock and weird hat, for example. What would look frumpy on the average person looked totally fashionable on Peggy, who was naturally waiflike and elegant, and had the ability to make any garment seem like the next big trend.

7. She dated some of the biggest stars of all time. 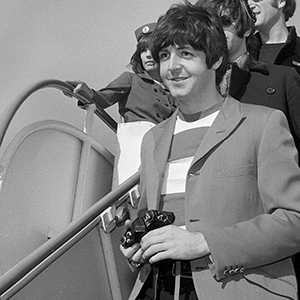 Lipton’s publicity team set her up with Paul McCartney and the two enjoyed a short-term relationship that led to intense media speculation from Beatles fans. She also briefly dated Elvis, Terence Stamp and Lou Adler.

Lipton admitted in her autobiography that it was hard to enjoy the success of The Mod Squad due to feelings of deep insecurity. She still saw herself as an awkward Long Island teenager with a stutter and crippling shyness. But that never never hindered her performance – in fact, she was nominated for four Emmys and won a Golden Globe for playing Julie Barnes.

9. She had a brief career in music. 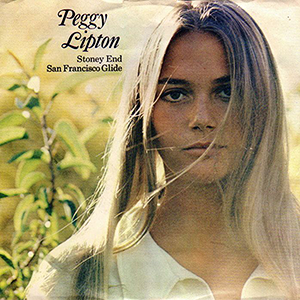 She enjoyed some success as a singer, with three of her singles landing on the Billboard charts: “Stoney End,” “Lu” and “Wear Your Love Like Heaven.”

10. She made her singing debut on 'The Hollywood Palace.'

“She is now. She’s where it’s at.” That’s how guest host Sammy Davis, Jr., introduced Lipton on a 1969 episode of the variety show. She sang solo before joining Davis for a duet. Watch it here.

11. She married who she loved despite controversy. 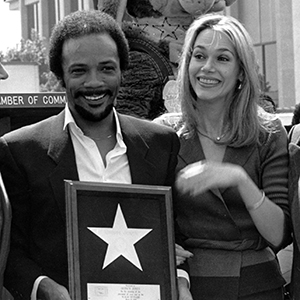 When Lipton married Quincy Jones in 1974, interracial marriage was still considered taboo. Even Peggy’s mother was shocked that her daughter married out of race and religion (the Liptons were Jewish). But she didn’t care, and her love for Jones proved a lasting one — though they divorced in 1990, they remained close.

Peggy had two daughters with Quincy Jones: Kidada, an actress, model and fashion designer who had a line for the Walt Disney Company called Kidada for Disney Couture, and Rashida, an actress known for her roles on The Office and Parks and Recreation. Peggy filmed a Verizon commercial with Rashida and played her mom in an episode of the TBS show Angie Tribeca. 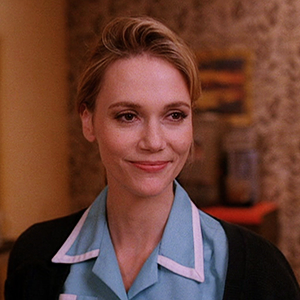 Though she made some minor appearances along the way, including The Return of the Mod Squad in 1979, her first big return to acting was in David Lynch’s seminal 1990s drama Twin Peaks. The show — a monster hit in its first season that was canceled due to poor ratings in season two — has maintained a devoted cult following and returned to Showtime in 2017, with Lipton reprising her role as diner-owner Norma Jennings. Only Peggy would pick such a cool show for her return to the screen. 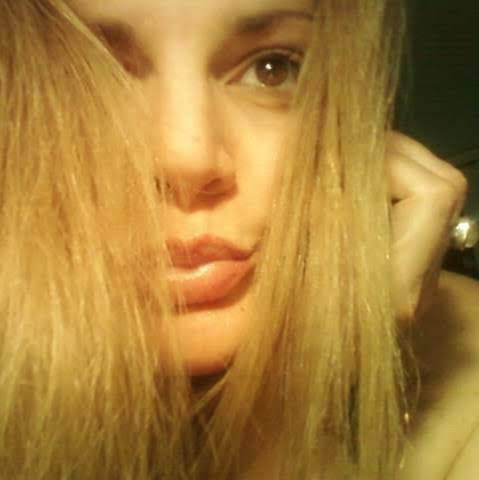 Lisa 30 months ago
She was the sign of *Virgo* as am I. I will be 60 in September... I adored Peggy Lipton and her character Julie both when I was younger and as I grew, and to this day still wear my hair long and straight. (The user photo here is of me at age 56, my daughter insisting I "still look good" for my age and to upload it despite my protestations). Peggy Lipton's demeaner and personality as shown through Julie on The Mod Squad, (my favorite show back then) indeed exemplified her own personality which radiated through and which I looked up to as I hadn't any older sisters. Growing up with 3 hippie brothers in the 60's and 70's was so enlightening for me, the young sister and flower child. Those were days that were truly some of the best for me as a young girl to teen.
Like (2) Reply Delete

JessicaEFulcher 42 months ago
My real time work with facebook Im making over $2000 a month operating low maint­enance. I continued h­earing distinctive people divulge to me how an lousy lot cash they can make on line so I selected to research it. All topics considered, it become all legitimate and has without a doubt changed my life. For more statistics visit below site
↓↓↓↓COPY THIS WEBSITE↓↓↓↓

Joe 43 months ago
Peggy also proved that she could do comedy during her 2007 appearance on Rules of Engagement as the "flower child" mother to the character, Adam.
Like Reply Delete

BrittReid 43 months ago
R.I.P. Peggy. You were a hottie on the Mod Squad.
Like (2) Reply Delete

Brian 43 months ago
The Mod Squad was a HUGE hit TV show. I don't remember any other TV shows of that era, besides Laugh In, being talked about during the next school day by everyone.
Like Reply Delete

UTZAAKE 43 months ago
5. "Every girl wanted to be Julie Barnes..." My oldest sister was one.
12. Unfortunately TBS' Angie Tribeca was canceled last Thursday, two days prior to her death.
RIP Peggy Lipton.
Like Reply Delete

dangler1907 43 months ago
I will forgive her for living on "rice cakes and cottage cheese". But I thank her for inspiring me to find and marry a "canyon hippy" with long, blonde hair, blue jeans and bare feet.
My version of Peggy Lipton was my best friend and partner for nearly 50 years and I never regretted a day. Thanks Peggy.
Like (2) Reply Delete